Get to Know a Chef: Graham Pratt, The Gabardine

After spending most of his career in one of the city's beloved kitchens, chef Graham Pratt decided it was time for a challenge. A seeming twist of fate led him to Bay St. favourite, The Gabardine, serving comfort food that appeals to more than just the suits. Pratt shares his experience leading a new team, designing a menu that fits, and what he thinks of Toronto's restaurant scene.

I think so. I remember when I was in grade one, there was a day where you could dress-up as what you wanted to do when you were older. You could be an astronaut or a cowboy, and I don't know why, but I chose chef. When I was in high school, I cooked a lot at home, and then I started working when I was about 14 as a dishwasher because I wanted to work in a restaurant. And by the time I was 18, I realized I had no other choice because I didn't really work on school, so I just decided to keep doing it.

Most of my career was at Mildred Pierce. I was there for about two and a half years, left for about nine months, and came back for another three years. I haven't worked in a million different places like other chefs; Mildred Pierce was comfortable and they promoted a lot from within. When I was 20, I was on the front line, and it was a great learning kitchen. I remember once when I was pretty young there, I felt like I was being picked on by the chef, and I just didn't get it. But it was because I was worthwhile, and I was always being challenged. It was easy to work there because it was really well set up, and you could work at different points in the day. 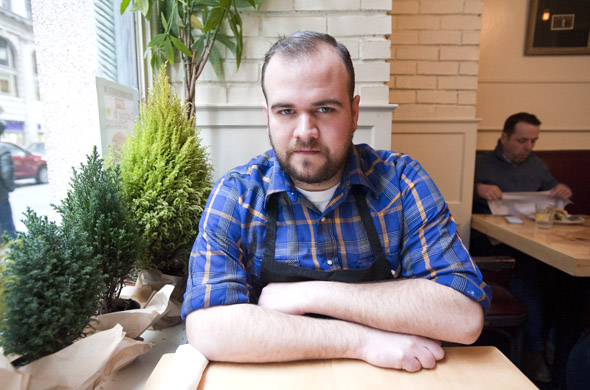 What was the biggest lesson you learned there as a chef?

The importance of working clean and organized, and of being committed to your work and owning it. If you're on a station, that's yours. Also, taking pride in your work, and just generally being responsible.

What brought you to the Gabardine?

A hairdresser that I knew also cut one of the owner's hair. She sent the owner an email about me because they were opening this place and looking for a chef. I thought it was a Bay Street sandwich type of place, and I basically forgot about it. Then my old boss, Rodney Bowers, had come here to look at the space himself and the owners had just acquired it. They knew each other from the Rosebud, and at some point they brought him on to consult. He texted me about it, and I was at work, but I just phoned him right away because I wanted to do something that was my own and take that challenge. You can go and work through a million restaurants and never get promoted; you have to be confident enough to just take the job. So I called him right away, and he told me about it, and I felt like if it was the same thing, it had to be fate.

Do you have a signature dish at the restaurant?

Our mac and cheese sells a lot, but it's not exactly something I would want to be a signature dish. The owners had many ideas. They had gone to a lot of restaurants for inspiration, and they had things they wanted for sure: deviled eggs, mac and cheese, a burger, and other standards. I worked on the menu with Rodney, and I knew I had to leave certain dishes, so it was about making stuff ridiculous and something we could stand behind. So we just worked on making the cheesiest mac and cheese we could, and it's over-the-top. I still can't believe people eat it and go back to work.

One thing that we ran that people freaked out about was Korean fried chicken. I love it, and I wanted to do it properly and people would come here just for it. That would be more of a signature-type thing that we did after we opened, and then I saw other restaurants doing it more, so I stopped.

Is there a type of cuisine that you gravitate towards?

It depends on what I'm eating and what I'm focusing on at the time. I kind of dive into certain types of cuisines for a while, and then eventually I get tired of it. I hate doing stuff that's necessarily "trendy." Years ago when I was at Mildred Pierce, I was doing Latin American type of stuff, and now that it's so popular we do the odd thing that's like that, but I'm trying to steer away from it. I think with Korean stuff, you can get away with being a little less authentic, because many people here don't eat traditional Korean food, unless you're Korean, of course. Right now, I want to focus on more classic comfort foods like what we opened with--French stuff--and just cooking things a little simpler. I don't want to dilute everything with elements from other cultures, because I think things should be authentic. 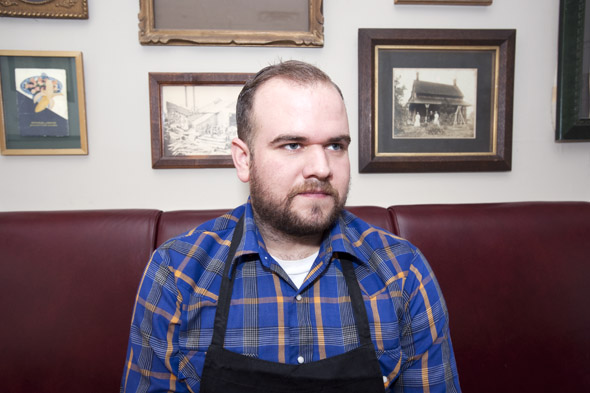 Do you get tired of cooking the standard dishes? Anything in particular that you don't like to cook?

It gets repetitive, and I'm sure the line cooks get sick of things. I just always try to make something better since the last time, instead of just resenting it. As a brunch cook, you would stand in one spot for four hours and just cook 600 eggs. The only thing on the menu that I would like to change here would be our black cod. I don't hate cooking it, but we've done a lot more fish specials that are really interesting.

Where would you like to see yourself go as a chef in this restaurant?

Hopefully expand if the company can do it. I think with any restaurant job you eventually get tired of any of it. Some people stay at a place for a really long time, but I think it's important that if you get to that point, that you put someone else in your position who's going to embrace it the way you did it when you first started. That's what I would like to see eventually.

Any plans to open your own restaurant?

Not in the near future. I think it's a bad time to do it; it's over saturated, and it's almost like buying a house. Many restaurants aren't going to last, and it's not because they're not good restaurants; it's just that there are too many. And everything now is almost theme specific; you can't open a restaurant that's just a restaurant. It gets people in, but eventually something else comes up and people move on to that. The food scene has changed in this city, and I think there needs to be some more classic places that won't change but are still innovative. 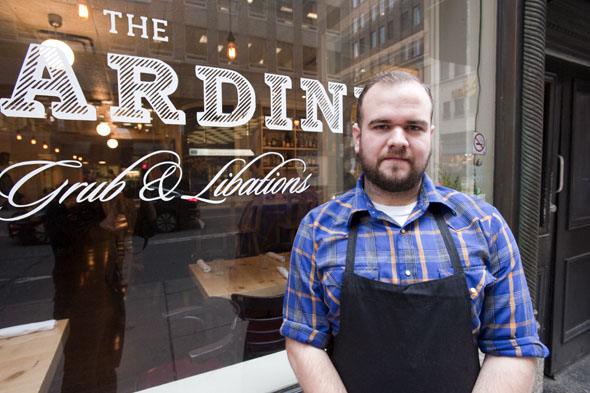 A chef that inspires you? David Chang

What would people be surprised to find in your fridge? Leftover tuna casserole

One food trend that needs to end? Watered-down Asian and Latin American food