Get to Know a Chef: Johnny Prassoulis, Holy Chuck

Not just another addition to the city's never-ending burger war, midtown favourite Holy Chuck burgers established itself as a serious contender. Only a year-and-a-half in, chef Johnny Prassoulis says he has regulars all over the GTA come in for "quality that's worth the trip." During our recent chat at the restaurant, Prassoulis addresses the whole "half-breed" fiasco and teases about his future plans.

Yes, I've always had it in me since I was a little kid. I've always loved to cook; my mom was a great cook, my grandmother was a fantastic cook, and I'm Greek, so we love to feed people.

It was probably when I started off with Michael Bonacini. I did a very brief stint at Auberge du Pommier and then helped work at Steak Frites on Mount Pleasant and Eglinton. There was a lot to be learned there and you really had to produce quality.

Why did you decide to open a burger joint?

I've been in the business, just around the city, as a chef. I've worked at different places and I've always had a love for burgers. It's something that's been around for a long time and I believe will always be around. I saw this craze in burgers and no one was doing it right, except some chefs at home. And then I went around one day and tasted many burgers in the city and I was like, I can do this better. 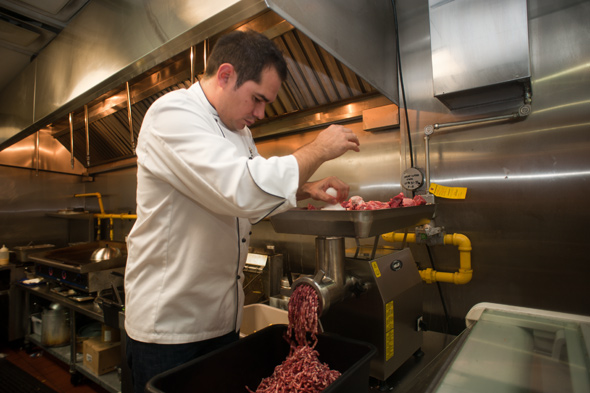 What are some mistakes that you've made along the way? What about the half-breed fiasco?

I wouldn't say the whole "half-breed" thing was a mistake because it pertained to the burger and made sense for the product. I don't have any regrets because I'm not a racist person. I'm a business man, and I wouldn't be openly racist to a certain ethnic group on my menu. I wouldn't do that and why would anyone else?

Do you see the gourmet burger trend slowing down?

You see a lot less burger places popping up, and a year ago there were a lot more. But I think now people are realizing who actually knows what they're doing and who's just opening up a burger place to jump on the bandwagon. People think burgers are easy, but they are a hard thing to master.

What makes a great burger in your opinion?

Definitely the meat. It's all about technique with how the meat is processed and put onto the plate. You could have an amazing piece of meat in any form, but if you don't know how to cook it properly, you're not going to get the right result.

Who makes your favourite burger in the city?

I've been to maybe eight or nine places, and I found The Stockyards makes a really good butter burger. I go there sometimes for their chicken, and a couple of them come here for our burgers. For an actual grilled burger, there's a place just further down from here called The Monk's Table and they actually make a pretty good one too. I've still been meaning to try Marben's and Nota Bene's burgers. 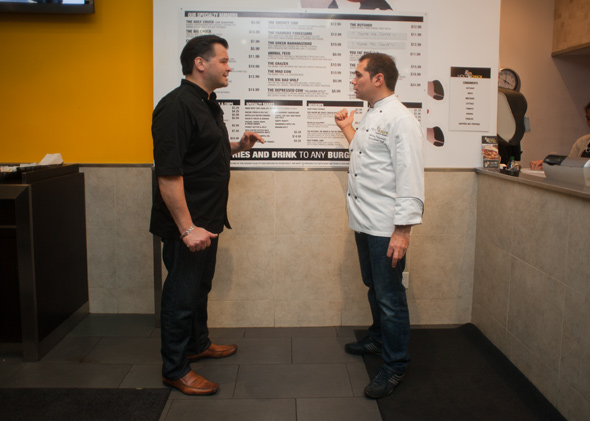 How many burgers do you eat in a typical week?

I try not to eat so many now, but before I would be eating four or five a week. But if you start taking into account the changing menu and the specials, I'm constantly cooking burgers and trying new things, so you could add a couple there.

I created the "Holy Chuck" because I just love the cheese, the caramelized onions, and the bacon. Now, I switch it up from time to time and maybe put a little ketchup and mayo, but I don't go crazy...though, maybe some foie gras. Bacon on everything and foie on everything!

Is there anything that shouldn't be on a burger?

I hate relish and barbeque sauce on a burger. I think they're very dominant flavours that if used too much, can really take away from the flavour of the meat.

Any expansion plans? What can you tell us about what's next for you and the restaurant?

I'm actually looking for a location right now. I've looked at one in the west end and one north of here. I'm hoping we can open our second place in a few months. I want to be everywhere at some point, but I'm not going to franchise--at least I don't think I will.

I'm also working on a new menu and on January 6 next year, I'm opening on Sundays. A lot of our customers are telling us that they want to come in more often but Sundays are the only day they can. And it'll probably be limited hours, but I'm putting out the new menu then as well, and we'll have items like a blue cheese burger. 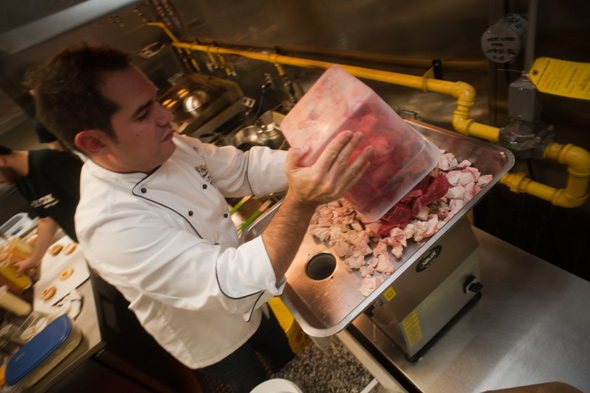 A chef that inspires you? Bourdain and Martin Picard

One dish you can't live without? Whole lamb on a spit

Something people would be surprised to find in your fridge? Wonder bread

What's one food trend that needs to end? Shawarma