Get to Know a Chef: Aki Urata, Kinton Ramen

While ramen may seem like a new phenomenon here, chef Aki Urata has been developing a love for the humble noodle for over a decade. His first exposure to the business was helping out in a ramen truck in Japan, when he was only 19 years old. Now, Urata's popular Kinton Ramen on Baldwin has developed a healthy fan base and is probably the city's most authentic bowl. There may be competition, but the chef believes there's always room for more. As for opening a ramen food truck in Toronto? It could happen, he says, but he remains wary of the city's bylaws.

I wanted to be a baseball player when I was a kid, and then my major in university was in architecture and design. I was studying in Japan, and then the earthquake happened, and everything was destroyed. I was also working at a restaurant at the time, and I had to work to live--so one guy introduced me to working at a ramen truck in Japan.

What brought you to Canada?

I started in Toronto when I was 21. I worked for some restaurants--a sandwich shop, and some Japanese restaurants, including Nami. I worked there for five years, then decided to move to Vancouver just before the Olympics. But I got an offer from the Guu guy to open up a ramen restaurant here. 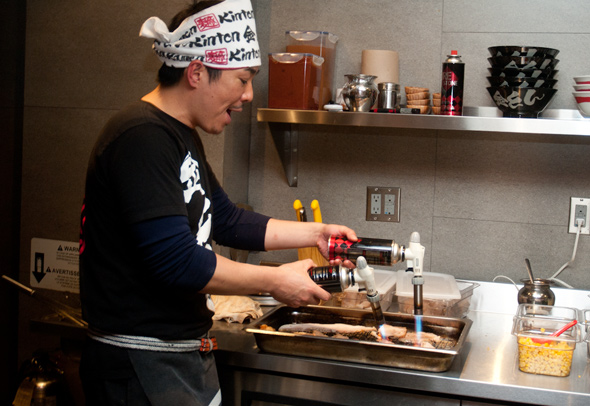 Why are you so obsessed with ramen?

I've been working with ramen for over 10 years. Ramen is just one bowl, but you put everything in it. It looks like an easy, simple soup with some noodles and meat, but there's lots of work there. We spend over 20 hours on our ramen and when we get an order, it just takes about five minutes to serve it.

What do you think about all the ramen shops opening up in Toronto? Other than you, who makes the best ramen in Toronto?

People are starting to focus on real ramen. In Japan, the movement happened around 20 years ago and is still very popular. Every street corner and every station has a good ramen shop there. There are also a lot of ramen shops in Vancouver. In Toronto, it's starting to move, but there was less competition before. I know some of the restaurants here, but they're not really ramen to me. That's why I'm here.

Do you make your noodles in-house?

No. I work with a factory in the States, and we meet a lot. I place a special order to make sure the texture, and the mixture of flour are good.

From our menu, I like the miso ramen the best. It's the most difficult to make, and I try to study and make a good miso base. I couldn't make it for the first two weeks, but now I think I've got it.

Describe what a busy night at the restaurant looks like.

We enjoy our work so much. We're always shouting "bravo" at each other in Japanese. We're not just trying to be a ramen shop, but a ramen bar with the atmosphere, music, interior, and the way we present the food. 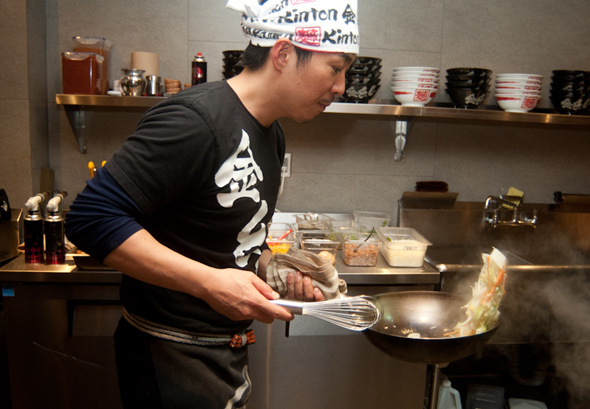 Do you (and your Guu counterparts) lose your voice with all that shouting?

Always. When I opened, I had to work everyday for two months. My voice was gone. But it's cool, and I don't mind it.

What's the best part about your job?

When the customers are happy. They're smiling, they say "thanks," "it was great," "awesome"--it makes me so happy. And all the staff from Japan; we came here and started working together, from early morning to midnight, so we're kind of a new family.

Any plans for expansion?

Why not? Some students come to eat here three times a week. We're hoping to open somewhere east of Toronto, Mississauga, or maybe somewhere north, sometime soon. This location has been open for four months and is just a baby step. 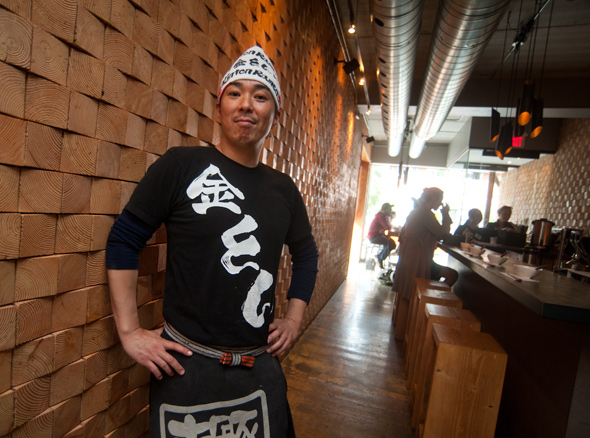 A chef that inspires you? Emeril Lagasse. He's funny.

What's one dish you can't live without? My mother's pancakes

What would people be surprised to find in your fridge? Pig's feet

What's one food trend that needs to end? Dumplings