Get to know a bartender: Matt Bod, Bar Hop

In just a few short months, Bar Hop, nestled among the clubs and lounges along King West, has already made a name for itself as one of the city's best beer destinations.

Certainly its impressive line-up of ever-changing craft brews is one of the bar's main draws, but those who go there with any sort of frequency know that part of Bar Hop's charm is head bartender Matt Bod, who manages the impressive selection of draughts and bottles with a smile and a vast knowledge of beer.

I hung out with Matt on a Sunday afternoon recently and, over a few pints, chatted about bartending, the Beach Boys, and how a Péché Mortel can change your life.

Where did you start bartending?

I initially started at this very unremarkable corporate restaurant called the Lone Star Texas Grill. I started as a busboy, then I moved to server and then bartender, but it wasn't until Smokeless Joe that I really started bartending.

So you were pouring a lot of Coors Light for tourists?

Well, they were a Labatt bar so it was actually a lot of Blue, Keiths and Stella, and a lot of Bud and Bud Light.

So when did you see the light and become a fan of craft beer? When you started at Smokeless Joe?

It all kind of happened in a span of three or four months. I'd kind of been into beer for a while--when I went out I'd get a Czechvar or something like that. I really liked St. Ambroise Stout--but then a couple different things happened. My roommate Jeremy and a friend of ours, Colin, both worked at Smokeless Joe, and Colin brought Jeremy back a Péché Mortel from Montreal when they first started bottling it. I think it was the first batch. I tried it, and it was just, "Whoa."

Also around the same time I was in a band and we were recording an album in the US, and I ended up trying a bunch of brews down there. Two that really stuck with me were the Rogue Chocolate Stout and the other one was the Rogue Chipotle Ale. At the time I was like, "What is this?" Those beers kind of opened a gate--like beer can taste like this?

That's around the time I got a job working at Smokeless Joe. They needed someone reliable to work in the kitchen, and I needed the kind of job that could afford me the leeway to go on tour with my band.

What was your band called?

We were called The Roman Line. We were punk rock. I started working at Smokeless more and more and when the band broke up, I just started working there full time. Then when Rob [Pingitore] started this place, he kind of said, "you're coming with me."

Are you from Toronto? 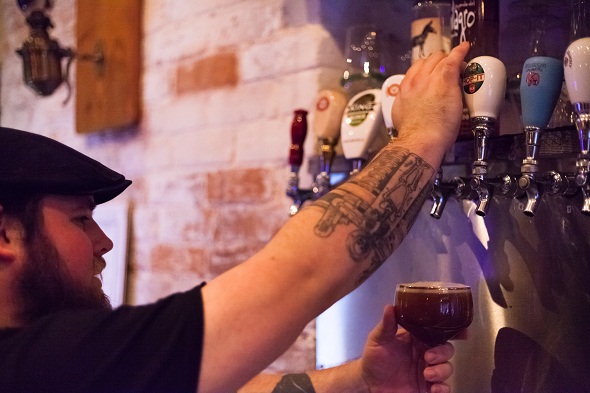 So this is obviously very much a craft-beer bar. Do you serve many cocktails?

We do basic cocktails. I can make Manhattans and martinis, but it's definitely not the focus, and we kind of draw the line at classic cocktails. If someone walks in and wants like a sour appletini? No. We try to be as accommodating as possible while staying within the realm of what our bar is about.

So you don't have a signature cocktail?

No. I have a signature girly shot--you know, for when bachelorette parties walk in at midnight on a Saturday night. It's peach schnapps, blue curacao, and raspberry sour-puss shaken over ice, so it's like blue-ish purple. They always love it.

You should call it "The Bachelorette." So what do you do outside of bartending? Are you still in a band?

Yeah, just kind of as a hobby. We just played the Horseshoe a couple weeks ago. It's more like bluegrass than punk rock. We've got banjos and mandolins. We're called Snake Oil Salesmen of Southern Ontario.

Good name! So where do you drink when you're not working here?

Lately it's been Thirsty and Miserable. It's just so barebones, and there's an awesome bottle selection and great music. I go to Volo a lot--as does pretty much any beer person in the city. I also go to Get Well a fair amount lately. I really like the vibe and there's always good stuff on tap. And Bellwoods--I mean, every time I've been there, the beer has been outstanding.

The fact that a lot of "beer people" come in. Friday and Saturday nights it gets hairy and you don't have time, but for the most part I always make time to chat with people--just talk beer, shoot the shit. And we always have a huge rotating draught selection, which I like a lot. One of the things we talked about when Rob opened this place was that, if you come here once a week, every time there will be a few different things on tap, and usually you'll find one or two things that you've never had before.

It can be tough because there a lot of beer bars around town now and they love that stuff. Every Monday and Tuesday, I spend the day on the phone, calling different beer reps and seeing what I can get. 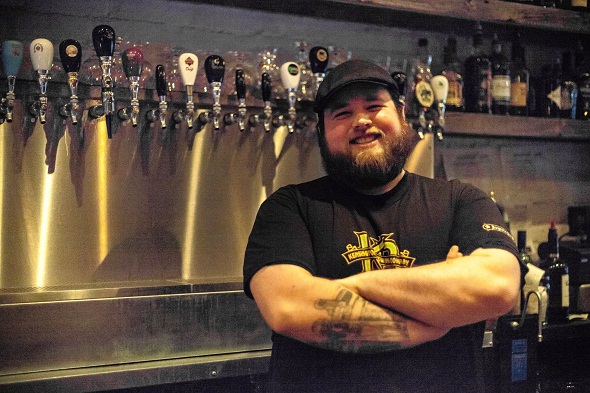 So what's the worst thing about working here?

Sometimes on Saturday nights, you get a certain demographic in here that would not be our target demographic. Put it this way, when they come in, I'm happy if they order a vodka soda so that I don't have to argue with them about why they can't have a bottle of Budweiser.

I didn't actually see it, but when I was working in the first couple weeks we were open, there were these two backpackers that were really weird and had clearly just walked in off the street. We hadn't been open long and it was super, super dead and around midnight. First we cut them off, then they went down to the bathroom together, and after ten minutes, we got our door guy Craig to go down and check on them and, according to him, they were having sex and doing coke at the same time.

[At this point Steven the Mayor, a regular sitting at the bar, chimes in with perfect timing to note of attempting both activities at the same time: "You can't really enjoy either."]

What do you think of the city's craft beer scene?

I'm over the moon. It's getting to the point where I can walk into a place and 50% of the time there will be a decent craft beer on tap, whereas I think a couple years ago it was not like that at all. And the events--the beer events at Volo have been amazing. For Toronto Beer Week, we had a tap takeover with Great Lakes and Beau's, and we were pretty much at capacity from 15 minutes after we opened until about 1:30 in the morning.

I've noticed that Bar Hop staff is pretty amazing at making recommendations for people who might be a little intimidated by your draught list. What would you recommend to a craft beer newbie?

What's something about you that people might find surprising?

One of my favourite bands is the Beach Boys. People are always surprised about that. But I don't know how people can listen to Pet Sounds and not be like, "Wow. That is beautiful music." 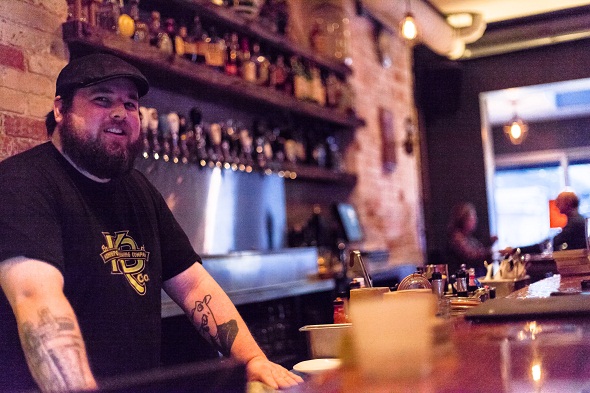 If someone's going to buy you a shot, what should it be? Blanton's

For more bartender profiles, visit our Get to know a bartender Pinterest board.