Get to Know a Chef: Deron Engbers, Oyster Boy

Chef Deron Engbers may be new to the Oyster Boy family, but his passion for the food and long-time friendship with the owner made the transition a perfect fit. Engbers hails from a long culinary background at some of the city's finest spots, and isn't short of praise for his current location. He sat down to talk about how he went from playing the classical guitar and tuba to creating dishes, his seafood obsessions, and what's next for this West Queen West favourite.

No, I wasn't allowed in the kitchen when I was a kid; my mom thought I would blow it up. Originally I was supposed to be a musician because I studied it my entire life. I was going to take a year off between school and university, and my dad got me a job at a restaurant called Earls. We have one in Toronto now but it started in Edmonton.

I think Earls was the place that gave me a lot of the basis for what I do now in terms of structure, organization, and how I approach things in the kitchen. Back in 1991, Earls was more of a high-end pub; they had really good food, but it was never really about the food, but more about the atmosphere. But coming in the kitchen at 17, you learned a lot about structure and organization, which to me is the basis of any kitchen. If you have a well-structured kitchen with rules in place that allow you to focus on the food, that's the strongest part. Food is obviously what we do, but all of that background stuff makes a kitchen what it is. 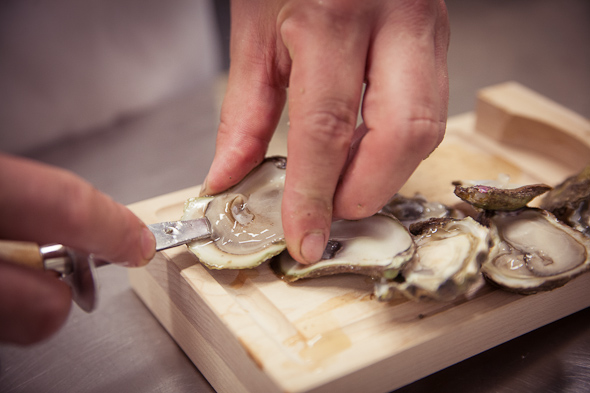 What's the best way to eat an oyster?

I like my oysters either completely plain in the shell, or with a little bit of lemon. That's a personal preference, and for some people who are just getting into oysters, we have sauces available. Sometimes you can use the sauces to accent the oyster and kind of change it up if you're eating a big plate of 48 oysters; it can get a little bit monotonous, no matter how much you like oysters. Try and keep it simple and try and keep it so you can taste the difference between the oysters. Every oyster that we have has a slightly different taste due to the species and water they were raised in.

Describe what a busy night at the restaurant looks like (how many oysters do you need to shuck?)

Are you obsessed with any other seafood?

I love scallops. Scallops and dungeness crab are probably two of my favourite things on the planet. Dungeness crab from spending five years in BC and working with it almost every day, fresh out of the ocean. And with scallops, I don't know what it is, but they're just freaking delicious. 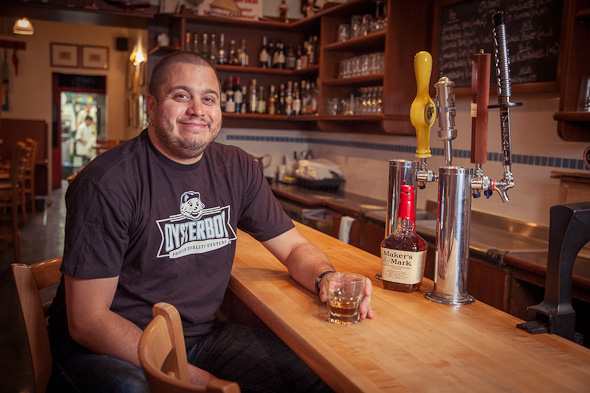 What are the main differences you see between Oyster Boy and other famous seafood houses like Rodney's or Starfish?

I've only been to Rodney's and Starfish a couple of times, so I can't really say anything about them with a great depth of knowledge. But from working here, I think the front-of-house staff really make Oyster Boy what it is. We have three staff people who have been here for seven years--a couple have been here for five--and that really shows something about the place. People love it, and I think that really comes through for the guests that walk in as well. They can see that the staff are relaxed, are having a great time, and enjoy being around each other. The staff are extremely knowledgable about the oysters that we serve, and have taken the time to learn so they can speak with knowledge and authority about what we do here.

We're doing a menu change soon. My direction is pretty much the same as what the owner, Adam, has been doing; we want to keep it fun and we're trying to deal exclusively with sustainable products through Hooked and other smaller, independent farmers. We're dealing with guys that are passionate about what they do. We started making our own smoked salmon in-house, which is really cool, and I really enjoy that side of things. I'm also looking to explore something like seafood charcuterie and where we can take that. 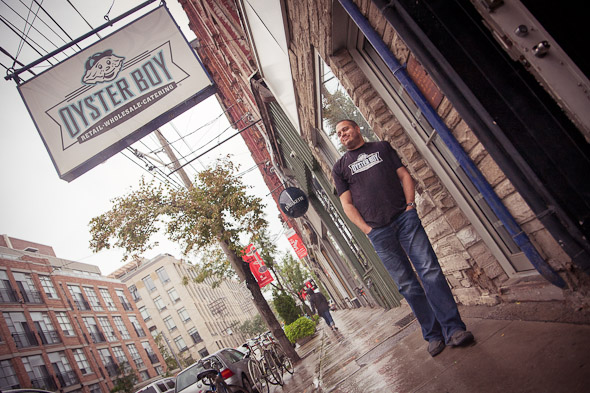 One dish you can't live without? Pasta

What would people be surprised to find in your fridge? Nothing

What's one food trend that needs to end? Food trends