Get to Know a Chef: Rob Gentile, Buca

After training for years under one of Canada's top chefs, Buca's Rob Gentile has made his mark at one of the city's most sought after restaurants. His fresh pastas and pizzas have garnered a notable following, and can easily be dubbed as some of the best in the city. His focus on classic technique and seasonality of ingredients sets apart even his most simplistic dishes. With two new restaurants on the horizon, including the highly anticipated Bar Buca, Torontonians can hardly wait to see what the chef will offer next.

I always wanted to be, but I wasn't sure when I was growing up that I was 100 per cent on it. But I would definitely say that right from a very young age, probably at about five or six years old, I was obsessed with cooking shows. I was just as interested in cooking shows as I was in cartoons. My grandmother would look at me and she would be like, "What are you doing? What's wrong with you?" I was excited to watch them and be around food. 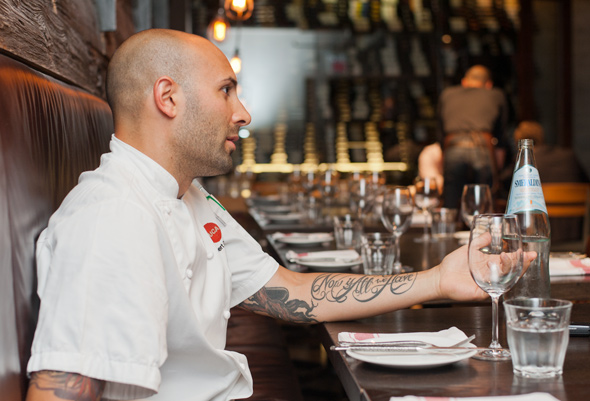 I cooked at a whole bunch of different restaurants when I was younger. I worked at my first restaurant when I was thirteen years old. But I think I wasn't one hundred per cent on it until I was eighteen years old. The first job I got commuting from Brampton was Grazie, and I was about seventeen when I was working there. And it was my first experience with fresh ingredients coming in every day, fresh pastas and things like that. It was an eye opener to having to actually be able to cook rather than just throwing things together.

And then I worked for Mark McEwan--he was my mentor for 10 years--and that was the step towards professionalism. Working for Mark McEwan was the sort of pinnacle. It was the most challenging job I ever worked in and it took the most out of you, and it required the most dedication. That kind of molded me into becoming a professional.

What's your favourite dish to make and why?

I would have to say just a simple pasta pomodoro. For me, it's like you put the best ingredients together to make that one special dish. It's not just a can of tomatoes and dried pasta, a little basil and olive oil. It's the best basil you can get when they're ripe, the best eggs that you can get from the farm to make the pasta, and it's the best olive oil that you can find, salt pepper and a garlic clove. For me, the combination of those ingredients is the dish that describes Italian cuisine. 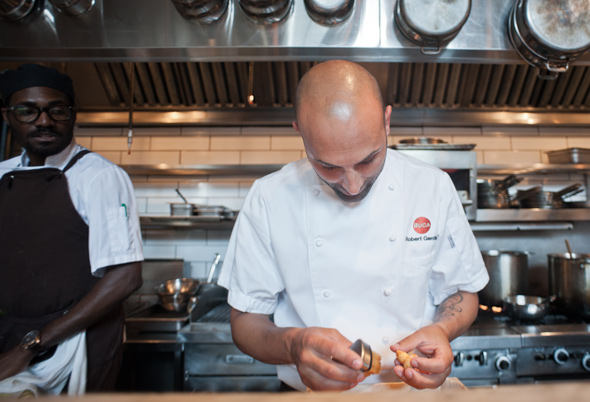 Jamie Oliver famously tweeted how much he enjoyed your food. Who's someone you'd love to cook a meal for (but haven't yet)? What would you cook them?

It's not a chef, but the one guy I would love to come into this restaurant would be Bob Proctor. He's sort of an incredible mind. I went to go see him when I was 24 years old in Toronto. He did a presentation on positive thinking and the way the mind works and that single presentation changed me completely as a person. I was working at Bymark at the time, and I wasn't exactly the most pleasant person to work with. That changed the way I thought and I started seeing things and acting towards others in a very positive way opposed to that rough edge I had. If Bob Proctor came in here, I would be completely freaked out.

What would I cook him? I'd go simple, I'd keep it very seasonal, something like a pasta pomodoro if I had it at the time, something that he'd probably had a million times somewhere else but I would give to him the way we do it, and hopefully it would be the best one he's ever had. 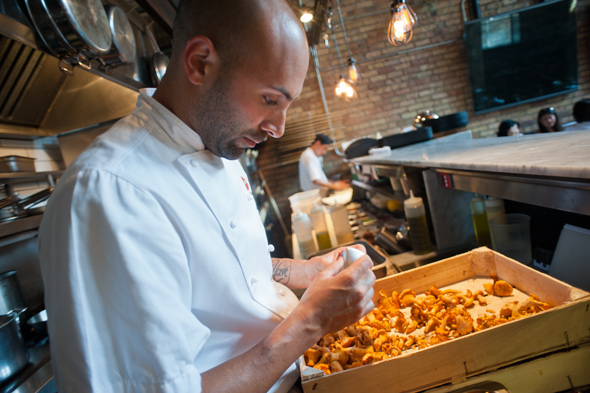 Tell us about the second Buca location planned for the Four Seasons. Where in the development process are you? How do you envision it to be different than the King West location?

We're just going to continue doing what we do. We're going to execute a very seasonal, dated menu, everything we can get in terms of quality ingredients. I think we might lighten it up a little bit, maybe not so meat-heavy. But aside from that, we're still going to have all our signature dishes that we do here, such as fresh pastas and crudos. It will be just slightly different so that we don't have two mirror image locations. Somebody would be able to go to the Yorkville location and be able to come down to King Street and feel like it's a different experience.

We just went through drawings, and they were all approved. We've submitted for a liquor license and once we get that and the building permit we're going to start construction. With these kinds of things it's hard to say what will happen--I have an idea of a menu in my mind, but everything has to come together. The space has to sort of develop its character. So once we start building and getting everything, it's kind of a work in progress in terms of the path to when it gets finished.

Will you be spending most of your time at the new location? Or will diners still be able to find you at the original location on a nightly basis?

I'll be between both. I'll have a chef de cuisine here and another at the Yorkville location and I'm going to still be fully hands-on in terms of the menu and creation there. When we first open up, I'll be there full-time for sure until it gets up and rolling, but aside from that it's going to be same as usual--we're just going to spread ourselves out a little bit more. 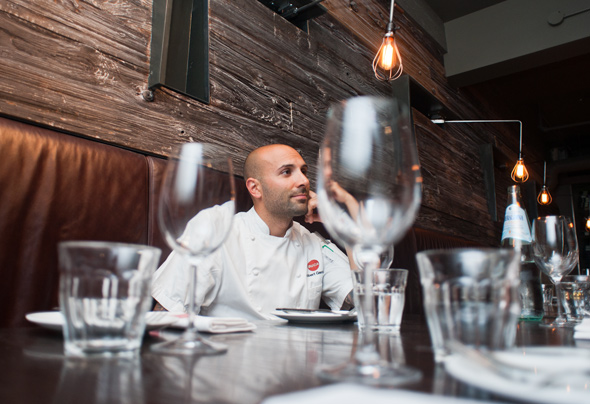 What's the status with Bar Buca on King West? City Hall gave you the green light six weeks ago. What comes next?

It's unfortunate that it took so long to explain what we're doing and for everybody to be supportive of it, but we got it. Tony, our pastry chef from Italy, is coming over, and the drawings and concept were done a long time ago, so it's something we're hoping to get done as soon as possible and get it built and open.

If you had to take someone on a culinary tour of Italian restaurants in Toronto, where would you take them?

It's hard for me to say, because I don't really go out for Italian food. But my first pick would be Enoteca Sociale. I'm good friends with the guys and they are like-minded. They're focused on ingredients just like we are and I think what they're doing over there with Italian cuisine is great. 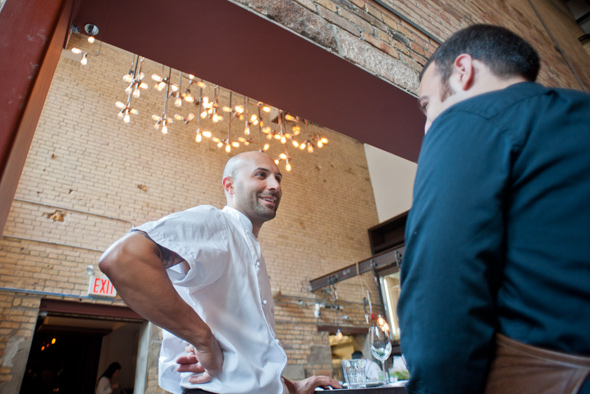 Best culinary tool? My horse bone from Italy (used to smell like the inside of a cured meat)

What's one dish you can't live without? Pasta

What's one thing people would be surprised to find in your fridge? Pig's blood

What's one food trend that needs to end? Deconstructed food