Toronto through the eyes of SPUD

SPUD's name has become synonymous with Toronto graffiti culture, as those traversing the city may find it peppered on walls and bridges all around them. Recently though, his work has popped up in galleries for a solo and group shows, moving his art from weather-beaten brick to canvas.

Through Rob Ford and his notorious war against graffiti in the city, SPUD found his first major muse. In March, he had his own show, Censored, at Don't Tell Mama Gallery. The show engendered a discussion regarding the limits of public expression and posed difficult questions about whether graffiti is a form of vandalism or a form of art.

SPUD ducked out of the shadows to have a chat with us about graffiti as art, Rob Ford, and to offer an ever so slight glimpse of the man behind the mask and spray paint.

Are you a Toronto Native? What neighborhood did you grow up in ?

Yes I am. I grew up here there and everywhere. I even spent time in Eastern Canada before moving back to T-Dot.

What is your favorite thing about the city?

I enjoy our city's diversity, and looking at all of the exposed red brick, and all the old buildings. You really just don't see architecture like that anymore. I enjoy painting on a warm summer's night and chilling in some of our great city parks. Like Trinity Bellwoods and the Grange on a hot summer's day. I love that we can ride our bikes and pretty much get from one end of the city to the other in a reasonable amount of time. 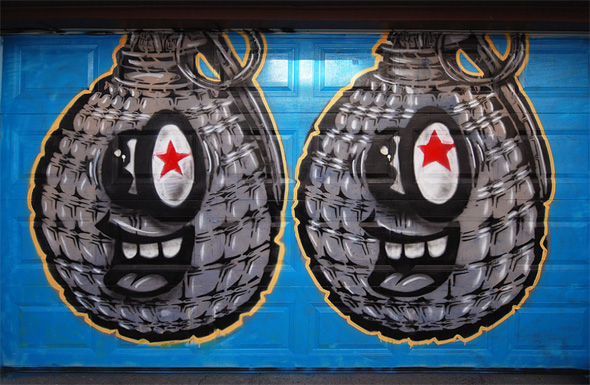 Do you think Toronto is a different place since Rob Ford took office? How so?

Yes, the city has changed. Aside from the "War on Graffiti" all of Ford's cuts to much needed community programs are affecting all Torontonians, young and old. Cuts to the libraries will only aid in putting more kids out on the streets. Libraries provide tutoring, quiet reading areas and community activities. With cuts kids won't have these programs to take advantage of and now might not even be able to borrow a book, thus hindering their learning and reading skills. Toronto's neighborhoods thrive when the community centers in the neighborhood receive funding to provide things like reading corners, arts and crafts and recreational sports teams and even community gardens, which help to bring the communities together.

Do you think there is a distinction between graffiti and vandalism? What is it?

Yes, I think there is a distinction, but first you have to define just what is considered vandalism. Throwing a brick through a window IS vandalism. Applying paint to a wall that you have not been given permission to paint, is that vandalism? Graffiti can be considered vandalism depending on where and what has been painted. Some graffiti is done legally, with permission granted from the property owners. But for the most part graffiti is illegal and is created in the darkness of night. I guess it really is a question of personal taste.

If you had a chance how would you handle graffiti in the City? Would you like to see any of it removed?

I wouldn't handle it... I'd let it takes its course. I feel it is a part of our art history. Graffiti thrives with an illegal street element.

How do you think Toronto's graffiti stacks up against other major cities?

Here there is no love amongst other artists and the community. It feels like there is no appreciation for the art. That is not to say that we haven't had more or better support in years past when there was initiative to work with both the artist and the community. I have traveled to other places and been in other major cities where graffiti is embraced, celebrated and even brings all members in the area together to enjoy freedom of expression through art.

You recently did a gallery show. Is there something lost when one takes street art and puts it on canvas?

Yes, I think that there is something lost. I think you lose the rawness of the graffiti/street art. It loses its appeal and the danger element. When I am working in the gallery I am primarily painting on canvas. I'm not faced with the different texture and surfaces I paint on in the street. It is also a smaller surface to paint on then I am used to. One could say that when you are painting on the street you are faced with less time and the possibility (if it is an illegal wall) being arrest and brought to trial, whereas on canvas you have the time to apply different mediums without those restrictions, you so might produce better art. 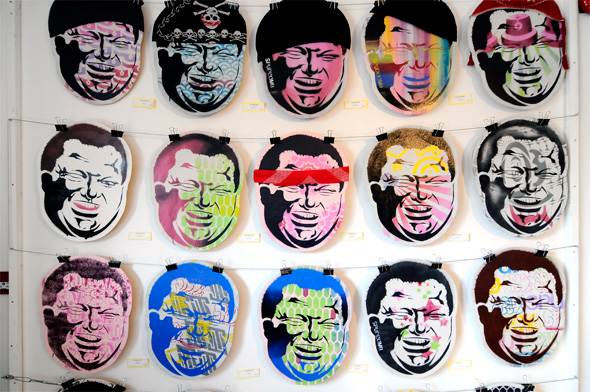 Pre-Rob Ford, who/what were some of your muses?

I grew up around mainly girls. I'm just a big kid at heart. I love Star Wars and Lego. I think it is possible that zombies might try and take over the world one day. But hey, it's ok, if it happens I'll be ready, I'm a survivor, bring on the Zombie Apocalypse. I love skate boarding, ripping through the downtown core, those are the roots. I'm really an undercover jock, but shhh...don't tell anyone.

Where's your favourite place to write in the city?

Under a dark bridge somewhere...quiet and private.

How about the most under-appreciated place in Toronto?

The Bait Shop Skate Shop down the Milky Way Alley, off of Dufferin. It's a gem, a sweet little skate board shop with a ramp and a gallery space and silk screen set up.