Get to Know a Chef: Russell Nicholls, Aunties and Uncles

From the moment he stumbled across the property (formerly an old record store), chef Russell Nicholls had a vision for the space. While the east side, he says, was written off at the time, Nicholls dreamed of opening a coffee shop that would capture the essence of the diners he frequented when he was younger. Fourteen years later, Aunties and Uncles (named after a Jam song) has become one of Toronto's most beloved brunch spots with its unique retro aesthetic and comfort fare. Though he's worked at fine dining restaurants, Nicholls says it always come down to serving simple, well-valued food, in a space where his customers can call home.

Pretty much. I had an idea in my mind when I was in my mid-teens. I had always worked in restaurants on the floor as a busboy, and I wasn't very good at it, but I liked restaurants and part of me always envied the kitchen staff. There was a sense of camaraderie that the front of the house just didn't have, and I was a little bit shy around people so I didn't feel like I was at home with bussing. I always kind of wanted to be at the back, and I think cooking kind of suits my personality; just the pace of things, and the long hours - none of that bothered me. 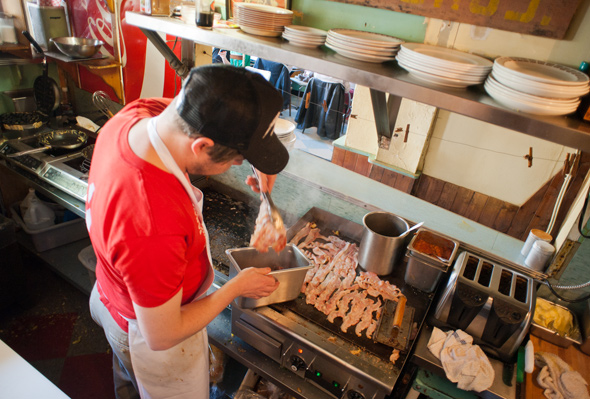 I worked at this sports bar in Waterloo where I grew up, and I was bussing there three nights a week. I went to chef school when I graduated from high school, so I moved here right away. I didn't really know anything about cooking, but it's a language and I think I learned it pretty quickly. I didn't have any trouble adapting to things, and I felt at home with it. I dropped out after one year just because I wanted to start working.

Why brunch? (and not dinner)

It was probably because I spent a lot of time hanging around this area when I was in my early twenties, and I would eat a lot of breakfasts before I would go and work a lot of twelve hour days at the restaurants that I was at. And it would always be the night shift, so I guess some of that rubbed off. And when I was a teenager I spent a lot of time ditching school and hanging around in diners. I just always really liked breakfast and just the culture of eating eggs and bacon and drinking coffee.

And I also think that it's more unpretentious; with dinner you can easily get swept away, a lot of things have to be fancy. And I also think that it fits in your budget too, being a young cook you never really had any money so either you go and spend less than $10 on a breakfast, or you go out for dinner and spend $40, $50, $60. It kind of appealed more to me. 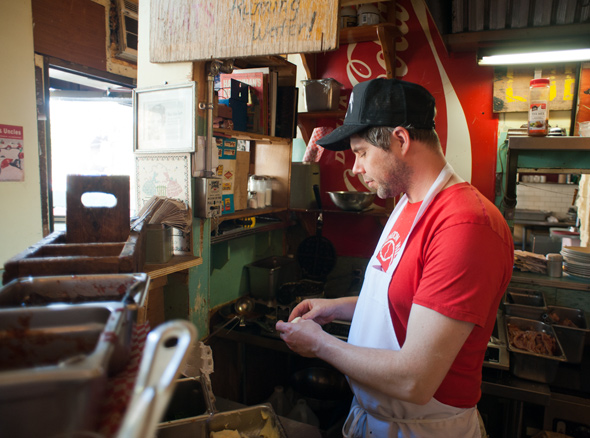 What's the secret to doing a good brunch?

There are so many different ways to look at it. Anybody on any given day could cook one meal for four people that would be mind-blowing, but to say that you're going to work in a space that's about 25 sq. ft. and serve over 200 to 250 people on a busy day, there's many different ways to look at it. Anybody at home could make an amazing eggs benedict, but to translate that into a setting where you could have 40 customers sit down and order in 10 minutes, it's kind of hard.

Can a popular brunch spot also be a dinner destination? Or do you have to focus on one or the other?

It could be, but for me, I just made my mind up a long time ago that I have a vision of this place and this is the way that I want it. And no, it hasn't necessarily evolved like other restaurants in Toronto have. I used to have a business partner and we used to do dinner parties once in a while and that was fun, but ultimately, this place is known for breakfast and I just think that it lends itself in a more positive way if this is all we do.

And at the end of the day, you turn the key on the door and you go home and you know that the restaurant is safe and you know that when you return in the morning you know exactly what you have to do. But a lot of restaurants try to do too much, and it's easy to get into that. I learned a lot from working in different restaurants, and restraint is always a good thing to know. 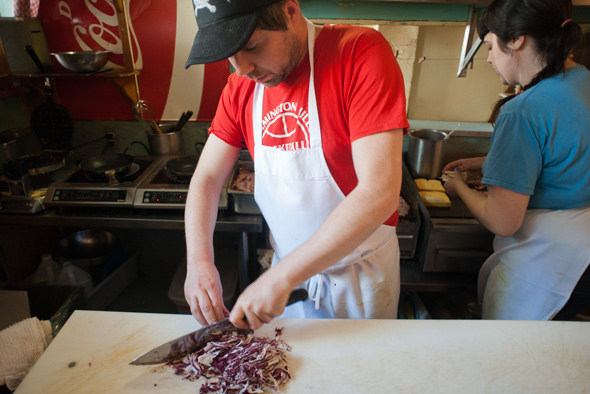 What does Saturday and Sunday morning look like for you?

Usually the customers come in at ten to nine and you have people sitting down and waiting. But by nine, you could expect the restaurant to have anywhere between 10 and 25 people in it. And from there on it's just a wall of tickets all day long until you get off the line at about three-thirty, quarter to four and then you sit down and have lunch, take a half an hour break and then clean up and go, done by five-thirty.

Owning a restaurant is a marathon: it just keeps going and going, so it's a game of attrition. And your work ethic has to be suited for that, because a lot of people are designed for a sprint. This job is suited for me because I just trudge along and that's what you need to survive here. You need to be able to just pace yourself.

My main interest outside of work is for sure listening to music and playing guitar. I started learning how to play later in life, about four years ago, and it's kind of consumed whatever peace of my mind I have outside of work. Basically that conditions me to be able to come back the next day rested. 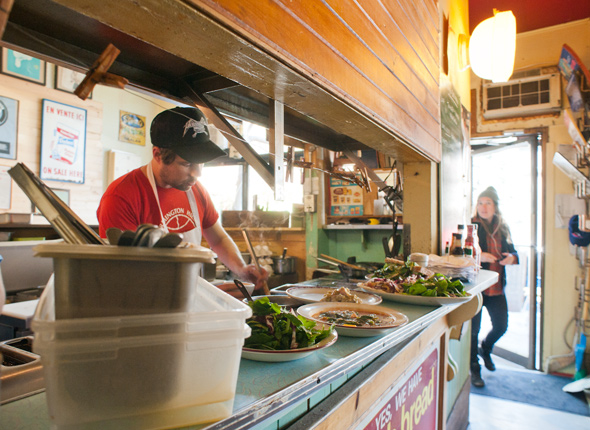 What's the secret to cooking eggs?

You have to have a medium-hot pan with the eggs whisked up really well. You have to add butter of course, and you have to put the eggs in the pan before the butter burns. You have to stir the eggs constantly because it incorporates the air and they become fluffy as opposed to flat and dry. It's almost like making a really nice latte where you make the foam properly-it's not that different with eggs.

What brunch item do you hate cooking the most? The least?

I guess the tuna sandwiches. It's a bit of an eye-roller because there are more ingredients that go into it than any other thing. And you only sell a couple a day, and every time you do you kind of groan a bit. I probably enjoy making the omelette the most. 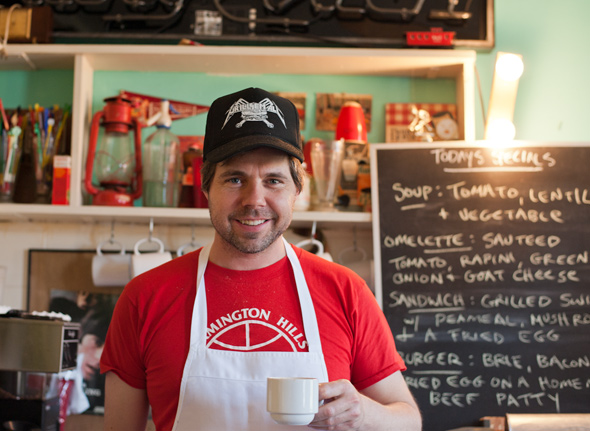 Over easy or sunny side? Over easy

David Chang or Daniel Boulud? I don't know who they are.

What's one dish you can't live without? French fries

What's one food trend that needs to end? I don't pay attention to food trends that much, but just being overly creative.