Get to know a Chef: Matthew DeMille, Enoteca Sociale (for now)

The chef de cuisine at Dundas West's Enoteca Sociale, Matthew DeMille has finally reached the point in his career that has eluded him for a while. Originally from Ottawa, DeMille moved to Toronto where he soon landed a position at Canoe, a job he believes set the tone for quality and perfection he strives for in his craft. Last week it was announced that DeMille will be leaving his job at the restaurant at the end of April. Here, he speaks candidly about his reasons for leaving, his relationship with chef and close friend Grant Van Gameran, and why he just loved food so darn much.

I always had a love for food. Growing up, we didn't have a crazy amount of money, so my mom would always find ways to have a decent meal on the table using tough cuts or off cuts of meat, or greens you wouldn't usually consider having for dinner and she would use that and have that on the table. So I think it kind of derives from that - loving, enjoying cooking, the challenge of it.

But I think it was when I got into my early twenties when I worked in a video store, and I worked in a bank for a short amount of time...it's addictive, it just draws you back, you try something else and it draws you back. So finally, when I was twenty-two, twenty-three I was like, 'Ok, let's do this full time.'

I don't know if you can consider it a restaurant, but I worked in Tim Hortons when I was 16. You know, just toasting some bagels, making tuna salad, pouring coffee.

Why did you leave Parts & Labour?

I think one of the biggest things was that it's my first chef gig. Up until now it was like sous chef, chef de partie, executive sous chef. And when I saw that 'chef de cuisine' title, I really wanted to go for it because I thought it was time to go for that next step and try it out; you know, have my own kitchen, my own crew, and my own restaurant to be proud of.

What's the difference between working there and Enoteca Sociale?

Obviously the style of food is very different there, it's kind of like this rustic, but at the same time sort of contemporary Canadian with French roots, very hearty cooking. Here, it's sort of like a Roman style, but using local ingredients. It wasn't a huge factor, but there they also had the bar underneath and the venue where rock bands would play and upstairs they had DJs...and towards the end of my time there, I wanted a nice, quiet little restaurant, 80 seats just for food, food first. Not saying that Parts & Labour wasn't, but just food and wine first. 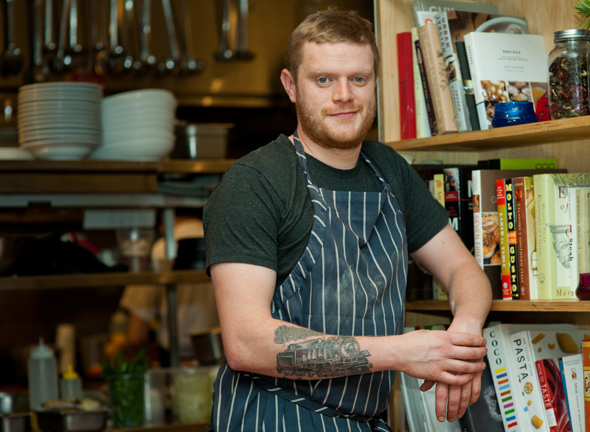 How has Grant Van Gameran influenced what you're doing at Enoteca?

One of the main things is that I don't think you should ever stop learning. And I think we're both on some degree learning from each other, we're kind of showing each other things. Grant's really helped me out, because it was a little bit tough when I was by myself here before these guys came on to help. He's brought some great ideas aesthetically with the menu and also serving the food. But I mean, one of the biggest things is just being a motivator and just stepping it up. Even though you may think a dish is complete and ready to go on the menu, he will say something and give you direction.

How familiar were you with Italian cooking before you landed the job?

I wasn't super crazy familiar with classic stuff. I worked at some dingy little Italian joint in Belleville, I worked at Local Kitchen and Wine Bar, and I worked with Albert Ponzo at Le Select, he's got a Sicilian Italian background. So not a lot of super classic stuff, but I think more of the mentality of Italian cooking where things are simple, minimal ingredients but good ingredients, and just tasty.

I love making the lamb ragu because it's a two or three day process. We get in these whole lamb fronts with the neck, the shoulder, the legs, and we take it all off the bone, we cut it up and marinate it with lots of red wine, lots of rosemary, shallots and then we grind it. And when you're actually making the ragu in a pot, it's like a six or eight hour process, just because you're slowing things down so much and you're developing so much flavour in every single step. Just the transformation is amazing, the process.

What's the secret to cooking pasta?

On my days off, I have a nine month-old son, so I'm super busy with him. I love hanging out with him, he's like my best buddy. But other than that, staying motivated and just constantly flipping through books, not really for a recipe, but maybe for a certain technique or a certain ingredient. Because you never really want the menu to be stagnant.

I don't cook a lot on my days off, I'd like to try to. But I mean, end of the week comes, sometimes you just want to order in maybe something that's not quite so good for you. And yeah, just have a couple friends in. I love entertaining as well.

Why have you decided to leave this job at the end of April?

It was a tough decision. I've been in Toronto for a third of my life and right now. It's a great time in the restaurant dining scene and it's on the cusp of being something huge. The reasons have nothing to do with the restaurant. I love Enoteca. That place is my family and I spend a lot of time there and I love that place. Toronto is quite an expensive city to live in and having a child here is a little bit difficult, so we're going to move closer to our families - closer to Melrose (between Toronto and Ottawa). I'm going to keep cooking - I'm not taking a sabbatical, I'm not taking a break, I'm not going into the woods or anything. There are a few options where I'll be working, but no, I'll continue cooking, and what that is...we're just trying to figure that out right now. 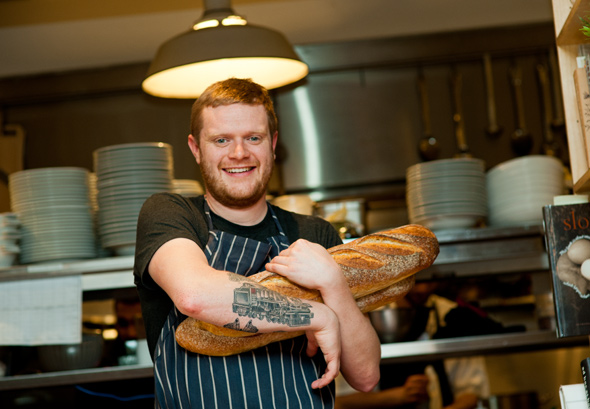 Can you win friends with a salad? Oh for sure. I can find a way.

What would people be surprised to find in your fridge? Baby food (homemade)

What's one dish you can't live without? Nachos and salsa

What's one food trend that needs to end? Burritos, or burgers