Get to Know a Chef: Jeff Claudio, Yours Truly

While Toronto may have started off as another blip in his travels, chef Jeff Claudio admits he isn't packing anytime soon. Now serving his creative cuisine at the much acclaimed Yours Truly, Claudio undoubtedly draws influence from the places he's visited and loved: Sydney, Paris, and Tokyo to name a few. Claudio, who cites his family of great chefs as a source of his passion also sings praises for the city his diners hope he'll finally call his home: "I'm in a dream right now," he says, "it's crazy where everything is going."

No, actually. I was really into golfing when I was a kid. I was actually working at a golf course - in the kitchen, so that's how I got into cooking. I was just doing it as a job, and as I got older I just needed to find something. I really enjoyed the kitchen, so I kind of chose that. But it took time to develop a passion for it. So I wouldn't say always; it was really hard in the beginning, and it's still hard.

I was sixteen when I worked at a place called Mayfair Lakes Golf. It was good, I mean I got free golf out of it. I was a dishwasher first, which was really good, I mean at the time it wasn't good, but I think you value it as you progress in your career. You learn organization, how to keep a section clean, and all that. 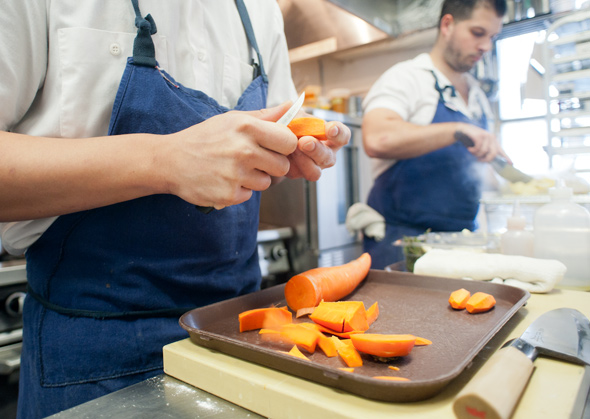 Where did you grow up?

I grew up in a place called Ladner in British Columbia. It's about 40 minutes south of Vancouver, very close to the border to the States. It's beautiful; it's a very small town, there's only one high school there and it's pretty much a farming town. There's lots of nature, nice vegetables, so it was good growing up there.

You've worked all over the world, how long are you planning to stick around Toronto?

Right now, it's really good. It's a beautiful city and there are a lot of good chefs and good restaurants. I don't see myself leaving anytime soon. I'm really enjoying it, coming back to Canada. So I'll say I'm here for a little bit, but you never know.

You used to be at Scarpetta. What went wrong there?

I think it was about the freedom in the job. I learned a lot there about myself as a person - you work for somebody or you work for yourself. I think with something that size, it's very hard to do what you want. It's hard to have that creativity - it's a lot more structured in the way of the work, which is not a bad thing for some people. But for myself, I like coming in to work where it's not mapped out for you, so you're able to do something spontaneous. And I think that's the reason for leaving: I was in search of that, something smaller, and being able to kind of see everything around you. So a smaller kitchen, smaller theme, smaller dining room...and also a lot more relaxed. 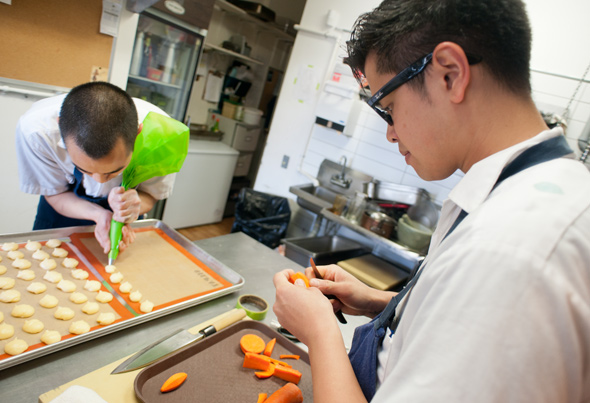 You're getting lots of acclaim for your cooking these days. Any other restaurants try to steal you yet?

It's interesting, you just do as much as you can, and learn as much as you can because you love cooking so much...and you get some acclaim and then someone wants to snatch you away. So no, but I wouldn't go anyways because these guys are great.

I go out and eat quite a bit. I think my life just revolves around being in the restaurant industry; if you're not working, you're out checking out bars or catching up with friends, or reading cookbooks - that's one of my favourite things to do.

What are some of your favourite places to source ingredients?

I'd say Chinatown; there are a lot of obscure vegetables, dried fish, and sauces. I haven't gotten a chance to go foraging yet, but hopefully in the next month or two. We have great suppliers: Sean Brady from Kolapore Springs, we get cheese from Monforte - it's all from people who have that same passion for what they do.

Are there any ingredients you'd like to cook more with but are tough to find here?

I think a variety of really nice seafood: shellfish and fish in general. I mean, it's available, but it has taken a plane ride here. In cities like Sydney, Tokyo or Vancouver where you're on a coast, the availability of seafood kind of shapes the cuisine that I like. I'm sure you're able to get it here, there are a lot of great fish restaurants and seafood shops, but it's not the same...there's a difference between fresh and really fresh. 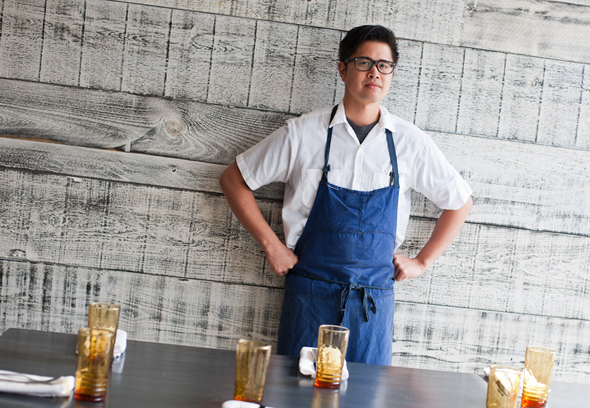 Favourite Toronto restaurant? (that's not yours) Taste of China

What would people be surprised to find in your fridge? Gatorade

What's one dish you can't live without? Noodles

What's one food trend that needs to end? Microgreens