Get to Know a Bartender: J.S. of the Cloak and Dagger

The Cloak & Dagger is one of those places where it's almost better to go alone. Sure there are plenty of long wooden tables to accommodate all of your friends, and sure you'll have a great time with them. But at the Cloak, sitting at a table means you're not sitting at the bar, and that is definitely where the action is.

It's just one of those rare taverns that attract just the right type of eccentric to keep you immersed in great conversation all night long. They're reliable regulars, and there's a very good chance they'll be perched at one of the stools when you make your visit. And if they're not — well, you still have Jordan to entertain you. He's been pulling pints behind the bar for close to three years, and doing his fair share of sampling as well. Which at the Cloak is necessary professional development. Someone needs to walk you through their 20+ tap selection of mostly Ontario micro brews.

I caught up with Jordan before one of his recent shifts to talk about the bar business, romantic comedies and how to move an immovable object.

I started when I moved [to Toronto], so four years now almost.

What got you into the industry?

I knew that I was done playing in bands and stuff and I wanted to go back to school, so I wasn't going to go and just work part-time for $7/hr or whatever and bartending was something I was always interested doing and I just told myself, if I wanted to be able to afford to have a social life while I was here, I'd have to push for that.

My first job was Nirvana, they took me in. They're amazing people, they're like my family, I go there all the time.

What do you do outside of bartending?

Tons of music, I've got like three music projects on the go and just tons of school.

Tell me about the music projects.

The first one we started was called Goddamn Robots, which is like a rock/grunge/shoegaze thing... just with a bunch of buddies who have all been in other bands: our drummer is in The Junction, our bassist is in a band called Crash Parallel and Nick and I used to play together in London (Seconds to Go). We just started for fun, to play the Horseshoe a bunch and just have a good time playing loud rock n' roll.

ttthick as ttthieves is Trip Hop based, again kind of shoe gaze style, down tempo, atmospheric music in the vein of Massive Attack and Portishead. We just finished an album for that that we self recorded in my apartment, which was a really, really awesome, eye opening experience. And then my buddy Brent and I (Brent Jackson, The Junction) have this Bossa Nova thing, just this goofy Bossa Nova influenced comedy shit that I'm sure only the two of us like. 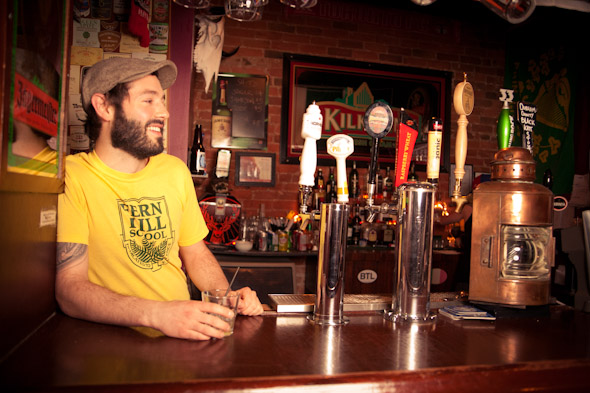 I just think everybody drinks. Everybody. It doesn't matter is you're a huge producer, or a bar owner or a politician — whatever, you come to the bar and you are a regular person. You sit down and talk to the bartender as an equal and you can get--not that it's the goal--but it just so happens that a lot of the time really interesting opportunities pop up. Like, a friend of mine from the bar just gave me TFC tickets, just 'cause he's a good guy. You know? It's just a good environment, sharing stories, partying a little bit. You make enough money to support yourself and be comfortable and, you know, drink good craft beers.

The worst thing is definitely the hours; the worst thing is the sacrifice. Because, if you miss a night of work you can lose out on a lot of money; plus if you're booking off work all the time it's pretty unlikely you're going to keep your job. But everyone else focuses on the weekends, the big Friday and Saturday nights and those are the nights when you've gotta work. So, yeah, that's the sacrifice. Most of the times I've hung out with my friends in the past few years is when they come visit me at the Cloak when I'm working.

My brother is here and I always wanted to live in the same city as him. He moved out really early in my life, but we've always been really, really close and I wanted to be closer to him. But also, besides that, school; I needed a life change and to get out of London.

Who is your favourite regular?

Rod, is a pretty interesting dude. He's done a lot of stuff that he never really talks about until it just trickles out after he's had a few drinks. So, you'd have to come to the bar and talk to him and see what trickles out — but it always blows your mind. He's got a lot of heart and I love hanging out with him. Last night I closed up a bit early and just blasted this progressive metal album for him and it blew his mind. It was so cool.

What would people be surprised to learn about you?

Probably that I'm actually a huge rom-com fan. I just love nothing more than--because my schedule is all over the place and particularly busy, I love to just go home and turn my brain off and feel good and I find that that genre is what does it for me.

So what is your Romantic Comedy cannon, what are the best ones?

Love, Actually is awesome. And also this one called Definitely, Maybe. Nobody can understand it, I don't even know what to say, I just turn them on and feel good. 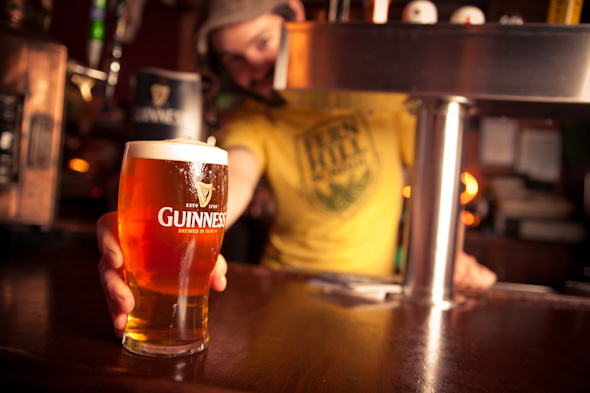 So would you consider yourself a bit of an afficianado of the genre?

I've seen a lot of them and you know, there are a lot of them that have integrity. When Harry Met Sally, that's a really good movie still, there are a lot of great lines in there. But sure, there is some super cheese out there too. Like, I admit, I clicked on a Freddie Prinze Jr. movie recently and I just couldn't handle it. I'm a big Matthew McConaughey fan though.

Well, the Cloak is awesome because it's a big family vibe, a lot of people are in there all the time, so most of the time they'll deal with them first and even escort them out. But if it does get to that, I just have to go ask them to leave. Usually I'll ask them three times, then I gotta put my hands on them and take them out the door and sometimes it can get pretty bad.

There was a huge brawl maybe a month ago where these guys wouldn't let us take their beers just before 2:45 a.m. when we clear everything out. Basically, the DJ tried to reason with them and they started a fight with the DJ, two guys. So I ran up and managed rip one guy off and just barely tossed him out the door and then this other guy was like — 260lbs, I swear — a wall, he just wasn't moving. So he dropped to the ground and just wouldn't move and I was actually just trying to push him out the door. It was like in Winnie the Pooh when Pooh is stuck in Rabbit's hole and just won't budge.

So when we finally did get him out he punched right thought the main window of the Cloak and exploded the glass and sliced his wrist all the way up his arm, he was bleeding everywhere. So I had to call 911 and he was honestly bleeding out all over the sidewalk last time I saw him.

Is that the craziest thing that's happened?

Yeah, that's the worst I've seen. I think that's about as crazy as it's ever gotten.

What about on the good side, what's the best thing you've seen at the Cloak?

Good stories? Always when my buddy Nick DJ's, he plays a lot of Motown and Huey Lewis and Hall & Oats and the bar just gets packed and people rip their shirts off. Usually about three quarters of the bar has their shirts ripped off. There's condensation all over the walls, people are having a good time, it's just a great sweaty dance party — those are awesome times.

But also, it can change depending on who's in there, there are nights, even when you're not making a ton of cash when you catch yourself and realize that it's kind of a special moment.

Where do you hang out when you're not working?

Crooked Star for sure, that's like another home. Nirvana as well. Souz Dal too, they play a lot of Trip Hop stuff that I like and, I could break a window with a rock from my house it's so close. And the back patio there really reminds me of Ratatouille, that movie Ratatouille, I feel like there's little rats making food up there — in a good way!

IPA, Hop Addict if I can find it. And I'm really excited about Spearhead still, those guys have worked so hard and their beer is so good. So yeah, Hop Addict, Spearhead, shots of Jameson. The good stuff. 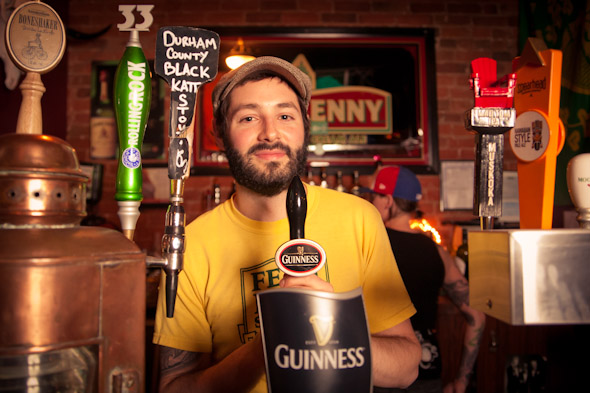 Straight Up or On the Rocks? On the rocks

With a Twist or Olives? Neither

Lemon or Lime? Both