Get to know a bartender: Rachel Conduit of the Avro

The Avro is, as far as I know, the only bar in Toronto with three sizes of Labatt 50 available in bottle. This tiny little nook located near Queen and Broadview might have only been around for a year and a half, but it has settled into the neighbourhood pretty nicely. By design, resident friendly face and co-owner, Rachel Conduit wanted to build a community hub in the neighbourhood--and she's been pretty successful. On any given night you'll find her behind the bar fulfilling orders of said bottles of 50 or perhaps making the best caesar in the city.

She also spearheaded the East Side Icon project, a calendar highlighting some of the admirable men of the east side (all fully clothed, perverts) to raise money to rejuvenate an as of yet unspecified piece of the east end. Every dollar sold goes straight to the project and the community gets to decide where those dollars are spent.

I caught up with Rachel, pre service, to talk about community involvement, life behind the bar and, you know, strippers.

Bartender: Six years. I've worked in the service industry for 13.

How did you get started?

When I was 14 I started working at a little diner in my hometown, Stratford, Ontario.

And how long have you been here?

I've been here a year and a half. I'm one of the owners. 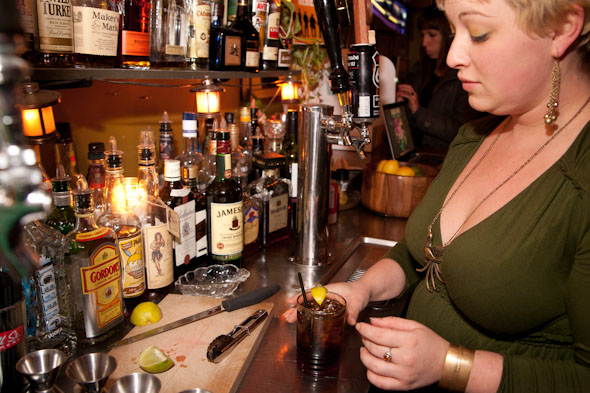 So what is the secret to the Avro's success?

The key to that is actually having a large bar in a small space. That way you have to sit next to somebody, you can't be off in the distance at your own table, you have to talk to everyone in the bar and you have to meet your neighbors. Also, every night there is an event â except for Friday and Saturday. So Monday is rotating art & culture events, Tuesday is live bands, Wednesday we have a DJ, Damn Aykroyd, who also does mix tape swaps, Super Nintendo tournaments, ninties throw back nights; Thursday is plaid night and Sunday is Bring Your Own Vinyl.

Any events that just didn't work?

Chess club. I was really surprised because I love chess, but we set up the chess boards and nobody played and finally my staff was just like "I'm really bored, and tired of picking up the chess pieces that the drunk people keep knocking over. Can we please stop this?"

How do you stay busy when you're not working?

Cycling the east side like a fiend, back and forth. I volunteer at Bike Sauce, which is a non profit do-it-yourself bike shop--we're renovating right now, it's looking pretty nice. Also, scoping out location number two.

Yes, bar number two. And spending way too much time at the Mercury.

Where do you think bar number two will be?

West. Yeah, I've got a couple of spots in mind and I'm putting an offer in somewhere, but we'll see.

And you're an east-ender yourself?

Yes, I live at Dundas and Jones.

What's the best thing about working in bars?

Meeting new people everyday and having awesome interactions with them. 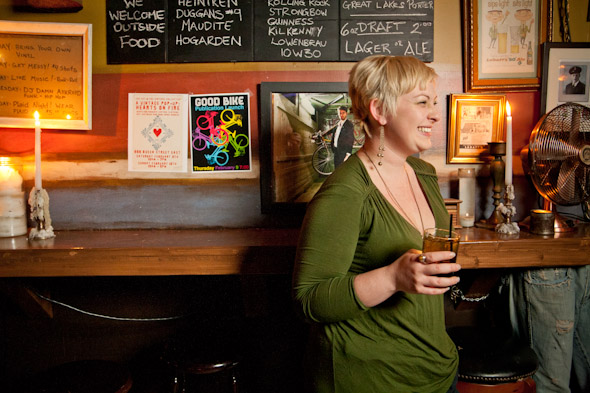 And what's the worst thing?

I was working as an animator. Yeah, but people are way more fun than computers so I dropped that.

What keeps you in Toronto?

I think it's a very dynamic city with a lot of opportunity--that's a very political answer. But, I mean there's a lot happening here. No matter what your interest is you can jump in on it.

I kick 'em out and I take a lot of pleasure in it. Basically, the thing is, this room is too small to have a jerk in it. Like, you really stand out. So if someone is just an asshole, or their personality doesn't fit, they get thrown out.

So last night I cut off some people because one of them ordered a beer and said: "What's a beer that is off market and would make me seem more interesting?" and I was just like, forget it. So anyway, they ran out on their bill and I chased them down... it's all good. It's awesome though because regulars support you.

I imagine you probably don't even need to do much of the kicking out yourself.

Oh, no. I take pride in it. I don't let anyone else throw anyone out. 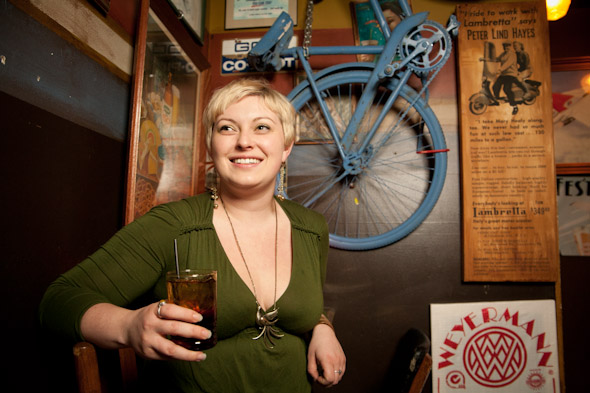 Do you have a favourite whiskey?

What drinks do you hate making?

I don't hate anything, but I love making bourbon sours and caesars.

So tell me what makes a perfect bourbon sour?

It's simple, it's just lemon, bourbon and sugar syrup. But the real stuff, not any of that powdered crap.

Where is your favourite place, besides the Avro?

I'm a sucker for Red Light. Chris over there is this amazing, super friendly guy. I love the atmosphere; I love how dark it is; I love the music.

So you do make your way to the west end sometimes.

I like to hide over there. That way I can talk freely and not embarrass myself in front of people I know.

The stripper fight. We've only had two fights here and they've both involved strippers. The one started over paying the bill and one stripper actually punched a $20 bill into the other strippers mouth. I'd cut them off and thrown them out, but I was making them pay their bill and she just punched this money into her mouth and then started fighting and then there was a boob out and of course none of the guys here are doing anything about it. So finally we got them outside and locked the door and one started chasing the other one with a cork screw. 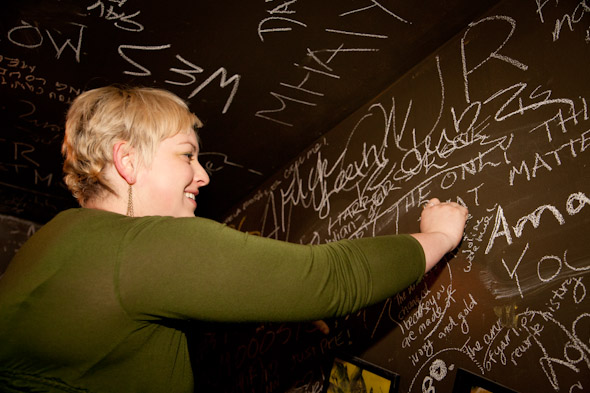 Straight Up or On the Rocks? Straight up

Tonic or Soda? Neither