Get to know a bartender: Fabian Skidmore of The Only Cafe

Fabian Skidmore is about as laid back as they come. Sipping a draught beer, sporting some disheveled hair and perched on a stool at The Only, Fabian is home.

He meshes seamlessly with the Danforth hotspot for beer drinkers, most of whom are regulars. He knows his beer. Especially the local draught brews. And he should know — before getting behind the bar, he was on the other side as a patron for 13 years. Not to forget, as his appearance and demeanor accurately portrays, Fabian is also a musician. He plays straight-up rock 'n' roll in Clang and usually a once-a-year gig with The Shoes, sometimes at The Only.

How long have you been a barkeep?

I've been either bartending or cooking since I was really young. About 22 years now. I started as an 18-year-old in a chicken restaurant. A fried chicken restaurant that my friend started up in Scarborough. I've been at too many places to count. In the industry, there's a shelf life. If you're good and you know it, you know when to duck out and move on. It's probably about five to six months per place. You bring something new to the place and then that starts to wear out. You start to get tired of it and your boss starts to get tired of you. It's a bit different here though.

This is more of a long-term place. There is always a line-up of people trying to get in here as an employee. We have people on staff that have been here for eight or nine years. 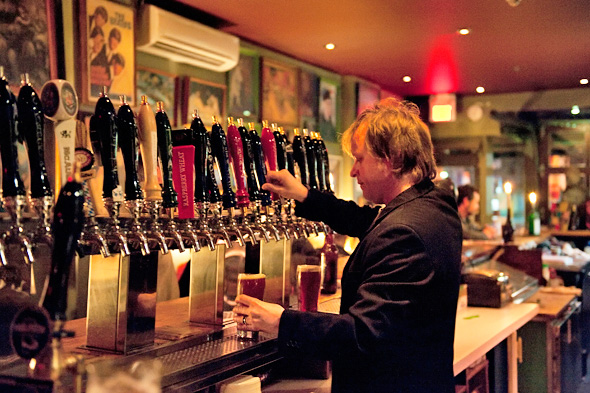 What's kept you here at The Only?

I'd been on this side of the bar [the drinking side], for about 18 years. And I've worked here for about five. My friend James bought this place about nine years ago. He asked me to come in and do shifts and help out. I had always resisted him because I didn't want to ruin my hangout.

The one thing that has kept me here is being able to take it and promote it in my way with the craft beer. James and I are old friends and he trusts me completely and so he's able to be totally hands-off and do other projects like opening the coffee shop about three years ago.

Favourite type of regular and why?

That's a tough question there, Mr. I often get a lot of joy from the regulars that I've known because they're all my friends — that's why it's a hard question. But introducing them to new beer. Most of the regulars (i.e. the people who have been coming here for as long as I have or longer) have their go-to beer. But if I sample out new beer and they're open to it and they switch their brand to that or whatever. Or even better is going into experimental-mode and trying a few different beers instead of sessioning just one kind. Those are my favourites for sure.

Bar Volo would be one. I can go there and see all the staff and operators that I know so I'll be able to talk to someone there. Also, we have a lot of customers in common. It's really neat running into other people there.

I also like The Rhino when I want to be more conspicuous.

Best part about working in a bar? And the worst?

Best part is the people. The worst part is the people, too. I'm really fortunate to work here, because I'm serving a lot of my friends. It's very casual. The Only is casual anyway because it's still kinda like hanging out. The problem is that I can't really hang out because I am working, you know. We're not at the most cream of the crop spot on the Danforth, but the vibe itself sorts out the people who are here to get plastered and make trouble and the people who appreciate what we're doing. It's one of my favourite parts is that it works itself out.

What do you do on your days off?

Hangout with my family. 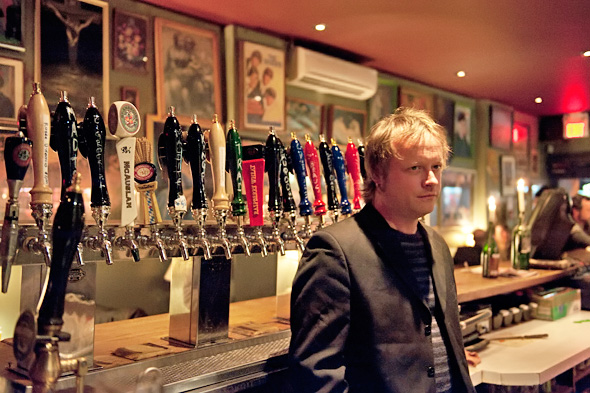 What's your beverage of choice?

Local draught beer. Black Oak Pale Ale is a pretty good go-to. But I don't settle on one because there's always more beers coming out.

What's your best move for kicking people out of the bar?

The best way, I'm sure every bartender will agree with, is the non-confrontational way. Just say, "Try again tomorrow." Be really polite and still treat them like a customer — I think that's the most important thing. Once you cross the line to getting emotional, they're going to pick up on that and go with it.

As a patron, I saw a bartender, who I didn't know at the time but was pretty legendary as it turns out, getting naked at last call. He got up on the bar and started throwing ashtrays around and kicking drinks and saying, "It's time to go" and doing a dance along the bar. It happened once or twice during his tenure here, but there's lots of legend around it. It was pretty awesome. He got our attention and made us leave.

What's the biggest no-no in a bar?

One of them is explaining why you can't tip better. We actually don't care. We don't think about it. What we think about is at the end of the night [when we tally our tips]. To explain it is pointing it out to us. At the time we're usually pretty busy as well. It washes out in the end — it's cool. We don't need the explanation. Just pay for the beer. If you leave stuff, great. If not, whatever. It all washes out to us making our money in the end anyway. It's not a big deal.

One thing that is kind of a no-no here is asking for a martini or a cocktail. Because the answer you will often get is, "a shot of tequila?"

Labatt or Molson? Neither

Beer or hard liquor? That's pretty easy. [It's beer for the record]