Get to know a bartender: Brit Maguire of The Comrade

Brit Maguire started her career in cocktails within throwing distance of her current gig at The Comrade. Granted the drink didn't get more complicated than the odd rum & Coke, and the stools were decorated with the kind of down and out drunks you see less and less of in Leslieville these days, but it was a start.

At the time Maguire had just joined the city's population of small town expatriates — her's is Tilbury, Ontario, population 4,000 and shrinking — who make their way to Toronto to drink up all it has to offer. These days of course, Maguire is designing distinguished cocktail lists and providing the drinks, now as a head bartender, to a different kind of Leslieville local. I stopped by The Comrade last week to find out more about her life behind and beyond the bar, but we mostly just spent the time talking about basketball, Jeremy Lin and horse racing.

About four and half to five years.

What drew you to it?

The money drew me to it in the first place, then I just fell in love with it. I moved to the city after university and kind of needed a job right away so I worked at this really sketchy hole-in-the-wall. You worked alone and served and bartended, but I mean, you were really only making rum & Cokes and opening beer.

And from there you came here?

Yeah, it was just across the street so over time I wiggled my way in here.

Did you have an interest in cocktail culture already?

Never, I always liked to drink [laughs], but I didn't have any interest in, say, cooking or making cocktails — that's just sort of evolved in the last three years. 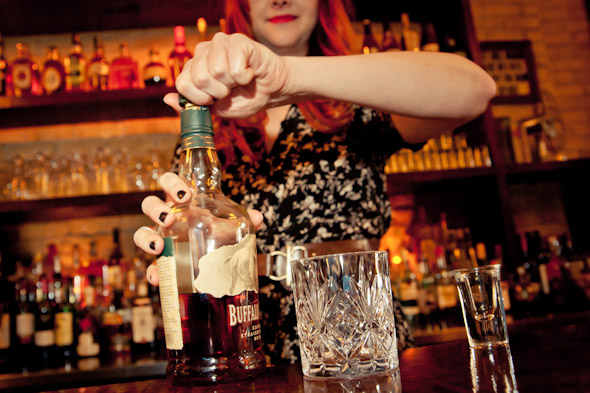 What's the best thing about working in a bar?

Meeting a lot of people, especially in a small neighbourhood where everyone knows each other. It's like a nice little family, not like a small town where people know your business, it's just really friendly. I also just really like imagining I'm this old monk, making weird medicines or something.

The hours. Trying to have a life like anyone else is nearly impossible. I'm pretty boring, I get home at 3:30 and I'm in bed no later than 4 a.m. and I'm up pretty early because I don't like to sleep in too much and waste the day.

So no late night parties?

Our shifts here are 10-11 hours so after that you just want to go home. Sometimes we'll stick around and have a few drinks and just chat, but most of the time it's just home to bed. 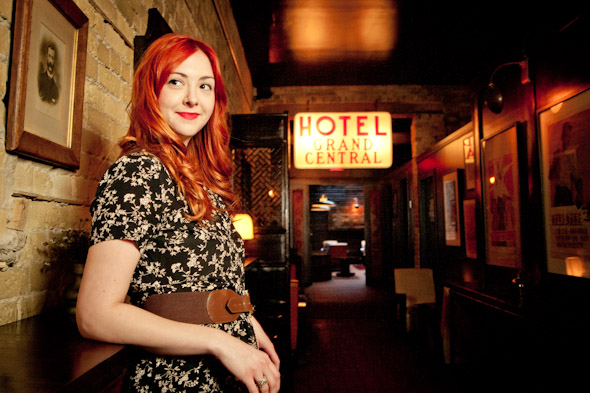 What is something about you that might surprise people?

Are you suffering from Lin-sanity?

Yes! Of course I am! This kid is crazy. Six months ago he was in the D-league, which is like, okay, but you're never starting, never signed to a team. So the Lakers considered signing him when he was a rookie, but they didn't so then the Knicks ended up getting him. For the past six months he's been playing for the Knicks, but then for the past seven games he's been starting and since he's started the Knicks have been 7-0.

Like, 38 points! Nobody does that. That's like Kobe, LeBron, almost nobody can do that in a game. Fastest rising franchise, it's going nuts.

What brought you to Toronto and what keeps you here?

I came to Toronto to be a writer, but what keeps me here is friends and family. I come from a very small town, but I'm really a city person.

I come from a town called Tilbury, Ontario. It's near Windsor, it's a town of 4,000 people--and-shrinking.

Do you visit often?

As soon as I moved away to University my family moved to Windsor, so I don't go back to Tilbury very often. I went back in September because my sister still lives there and it was crazy how small it's getting. I don't know if I'm just used to the city now — no, I'm not. It's so much smaller, where there used to be a main street, there's just nothing now. It's crazy.

No, not really. We have a farm with horses, like racehorses — standard bred — and I find that that's home. When I go see my horses, I don't get to very often anymore, but like going to the races or going to see my family in that capacity, that's more of a sense of home.

Do you ride horses?

They're race horses so you can't really ride them. I mean, standard breds have the buggy on the back, so I've ridden on the buggy. 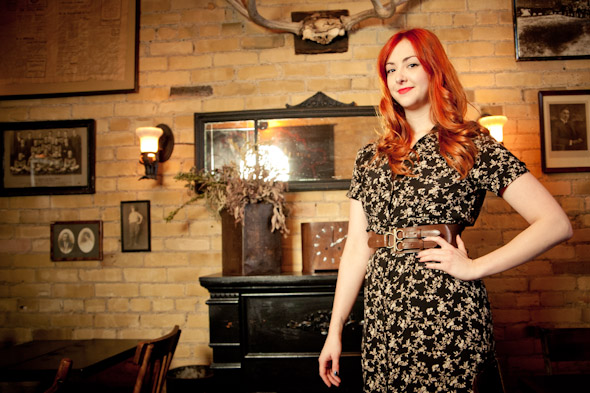 So do you go to the races?

Yeah, actually I've met some friends in the city who own thoroughbreds, so between the summer and the fall we — once a month we go up to Woodbine and bet on the horses and make it a day. We'll probably start again when the weather gets nice because it's nice to be outside. I actually named a drink after one of the horses I won a bunch on money on. It's name was Signature Red and I have red hair so I was like, "that's my horse!" I don't know, I think I bet $5.00 and won $50.00 or something.

Any weird stories from the track?

Yeah, I saw this guy go up [to the booth] one day, it was just a Sunday afternoon at the track and this guy, he was kind of like just this dude wearing a baseball cap, and he walks up and slams down $8,000 — in cash — and then goes "horse is chump," and just walks away! Like what does that even mean? So now when we throw down our $2.00 bets we say, "Horse is chump!"

There hasn't been too many weird things here I don't think. I don't know, we're fairly normal here. Although, you know, it's been a ladies bar for so long — I mean only ladies have worked here — but we just hired a man and he's a very attractive man, and the women are so aggressive. I've found that a little strange to deal with. I had no idea women were as aggressive as they are. Women will grab him and send him weird notes, bring him treats. I mean, they'll ask for his number every day. Every day that he's working he just gets hit on left and right. Women are the new men at bars.

What is your drink of choice?

I like an Old Fashioned if I'm going to have a cocktail, I mean if there's a list I'll try things out, but beyond that I just always go for a Guinness.

I love The Only Cafe on the Danforth, I mean I'm an east end girl anyways, but it's just so great there. They have a pinball machine and great beer; it's dark and separated from the world. 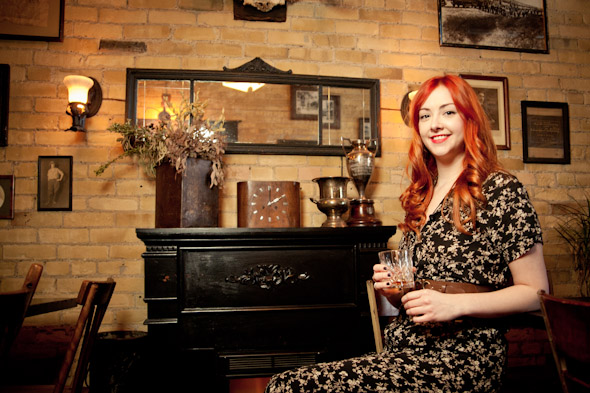 Straight Up or On the Rocks? Rocks

Olives or Twist? Both