Get to know a bartender: Tommie Cheng of Cocktail Bar

Tommie Cheng might be relatively new to slinging drinks, but you'd never know it walking into Cocktail Bar. The always impeccably dressed bartender has the disarming demeanor of a seasoned professional.

After years in retail, he got into the hospitality industry by way of the dish pit at Cocktail Bar's previous incarnation, the Hoof Cafe. After a few months, Hoof Matriarch Jen Agg must have recognized a glimmer of said demeanor and the transformation began. He started as a server and soon enough, graduated to bar duties. Since then he's been refining that attention to detail while filling out his fledgling resume to boot. When not crafting one of the city's great Manhattans, he can be found moonlighting at Woodlot from time to time. That and, of course, working on his Star Trek DVD collection — go figure.

I caught up with him on a rainy afternoon to talk cocktails, video games and the highs and lows of hospitality.

How long have you been bartending?

Not that long, about a year and a half, but I've been in service for about three. Believe it or not, the Hoof was my first job [in the industry] — I started dishwashing here.

What drew you to the industry?

I had been working in retail for basically the majority of my adult life and just got kind of sick of it. This was something I always wanted to do — working service, working for good people — so I literally walked in and they were like: "do you want to wash dishes?" So I did for like six months, Jen Agg saw some potential in me I guess, and I started doing some serving then some bartending. And ever since, I've loved the idea of taking raw products and mixing them, not just harmoniously, but having the end product be greater than the sum of its parts. It's just amazing. 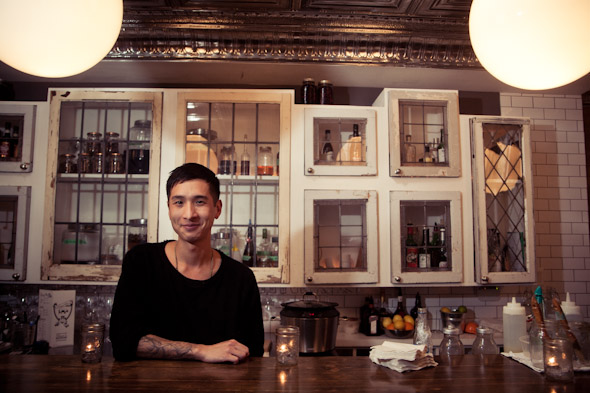 What do you hate about it?

I don't' know if there is anything I necessarily hate. There are definitely times you feel tested or tried by the process, but I think the most challenging thing is to be able not just to serve a fabulous product, but to be able to relate to people at the same time. Obviously they're both really important, but to be able to maintain that high level for eight, nine, 10 hours of service so that the 150th person has the same experience as the first person — that's definitely the most challenging part.

It depends on my mood. I've recently been really into Sazeracs... I find that cognac and absinthe blended together can be so beautiful. I also really like a Boulevardier, which is basically a bourbon Negroni. I love the bitter and sweet of the Negroni itself and then to add that kind of caramel-y, smoky element — it just takes it to a whole other level.

Luckily, I think the way the area is developing and the type of customers we get — I know it sounds kind of silly, but not serving vodka does kind of help filter people out — I think I've only ever had to cut someone off once. But I deal with it as gently as I can, and with a smile on my face. I very much believe in killing people with kindness, I think it really does work if you do it in a firm, but confident way. People can be very reasonable if you connect with them on a very basic human level. It's just what I've got to do. I mean, I don't think I'd be able to physically throw someone out anyway. 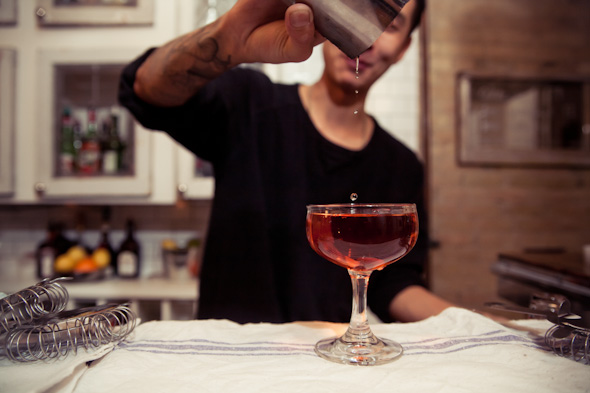 What do you do with your free time?

I'm very much a homebody. I stay at home, read, go to the movies. I'm really into video games [he's very close to finishing Portal 2], I love sci-fi and fantasy, I'm working on my Star Trek DVD collection. I'm a huge nerd. I know it sounds stupid, but these are the things I enjoy outside of bartending. I actually don't go out very much considering how much I'm here, kind of facilitating everybody else's weekend and good time, I end up not really going out a lot myself.

When you do make it out, what's your favourite bar/restaurant?

Magpie is really good, it's just down the street and they have some really amazing live bluegrass nights and really good beers on tap.

Food wise, I really like a good bowl of Pho. Honestly, when you get a good bowl of pho — it's cheap, it's delicious, it's fantastic, and one of my favourite places to go is Pho Linh at College and Dufferin. They make a fantastic bowl of house pho — get the house one with tripe and tendon, beef balls all of it. It's so good.

What drink do you hate making?

Although I love bourbon, it's Bourbon Sours. It's not that I hate making them, but having to shake egg white over and over again can get a little bit tedious after a while. So yes, if I had to have a least favourite drink, that would be it. 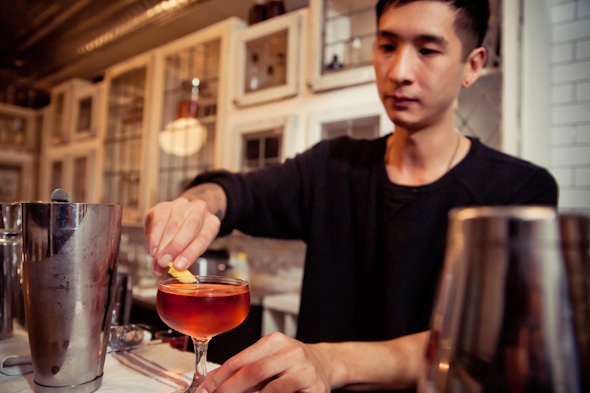 Straight Up or On the Rocks? Neat

With a twist or olives? Olives