Get to know a barista: Aerin Fogel of Mercury Espresso

I met Aerin after work on a crisp Friday night. Instantly, like basically everyone at Mercury, you pick up that she's a confident conversationalist. A natural skill that has been honed by slinging espresso it would seem. She's assertive yet patient. Reserved yet engaged. She also has a subtle flirtatious-streak side, though not in any overt way — just faintly on the periphery. With her tied-up black and blonde hair, quick responses and a table in the middle of Mercury, we had the following discussion about life as a barista.

About 10 years now. But working in third wave shops for five of those years. In the very beginning I worked in this little cafÃ© in The Beaches called Shenanigans, which is the worst name ever for a cafÃ©. But I was 14, so who cares? Probably my first coffee job that I really enjoyed was working at Manic five years ago. I've been here at Mercury for about two and a half years. So yeah, stuck here.

I really appreciate people who make eye contact when you're talking with them. Also someone who answers candidly to a question. You can tell when someone is really present and engaging with you or just kinda firing off an answer they would give to anyone. So it's nice when someone is actually engaged in a conversation. It's an added bonus for me and more exciting when someone takes an interest in the coffee they're drinking. But they don't have to. Just someone that is curious about what they're paying for and putting into their bodies. 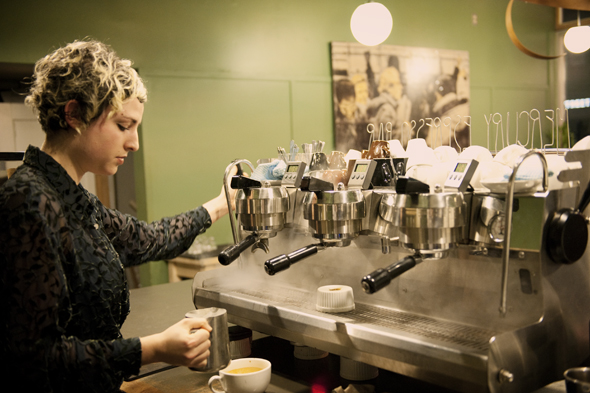 I don't think there is a perfect shot. Your taste buds are going to change depending on what you have just eaten. Or what kind of mood you're in. But, I think the secret for pulling consistently good shots is at least having as much control over different aspects of the shot as you can. We weigh the dose that we put into the portafilter, then we time the shots, and then a lot of the time, especially for smaller drinks, we weigh liquid mass to control the output. I mean, there are so many variables that if you insert control into as many aspects as possible, you're much more likely to come out with something consistently good.

Do you moonlight as a writer, actor, artist and/or adult film director?

Two of those things. I'm a writer and a musician. I write fiction. And I also play drums, bass, saxophone and I sing. I was playing in a band for a few years called The Bitters. It was kind of like a co-produced thing with a friend of mine that plays in Fucked Up [Ben Cook]. So his time is much more taken up by that. That was probably the most involved project that I've done. I'm kinda in between things right now.

For writing, I've started publishing short stories... this while I'm distracting myself from a novel I'm stuck with. I've been working on that for over two years now. It's quite a beast.

I don't really know if there's an answer to that. I'm not necessarily that extroverted, but I'm really honest with people that I care about. Keeping secrets makes people feel guilty about things, so I don't really believe in keeping secrets from people. It's not that everyone knows everything, because I'm definitely not like that. But between my close friends, I wouldn't say that there's still something they don't know about me. The full disclosure honesty policy. 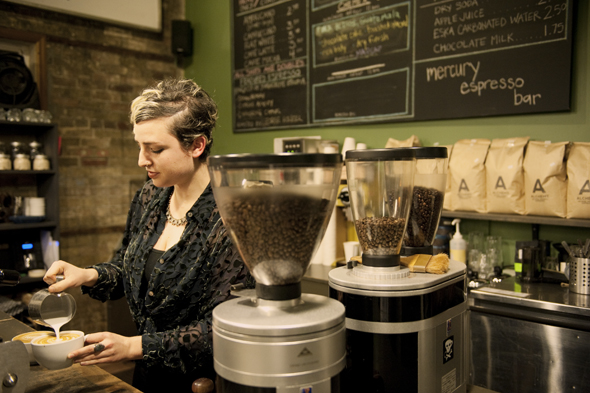 Well I grew up in the Beaches, so going back to the boardwalk, hanging out by the lake is a really nice feeling of coming home. It's comforting. At certain times of the day and certain times of the year especially, it's really quiet there, so it's a great place to hang out. I have an "East End" tattoo. It's on my foot. Want me to take off my sock? That might get weird.

Do so not on your cell phone. We have a no-cell-phones-at-the-counter policy if you look at our cash register. It's nice to have the safety net of a sign on the cash register so I can just point to it. Or usually I'll just side step them and go to the next person and wait for them to finish. I'm not trying to be rude; it's just easier to communicate with them.

There is no secret to order an Americano. I'm not trying to be a brat... however you want to order it is fine.

Usually I'll either drink straight espresso shots or I've also really been getting into manual brew methods. Like Chemex and AeroPress. So moving away from espresso drinks into manual coffee. It's fun. 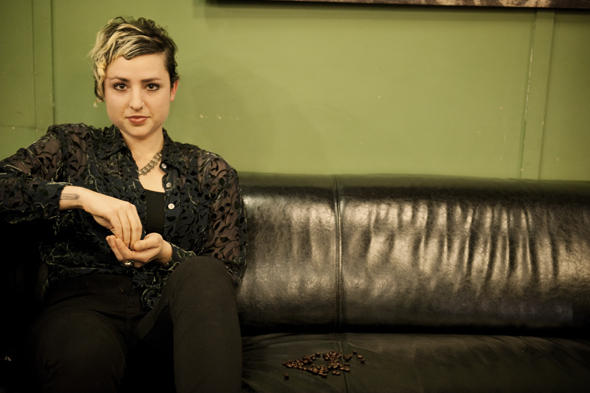 Dogs or cats? Cats for sure.

Paris or London? I guess Paris. I'm not interested to go to either though.

Beards or mustaches? Definitely neither.

PREVIOUSLY IN THIS SERIES: