Toronto through the eyes of Councillor Kristyn Wong-Tam

With her election in October, Kristyn Wong-Tam replaced long-time Councillor Kyle Rae in Ward 27, one of Toronto's most diverse districts, which includes Rosedale, the Village, and much of downtown Yonge Street.

Wong-Tam was born in Hong Kong but grew up in Regent Park. She has worked in real estate, owned a Timothy's franchise, and done advocacy work for LGBT groups and Toronto's Asian community.

During the 2010 campaign, Wong-Tam was involved in controversies over her involvement with Queers Against Israeli Apartheid (QuAIA), unions, and the NDP. Towards the end of the campaign she was also accused by her Ward 27 rival, Simon Wookey, of exceeding campaign spending limits. Her team has, however, consistently denied any wrongdoing.

Wong-Tam narrowly managed to beat her rival Ken Chan, who was endorsed by both outgoing councillor Kyle Rae and mayoral candidate George Smitherman, by 458 ballots, taking 28.2 percent of the vote.

I live in Ward 27 and first met Wong-Tam over half a year ago at a council debate called "So you think you can council?" Although Chan always struck me as a serious contender, I always knew Wong-Tam would pose a challenge to his campaign. Her organization, familiarity with the neighbourhood, and competence stood out from the get-go.

In the second installment of our interviews with Toronto's new city councillors, I sat down for a chat with Wong-Tam at her office earlier this week. Here's what we talked about.

You've been a city councillor for two months now. What's an average day like for you?

[In a week, I'm here] anywhere from five to six days--and during a few weeks it's seven. It has everything to do with the volume of paper and the reports that are being generated. I get here around 8:30am, get up every morning around 6:30, and I will often times stay here until nine or later...so the days are long, without a doubt. And even if I finish my days here at nine, if I don't finish my readings here, I take them home (people are going to think I have no life!).

Don Cherry's speech to City Council was very partisan. Is council as divided as that speech made it sound?

[At the time], I didn't think so, especially when I had nothing to gauge it with. As a new councillor you're just walking in and ready to work and cooperate with everyone. And I think every new councillor you speak to truly wants to cooperate, regardless of where you may sit politically...I know [council's polarization] gets talked about often in the media, and there are times where I feel, perhaps, the dogma has taken on a greater role of importance... 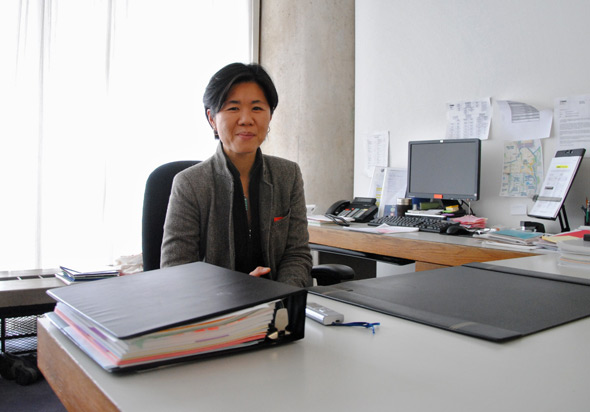 When people refer to you as part of a left-wing faction how do you feel?

I think for labelling and short strokes to sort of 'brand' someone quickly it might be a convenience factor because people want quick identifications...I've had some people say "Kristyn is the raging capitalist" and at the same time "Kristyn is a left-wing councillor."

I totally understand that for people who don't have the time to really analyze policy and sit down and think about how we're going to build a city proactively, short strokes and immediate identification might work, but for long term fostering of discussion, dialogue, and good policy it won't get you very far.

How has Rob Ford handled the 2011 budget process so far?

I haven't seen much of Ford during the budget process, which to me was rather surprising because this was his opportunity to really display his leadership...I'm kind of surprised I haven't seen him stand up and defend why the budget is framed the way it is, such as how the bus route cuts will affect local communities, what will happen when we dismantle the policies for disenfranchised neighbourhoods. So I'm a little bit surprised because this is the most important document that the city will produce...

I [also] disagreed vehemently with the expedited budget process. I thought that...we need to go through a proper public vetting. We need to also recognize the fact that there are many new councillors who don't just need to familiarize themselves with the budget, they need to understand the workings of the corporation, with the many different departments, the layers, and how the different departments intersect with one another to deliver city services. [The budget process] is a bit backwards...The city budget is now set but all the new councillors are getting their briefing from the departments now.

So do you see many disadvantages to being a new councillor (versus one with more experience)?

Ironically enough, I actually see the disadvantages as advantages. On one hand you may not know the bureaucracy as well as you should...[and] I don't have the same personal relationships [with city staff] that an older councillor has...Those could be seen as a disadvantages. But for me, I see it as an opportunity to learn and to really study the different departments, and get a sense of the different staff and how they intersect with one another. 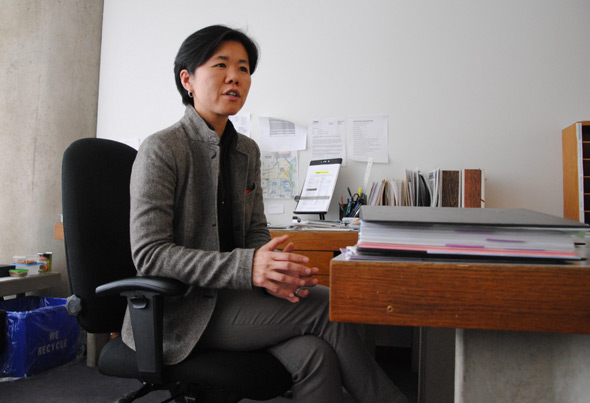 It's been about half a year since the Jarvis bike lanes were installed. How do you think they've worked out?

I'm not sure they've made everyone happy. I think car drivers might have become accustomed to the extra waiting time. We know in the summer months there are more cyclists using the lanes and right now there aren't that many [cyclists]. As I walk through the neighbourhood and I see cars waiting, I can sense that when they look at those bike lanes and they're completely empty there's an overall sense of frustration.

The roll out of [the bike lanes] was completely mismanaged in my opinion because we didn't have proper public consultations and we didn't look at the impact of the removal of parking for the businesses on Jarvis.

[Some say] Jarvis is supposed to be a traffic corridor, someone else says it's a cultural corridor because of the old mansions, or it could be a business corridor because of the wide open sidewalks...None of those conversations took place. There was a Jarvis Streetscape Improvement Plan that...talked about the beautification of Jarvis and making it greener by planting trees. [In the end], not a single tree was planted and we got $65,000 worth of bike lanes.

You're on the Board of Directors for Yonge and Dundas Square. What's your vision for its future?

I'm a new member to the board and they have a strategy that evokes the feeling of "bright lights, big city." I have my own personal opinions with respect to billboard proliferation and light pollution. I know these might contradict the goals and overall mission of Yonge and Dundas Square.

I'm interested in finding out whether or not there's a balance that can be met. At this point I'm not going to barge into an existing board of management and tell them what to do. I'm much more interested in finding out what led them to the decisions that they made. There's no doubt in my mind that Yonge Street is a very commercialized area, and so it should be. It's the main shopping, commercial, and main street of Ontario. But I'm wondering if there's room--and I think there should be--to green the space, improve it, and learn to animate the space without large events.

I know there is the business case model for large events because it's one-off and it's much easier to rent to one big cultural or event producer than to manage a number of small little merchants. But I'm wondering whether there's a way to strike that balance...

Why did the Empress Hotel become so neglected? How can we protect other heritage buildings from the same fate?

On one hand the general public wants to blame the property owner, but I think that's too simplistic...there were a number of missed opportunities. [I support] incentives that help [property owners] preserve their buildings...It's very expensive to maintain an old property because the structures are different and the technical components are different.

The city needs to start looking at heritage buildings as a cultural asset. The onus is not just on the individual property owner, we all have a collective responsibility because we reap a collective benefit if that cultural asset is maintained and preserved.

What do you think is Toronto's greatest shortcoming?

I want us to have a global attitude. I want us to think about building a city that is going to be an economic player and not just from a regional perspective. I'm not just interested in competing with New York; I want us taking on London and Shanghai as a global city. I'd like us to think in that way.

Right now we kind of flirt with the idea, we might talk about it amongst ourselves, but then we say things like "we can't afford to be a global player."