Toronto Through the Eyes of Matte Babel

Anyone watching CP24's morning show, CP24 Breakfast, will recognize Matte Babel, the Toronto-born TV personality. Originally starting out as a co-host, he moved to the remote host position, and can now be found in on-location segments all over the city.

His most memorable segment, IMO, was during TIFF when he encouraged Jonas Brothers-spotting teenage girls to run screaming towards a Yorkville Starbucks, inciting a flock of middle-aged women and teenagers to run towards a fake celebrity spotting. Babel, of course is a veteran of handling screaming, from his previous gig as MuchMusic's MuchOnDemand co-host, perhaps the biggest shriek show on television.

Why did you take the gig as a remote host of CP24's morning show after starting as a co-host?

I don't know, it's just a better fit. It gives me more experiences. At Much I was used to a pretty fast paced environment. Sitting at a desk for a long period of time was a lot different, so it was a good change of pace and it leveraged my strengths that I developed at Much. It wasn't as much of a shocker and it eased me into it a little bit more.

Do you miss the screaming teenagers at MuchOnDemand?

Not really, to be blatantly obvious with you. It was fun while it lasted and it was a great learning experience but there's a time when you outgrow it. I miss the people. The people were good to work with, but you know I had my time and I enjoyed it and now I'm on to something new.

I live at Yonge & Eglinton.

What are some of your local haunts?

To be honest with you, I moved there about four or five months ago. I still have some staples from when I lived in Liberty Village. One is The Beaconsfield. Uptown, one of the spots I really like to eat at is a small family run spot called 7 Numbers near Eglinton Avenue. That's a spot I really like. It's a cozy spot. It's quiet and you can go for wine.

Another spot I recently found is a chain from out West, and I'm not typically into the whole chains thing, but they create a pretty good atmosphere - Joey at Don Mills. There's a good breakfast spot near my house called The Homeway. It's a little local breakfast spot where you get stuff you need after having a rough Friday or Saturday night.

And there's a spot that I go to that is the equivalent of crack in the food form and I think everyone in the city needs to have it. It's a souvlaki spot that I've never had anything like. It's called Esquire Restaurant. I drive from Yonge and Eglinton to get it because it's to die for. It's on Victoria Park and Sheppard. It's unbelievable. It should be one of the things everyone should do before they die - have a souvlaki dinner at Esquire.

Where do you go out for that rough Friday or Saturday night?

It's weird. I don't go out as much as I used to because I'm an early morning guy now. I pick my spots to go out at night and look for functions that I'm really going to enjoy. It definitely has to be worth it. I would say a lot of times I go to Yorkville or I go to The Beaconsfield, I go to Queen West. Queen and Beaconsfield is probably my favourite part of the city.

I discovered a new spot with gorgeous decor which I think could be really popular. They flew in a lot of hand-made artifacts and stuff from Morocco. It's called BerBer. They just did a new lounge downstairs which is just incredible.That's a spot that I'm frequenting more and more as of late.

What stores do you shop in?

I only shop at one: Nomad. It's the only store I really go to. I find stuff that's not too far removed from typical trends but it's removed enough that it's still unique and they have it at a very decent price point in comparison to some of the bigger stores around the city. The odd time I go to a place called Sydney's on Queen Street as well. Nomad is pretty much my staple. 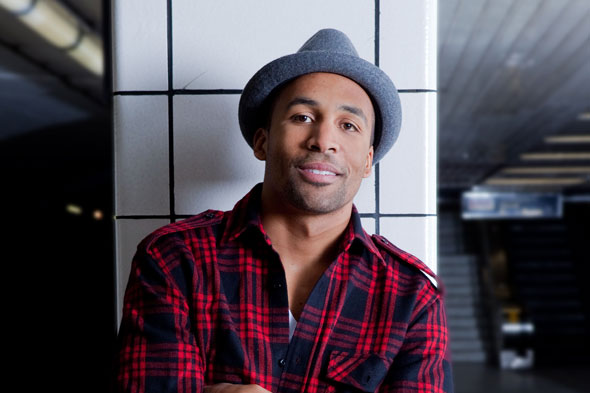 Are you a Raptors or Leafs fan?

I'm kind of a Raptors fan. I'm just disappointed right now in Toronto's sports in general. I feel as Canadians we provide all of this unconditional love and I feel like we're not rewarded. If you look at the Leafs and the Raptors there's no pressure to go out there and make something happen because they know we're going to keep supporting them regardless. For a city like Toronto that has all this support and so many people buying tickets - I know our attendance numbers around the league are pretty good - I just think there should be better players in the city and they should be doing better and give us a winning franchise.

As CP24's remote host you've gone on location to many different places. What has been your favourite experience?

I would say the craziest experience I've had at CP24 is when I went to the African Lion Safari. There are a couple fields adjacent to the actual park itself where the public can't go where they train all the animals. African Lion Safari is world renowned because they create somewhat of an authentic environment where the animals tend to flourish and reproduce. They train them like in the wild, and they run meat and stuff and let them chase down their prey. I was in a field when a cheetah chased down prey without a leash and I'm just watching it train, standing like a foot away from it. That was a little nerve wracking, but a good experience.

What's your favourite part of the city during the holiday season?

During the holiday season, I would say that Bloor Street is pretty nice. I just like this city in general during the holidays. It's festive, it's busy, everyone's shopping, and to be honest I like malls. I'm not a mall person at all because I like supporting independents, but I've got to say that during the Christmas and holiday season, the malls are so festive. Everyone's shopping and there are decorations everywhere. You feel like you're in the spirit and it's cozy inside while it's cold outside. It's kind of representative of what everyone's feeling. I would say the city in general is pretty festive and Toronto is one of those places, for me anyways, that really feels alive.