Toronto Through the Eyes of Jeanne Beker

Where there's fashion, there's Jeanne Beker. The fashion journalist and industry insider is seemingly at every fashion show in the world as the host of CTV's Fashion Television and pals around with some of the biggest designers and style icons. Hell, the woman has her own Bratz Fashion Reporter doll.

The busiest woman in fashion was born in Toronto and returned to live in the city after early years at acting school in New York City and Paris, where she trained to be a mime. You read that right, I didn't make that up. Beker was once poised to be a mime, after studying the silent art form with Etienne Decroux, Marcel Marceau's teacher. Realizing the money was in speaking out loud, she wound up working at 1050 CHUM, co-hosted The NEWMUSIC and then landed where she belonged, as host of FT in 1985.

Nowadays she's writing two books to be released in 2011, is a columnist with the Globe and Mail, served as judge on Canada's Next Top Model and also holds the title of Style Correspondent on Canada AM and etalk.

In between trips to Miami and Philadelphia, Beker found time to chat about where she shops, living on Sherbourne and yes, the art of mime.

How does Toronto fashion compare on the international stage?

Toronto has it all. We're a very eclectic city with disparate fashions in terms of people and their approaches and love of style. We have some incredible fashionistas in this town, some great people with great style that don't necessarily spend a lot of money on it, which is wonderful. There's a lot that you can access here in Toronto, everything from stores like H&M to great thrift stores and vintage stores so there's a lot of alternate selections to be made in the city. The people that I'm most inspired by are not necessarily the people who go to Bloor Street and spend hundreds of thousands of dollars on their clothes but it's the people who have a sense of style and know how to put it together. We have some style mavens.

What Toronto designers do you wear?

I wear a lot of Lida Baday, Joeffer Caoc and Rita Tesolin (she makes jewelry). I wear Andy The-Anh, he's based out of Montreal but he does have a shop in Toronto now. I wear Teenflo, which is a Canadian label out of Montreal and they have a couple of shops in Toronto. I bought some fabulous pieces at Corbo, a boutique in Yorkville. Michael Kale designed a fabulous gown that I wore to the Vienna Life Ball back in May. I wear Wayne Clark, David Dixon and Greta Constantine are two of my favourite edgy designers, I wear a lot of their stuff. I love Pink Tartan, Kimberley [Newport-Mimran] is fabulous.That's a pretty healthy handful of Canadian designers.

What are some of the local clothing stores that you frequent?

Honestly I don't shop at stores that much. I'm very lucky that I get access to showrooms and I'm so busy that I rarely get a chance to shop.

What are some of the general stores you shop at?

There's a little store where I live in the Rosedale area, at Yonge and Roxborough, called French Country. I tend to buy a lot of things for my farmhouse there. For gifts there's a great store called Putti and I've started doing some shopping at Teatro Verde in Yorkville. Of course The Room at the Bay has become a great point for inspiration but I can't really afford to pay those kinds of high-end designer prices.

Small Wonders is the pet shop I go to for my dog on the Danforth and my hairdresser that I've been going to, if you can believe this, for 30 years since I started on television in 1979 is Gregory Parvatan at Rapunzel and he's one of the best things about this city.

I love the Williams-Sonoma store because I love cooking. Every now and again I go there to get inspired or to buy the odd fabulous frying pan. 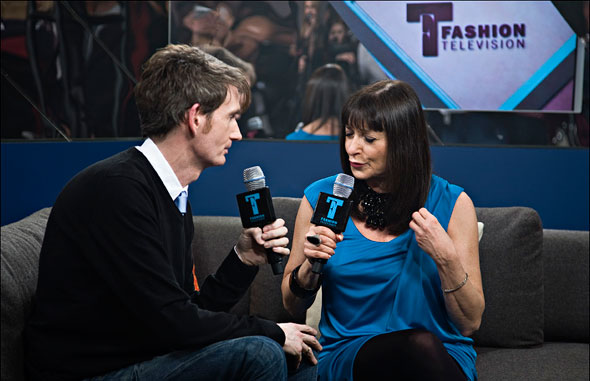 Speaking of cooking, where do you go for a good restaurant experience?

One of my new favourite restaurants is Cinq 01, at 501 College Street, that's a really cool place. Toufik [Sarwa] is the owner there, I met him originally at Amber, which is one of his great nightclubs at Yorkville and he's opened this wonderful restaurant with this great atmosphere and it's really quite a scene. I like The Harbord Room and Pastis is a great neighbourhood place for me. I love CaffĂŠ Doria, and sometimes I have breakfast at Patachou. There's a fantastic Indian restaurant, Sher-E Punjab on the Danforth, that has the best Indian food and [Taste of the] Silk Road is another place on the Danforth.

I love Sotto Sotto and Spuntini is a really great friendly place to go with a bunch of people. At Free Times CafĂŠ on College, Bella's Brunch is on Sunday mornings and sometimes I take my mother there and it's all-you-can eat Jewish brunch with Klezmir music, live bands and stuff. That's a really cool place.

For watering holes, I spend a lot of time at Avenue at the Four Seasons. There's also Caren's Wine and Cheese Bar on Cumberland. It's also really intimate and that's a great little place that I usually go to meet someone for a drink.

You travel all the time for fashion shows, events, charity balls, and more. What do you wish you could bring back to Toronto from other cities?

I guess I'd like to bring a little more of the antiquity that I find in Europe, the little winding cobblestone streets. I'd like to bring more of the architecture - I was just in Philadelphia last weekend and god I couldn't believe how gorgeous the buildings were. There are some fine old buildings here to be sure and some interesting inspiring new ones as well. There's some European architecture that really takes your breath away, I wish there were maybe a little bit more of that here. There's some parts of town that still aren't as beautiful as you'd like them to be and you really wish that could change but I think every big gritty city is going to be like that and you have to be living in Disneyland or something to be living in a city that is perfect in all counts.

I wish we had more jazz clubs here. I really really miss The Montreal Bistro, that was a favourite spot of mine. It's not that easy now to go and hear jazz. I go to the Drake sometimes but I don't know of a lot of really great jazz clubs in the city, and there may be some and I wish someone would tell me about them. I miss a great cozy little jazz club, like the Blue Note in New York or Montreal's Upstairs Jazz Club that's really cool but I haven't found a place like that in Toronto yet.

A recent Toronto Star article documented how Sherbourne was a "city in one street," which is both alternately bleak and home to swanky Rosedale, where you live.

Well Shebourne north is a very different world than Sherbourne south. The neighbourhood I live in is absolutely exquisite, but unfortunately, the name Sherbourne gives it a bit of a stigma but it just happens to be on that same street. That being said, I don't mind that just over the bridge there is this whole other world because I think it's that kind of disparity and edginess that reminds you that you are living in big bustling city and you're not living in suburbia somewhere. I don't want a sterile kind of existence and that's what's so great about Toronto, you can walk over a bridge and be in a totally different kind of scene.

I have to talk about the fact that you were a mime.

And now I never shut up!

What are the odds that Toronto would be a haven for mimes today?

I don't know, but it might be making a comeback! You never know, like the way that puppetry has made a comeback lately with Robert Lepage and the Nightingale. My daughter is a puppeteer.

I think there's a great appreciation of art in general here in Toronto although I still don't think it's on par with Montreal, maybe in terms of the more accessible performance art mediums , but I do think that Toronto is an okay place for an artist to be - if you're talking Canada. Canada isn't a great place for an artist to be, period. We don't get the funding that we need here for the arts by a long shot but if you're going to suffer in a city, I guess Toronto is okay. Personally I think I'd like to be suffering in Paris.