Toronto Through the Eyes of Shane Belcourt

Getting out of their father's shadow is something many young men wrestle with - and musician and filmmaker Shane Belcourt, son of MĂŠtis leader and activist Tony Belcourt is no different. But he's managed it better than most.

His award-winning 2008 film Tkaronto (the Mohawk word for Toronto) follows two characters as they struggle to maintain or recapture their Aboriginal identity in the concrete city. The heavily autobiographical tale prompted me to ask Belcourt about his relationship with the city.

Belcourt moved here from Ottawa at the age of 20 to study film at York University. When he isn't working on a suite of film and television projects including an animated documentary short, "Red Car, Blue Hood," (about growing up the son of a MĂŠtis rights leader), Belcourt is absorbed in the daily duties of family and fatherhood in his home near Pape and Danforth.

What three words come to mind when you think of tomorrow?

What's your favourite place to eat?

Hanoi Three Seasons (588 Gerrard St E or 1135 Queen East, at Larchmount). It's really fresh Vietnamese food and it's really inexpensive - put those two things together and to me you got a hit.

Cycle, take the subway or drive my car, probably in that order.

If you could tell City Hall to do one thing right now what would it be?

Continue to hammer away at their environmental policies... keep pushing us further and further. You know the recycling programs, it's excellent. People complain about their garbage cans, I think it's ridiculous.

Me, my wife and my daughter down in the Beaches, walking around, eating something out of some kind of food cart and just hangin' out.

What's the one thing or place people should know about?

The Native Canadian Centre, down at Spadina and Bloor a little north on Spadina. It's a community place for Aboriginal people in the city but they have a lot of things going on that are open to the public - drumming classes, language, classes, screenings and performances.

Where do you go to find nature in the GTA?

My wife and I really enjoy gardening so for us nature is right in our backyard, in our front yard. The great thing about nature is it's not like it's separate from you, it's inside your home as well as outside - the air you breathe, the water you drink... 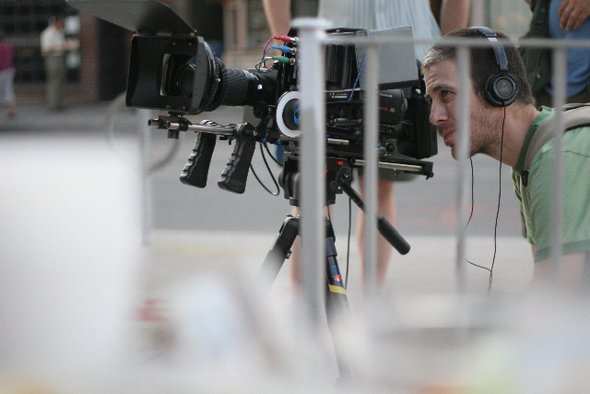 If you were describing Toronto to someone who's never been here, what would you tell them?

It's a really easy city to get around in, to find a place to live, to get some work and get yourself settled into. I think it's a pretty accommodating city... and it's actually a pretty open city.

What about the Greater Toronto Area, what's your favourite spot outside the city centre?

Yeah, outside the city center, I'm just like, keep drivin'. If I'm going to get out of downtown it's because I want to get to something more scenic, more outdoorsy, so I just keep rollin' right past the suburbs into some of the farming area and small towns north of the city in between Orangeville and Brampton - and if you're going to the east side I usually go all the way to Sandbanks or Prince Edward County.

For stuff it's Carbon Computing, I shop there for gear and looking at gadgets is always pretty fun. For food I like the Carrot Common.

Where do you go for inspiration?

I don't go anywhere specific. It's internal: a book I'll read, a film I see, conversations I have with someone, or just being with my daughter anywhere.