Toronto Through the Eyes of Andrew Johnston

After a slight hiatus, I'm happy to bring back our Toronto Through the Eyes of feature here on blogTO. For those of you that are new around these parts, the way this works is we cozy up to the city, exploring it through the eyes of a local celebrity, hero, do-gooder, or simply winning individual.

Photo above by Shawn McPherson courtesy of Andrew Johnston.

We live in an acclaimed city for producing top-breed comics, and is a great place for comedians to accelerate their careers, explains Andrew Johnston, as he sips his cup of tea at a coffee house on The Danforth. "Toronto is a phenomenal place to get into comedy. The opportunities that present themselves here for you are amazing," Andrew explains, and on a bigger scale, Canadian comics have a great reputation in the world because of the range of diverse options comics have to get up on their feet.

Andrew grew up in Brockville, Ontario and later attended Queens University in Kingston before making his way to Toronto to do a post-grad writing course at Humber College and then settling in downtown, "Really, if you're from small-town Ontario, and you're a homo, presumably, you're probably going to go to Toronto. That was kind of always the plan."

Johnston has had a number of big breaks as a comic since moving to Toronto a few years ago, including MuchMusic's Video on Trial, and appearing on several shows on Slice. 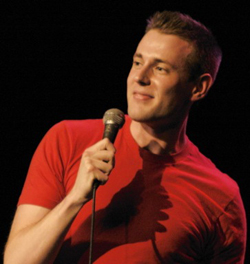 He recounts some of his best received show that came to mind, "I remember coming off the stage like 'that was amazing'" at Frosh Week at Ryerson in September 2006, "It was like people who got my language". And worst? "Homo Night in Canada," he jokes, "No, I did a show at Spirits and it was like walking to your execution. It was like 7 minutes of silence. I had to go first that night and I just accepted that, and set the bar so exceptionally low, but after that night I got it! It just clicked. I can match my wavelength to people now."

Even with the lukewarm reception Andrew thinks he's had during some gigs, he used the opportunities to learn about how to interact with the audience, "Stand up is like a dialogue. It's a one-sided dialogue, but it's still a dialogue."

Unlike some comedians, Johnston is totally unapologetic about his sexuality, but admits there are advantages and disadvantages to being openly gay and in the public eye, "I think it's been a more beneficial factor than anything because it's an untapped frontier. I've always been one to say that I think Trevor Boris and I, quite specifically, are the first gay comics who do not ask for permission."

Being a gay comedian also gives you a rather unique voice in the comedy world, one that is rarely overlapping with other comics' material. It has its downsides though, "It hurts when you do proclaim your sexuality and you attach yourself to that as a real-life character. People can't see you any other way, and that's still the very terrible situation we're still in."

Despite the very progressive and relatively open-minded society Canadians, and specifically Torontonians are privileged to be a part of, there's still a lot of work to be done, and Johnston thinks that gays in the public eye have a responsibility to set an example. "We need more people to represent the various shades of grey to show that we are vital and functioning members of society capable of doing things at every level of everything."

Though there's only so far sexuality-based comedy can take you, Johnston says, and that you can't totally rely on being gay as some kind of cute parlor trick. Many think they can pull it off though, "Every gay dude thinks they're the life of the party, and they are all so extroverted, but they don't realize is that you have to be broad. If you're gay and you think you can play the gay dude (on stage) and do well, hell-to-the-no you won't."

Andrew, like many comedians and other artists, is making use of his blog and the Web in general as a means of self-promotion. "It's revolutionary; YouTube for comics, and MySpace, before it died." 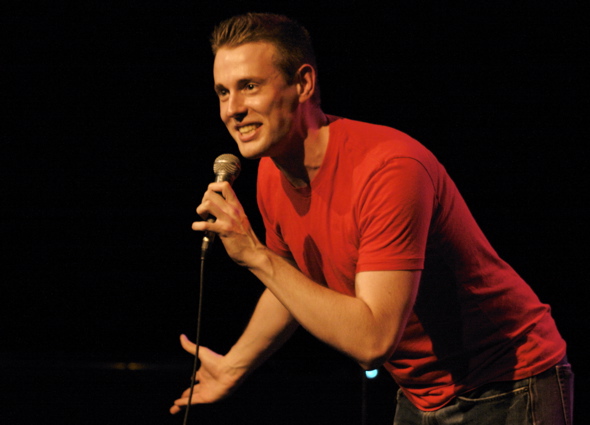 ...to unwind: "My parents' house in Brockville."

...to get inspired: "I wish I could say some nook and/or cranny in the Scarborough bluffs, but the God's truth that it's in my apartment with a bottle of vodka."

Everyone should know: "Blue and green should never be seen except for in the washing machine."

Biggest pet peeve about Toronto: "Too many teenage mothers on the TTC."

An ideal day in Toronto would consist of: "A brisk walk in comfy slacks, hitting up as many craft shows as my afternoon allows, followed by a good 'Murder, She Wrote' marathon. I have very elderly female sensibilities."

Finish the sentence "Toronto is...": "Like Jem & The Holograms, truly outrageous."

He's also performing at Straight Ahead Laughs, a fundraising event for Heterosexuals for Same-Sex Equality on Tuesday, July 17th at 8pm at the Panasonic Theatre (651 Yonge St.). Tickets are available through Ticketmaster. (Facebook event page)