Toronto Through the Eyes of EGR

'Erica' has hefty hankerings. Not any specific Erica, mind you, just 'Erica' in general. The name means "complete ruler" and, truth be told, blogTO thinks 'Erica' is aiming just a touch too high. Don't get us wrong, it's a lovely name and all, but the Erica's we know are nowhere close to ruling anything. (No offense to the deluded name.)

'EGR', however, now that's a name that means business.

And so it's fitting that Erica Gosich Rose, a young urban artist whose vanilla-flavoured name seemed ill-suited to her jalapeno-laced output, decided to adopt the EGR moniker for her artworld pursuits. For while the Erica's of the world were experimenting with makeup and painting their faces, EGR (pronounced 'eager') was experimenting with aerosol cans and painting public walls and trains.

EGR grew up in Burlington, Ontario, where her immersion in the creative field started at a young age. She took many drawing and painting classes, which sparked an interest in the visual arts. It wasn't until she enrolled in the Art Fundamentals and Illustration program at Sheridan College, however, that EGR really started to devote herself to her craft. While at school, EGR's already strong interest in graffiti and street art intensified, the aesthetics and concepts of which find themselves featuring prominently in her style today.

She moved to Toronto in 2000 but shunned the never-miss-a-beat tempo of the downtown core and chose, instead, to make her nest in the relative calm and quiet of the High Park area. While EGR is an enthusiastic Toronto fan--"I loved the vibe of [the city]; the mix of cultures, the diversity, and the buzz"--to hear her talk about her art, one can't help but wonder if real-world, physical surroundings matter much to the artist. Indeed, EGR is a head-in-the-clouds dreamer, who is happiest when completely submerged in her work.

"The best part of my work is having a connection to another world or realm when I'm painting, and when the image comes through just as I had it in my head, and makes sense in a way I wouldn't have thought," she smiles. "There is a lot of mystery in the artwork I create, and sometimes it's very revealing, exposing thoughts or fears that most people keep private. I love when people connect with the work and when they 'get it.'"

Pop culture and social references abound in the work of EGR and, though specific themes vary, the female perspective is a recurring staple. As women are still a minority in the boys' club of urban art, and EGR employs feminine motifs in her works, many consider her a pioneer in the streetart world. But the modest artist shakes off the comments ruefully.

"When I first started out, it was a challenge to prove myself. Today, there are still very few women in the game, but there are more now than when I first started. I believe, however, that I am a unique artist not because I am female but because I'm very versatile," she states flatly. "I can create huge aerosol murals, illustrate for various clients, and create fine artworks and installations. I'm not what I think most male graffiti artists would consider to be a hardcore graffiti bomber. I 'get up' in new ways and am constantly pushing my art to the next level, breaking as many molds and preconceptions as I can in the process."

Her works can be found in magazines and music videos, on crumbling city walls and in pristine art galleries. Indeed, part of EGR's appeal is her ability to bridge art, design and functional purpose. She is equally appealing to street art lovers, gallery curators and corporate art directors, and just as comfortable with traditional oil paints as she is wielding aerosol cans. The artist's talents have attracted an impressive roster of clients--from prissy Tiffany & Co. to car giant Toyota to local hip hop rag Pound. Galleries the world over have welcomed her work--this year alone, EGR has participated in five group exhibits (and flaunted her stuff in three solo shows) in locales as far as Australia.

For a 27-year-old, EGR's CV is stacked. The cherry on top, however, came when UK graffiti bible Graphotism approached her, asking her to grace their cover. The magazine ended up liking her work so much, a 20-page feature was devoted to her. "The book is so huge it weighs a pound," exclaims the artist.

How does she keep sane amidst all the commissions and personal projects? Easy: a trampoline.

"Ten minutes on that baby and I feel like I could take on a small army," she laughs. "And my friends, my friends keep me grounded." 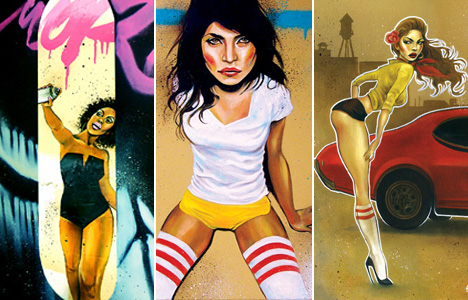 ...for lunch or dinner: I live ridiculously close to the best Middle Eastern restaurant, Ali Baba (2202 Dundas W, 416.538.7001), where they make amazing everything: falafel, shwarma, baklawa, you name it. The lineup often goes out the door!

...to unwind: Having spent so many years inhaling harmful vapours, I owe it to my body to visit the nutritionist at Dandelion Food and Herb (302-218 Close, 647.889.3302). My naturopathic doctor from Choice Naturopathic Services, shares the private space which is by appointment only. As well as nutrition advice, I receive acupuncture, and infra red sauna treatments.

...to get inspired: Riding my bike through Trinity Bellwoods Park in the summertime is amazing. I get inspired just by passing through the city, and being witness to the mix of cultures and lifestyles.

Everyone should know about: Bookmark EGRart.com for when the new site launches. I am so excited about the new version! Featuring Earthly Delights, my newest series which reflects our most worldly desires and fears, challenging the traditional notion of the garden of earthly delights. I'll be unveiling one-of-a-kind originals as they are created in the new year.

Biggest pet peeve about Toronto: The traffic. There have been a few times I could have been killed. There should be more public transit, at least at rush hour. You could get crushed by the swarms of people!

Finish the sentence "Toronto is...": the home of EGR Art gallery and studio, where I live and work.

EGRart.com will be relaunched in the next two weeks. The new website will feature an online art shop with originals and prints available for purchase, as well as other merchandise. Parties interested in touring EGR's studio/gallery can set up an appointment via email (gallery@EGRart.com).

Copies of the Graphotism issue with EGR on the cover (#36) can be purchased through Visual Orgasm.