Toronto Through the Eyes of Jay Malinowski

It's been a good three years since I last interviewed Jay Malinowski. Back then, the Bedouin Soundclash frontman was still a university student living in small town Kingston, Ontario, hustling for gigs, and groaning about his upcoming exams. The band had only one release under its belt, Root Fire (2001), recorded in one 12-hour go with the $400 the boys had scrimped and saved from playing college bars.

Fast forward three years and, my, how things have changed. Since the 2004 release of Sounding a Mosaic, Bedouin's breakout album, Malinowski, along with bandmates Eon Sinclair and Pat Pengelly, have been catapulted to music stardom. (Juno aside, you would be hard-pressed to find someone who doesn't get a goofy grin upon hearing the devil-may-care amble of "When the Night Feels My Song.") These days, the Montreal-born, Vancouver-bred Malinowski calls Toronto home. That is, when his schedule actually permits him to spend time in one fixed location. Bedouin's touring schedule will see the band in 11 different countries in the next month alone, playing in venues all over Europe. Not too shabby for someone whose definition of a good night, last we chatted, was pocketing $50 from a night of gigging at the local dive.

A budding career as a visual artist was what originally brought the Queen's fine arts grad to Toronto, though success on the music front is what has kept him here. Back in 2004, the owner of King East's Gallery Bibianne, after seeing some of his work, asked Malinowski to put together a show. Malinowski eagerly agreed and, with one pending exhibit secured, packed his bags for Toronto. He quickly found an apartment in the Annex and then worked for a month straight to create the two dozen pieces needed to make the exhibit.

The Bibianne show took place in October 2004, just a month after the release of Sounding a Mosaic. The album's sales climbed steadily, and its sleeper hit single "When the Night Feels My Song" went on to become the tune of summer 2005, reaching #1 on charts both at home and abroad. With critical acclaim and fan love pouring in, art took a backseat and Malinowski began touring extensively with Bedouin. He gave up his Toronto pad during this period and has, just this past month, returned to the city to set up shop. Where is he based now? Oh-so-trendy Queen West? Artist-infested Parkdale? Guess again.

"When I first moved here, I was looking for places but had absolutely no money. I was supporting myself with painting--a real money making venture," he grins.

"I found a place for cheap in the Annex, so it feels like my only home [in Toronto]. I thought about moving elsewhere this time around [...] but nothing else seemed like my hood," shrugs the Annex resident. "It's perfectly placed between College and Bloor, and I'm not so far west that it's a pain to get downtown. Plus, it's close to the best shish in town."

Writing for the new Bedouin record consumes much of Malinowski's time lately. Though the band has their next full-length complete, another recording session scheduled for December is pushing him to write more. The group is also featured on Vernon Maytone's new solo album and has a Bad Brains mash-up in the works. And then there are Malinowski's solo projects. He is currently working on material for the Culver City Dub Collective--"it's a cool collection of people doing a dub record"--a project that includes Money Mark, Ben Harper, and members of Jack Johnson's band.

"And hopefully I will be able to start working in a studio in my house again," sighs Malinowski wistfully. "I'd like to do some new paintings." Given the band's unforgiving touring schedule, it would appear that the man's an incorrigible optimist.

Can Toronto count on having Malinowski around for the long haul? The crystal ball is foggy on that one, though circumstances will keep this darling of the Canadian music scene here for the next couple of years at least.

"I will be [in Toronto] for a while. Everyone lives here: bandmates, friends, our manager; and, beyond that, the city is vibrant but somewhat harsher than Vancouver, It drives me to get on the grind and create more," he reflects. "I think eventually though, I'll go back to Vancouver. It's my home, and there just isn't a city I've seen that is more naturally beautiful. But that's for those Freedom 55 years...which will hopefully come at 30." 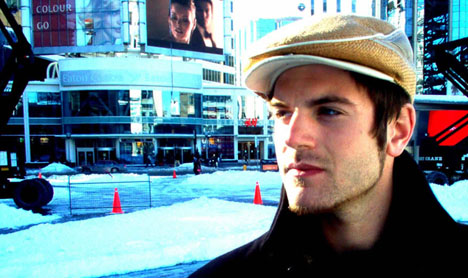 ...for breakfast: I like By the Way Cafe (400 Bloor, 416.967.4295)--they do really good goat cheese omelets. Plus I'm not a huge fan of filtered coffee but theirs is really, really good, especially on those mornings you aren't feeling right.

...for drinks: I always wind up somewhere on Queen West, which can be dangerously fashionable and thereby be absolutely no fun. A cold stock ale at the Horseshoe (370 Queen W, 416.598.4226) at a show reminds me of classic moments with Pat and Eon from years back. If it's just drinks though, we usually just go to a friend's house.

...for dancing: The Do Right people put on cool nights at Supermarket (268 Augusta, 416.840.0501) in Kensington on Saturdays. I could mention other places but, really, it's more about the people I roll with that makes the dance happen.

...to get inspired: I'm bringing the West Coast to the East Coast, but I'll go longboarding.

Biggest pet peeve about Toronto: The lack of public parks and green space, and the highways that border the city. I have no idea why someone would want to run a massive highway along the only waterfront Toronto has.

An ideal day in Toronto would consist of: I would wake up and play guitar or record for a few hours. Then, if it's nice, I'd go for a walk or longboard the city to Kensington and get a coffee on the corner of Augusta and St. Andrews and watch some people. After, I would meet up with friends for a late lunch and bitch about music, reviews, or something irrelevant. Go to Soundscapes (572 College, 416.537.1620) or Rotate This (620 Queen W, 416.504.8447) and pick up something new to rip off. On the way, I'd consistently ask myself how the barbeque ducks in Chinatown can get so red. I'd get to the store and listen to records, and then listen to record store person try to convince me that he knows more than I do about what I'm buying. Go home and look at a blank canvas that has been sitting there for a while and think "I should really do something with this." Of course, I'd then decide it's too late in the afternoon and start making plans to go out to a show. I'd dance around to new records on high for a good hour with a full length mirror, and then wonder if people think I'm vain. Go buy a bottle of wine and force my friends to listen to my new records that I knew about before them, and then offer them wine as a condolence. I'd go to a show, end up at the Bovine (542 Queen W, 416.504.4239) and somehow Jager gets involved. I'd end up trying to eat at Sarah's, but it's closed, so we have to eat at the Lebanese place down the street that isn't as good. The day would end with me lying in my bed and wondering if tomorrow will be the same.

Finish the sentence "Toronto is..." a 40 year-old lawyer with a mustardy hot dog.

Jay Malinowski is currently in Europe, touring with Bedouin Soundclash. Once he returns to Toronto, however, you will likely be able to find him chowing down at Sarah's on many a late night. (Or perhaps with killer dragon breath, courtesy of said establishment's wicked mean garlic sauce, the next morning...)