If you had all the money in the world, what would you buy with it? A personal jumbo jet? A custom mega-mansion? Millions of dollars worth of handbags for a "future wife" you haven't even identified yet?

Drake's been there and done that and so much more with the considerable amount of wealth he's accumulated over the course of his career.

From humble roots as an actor on the Canadian teen soap opera series Degrassi, Aubrey Graham has risen to become one of the most-succesful musicians on Earth — and sure, he enjoys the finer things in life,  but he's also known for being quite generous.

Remember when he gave away $996,631.90 to people all over Miami while filming the video for God's Plan? He hasn't done anything public on that scale since, but he did randomly just erase one fan's OSAP debt and give him a bunch of cash.

Toronto rapper BucksInDaCut started off 2021 on a decidedly positive note that caught Drake's eye in these less-than-jovial times.

"I'm having a good start to 2021 fam!" said the 25-year-old artist and public figure in a video posted to his own Instagram last weekend.

He then proceeds to count a stack of colourful Canadian bills for the camera, ending up with $1,300 and celebrating in his success.

The clip was reposted by 6ixbuzzTV on Tuesday. By Wednesday, it had racked up hundreds of thousands of views and a slew of comments — including one from @champagnepapi himself.

"Yo what's this mans PayPal I'm doubling that for my guy Bucks B," wrote Drake from his verified Instagram account on Wednesday. And he wasn't kidding. 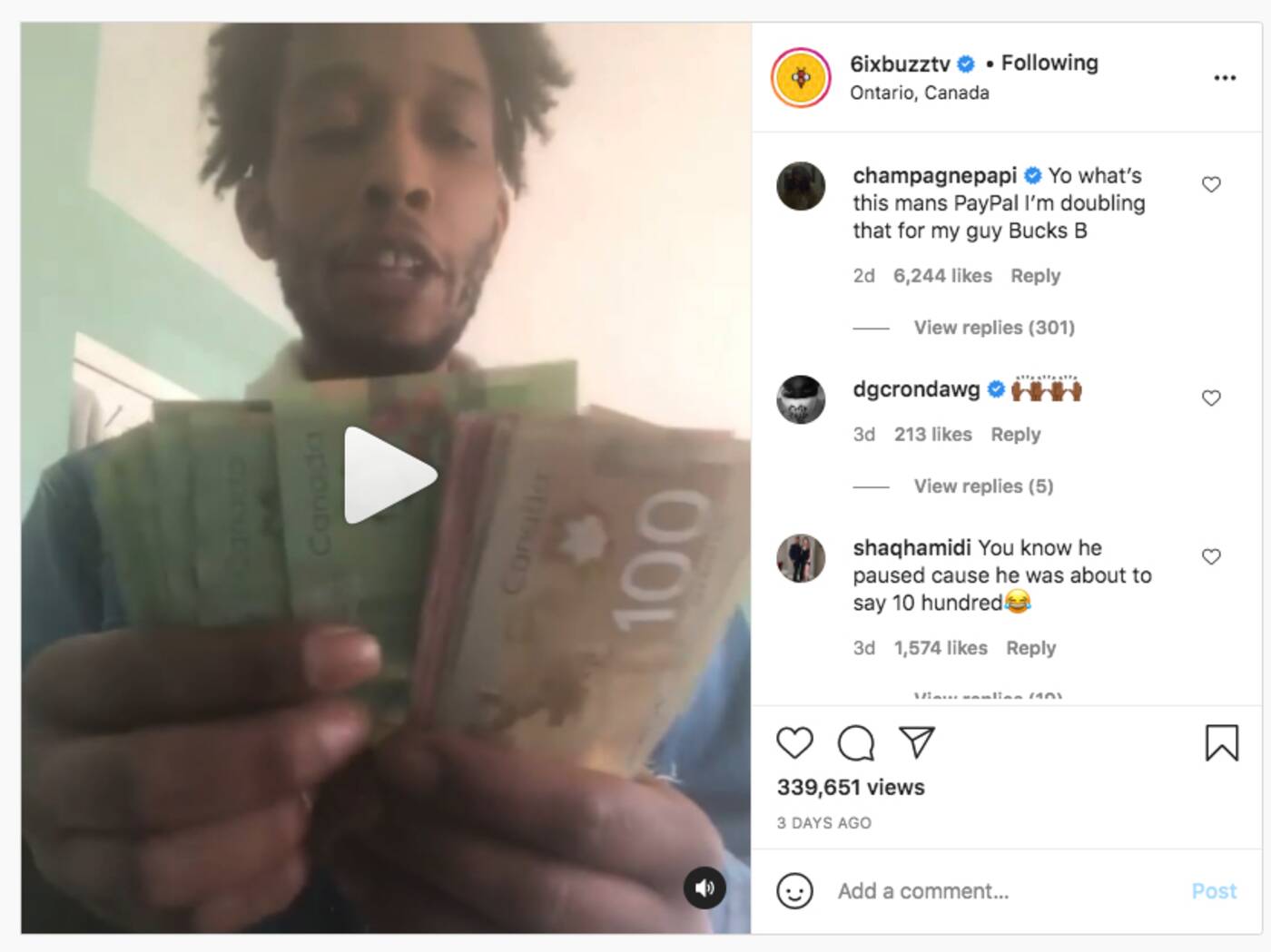 Drake publicly commented on BucksInDaCut's video after it was reposted to the popular local Instagram account 6ixbuzzTV. Image via 6ixbuzzTV.

BucksInDaCut, whose real name is Romello, posted an update video yesterday thanking Drake for not only making good on his promise to double stack of cash, but for offering to pay off his student loans as well.

"Yo fam, listen up, I gotta big up Drizzy, the one and only Drake, fam, he's a man of his word, fam, he doubled my money, and on top of that, fam? I told him about my OSAP and he cleared my debts, fam," he raves in the video.

"So I gotta big this guy up one more time, he's the biggest name in the city, fam, Drizzy Drake, fam, I'm trying to be like him one day...," says BucksInDaCut as he fans out a stack of bills in front of his face.

The young artist, who graduated from the Media Fundamentals program at Durham College in 2018, told blogTO he was amazed when he woke up to an Instagram DM from Drake asking for his email address.

Almost all of the money Drake gave him went toward his roughly $5,000 worth of OSAP fees, but BucksInDaCut promises that new music is on the way from him (he's already produced some 40 songs but only four videos, as they are decidedly more expensive.)

All in all, Drizzy shelled out around $6K to help his fellow Toronto man. Not a bad price to help an up-and-coming artist out... or to raise hype for your forthcoming album (as if it needed any promotion.)