Drake just dropped a $100 candle that smells like Drake

Remember when Drake sent custom-scented candles to a bunch of the Toronto Raptors while they were trapped in the NBA bubble?

As it turns out, those gifts were moulded in the image of Drizzy himself — or rather, some of them intended to replicate the way he smells.

The Toronto-born musician and entrepreneur has been famously gearing up in recent months to launch a mysterious new venture called Better World Fragrance House that, judging by a temporary landing page for the website, most-definitely involves selling candles. 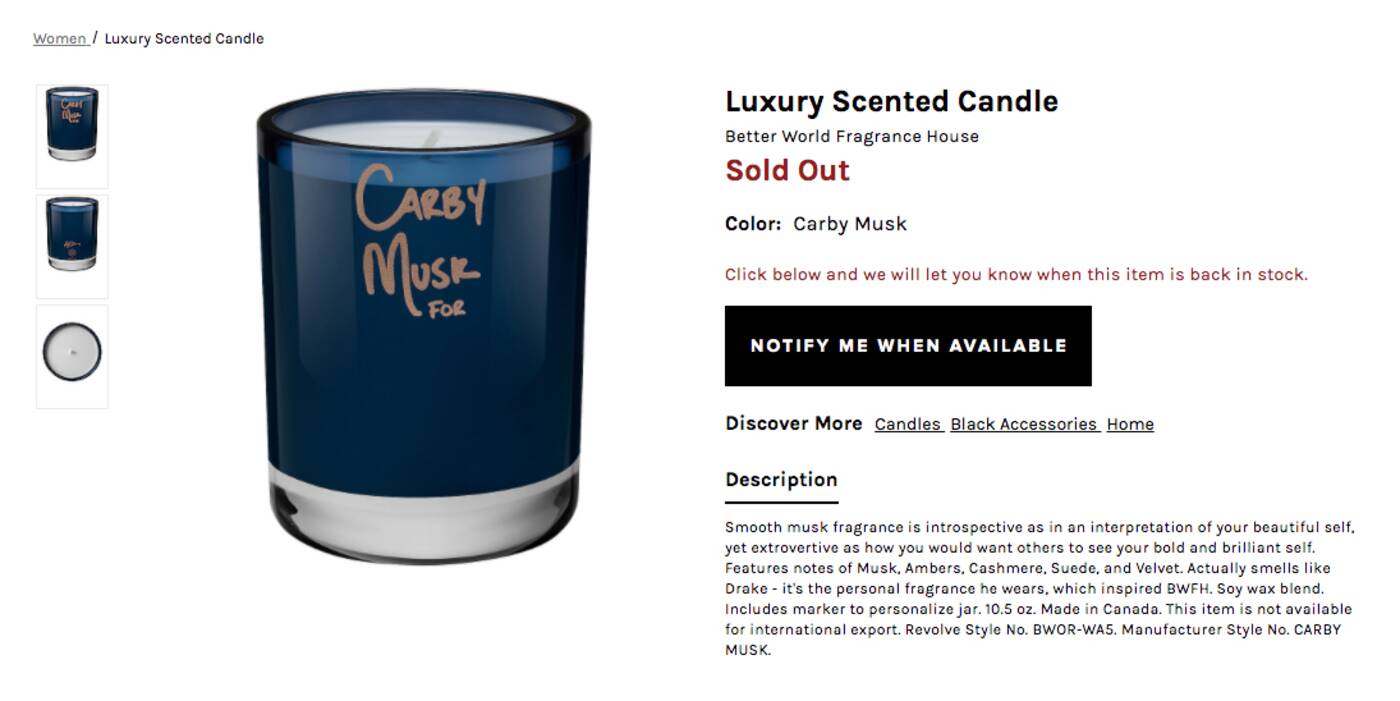 Drake's self-scented Carby Musk candle retails for $105 CAD on Revolve.com, where it is currently sold out. Image via Revolve.

While they have yet to officially hit the market, Drake's candles just made their public debut through a product listing on perfumer Michael Carby's Revolve page.

The fashion retailer had previously teased that it would be releasing a "limited sneak peek" of the five "ultra-luxe candles" that Drake will be launching his line with sometime over the holiday season, and they delivered this week.

Each candle is marked as "sold out" on Revolve.com, though it's unclear if they ever actually went on sale in the first place.

Drake coming out with a candle line is so on brand omfgggggg! But if you see a man with a Drake candle in his home, he’s evil ❤️ pic.twitter.com/zlj3cuDphQ

Whatever the case, we can now read the descriptions of all five candles online, and one, in particular, has captured the attention of Drake stans everywhere: Carby Musk.

Retailing for a staggering $105 Canadian, the Carby Musk candle is described as a "smooth musk fragrance" featuring notes of musk, ambers, cashmere, suede and velvet.

"Actually smells like Drake — it's the personal fragrance he wears, which inspired BWFH," reads the product description. "Soy wax blend. Includes marker to personalize jar. 10.5 oz. Made in Canada."

$15 for a Yankee candle/ $80 for a candle that smells like @Drake 😍 pic.twitter.com/giNlCmnRLK

Interestingly enough, the candle that "smells like Drake" is the most expensive of the bunch by far. The other four — named Sweeter Tings, Williamsburg Sleepover, Good Thoughts, and Muskoka — all retail for just over $60 each, according to Revolve.

Those of us who consider it a splurge to spend $18 on a candle at Winners won't likely be rushing to snap these up, but you can bet that some people are, especially after seeing them all over celebrity Instagram feeds.

No word yet on when the candles will officially go on sale for normies, but you'll be able to find them here.