The future of Toronto music festivals is cash-free

It's easy to shell out a lot of money at Toronto-area music festivals. Not only are tickets expensive, but drinks, food and merch are also pricey. And now that many of these events are cashless, you don't even realize how much you're spending. At least that was my experience at WayHome this past weekend.

The three-day music and art extravaganza at Burl's Creek Event Grounds in Oro-Medonte, Ontario was the latest local festival to go cashless. Instead of rooting around in your wallet for change, you either topped up your RFID (radio frequency identification) bracelet with money or attached a credit card to it so you never ran out of dough.

If you wanted to make a purchase, you double tapped your bracelet - it was simple as that.

Food vendors at WayHome were mostly pleased, noting how going cashless cut down on wait times for their customers. "It sped up the whole thing because to keep up with the massive lines at WayHome, you needed something very fast," says Jenn Burko who owns the Bake Three Fifty food truck.

Station Cold Brew's Mitchell Stern also recognizes RFID's efficiency, and was relieved it worked smoothly at last weekend's festival, especially since he's seen it backfire before. "If it works, it's amazing and if it doesn't, it's a shit show," he says, noting how businesses can lose out on a ton of sales if the system goes down.

But despite cutting down on queues, Stern says his staff didn't receive as many tips. That's a sentiment echoed by the team at the Saucy Pierogi. They did a brisk business all weekend and even had to run back to the city to re-stock their mobile kitchen.

With the tap-and-go method, attendees (myself included) seemed detached from their wallets and didn't care about the festival's rather high food and drink prices.

"People aren't paying attention, they're just ordering what they want," a rep at Saucy Pierogi tells me.

And most food vendors had to substantially increase their prices at WayHome. Saucy Pierogi explains that not only did they pay to be there (for food trucks like Bake Three Fifty it was $2,500, plus a $500 refundable deposit), the cashless payment service also took a cut of their sales - for Saucy Pierogi, it was 20 per cent.

On the customer end, it was relatively easy to make turn your bracelet into a mobile bank account. I added money to mine using my phone and set it to auto re-load so I wouldn't have to wait in the long, long top up station lines on site. 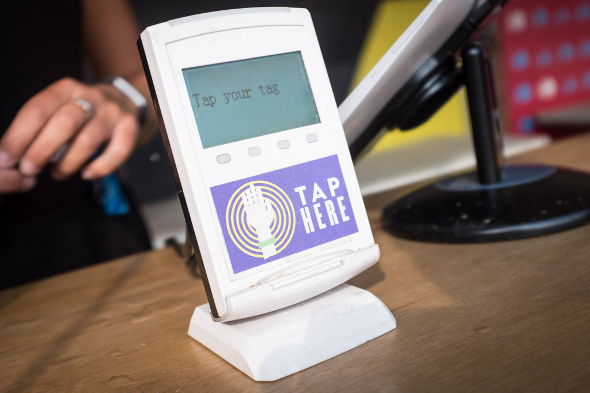 Now, I have about $50 left. I'll have it back on my card within 10 days, but the payment service Intellipay by Intellitix will take a $5 processing fee. For those who added money using debit or cash, they'll need to fill out a form, which asks for direct deposit information, to get their money back.

WayHome's not the only festival going cashless. Digital Dreams integrated this RFID technology into its event. As will the upcoming Veld, although this EDM event at Downsview Park will still let guests use cash and cards to make purchases if they don't want to add money to their wristbands.

Ultimately, this all makes the festival experience more seamless, for both attendees and vendors. It also lets organizers get total visibility on how much and where money is being spent.

But how you feel about that is a different story.