Skinny Puppy bring all the bats to the pier in Toronto

On Friday night one billion goths descended onto Toronto's lower east side venue Sound Academy to see industrial legends Skinny Puppy. Here, highlights from my night would be the overwhelming smell of hot dog, blinding house lights, a comical but slightly creepy washroom attendant, and getting molested by some weirdo. Hot dogs! 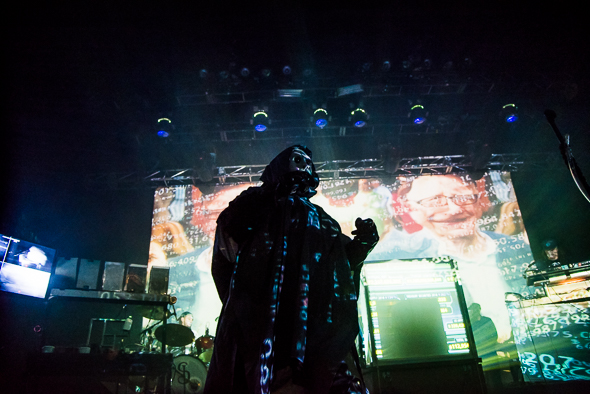 The Docks (does anyone else still call it that?) had installed a hot dog vendor inside the club right next to the crowd, so the entire cavernous room smelt like steamy dogs. Why would they do that? It was revolting (Morrissey would have cried).

Then, why would a venue turn on the house lights in between any bands - but in between industrial bands? Now we had a room full of awkward people dressed in black, trying not to make eye contact. My friend put his sun glasses on. Meanwhile the washroom attendant was yelling things like "You touch your dink, wash your hands in the sink", which was actually pretty funny, though awkward. Lastly, some creep grabbed my butt. Not cool... 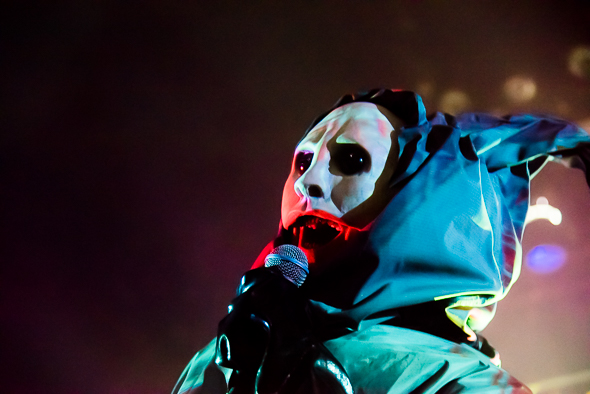 Enough gothly complaining - Skinny Puppy still nailed it, 4.5 bats out of 5 to the wall. The Canadian god fathers of industrial are a machine that just won't quit. With Cevin trapped behind his synths and the drummer tucked neatly into the corner, it's left entirely up to Ohgr to command the attention of the audience and he never fails to impress. 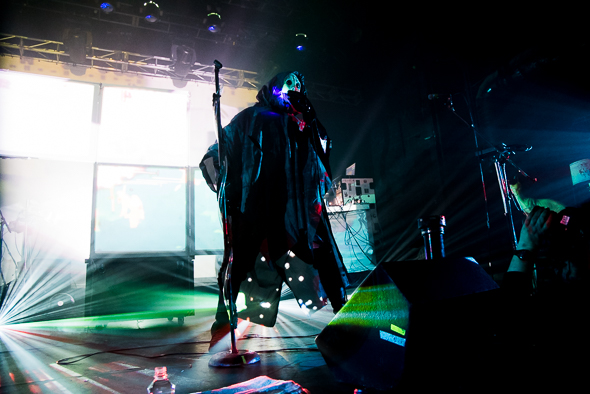 Even under a mask and cloak, you can feel Ohgr's energy seething off the stage and into the crowd. Of course no Skinny Puppy show would be complete without several costume changes, weird props, and other tricks.

Three bands opened the show: LA's Youth Code were great. I'd heard a lot about them: more raw and minimal, they revisit the roots of early industrial but with the fresh perspective of hardcore influences. They manage to cut through some of the things about modern industrial that I don't like, and focus instead on simple sounds, energy, and emotion. Huajobb put on an enjoyable set as well.

But I'll get a lot of flack for this, Vancouver's Front Line Assembly were horrible. I have a lot of respect for Bill Leeb and these Canadian industrial pioneers, but I definitely was not feeling them on Friday.

Their faux hawked keyboard player was doubling as "hype man," and failing - his high pitched squeaking "yahhhhhs" were driving me nuts, while the band's visuals seemed like a slideshow a time traveling 90s goth teenager would put together out of cool jpegs he found on the internet. Whoa a circuit board photo, that's so "1337"!

Maybe I expected too much, but everyone I spoke to, from old fans talking about how great FLA were back in the day to newer fans who were excited to see them for the first time, was disappointed. Too add insult to injury, Leeb forgot Youth Code's name when thanking the bands, which he smugly laughed off.

Yet despite the above, and the blinding lights, the creepers, and the never ending smell of processed meat, every bat in attendance seemed to fly back into the night with a smile on their face. 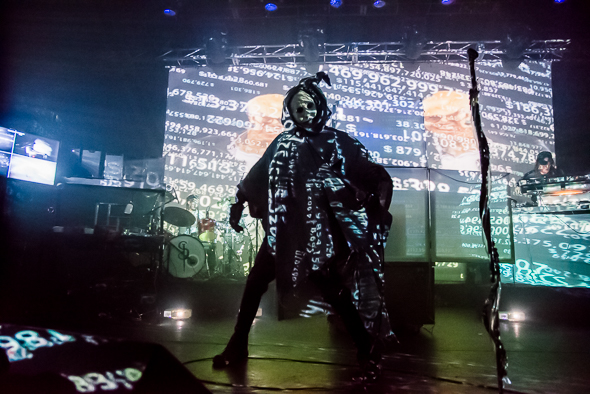