On Friday night, local heroes Fucked Up joined Bonjay, Catl, Silver Dapple and Hut at the Steamwhistle Brewery to celebrate the 12th anniversary of the Wavelength Festival. This was the second in a series of four shows, with each one featuring a stacked bill of some of the best bands currently in Toronto.

Friday's Wavelength Concert began with Hut, an unfortunately-named experiment involving members of Toronto's Hooded Fang and Spiral Beach. On their recordings, Hut sounded like nothing so much as really infectious 1960's rock n' roll played from deep inside a cave, but live that wash of reverb was abandoned and the music underneath was revealed. Side project or not, it was a shame the room wasn't full when Hut went on — their set of raucous, energetic tunes was too excellent to ignore.

Following Hut were Silver Dapple, whose latest single, "English Girlfriend," was also their opening number. Difficulties with the monitors and missed cues plagued the early part of their set, but by the end they had loosened up and found their sound, a fuzzed-out pop callback somewhere between Sonic Youth and My Bloody Valentine.

"Get a little closer, dance a little dirty, and give it up for Catl!" one of the organizers said as they took the stage. And the audience obliged, with couples dirty dancing at the corners of the crowd while the band shot through their set of torn-speaker blues. With tracks sounding tight, taut, lean & mean like "Gold Tooth Shine" — music made for driving fast in the middle of the night — Catl were the first huge hit of the show. Their self-described 'swamp boogie' blues-punk was certainly arresting, with bandmates Sarah Kirkpatrick and Andrew Moszynski loose and cool alongside lead singer catl howling his lyrics into the microphone in a whisky-soaked drawl.

Avant-garde dance group Bonjay began with their track "Stumble" and honestly, lead singer Alanna Stuart performed with such charisma I totally forgot this band was the one real departure from the guitar-rock format on the bill.

Stuart announced they're getting ready to record a full-length LP this spring. This is a good thing: with just two EP-length releases to build a set on, I was curious how they'd fill out their time at Wavelength. But besides an excellent cover of a Caribou song, Bonjay kept things moving by playing some new material for the crowd. 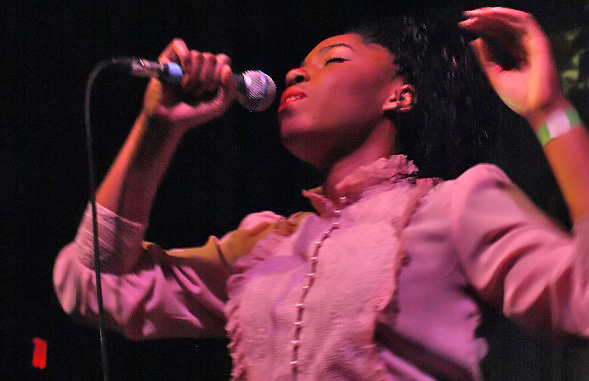 Their first new track, "Medicine For Melancholy," began with a disappointing false start, Stuart halting the song after the first verse. On the second try, though, the new songs flowed and came through as layered and powerful as their earlier work; "Angelou" in particular features some great vocal samples.

The high point of their set was the closer, "Gimmee Gimmee," which ended with Stuart falling to her knees, screaming and chanting as the song collapsed around her.

Throughout most of the show, the crowd was fairly sedate, but I turned around while the crew was firing up Fucked Up's backline and found myself face to face with a group of grinning young men who seemed very intent on throwing each other around. Where were they during Bonjay? I wondered.

Well, whether they showed up late or were magically transported to the venue by the sheer mosh-pit force of Fucked Up's live show, the crowd began to move en masse when the headliners began to play. Alternating between newer tracks like "Queen Of Hearts" off the Juno-nominated David Comes to Life, and more well-known ones, like "Son The Father" from their Polaris Prize-winning The Chemistry Of Common Life, Fucked Up — to put it mildly — tore the venue apart. 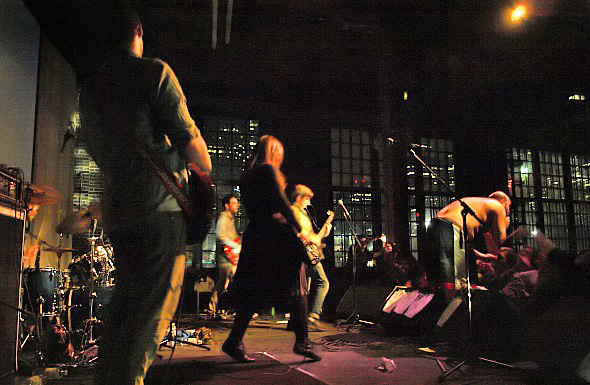 I mean, what else can be said about them? I'm sure you're already familiar with Fucked Up's legendary live show, but lead singer Damian Abraham remains one of the best reasons to go see live music in Toronto. Picture this: At one point during the set, he was lost in the crowd, spinning in mad circles with a microphone cord wrapped around his face and a delighted fan wrapped around his shoulders. After this, he got back on stage with the cord still around his head--and kept singing. As a neophyte to the experience that is Fucked Up--this was only my second time ever seeing them--my jaw was on the floor. I mean, who does that?

Critically acclaimed, beloved by their fans, they're a group defined not just by their success, but by the unadulterated joy you could see on the face of Abraham as he heard the audience singing his own lines back to him. On tracks like "The Other Shoe," he'd hold the microphone out over the mess of people jumping around in front of the stage. And every time, someone would grab it, bark a lyric into it, and — amazingly — let go so he could move on to the next person. 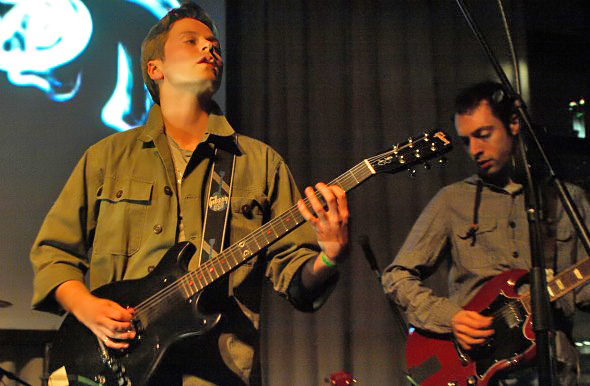 Wavelength made their reputation on finding the best music before anyone else could. For more than a decade, they've kept new artists at the forefront of the scene in Toronto, and many of those they've showcased have gone on to huge success.The strength of the bill Friday night proves just how right they can be; don't miss the next installments of these shows.