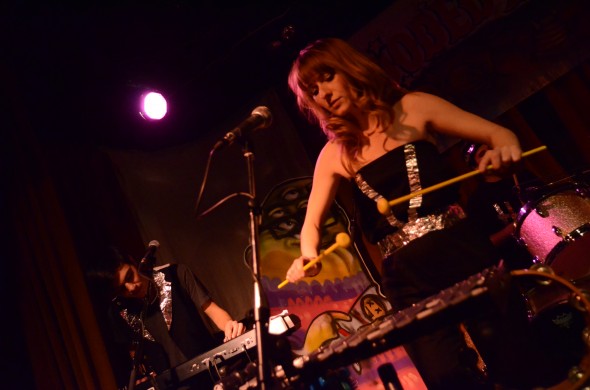 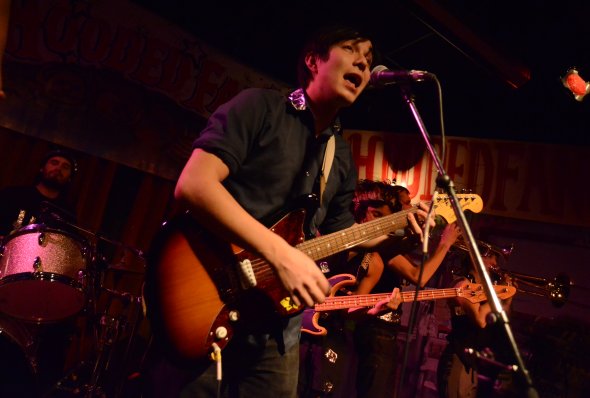 The city's hip and in-the-know music crowd (well, the ones that weren't at Broken Social's gig at Sound Academy) were at the Drake Underground Thursday night. They had presumably seen Kevin Drew and co. myriad times on their home stomping grounds, and were in the mood for the up-and-coming Toronto kids who were launching their new album, Album (how very meta, I know). 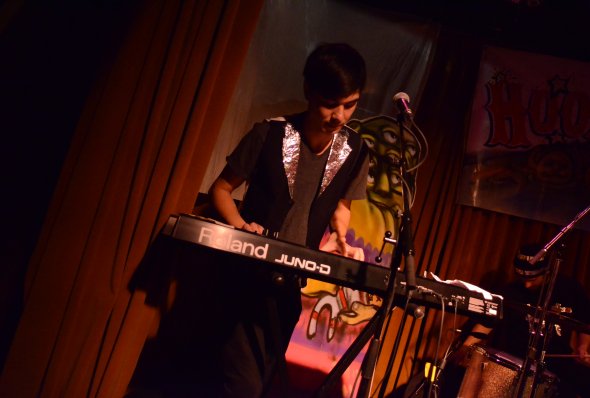 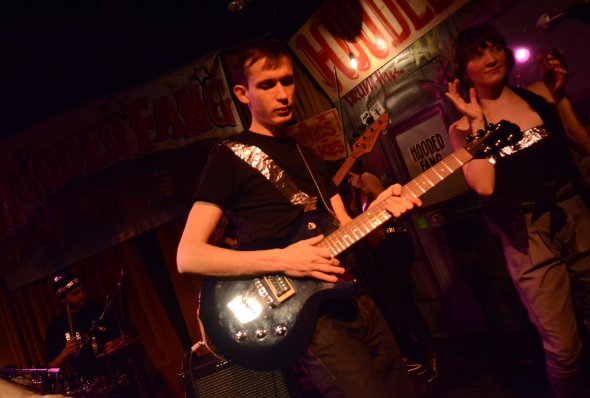 The Drake Underground was an apt location for Fang's album release - the band is still indie in the truest sense. Independent. Unsigned, they do their own promotion and social networking. For the CD release, they partly got the word out on the now-old-fashioned way with a good ol' Facebook event. I was put on guest list by the band's excitable bassist, April Aliermo. Their website is a Wordpress blog. Their music video for the irresistibly catchy "Highway Steam" was done by a friend, Craig Orrett, who also manned the projector at the show.

But back to the concert. 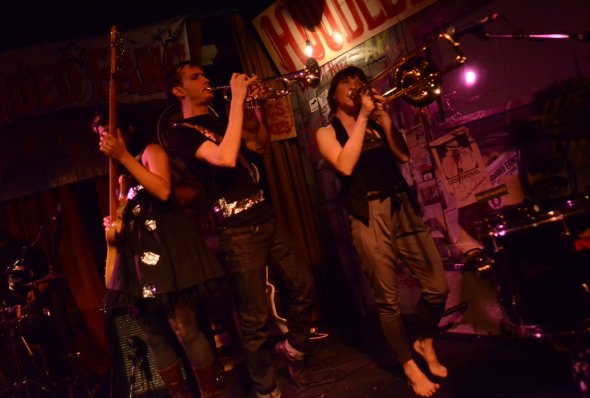 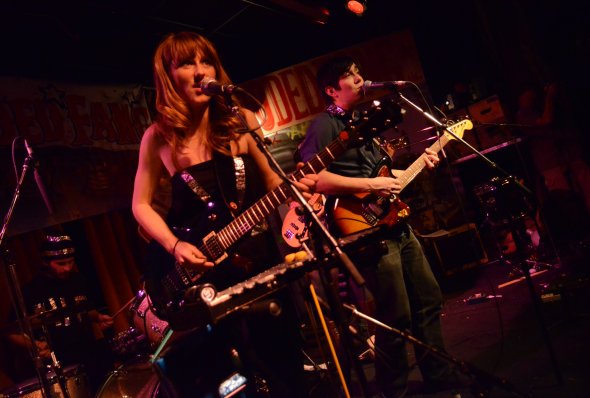 You can tell they have influences - The Strokes, The National, a tad of the Stars - but they are very much their own band. With boy/girl singers, trombone, trumpet, glockenspiel and even strings, Hooded Fang pulls it all together with members often changing instruments between songs. The sounds are sunny and pop-infused but carry and cling to somber, downtrodden lyrics. Take, for instance, Daniel Lee's droning "Days pass like a slow bird / I'm passing right under" that are strung together in a dance pop parade on "Green River." It was on this song, it is of note, that three white-clad space girls "danced" their way from the back of the room onto the stage for a choreographed dance number. It was all a part of the night's aesthetic, along with the stage design graffiti by Toronto's Elicser. The album's cover art, staying on the Toronto art theme, was by Dougie Kerr, one of the dude's behind Honest Ed's signs. 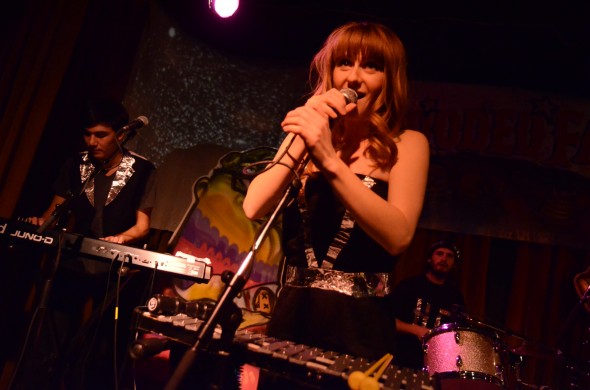 Speaking of that aesthetic, the night's second opener was an unusual delight. Santa Guerilla, a percussion group that sings in half-English, half-Filipino, caught the audience off guard with their brief, yet intense 25-minute set. With rapping, chanting, distorted drum beats and building melodies, the eight-piece was strange, but satisfying nonetheless. 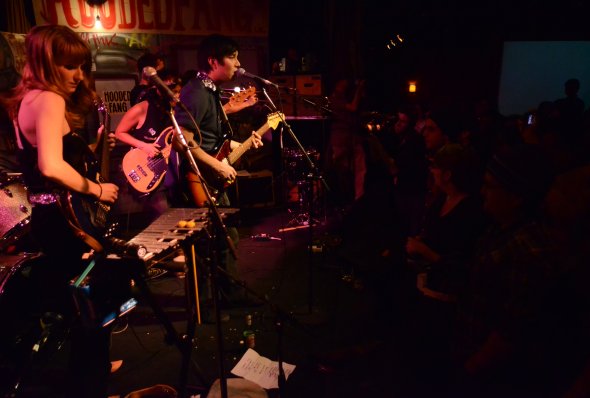 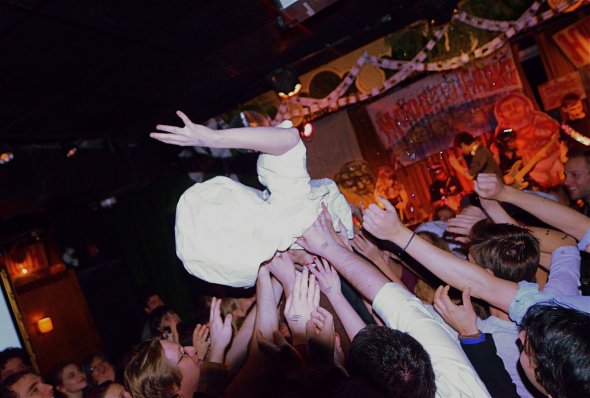 Exhausting their full catalogue of ditties - which in its nascent stages includes only an EP and Album - Hooded Fang seemed to have found their own stride. Taking two years between that EP and the new album, the time was well-spent on honing, but not overdoing their building orchestrations. At the show, they exemplified this jumping from song to song with little reservation, but maybe a tinge of nervousness. Then again, it was their big night. But by the end of the show, they found their groove and the variety of dance-worthy songs -- "Land of Giants," "Laughing" and "Highway Steam" -- were soaked up with shimmying feet in the crowd. 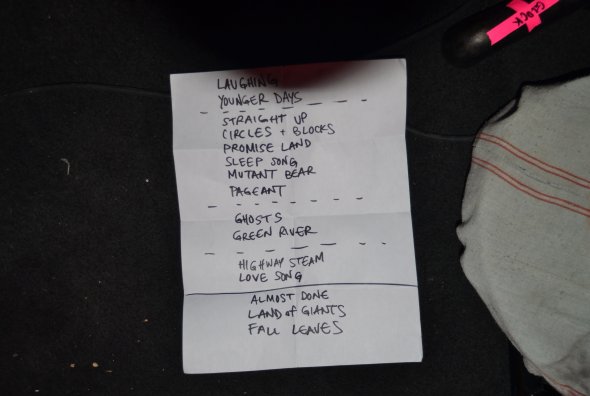 On an unrelated note, yes, their name comes from those children's books by the late great Mordecai Richler.