While the slogan in the above billboard from this weekend's Virgin Music Festival sounds cool, hearing damage is no fun.

The loudness of a rock concert can easily exceed 100 decibels. Prolonged exposure to sounds this loud can result in hearing damage, permanent hearing loss and other unpleasant things like tinnitus.

It seems irresponsible for a consumer-conscious music event promoter like Virgin to, willy-nilly, promote hearing damage or sit idly while 40,000 concertgoers play russian roulette with their hearing.

One of the booths that caught my interest at VFest was the Soundcage by Sonomax booth. They were there to spread the message of hearing protection and sell custom-fitted earplugs and earphones for bands and fans.

"We want people to start thinking about hearing, the most undervalued sensory perception," says Nick Laperle, chief evangelist for Sonomax. "It's part of the experience not to have your ears buzz afterwards." 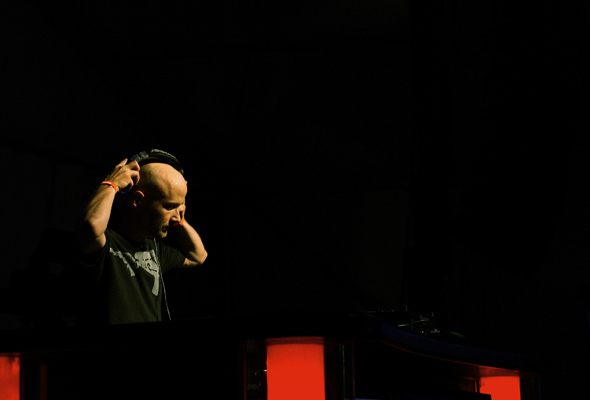 Even Moby (pictured above) wears protection during his DJ set. He's wearing earplugs under his over-the-ear headphones.

I've been going to loud clubs and concerts for over 15 years. I used to attend without wearing any earplugs. The cheap ear plugs I tried always muffled the sound to the point of ruining my enjoyment of the show, so I stopped wearing them. Then I smartened up and started wearing earplugs for at least part of the concert.

Earlier this year I splurged and bought some $16 Earlove earplugs, which were a bit of a step up. They claim to "reduce overall sound level while preserving sound quality." While that's a big improvement, they tended to feel a bit uncomfortable after a while. 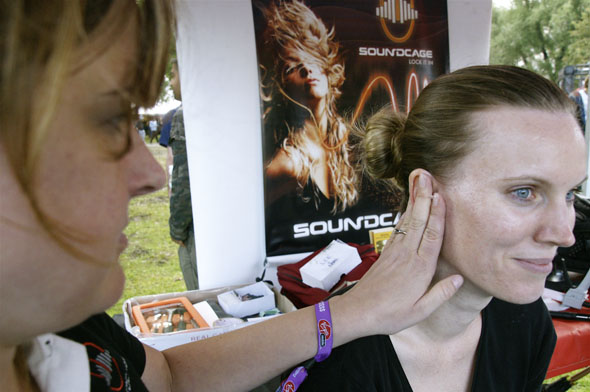 Sonomax is a Montreal-based company that's been around for about 10 years. They've been largely catering to the industrial market, but now they've got two products for consumers: custom-fitted earplugs (for $150) and custom-fitted earphones (for $250). Backstage, they've fitted hundreds of musicians, including all the members of The Foo Fighters (except Dave Grohl). But only a dozen or so concertgoers bought their product.

I decided to try the custom earplugs. It took about 15 minutes to get fitted, a pretty simple, noninvasive process. They insert a soft, orange silicone-like mold into each ear and make sure it fits well.

The earplugs are pretty comfortable and after a while I forget I've got them in. They're pretty inconspicuous, too. So you don't look like a dork like you might with those bright yellow or pink foam earplugs. I tried them out at the Bacardi B-Live Tent during Moby's set and the music still sounded decent. Only a tad quieter. 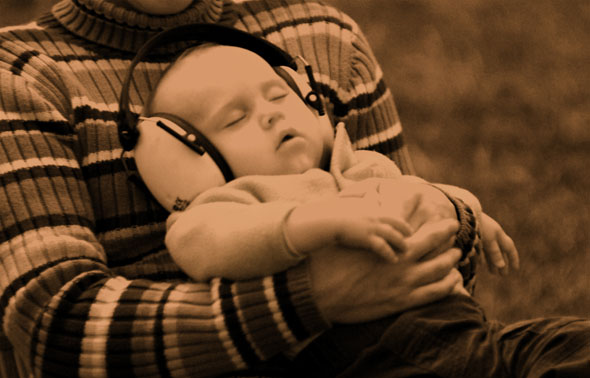 Later in the evening I met Jesse Evans, a nine-and-a-half-month-old baby wearing ear protection (above). The mother, Melisa Evans said this was their first concert together.

"Acoustic trauma can happen with just one concert," warns Laperle. "So why take a risk?"

Even if you only do it just once, you wouldn't dream of having sex with a hooker without protection, right? So why take the risk with your hearing?

We protect our eyes with sunglasses and our skin with suntan lotion, it only makes sense that we protect our hearing. I don't feel pretty bad a few years down the road if I lost my hearing due to inadequate protection at a concert.

Noise-induced hearing loss is the most common, irreversible occupational hazard world-wide, according to the World Health Organization. And it's completely preventable.

"For factory workers, if they're exposed to 85 db for eight hours at a time, they require hearing protection," says Laperle. "But there's no such law for consumers."

If you're concerned with hearing damage or hearing loss, you may find Earlove's what is safe sound chart a useful guideline.

If you go to clubs or concerts, do you find the music too loud some/most/all of the time? What do you do to protect your hearing?