The Odeon Danforth is another of the movie theatres on the Danforth that I remember well, but never attended. However, I viewed it many times from the windows of the old Bloor PCC streetcars, which passed in front of the theatre.

The Bloor cars were removed from service after the Bloor-Danforth Subway opened in 1966. The Odeon Danforth's main rival was the Palace Theatre, located a short distance to the east of it. Both theatres are now long gone.

The Odeon chain of theatres entered the Toronto market to screen British films, but later showed Hollywood films as well.

In the 1950s and 1960s, Odeon developed the policy of featuring the same films simultaneously in several of its theatres. As I lived nearer to the Odeon Humber, there was no need for me to journey to the east end of the city to view the films playing at the Odeon Danforth.

On a hot day in July 2014, I travelled on the subway to visit the site where the theatre had once stood, at 635 Danforth Avenue. Today, a branch of GoodLife Fitness is on the location. The site is on the south side of Danforth Avenue, a short distance west of Pape Avenue.

The Odeon Danforth opened on April 16, 1947. Later the same year the Odeon chain opened the Odeon Toronto (Carlton) on September 9th, and the Odeon Hyland on November 22, 1948.

The previous year, the company had opened the Odeon Fairlawn on Yonge Street. The following year they opened the Odeon Humber on January 7th. The Odeon Danforth was the only theatre they owned located east of the Don Valley. 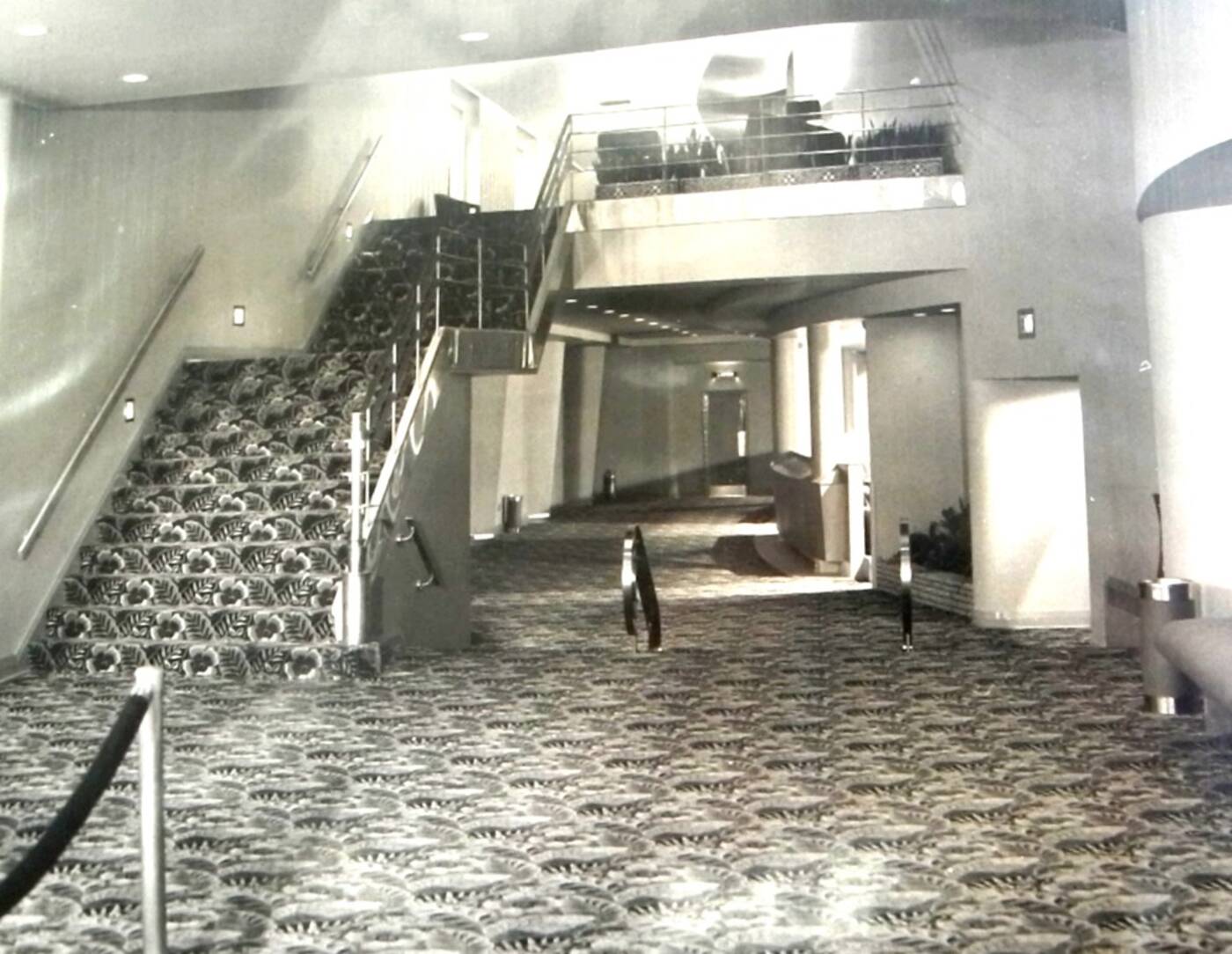 Lobby of the theatre, with the rich carpeting and the grand staircase to the balcony. Ontario Archives, AO 2141.

The theatre was impressive, its massive marquee dominating the street. The modern glass doors were recessed a distance back from the street, creating an open space that formed a grand approach for patrons entering the theatre.

This compensated for the theatre's small frontage on The Danforth. The box office was outside, to the right of the doors. Since the theatre extended back a good distance from the street, there was space for an extensive lobby, which was richly carpeted, with a wide staircase leading to the balcony.

Its auditorium was large, possessing over 1300 seats, including the ground-floor and the balcony. The seating on the main floor contained two aisles—a centre section and further seating on either side of the aisles. 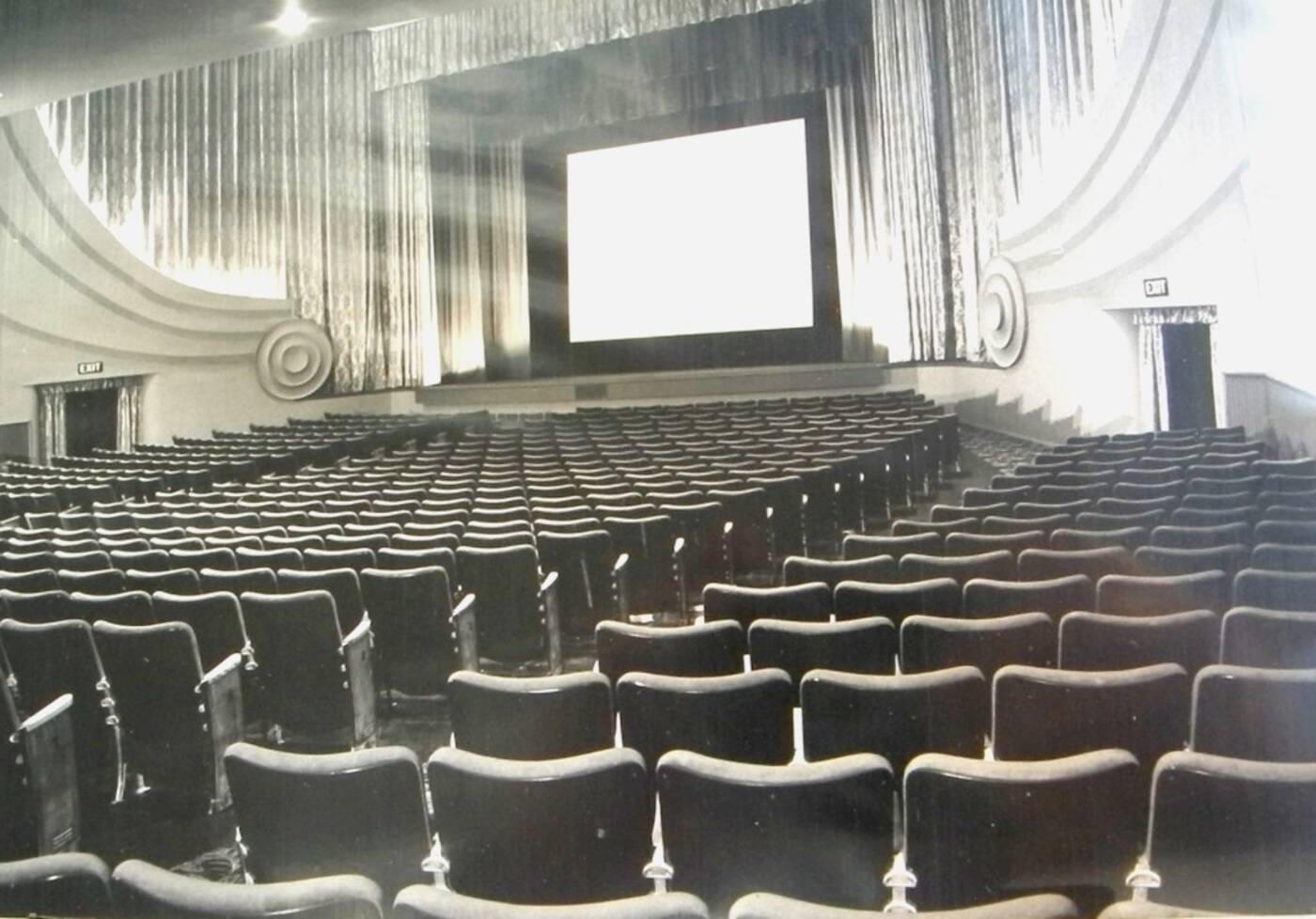 Ground-floor seating of the Odeon Danforth, with its sweeping decorative lines on the side walls and generous drapery near the screen. Photo Ontario Archives, AO 2142.

Surrounding the screen were rich folds of drapery, which created elegance, but also intimacy. The walls were decorated with sweeping decorative lines that accented its modernistic style.

When the demographics of the area changed, the theatre commenced showing Greek films and its name was changed to the Rex. Eventually the theatre was no longer profitable and it closed.

Finally, the building was renovated for an Extreme Fitness fitness gym, but some of the interior architectural features of the theatre were maintained.

Passing by the site of the Odeon Danforth today, it's difficult to conceive that there was once a grand theatre on the premises.

Doug Taylor was a teacher, historian, author and artist who wrote extensively about Toronto history on tayloronhistory.com. This article first appeared on his site on March 11, 2015 and has been republished here with the permission of his estate. The article has been modified slightly.