A lot of goodwill towards the man and the myth gets squandered here (along with an amazing cast) for a ghoulish cartoon costume party hosted by an Alfred Hitchcock fat suit. Not content with being a drama or a comedy, this strays into serious WTF territory with cotton mouthed Anthony Hopkins-as-Hitchcock having laborious life discussions with the ghost of real life cannibal killer Ed Gein (whose grisly handiwork inspired Psycho and later The Texas Chainsaw Massacre). Stick with The Girl, the vastly superior other Hitch biopic from last year, or better yet just rent the original and always enthralling Psycho.

In a week that sees the master director's good name sullied on home video as dress-up fodder for the director of Anvil: The Story of Anvil (see Hitchcock), it's refreshing that MGM have re-packaged a trio of Hitchcock's smartest mid-period thrillers on Bluray to sho nuff: Rebecca (1941), Notorious (1946), and Spellbound (1945). Spellbound is the most compelling of the three, featuring a tight script by Ben Hecht, a cuckoo performance from Ingrid Bergman and dream sequences designed by Salvador Dali.

60 years deep into the innovation of 3-D movie making and finally we're starting to see quality results from the format, thanks to the visual prowess of cinematographer Claudio Miranda (TRON: Legacy, The Curious Case of Benjamin Button) and metaphorical storytelling sense of Ang Lee. Cudos also to the rendering of CG Bengal Richard Parker, surely the best castaway sidekick since Wilson. Also available in a deluxe 3-D Bluray Collector's Edition.

Fraggle Rock: Season 1 (Henson)
Visionary Jim Henson's collaboration with the CBC has been trapped with the Doozers in copyright hell for seemingly forever. Short of bringing it back this is about the best fans can hope for, and a timely reminder of TV shows that adults could once happily watch with their kids without feeling hopelessly out of touch.

The Blob (Criterion Collection)
Steve McQueen's breakthrough picture is like the bastard stepchild of Godzilla and The Thing from Another World. Seen through the eyes of aged, overweight MST3K fans this might be jello-fied schlock but buried beneath the pulp exterior is an acid Polaroid of the USA having a Cold war induced nervous breakdown (kicking off with a bouncy theme tune from a then unknown Burt Bacharach). Always a boon to see art-house champions like Criterion lavish tender loving care on late night B-movie Sci-Fi/horror stuff like this.

Before George Lucas began to cannibalize and defile his own empire with the dreaded "fiddled with" special editions of the original Star Wars trilogy, followed by the full blown fecal sandwich of the Star Wars prequels, Willow was perhaps the first warning sign that things at Skywalker Ranch were slightly askew. Nonetheless people of a certain age who fondly remember wee Warwick Davis and his fantastical adventures will want to check out this Bluray with a commentary from director Ron Howard and some unseen footage.

Doctor Who - The Aztecs: Special Edition (BBC)
Rerelease of an almost 50 year-old Doctor Who story, sadly still Matt Smith-less and slow enough to make the Quaternary glacial period seem positively ADD. No problem though because it's the bonus feature that is the star attraction here - a "lost" episode of the long running BBC series entitled "Airlock", recently found hiding behind someone's cupboard and returned just in time for the Time lord's 50th b-day party. For Doctor Who fans, this is the stuff that dreams are made of.

Who Framed Roger Rabbit? - 25th Anniversary Edition (Touchstone)
Upon release the computer generated effects in Roger Rabbit seemed like the most revolutionary leap in movie making ever, but that was 25 years ago. Now it's mostly remembered for Kathleen Turner's husky 3-packs-of-unfiltered-Camels-a-day voice work as Jessica Rabbit, who mainstreamed the sexualisation of cartoon characters and made Google image searching for our favourite animated friends akin to walking in a minefield. Bonus features include deleted scenes and documentaries on the troubled production.

This Must Be the Place (eOne Films) 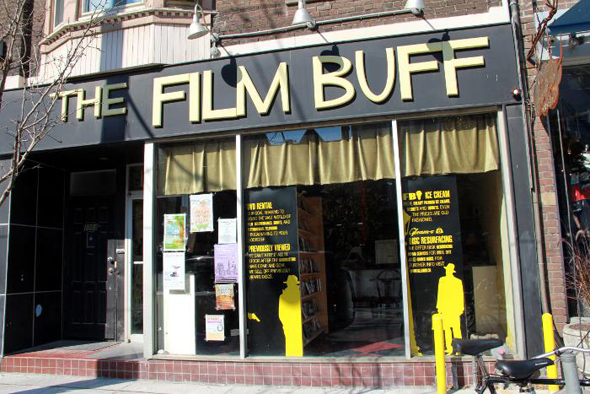 The Film Buff serves up great movies and even greater ice cream at two locations in Toronto, Ontario. Nick & Amanda Worsley of The Film Buff are also crazy about good TV, and here's a taster of what shows they think are worth your non-film time:

A terrifically-witty BBC production about a rough and tumble group of young offenders who acquire super powers during a mysterious storm. It's Scooby-doo for grown-ups. (Series 1 and 2 are available on DVD, Series 3 is a PAL format U.K. release at this time)

A stellar second season pushes Boardwalk Empire over the hump and establishes it as one of the premier television shows currently broadcasting. (DVD and Blu-ray)

Standup comedian Louie CK has created the best half hour of comedy on television with two seasons of his semi-autobiographical Louis. Not to be missed. (DVD and Blu-ray)

A 10 episode Scandinavian production about the police investigation that follows the grisly discovery of a dead body on a bridge connecting Denmark and Sweden. (PAL format UK release with subtitles)

On the short list for the best television series on the planet right now, this fantastically compelling and intricate Danish political thriller delves into issues of gender, media, political change and power. (Both series are currently available in PAL format UK release with subtitles. Series 1 releases in North America in mid-March).

MTV's teen comedy series is what would happened if Mean Girls and Easy A were re-imagined as a television series. It's underlying tone of youthful optimism and old-fashioned storytelling style lifts it well above the fray. (DVD only)

One of the most intriguing offerings from the BBC last year, The Fades is a deliciously-creepy romp into The Night of the Living Dead by way of Freaks and Geeks. (DVD and Blu-ray)

On the surface, it might appear the natural sequel to the cringe-inducing Sex and the City, but Girls is in many ways its exact opposite. An edgy, immediate and articulate effort from creator, star and current It girl, Lena Dunham. (DVD and Blu-ray)

A lifetime of police work has left Detective Kurt Wallander with the look of a man who's seen too much. In a spare and compelling performance, Krister Henriksson does justice to the complicated detective beloved by fans of Henning Mankell's best-selling crime novels. (Series 1 and 2 are available on DVD, Series 3 and 4 are PAL format UK releases with subtitles at this time.)

For more information and reviews check out The Film Buff.