The Toronto Raptors are coming full circle as a brand and cultural force, it seems, by finally partnering (in some way) with the film franchise from which it cribbed its own name some 26 years ago.

Allow me to introduce the Jurassic Park x Raptors capsule collection by OVO — or rather, allow OVO to introduce it this Friday, consistent with all of the brand's new product drops.

The popular streetwear company, founded by Drake, unveiled a first glimpse of the historic collaboration via Instagram this afternoon.

"OVO has partnered with the Toronto Raptors / Jurassic Park franchises on a capsule collection," reads the caption of that post. "The collection includes a limited edition, hand crafted leather varsity jacket created by Jeff Hamilton."

The Raptors similarly revealed on Wednesday that an "OVO / Jurassic Park Raptors Capsule Collection" would be dropping on November 19.

It's not yet clear how extensive this collection will be, or even what it will consist of, aside from the aforementioned leather varsity jacket by iconic designer and NBA sweetheart Jeff Hamilton.

From what we can see in photos, the jacket features a Toronto skyline in red, purple and black, as well as the unmistakeable Jurassic Park T-Rex silhouette and the words "JURASSIC PARK" scrawled across the back.

The presence of the CN Tower and a "416" on the collar make the piece unmistakably Toronto-themed, as does a Raptors logo on one arm and a prominent OVO owl on the front being squeezed by red raptor claws. One of the jacket's arms features Hamilton's own signature patch as well as a Jurassic Park logo. 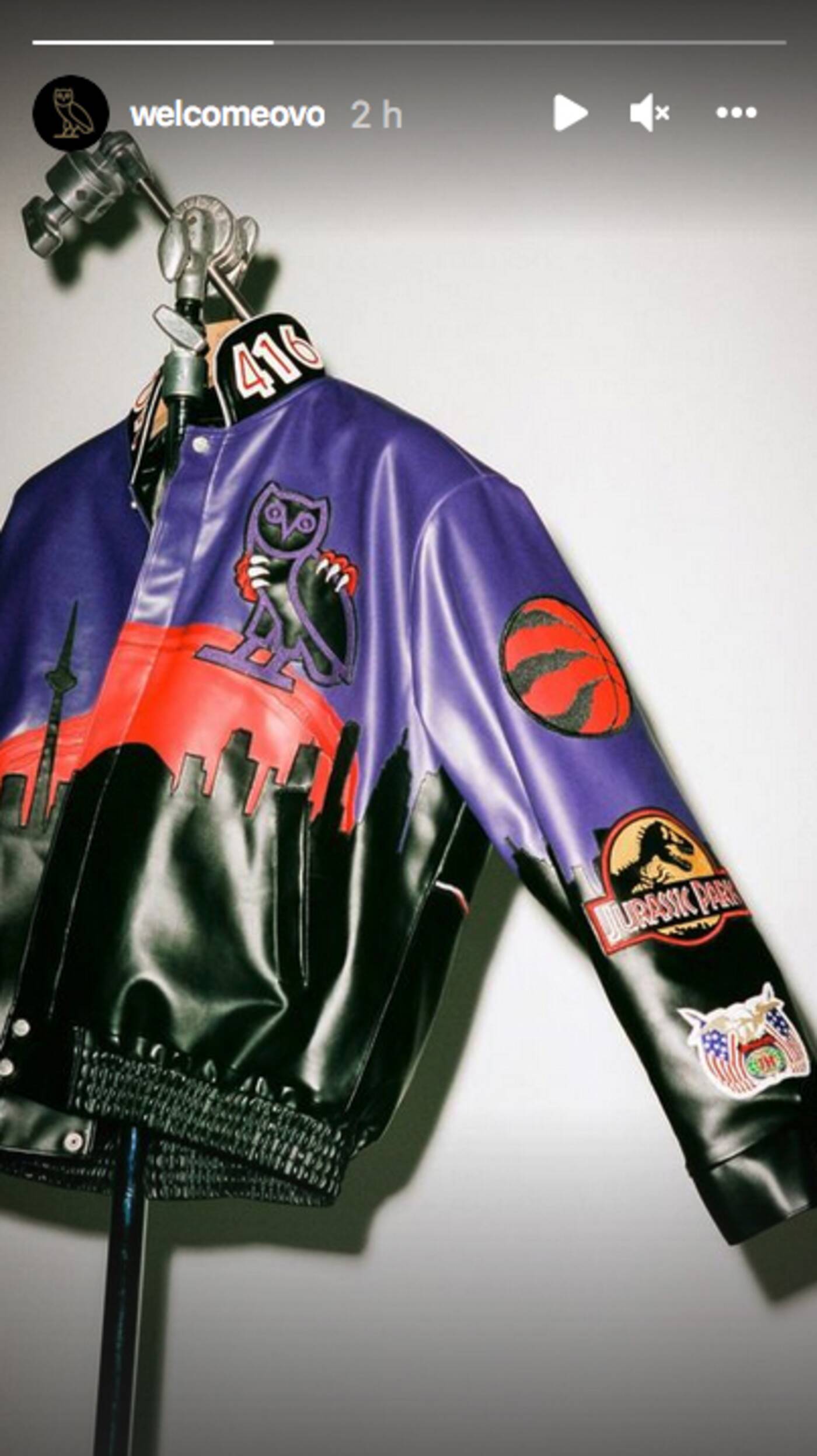 OVO posted an image of the jacket to its Instagram Stories on Wednesday, but has yet to say how many will be made or how much they'll cost. Image via @welcomeovo.

Fans of all four brands — OVO, The Toronto Raptors, Jeff Hamilton and Jurassic Park — are all going nuts over the colourful coat, speculating online as to how much it might cost.

"My guy's going to be asking for like $700 omg lol," wrote one commenter on the OVO Instagram post. "The only person that can afford that sh*t is Drake himself," joked another.

I mean, the jackets on Hamilton's website start around $750 and go all the way up to $5,000 a pop for "special edition" pieces, which suggests that the Raptors x Jurassic Park version won't be coming cheap.

I'd wager that it hits the market for at least $5,000 and sells out instantly, along with pretty much everything else that is in this surprise capsule collection.

"At this point just take my credit card information and send me whatever it is," wrote one fan on the Raptors' mysterious Instagram post, reflecting what many commenters are saying about the not-yet-dropped collection (aside from how "hard" it is).

For some fans, especially those who were around for the inception of Canada's only NBA team back in 1995, money is no object: The pairing of the Toronto Raptors and Jurassic Park is simply too huge to miss.

It's widely known by this point that the Raptors were literally named after the velociraptors in the classic 1993 Steven Spielberg flick.

The budding NBA franchise came to their name by asking members of the public for input, giving them 10 options to choose from: Beavers, Bobcats, Dragons, Grizzlies, Hogs, Scorpions, T-Rex, Tarantulas, Terriers or Raptors.

Jurassic Park-mania was at its height in North America at the time and "Raptors" won the vote, securing a future filled with dinosaur-themed merchandise for Toronto sports fans.

So closely linked are the two brands — the popular film franchise and the basketball team — that the space outside Scotiabank Arena where fans gather to watch the Raps on a big screen has long been dubbed "Jurassic Park."

Toronto's hysterical group-viewing phenomenon made international headlines when the Raptors were in contention for the 2019 NBA Playoffs, sparking tinier versions of "Jurassic Park" all over North America.

In just a few days, we'll finally be able to cop official licensed merchandise paying homage to that place, as well as the Raptors' sci-fi movie roots — and much like our 2019 championship win, Drake played a part in bringing it all together.