Halloween costume ideas for 2021 range from references to pop culture to quirky references about Toronto. You can either stick with the boring old ideas or play around with specific 2021 looks. For the best new costumes, check out some popular Netflix shows, pop culture moments, and specific Toronto stories.

Here are some Halloween costume ideas for 2021.

Drake's highly anticipated new album dropped earlier this year and has been on everyone's playlist since. Gather a group of your friends and dress up as the emoji filled album cover. Bonus marks if you have friends who are actually pregnant. 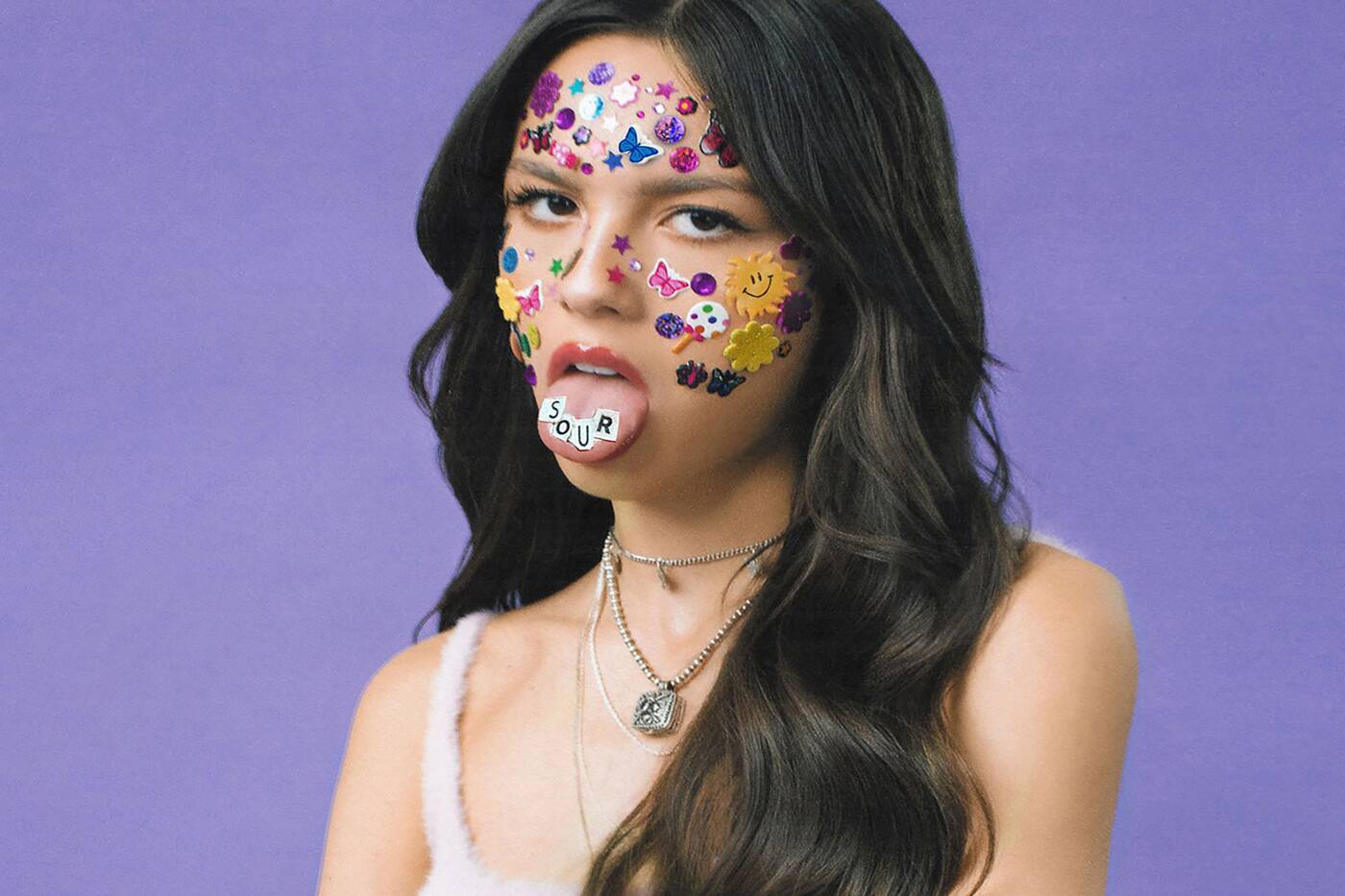 This Disney star turned pop star has captured the broken hearts of girls all around the world. Her album cover is the perfect last-minute Halloween costume. Photo via Olivia Rodrigo.

This teen pop star has taken the world by storm with her debut album SOUR. Grab a pink tank top and a ton of stickers and plaster them all over your face including your tongue but make sure you don't swallow any.

The only way to get around on all public modes of transportation in the city is with a Presto card so why not get dressed up as one and try your luck at getting on the TTC for free. All you'll need is some paint, cardboard, and a creative hand to paint all the details of the card.

This new and unexpected duo has become this year's "it" couple. Why not dress up like this couple at MTV's VMA red carpet. Hit up a lingerie store or if you're crafty, make Megan's iconic dress. Grab a sparkly red suit for your partner and if you want to take it to the next level grab a long dark wig and a bleached blonde wig to really complete the look.

The release of Squid Game on Netflix has taken the world by storm. You can either dress up as one of the players by sporting a green tracksuit with a number painted on or you can be on the guards and wear an all-red jumpsuit and a mask with one of the shapes painted on. This costume will definitely be one of the more popular ones this year. 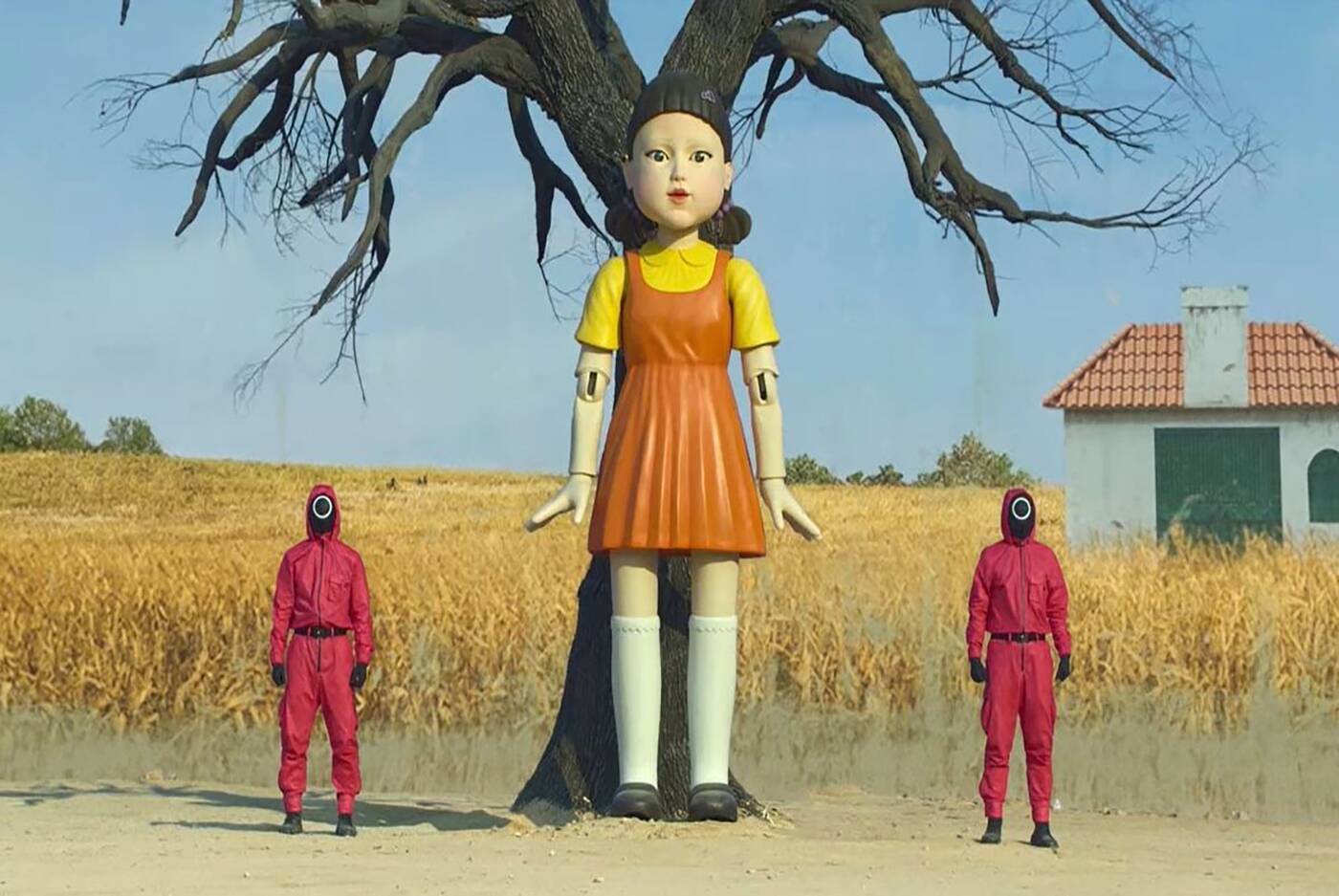 If you don't want to dress up like one of the players from the hit Netflix show, then the robot doll is a good alternative. Photo via Netflix.

The robot doll from Squid Game

Speaking of Squid Game, another iconic character is the robot doll. This costume idea will be easy to execute. All you'll need is an orange dress, a yellow shirt, and to put your hair in some pigtails and you'll look exactly like the eerie character.

Ghost kitchens have been popping up around the city lately so why not dress up as one of the many phantom kitchens. Grab a white sheet and a few kitchen utensils and you've created this simple yet timely costume.

Harry Styles at the Grammy's

If you're as big of a fan of the British singer as I am then this costume is for you. All you need is a two-piece leather suit and a green feather boa and you're all set. This outfit can also double as a fit for a night out so make sure to save it for the next time you head to the club.

Kim Kardashian at the Met Gala

Speaking of celebrities at high-profile events, why not dress up as this reality tv star at the famed Met Gala. All you'll need is a black morphe suit with a matching cape and you're good to go. 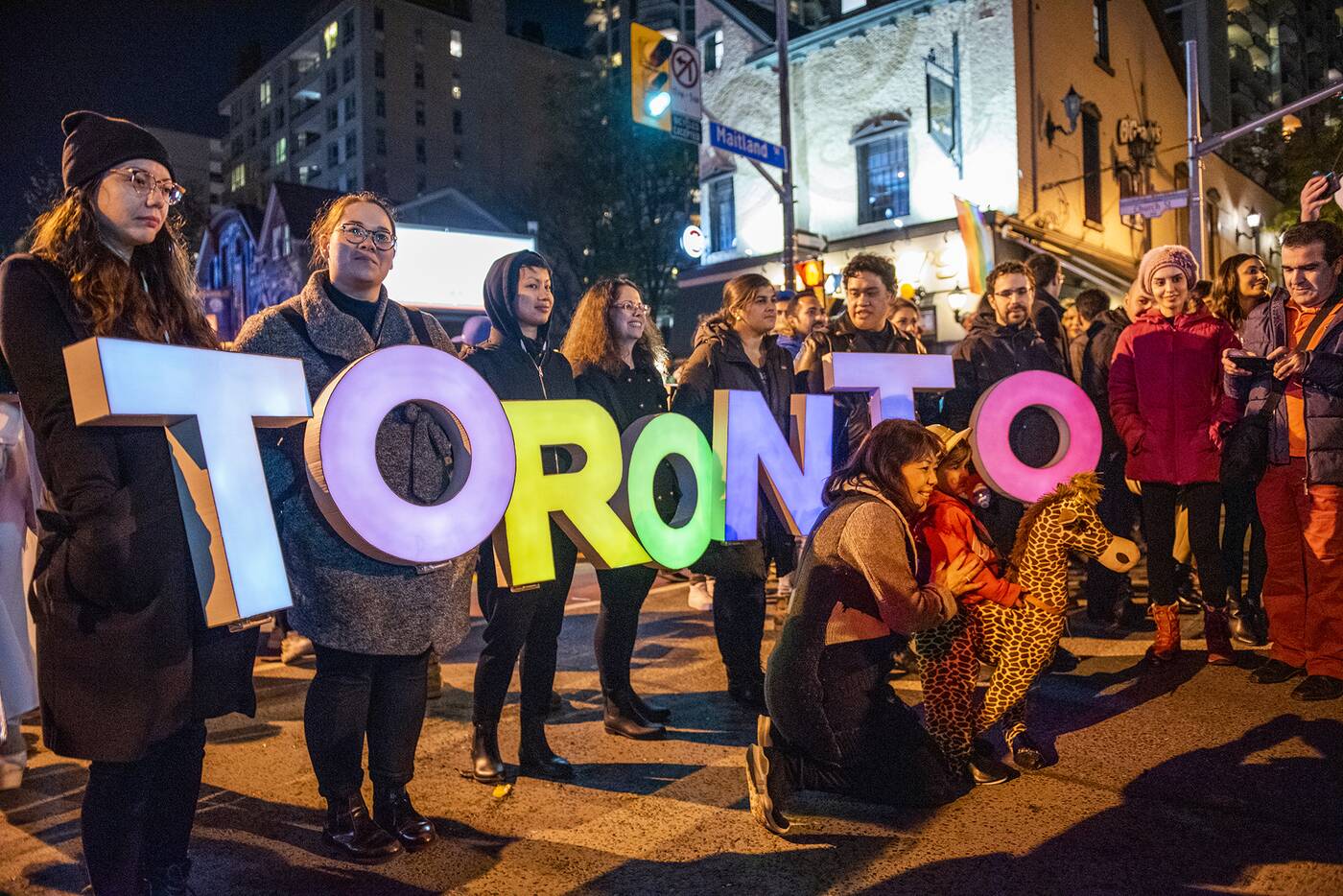 You can't get any more Torontonian than this. This is the perfect DIY group costume until you start missing some letters from your group. Photo by Hector Vasquez.

Nothing screams Toronto like dressing up as the iconic sign. This would be a great group costume for you and your friends. All you'll need is some cardboard and some paint to create all the letters. Or if you're not that crafty, you can grab some t-shirts and draw the letters on the shirt instead.

Don't be one of the basic couples costumes at the party and dress as this Marvel power couple. I won't spoil anything about the hit series but pick your favourite era in which the characters were in and get dressed up as the iconic Wanda Maximoff and Vision. Don't forget to grab some capes and red face paint.

A member of the new Gossip Girl reboot cast

The original Gossip Girl was an insanely popular show in the mid-2000s and now you can relive the nostalgia of the beloved series with the new reboot. Grab a blazer, a tie, a plaid skirt or khakis and you'll fit right in. Don't forget the iconic headband Blair Waldorf always wears.

When at home most of us aren't sporting the whole business casual wear and only wear office-appropriate attire from the waist up. All you'll need is your everyday work form home outfit, your computer, and a cup of coffee and you've got a complete costume. 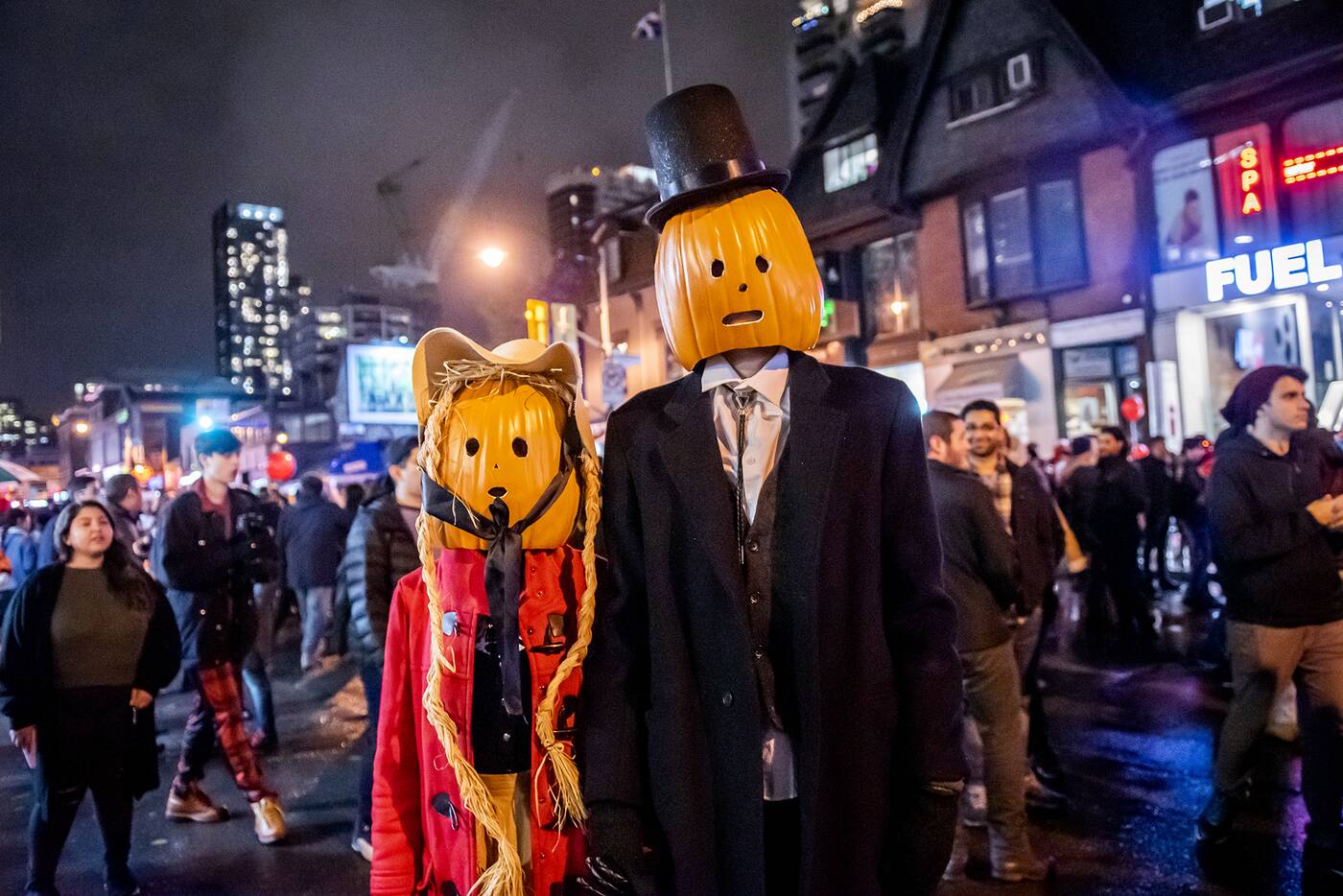 A trend going around on TikTok is pumpkin head photoshoots. If you want to join in on this trend, all you need is a pumpkin and your best fit. Carve out your best jack-o-lantern face then place it on your head and you're all set. Just be careful when walking around since the fall vegetable could be heavy and may block your vision.

The live-action remake of the beloved Disney film has become a hit and also a great costume idea. All you'll need is a split dye wig, a red dress, and a massive faux fur coat. If you have a dog, grab your furry best friend to top it all off. Bonus points if you actually own a dalmatian.

The newest Suicide Squad movie came out earlier this year and features some of your favourite DC characters. Grab your friends and dress up as your favourite member for an epic group costume.

These little critters have become a bit of a meme in the city. From the dead shrines to getting caught in weird places, this would be an easy costume to gather. Just grab some striped clothing and get into a compost bin. 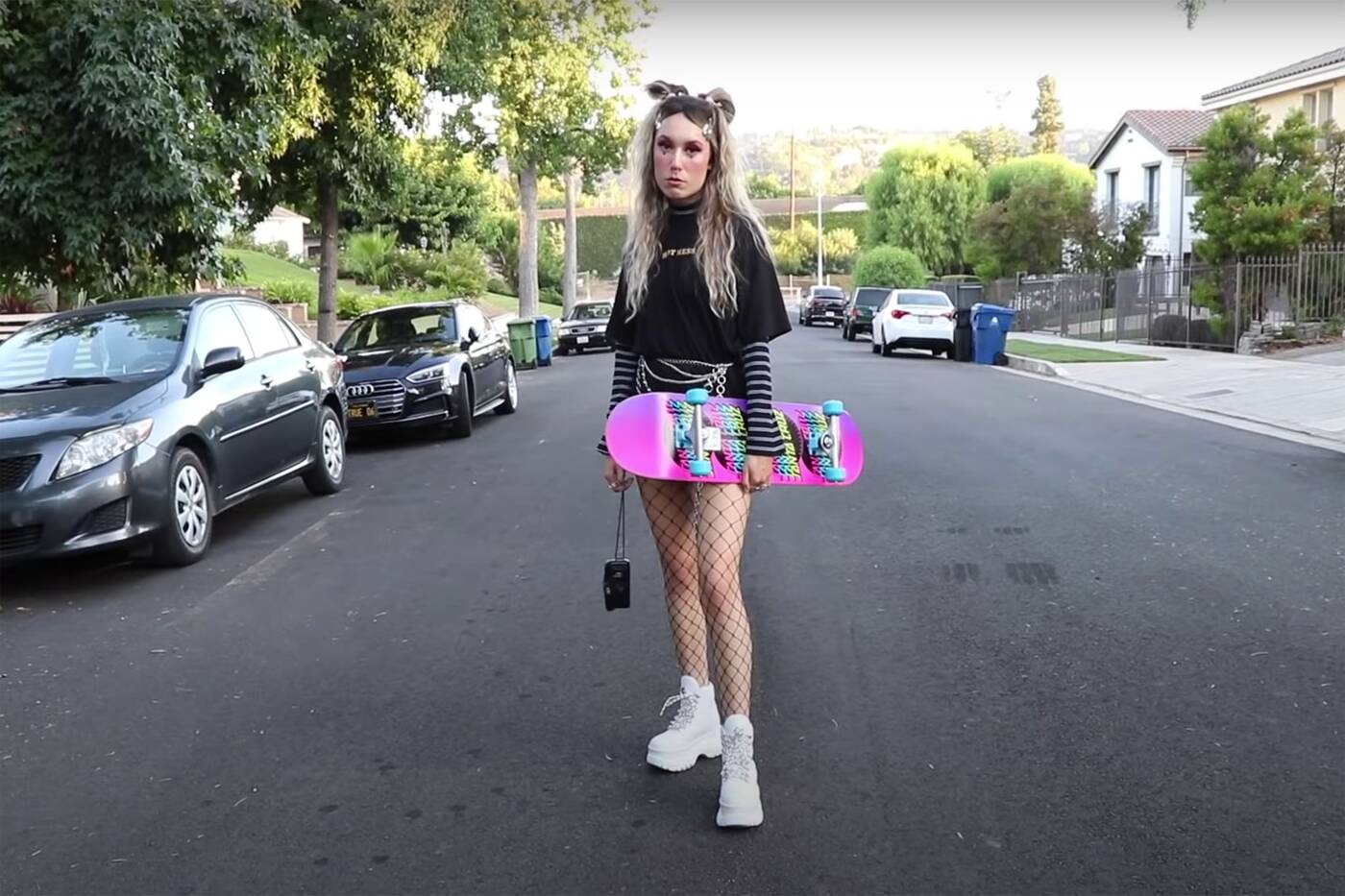 If you don't know or have seen an E-girl before, think of Billie Eilish. She's the perfect example of what E-girls look like. Photo via Kristen Macatee.

One of the biggest fashion trend phenomenons has been dressing like an E-girl or E-boy on TikTok. For those confused about this costume, it's a modern-day angsty, emo subculture. Instead of dressing in all black, you'll be dressing in striped shirts with a ton of leather accessories. You'll also be sporting an exaggerated amount of blush and black hearts all over your face.

Anyone who has a smartphone has played this game for most of the year. Try not to be suspicious and dress as your favourite character.

If you don't know what Cheugy means, it's defined as something that's out of date or someone trying too hard. If you have any old clothes from the last decade, then they would be perfect for this costume. Pair your skinny jeans with some Adidas slides and a Starbucks coffee cup and you're good to go.