Monsieur Barber Shop & Spa opened quietly in the Annex about five months ago just steps from the Miles Nadal Jewish Community Centre. Co-owner Al Rubaie tells me he was looking for a high profile location, to break the image of the barber shop "located at the back corner of some strip mall, by the shoe repair shop and the dry cleaner."

Men in Canada, according to Rubaie, aren't used to pampering themselves. He says that while it's hard enough selling them on facials, waxes and massages at his new high-end shop, it's just as hard convincing them to take a complimentary drink from the fridge he's put by the chairs in the waiting area.

With Monsieur, Rubaie has eschewed the ascetic standard of the midcentury barber shop in favour of a more baroque look full of dark, figured wood, gilt and ironwork - less "shave and a haircut two bits" and more "Barber of Seville." He's also beefed up the services on offer quite a bit, hoping to tempt men away from just short-back-and-sides or a straight razor shave on the morning of a wedding.

There's a big difference between having your hair cut and being groomed. (In, say, Mad Men terms, it's the difference between Harry Crane and Roger Sterling .) I have always opted more for the former than the latter, sharing the same tonsorial timidity that Rubaie sees among his customers, and it's the biggest obstacle he's trying to overcome. 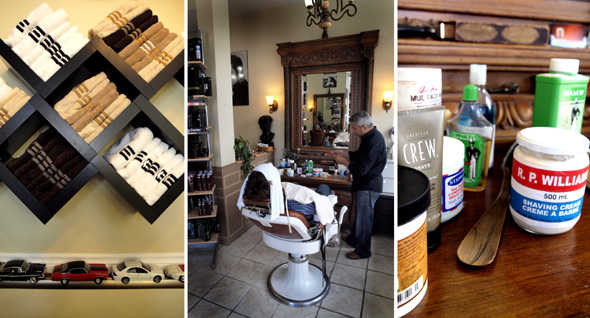 I sit down and ask for a sample of services, and Rubaie decides that I need a haircut before anything else. There's not a lot of hair to work with, which is why it's thoughtful that Monsieur offers a simple buzz cut for just $20, as opposed to a full wash, cut and style for $25. We decide to move on to a shave, but before we get that far, Rubaie suggests that I try a session of "threading" with Sarah, his partner, who's the shop's expert.

Popular in Asia and the Middle East, threading has caught on here in some women's salons for eyebrow care , even though it's even more effective for men with an excess of whiskers high on their cheekbones or - try not to wince - an excess of ear hair. (Before you click away in a fit of squeamishness, under-30 men have to come to grips with the exciting changes their body still has in store for them. Don't judge the oldster with the bristly penumbra of wiry whiskers on their lobes, for the very simple reason that it will happen to you .)

Sarah sits me down in the shave chair and pulls out a length of blue nylon string, which she twists into a sort of braided scythe and proceeds to harvest the bristles on my ears. After twenty minutes my ears are as red as a ripe peach, but they haven't been this smooth since I was in grade school. Rubaie moves in for the full-service shave, a process involving multiple hot towels and a facial at the end that takes an hour, though I end up nodding off through much of it, as Rubaie predicts. "Most of my customers sleep through their shave," he says, "especially if they're used to having straight razor shaves." For busy or overworked men, Rubaie adds, it's part of the whole male spa experience.

With over 25 years experience each in the business, Rubaie and Sarah could be charging a lot more for the services on offer at Monsieur, which are priced much lower than comparable services at full-service unisex of women-only spas, but they're trying to build a clientele among men who need coaxing to expand their definition of personal grooming. They'd probably do a lot better if they went unisex, but prefer creating a comfort zone for men for whom the word spa is front-loaded with estrogen.

The combination of hair cut, shave and facial would have cost $65 separately, but Monsieur offers a package for just $45, though the threading would cost extra. Arriving home, my wife says that I look years younger, and even male friends and relatives comment, going so far as to notice my baby-smooth ears. And yes, I know that's too much information. 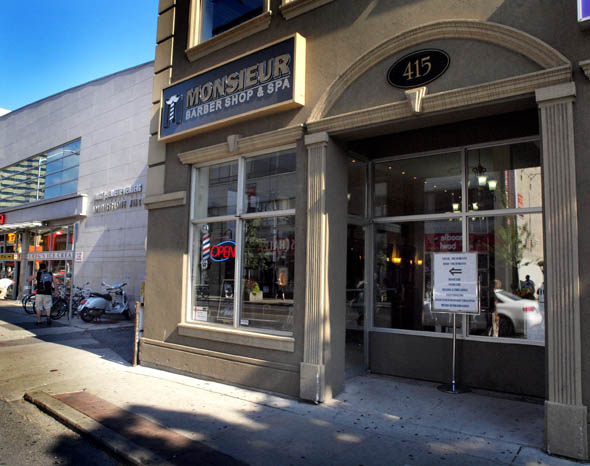