Garrison's By The Park probably has the best view of any barber shop in the city. Most barber shops look out on a stretch of retail streetscape or the hallways of a mall or hotel lobby, but this new entrant to the field has front windows that frame the southeast corner of Trinity-Bellwoods Park, and its smaller back window looks out at the red and cream brick of Farr House and the condo complex that wraps around it. The space was co-owner Doug Stewart's home for a couple of years, and last year he and his wife Hollis Hopkins had the bright idea of turning it into probably the city's most relaxing barber shop.

They began work last November, having convinced barbers Sydney Woods - Doug's regular hair-cutter - and Alan Brown to go in with them. The result is a bright space that, despite the opening up that Victorian spaces need in this day and age, retains the building's vintage feel. An antique city map covers much of one wall, along with a display of photos of the area from the city archives, while Stewart and Hopkins have set up little displays of retro men's accessories by the park-framing windows. 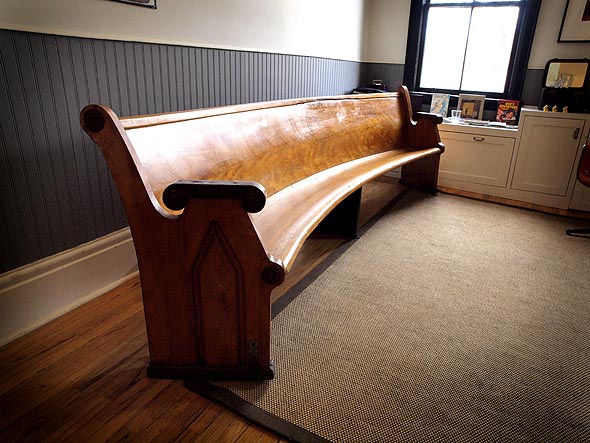 Stewart looked around at the other guy-friendly barber shops that have been opening up around Toronto and decided to nix the flat-panel TVs tuned to cable sports since they "shut down conversation," and he wanted his customers to have a chance to socialize. Free beer and hot toddies (in the frigid winter months) come with the price of a haircut or shave - $35 for a cut, @25 for a shave, and $50 for the package of two - and there's a spacious deck at the back ready for customers who don't want to cool their heels on the curved church pew inside when the sun is shining. 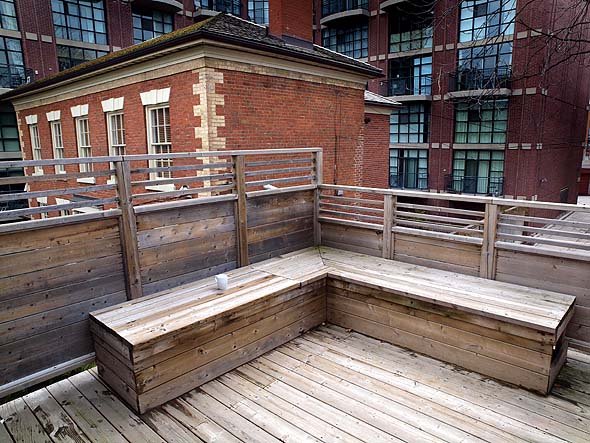 I sit down in British ex-pat Alan's chair for a shave and trim, which begins with hot towels and an application of pre-shave glide balm from local shave product makers Crown Shaving Co. , rich with herbals and a feature of Garrison's. Alan works patiently and carefully, working with the grain of my almost two-week-old beard, careful to avoid triggering the neckline rash I get from quick shaves, and which he was courteous enough to ask about before starting. 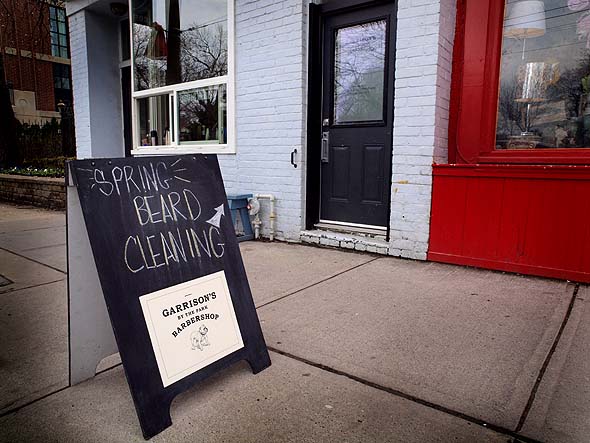 If you suffer from an excess of moles, bumps, ingrown hair or any other epidermal issue, then Garrison's is probably the place for you - Alan gave me a shave as clean and close as I've had while working with some very sensitive skin, all the more so since it hadn't seen a razor since Lent. The haircut that followed was quick and clean, exactly what you'd expect when you asked for a close buzz in preparation for the summer months.

You might have a hard time finding Garrison's if you miss the little sandwich board out front or the rotating barber pole by the door, but Stewart says he's planning to add a vintage-style mural to the east wall of the building, in keeping with the neighbourhood's retro character. He's also working on promotions with local businesses like Capsule Music , Green Shag , Grreat Stuff and the nearby Fred Perry outlet , in the hopes of creating a "neighbourhood shop" for local guys.