How much trust do you put in your morning cup of java? It turns out Canada places quite a bit of trust in brewed bean water, at least the kind served up at Tim Hortons.

Canadians' well-known addiction to Tim Hortons has propelled the coffee and donut chain to a prestigious position, ranked as the most trusted brand in Canada.

Morning Consult's Most Trusted Brands 2022 list just dropped, shining a light on which brands countries place the most trust in. And Timmies ranks among some real heavyweights in the global industry.

The rankings were determined by a representative sample of populations in countries across the globe, including 1,000 residents in Canada, and Tim Hortons came out on top with a net trust score of 52.25.

While markets like South Korea and Japan also ranked brands closely associated with their countries' images as their most trusted, their choices of companies like Samsung and Toyota represent significant foreign exports and serve as symbols of national pride.

Samsung manufactures a wide range of electronics for global export, while Toyota is the top-ranking auto manufacturer on the Fortune 500 list.

In Canada, cheap coffee in a paper cup and Justin Bieber-branded products are somehow elevated to the same level of brand prestige.

The United States' most-trusted brand was Band-Aid, while China and Germany both went with online payment methods Alipay and PayPal.

In Canada, we put our trust in sugary donut holes promoted by pop stars.

Other top rankings include Google in India, LiDL in France, Boots in the U.K., and WhatsApp in Italy. 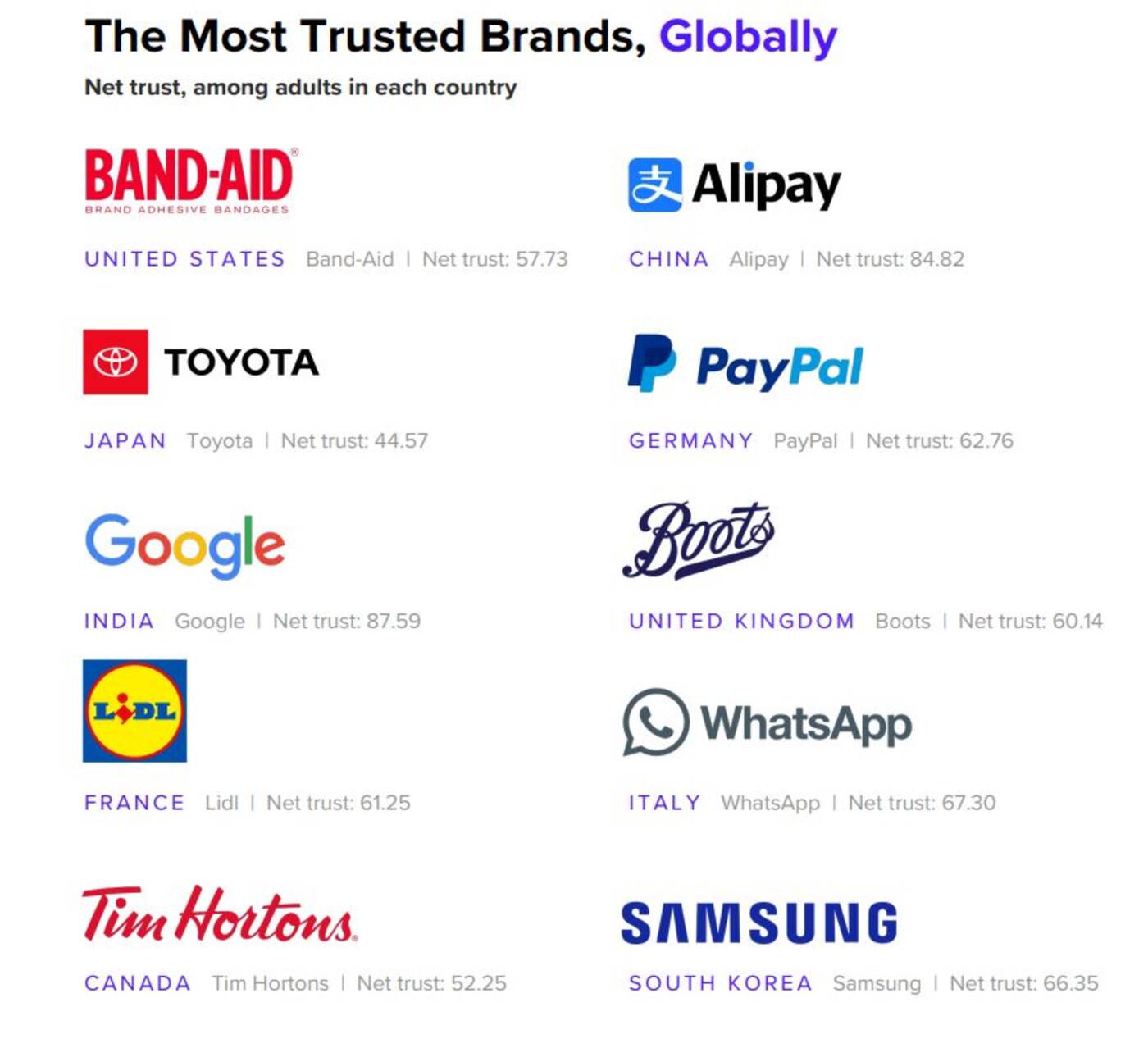 A slim majority of Canadians polled do not inherently trust companies, 42 per cent of respondents agreeing that their trust must be earned.

Slightly fewer, at 40 per cent, say they tend to trust companies, which must do something bad to lose their trust. The remaining 18 per cent sat in the middle, saying they did not know or had no opinion on the subject.

Gen Z and millennial respondents ranked among the least trusting in Canada.

Small businesses ranked the highest for trust in institutions in the country with 81 per cent of respondents, followed closely by food and beverage with 71 per cent.

At the other end of the spectrum, only 32 per cent of respondents put their trust in social media while only 40 per cent trust major global corporations.

But as comical as the Tim Hortons ranking seems next to major global brands, it's not too difficult to understand why people would place their trust in such a familiar symbol of shared Canadian identity that spans across our social and cultural mosaic.

Canada is almost 10 million square kilometres in area, and over 9,300 kilometres wide at its maximum.

And yet somehow, from Iqaluit in the north to Leamington in the south, from Cape Breton Island in the east to Vancouver Island in the west, your cup of Tims will always taste pretty much exactly as you remember it.

The report on trust in the food and beverage industry cites the brand's ubiquity with over 4,000 locations nationwide (more than triple the number of Starbucks and McDonald's locations) as a contributing factor in the top ranking.

National pride in the brand is what really cemented its position, the report stating Tim Hortons' routes in Ontario and its namesake's career with the Toronto Maple Leafs as an integral part of the brand identity.

Promotions like "Roll Up To Win" have been played by more than 80 per cent of Canadians since the game's inception 35 years ago, while recent promotions like all the Biebs-branded food, drinks, and merch have increased brand awareness and loyalty among younger demographics.

And sure, Toyota cars are dependable and Samsung electronics can be flashy, but they'll eventually rust and degrade. Meanwhile, Tims is always going to be Tims.