How a Toronto restaurant and bar became an essential neighbourhood hangout

Few places in Toronto have built up a loyal following as rapidly as Drom Taberna, a business unlike any other in various respects.

A big part of Drom's success is a passionate, dedicated team with an infectiously positive work ethic: "We operate on a basis of three things: keeping the customers happy, the musicians happy, the staff happy," says co-owner Thom Fitzgerald. "If all three of those are met, it is a successful night."

During lockdowns Drom Taberna pivoted to stay open as a deli and was one of the first destinations to offer live music again as soon as Ontario said they could.

Safely programming bands on their rooftop, side balcony and eventually on their patio, they survived, specializing in the essential business of lifting spirits.

The roots of Drom go far back to Kensington Market where their sister restaurant La Palette originated just over 20 years ago, and where married couple Shamez Amlani and Maria Litwin (the owners of La Palette) first hired Thom Fitzgerald and Misha Artebyakin as servers.

Since July 2018, all four are co-owners of Drom, steps away from La Palette, the popular French bistro now operating at 492 Queen Street West. Fitzgerald recounts the inspiration:

"When Tortilla Flats went out of business, we saw what happened to other places along the stretch, The Hideout being another live music venue that got pushed out to become a Taco Bell which then became a Wendy's – we didn't want that to happen to the former Tortilla Flats so we took it upon ourselves to make sure that Queen Street remains culturally relevant, so we opened up an Eastern European venue.

We looked at everything that existed on the stretch and we didn't want anything that was in direct competition, we wanted to complement the scene that was already happening.

Eastern European food was something that we were all very passionate about, with two of the owners originally from that part of the world.

Inspired by the monthly Pedestrian Sundays in Kensington Market, we decided to open up a live music venue – a place where people from different cultures could come and experience food, music, language, in a melting pot representative of what Toronto is as a city, and try and put it into a brick and mortar location happening every day instead of just once a month.

Pretty soon we noticed when we programmed an Arabic band and a Brazilian band on the same night, musicians from different cultures began to know each other and different fusions would start to happen, which has been a very satisfying development."

The Ukrainian style borscht is a comforting beet soup served with sour cream and a slice of rye. Georgian shashliks are perfectly grilled skewers which change seasonally.

"Our goal, which is a pretty crazy one I admit, is to try and please the Eastern Europeans all of the time," says Fitzgerald. "So when somebody says 'it's pretty close to my grandmother's recipe,' that's the compliment we go for." 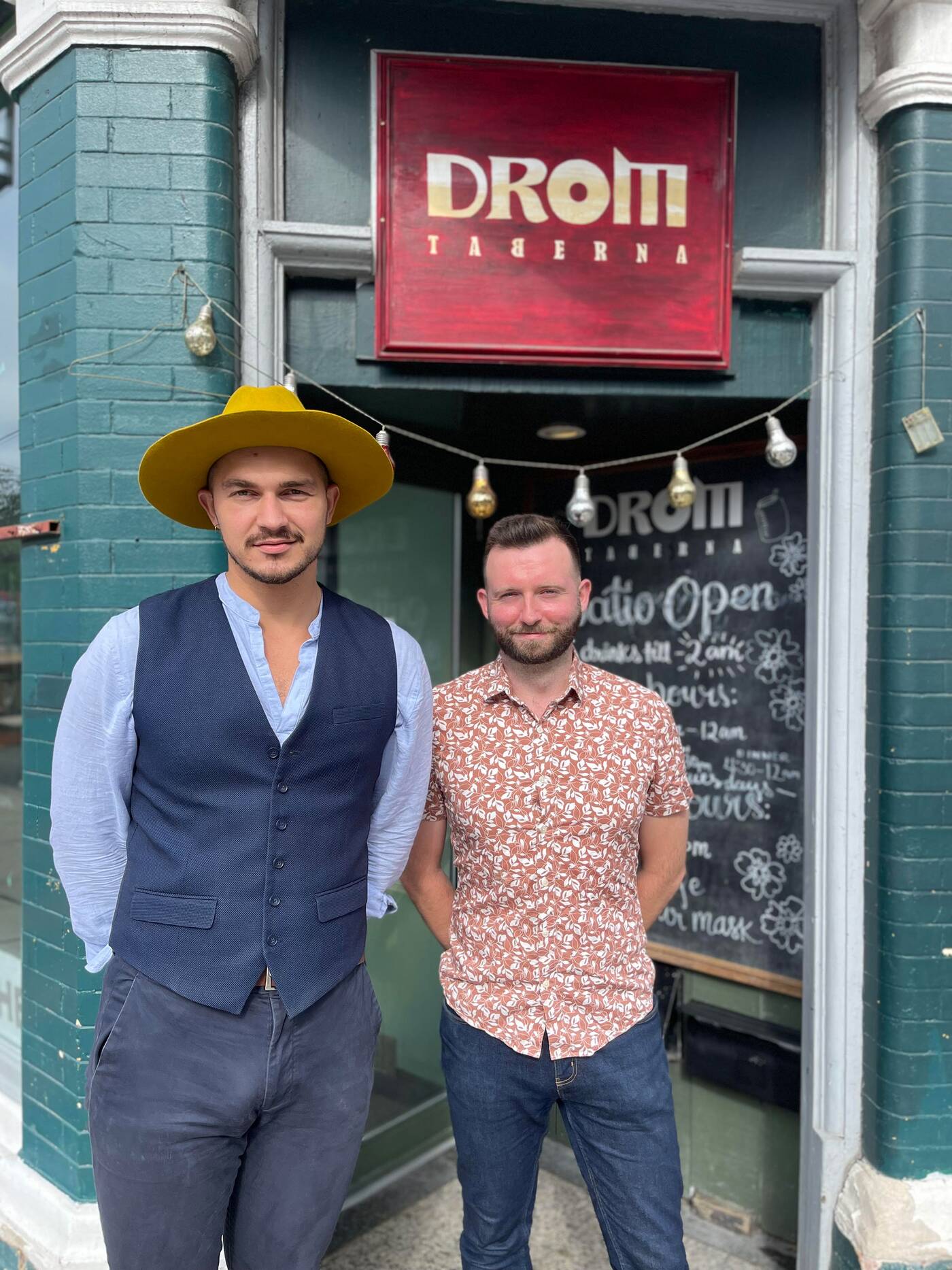 There is an exquisite selection of beer, wine and cocktails from this part of the world, as well as their popular homemade vodka infusions.

"In the summer we drive to our friends' farms in Brantford and Port Dover, to pick our own strawberries and black currants. The flavour that results is seriously outrageous,” explains Fitzgerald.

As a live music destination, Drom Taberna programs a diverse array of genres, including brass bands, jazz, blues and world music artists. There is never a cover charge at the door; instead, at the end of each set, co-owner Misha Artebyakin delivers an epic hat speech before passing the hat.

You can hear a pin drop when he emphatically thanks the audience for choosing to support small business, live music and Toronto culture, in a darkly humorous yet resonant address emphasizing the nobility of artists pursuing their dreams in a world which often takes them for granted and encourages them to give up and get a day job instead.

"The hat speech started simply with the idea of making money for the musicians," says Artebyakin.

"At the very beginning these speeches were not quite as robust as they are today. The more you talk to musicians, the more you witness what's going on, you realize the entire structure of people who keep us sane is so underappreciated and so overlooked."

Artebyakin says he now looks at the speech as an educational opportunity. Instead of just talking about the money, he feels it's more important to change people's perspective altogether.

"We don’t just want you to give musicians more money when you're at Drom ," says Artebyakin. "We want you to be generous to them always."

Explains Artebyakin, "I want them to understand that musicians need us, because we need them."