RendezViews patio in Toronto has been a place to cheer on the Canadian Olympic team, get patriotic while watching the Euro Cup, catch up with friends over pints or even get a haircut, catch a comedy or drag show.

It's the largest patio in Toronto and also the most electric as it quite literally beams with colourful good vibes thanks to its brightly painted picnic tables and a massive one-of-a-kind murals.

However, the space wasn't always so bright.

The parking lot is a city property and was purchased in 2017 with the plans of becoming a park. The city put up a fence around the property and went on to complete other projects around Toronto.

After over a year of vacancy, Oliver Geddes, Owner of The Fifth Social Club had the idea to turn it into something more.

Geddes thought, "We have this vacant space, this would make a phenomenal patio."

The Ballroom had a similar idea, thus they partnered together and brought the patio to life. The Ballroom runs the west side, The Fifth runs the east side - however, it's marketed and run as one exuberant patio in the heart of Toronto with dazzling views of the CN Tower. 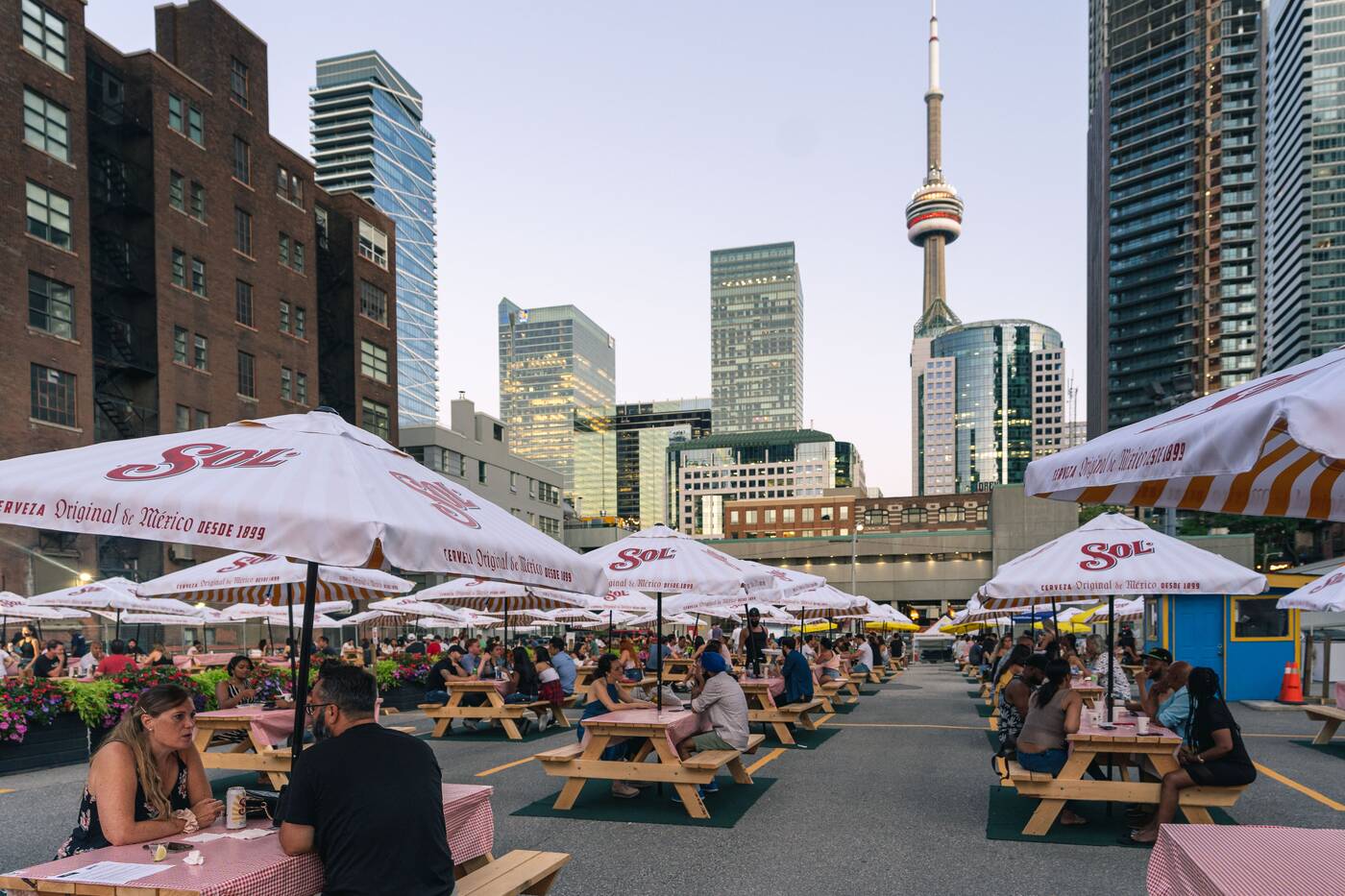 Rendezviews patio as it looked in the summer of 2020 before the colourful makeover. Photo by blogTO.

The Ballroom and The Fifth then worked intensely with the local BIA. The vision came together for the Summer of 2020 during the course of only 2 weeks.

The team started working on getting the 2021 season lined up but was sidetracked when the province-wide lockdown hit in late November. But around the same time, Mayor John Tory declared 2021 the year of the art.

"So we thought, what if we took art as a vehicle to not only elevate the physical appearance but do something more," said Geddes.

Based on the doomy and gloomy time, Geddes and the team thought "How do we take art as a vehicle and create vibrancy, hope, optimism and rebirth - with that in mind we starting looking for our sponsors and partners."

Collective Arts Brewery saw the vision and teamed RendezViews up with artists Bruno Smoky and Shalak Attack who are collectively known as Clandestinos Art.

The 30,000 sq/ft surface of the parking lot and 15,000 sq/ft wall became the canvas for the artists to create the colourful masterpiece, titled Reflections that can be seen today.

"Our reflections of self come from our surrounding environments, families and communities. While we may have been isolated, we are craving community and the opportunity to connect on a deeper level," reads the Reflections description.

Rendezviews gifts Toronto with the joy, community, fun and excitement that was lacking during the pandemic.

Daily programing includes comedy and art nights along with many other events and pop-ups. Heineken recently offered anyone on-premise a free haircut and a free Heineken.

There was also a live game show earlier this week.

The song that plays upon opening the website is Aquarius by the 5th Dimension which is essentially about a time of the rebirth which is all about "golden living dreams of vision" and "let the sunshine in."

The tune feels like an ode to the magnificently happy place that is Rendezviews, which was born in the midst of a pandemic.