The history of Fran's Restaurant in Toronto

Fran's restaurant is the type of place that is found in many cities throughout the world. It's not necessarily known as a famous gourmet destination, but rather the kind of place where people seek good food at modest prices.

For several decades, Fran's on College Street is where people grabbed a burger or sandwich with fries prior to a Leafs game at the Gardens, or enjoyed a coffee and slice of pie after a hockey game.

Late-night inhabitants of the city visited the restaurant after imbibing generously in the bars and pubs on the Yonge Street strip, in the days when it was Toronto's entertainment centre.

Women often met at Fran's after shopping at Eaton's College Street, across the road from the restaurant. 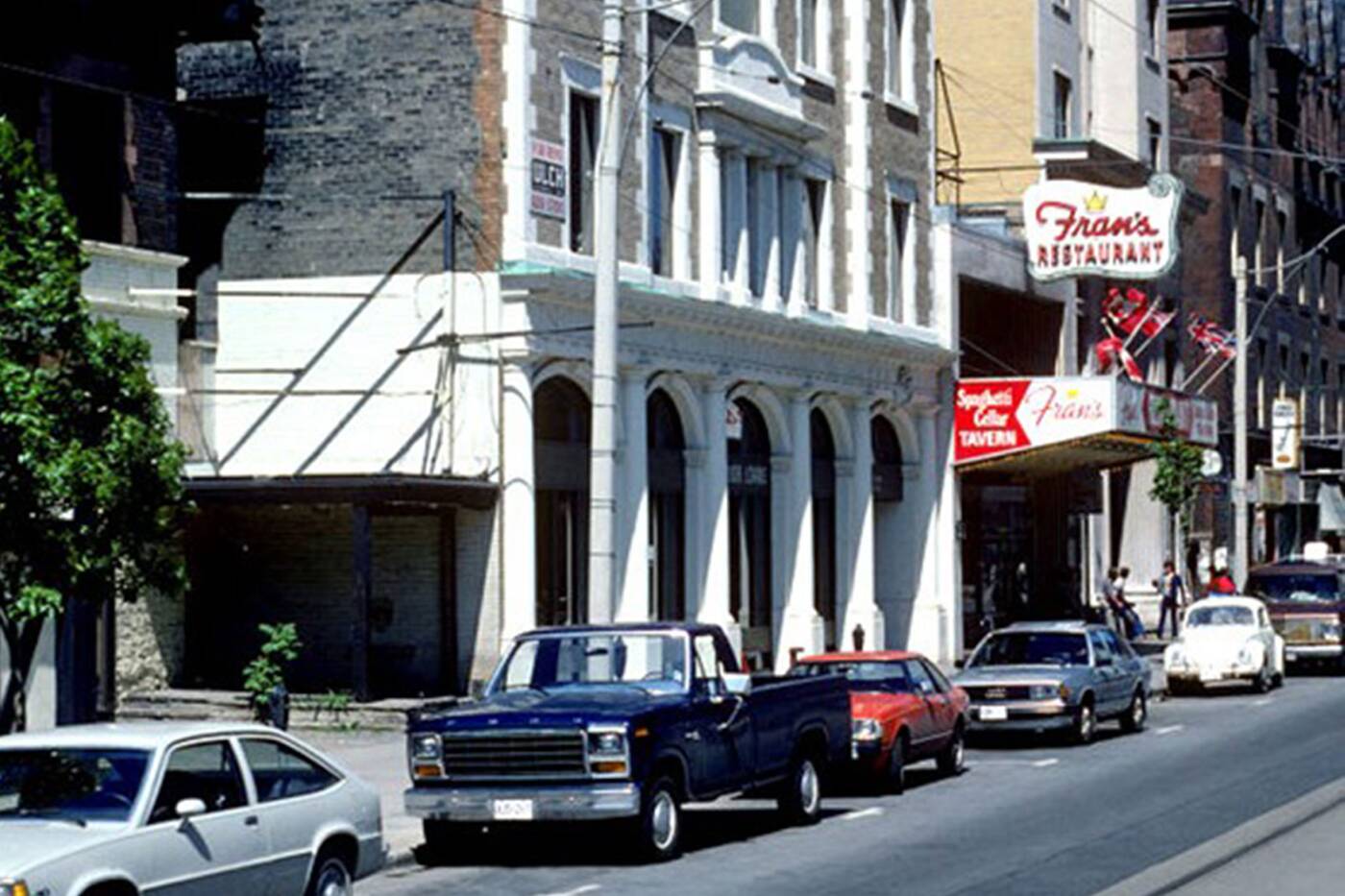 Fran's Restaurant on College Street in 1981. Photo by Toronto Archives.

The Eaton's College Street store is gone, the Entertainment District has relocated, and the Leafs have departed from the Gardens.

However, Fran's still serves food to the breakfast, lunch and dinner crowds, and remains a destination for those who inhabit Yonge Street during the late-evening and early-morning hours.

My earliest recollections of Fran's are from the year 1957, when I worked at the British American Oil Company on the northwest corner of Bay and College. Each workday morning, I journeyed south on the Yonge Subway to the College Station.

At that time, the subway had been in service for only three years. Walking west on College Street, I visited Fran's to purchase two take-out coffees, one for a fellow worker and the other for myself. Visiting Fran's was a pleasurable morning ritual.

In October of 2016, I revisited the restaurant to relive a few fond memories. On this occasion, the coffee and the clubhouse sandwich with fries, were just as good as ever.

Although the dining room had retained its family-style atmosphere, major changes were visible. A street patio and open rooftop deck had been added.

Thus, although the eatery had changed, it had also remained the same. Fran's is still a vital part of the city’s restaurant scene for comfort food. 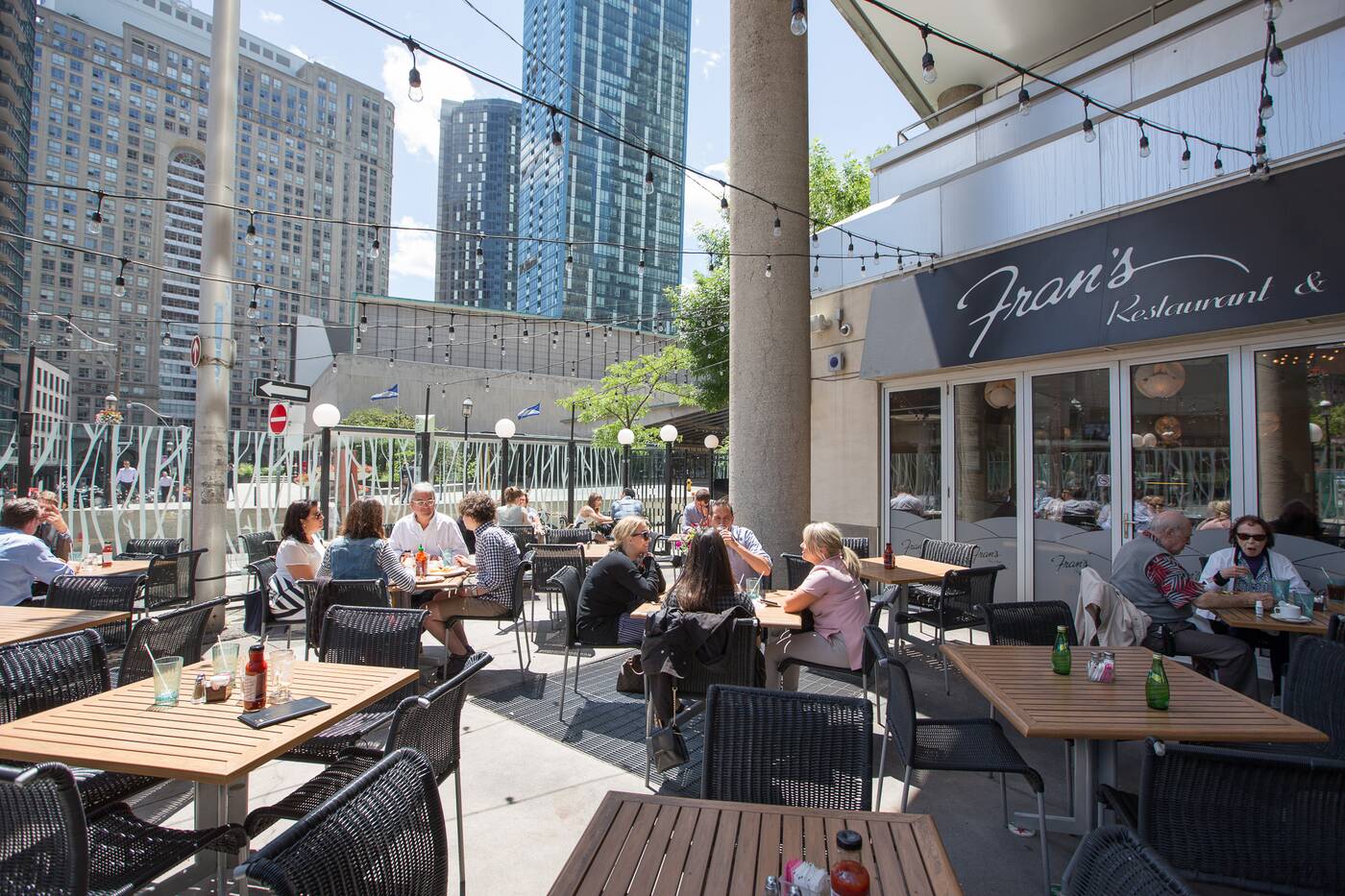 Fran's Restaurants were opened by Francis (Fran) Deck, who relocated from Buffalo to Toronto in 1940. His brother Greg remained in Buffalo and managed his own chain of eateries.

Fran brought his experience from Buffalo to Toronto, and opened a restaurant that offered good food and low prices, available 24 hours a day.

Along with his wife, Ellen Jane, Fran's first restaurant was at 21 St. Clair Avenue West, a short distance west of Yonge Street. Containing only 10 seats, it was a small diner that specialized in hamburgers, steaks and wheat cakes.

However, it soon became well known for its chili, rice pudding and apple pie. Late-night bottomless cups of coffee and over-sized breakfasts also became highly popular. The famous pianist, Glenn Gould was a regular customer at Fran's on St. Clair as he lived nearby.

Fran was reputed to have been the first to use the term "banquet burger," which was a burger served with bacon and cheese. The term is now employed widely in restaurants throughout North America. He also created his own brand of coffee, which was sold in his establishments.

In 1945, Fran opened another site at 2275 Yonge Street, near Eglinton, another at 1386 Bathurst south of Vaughan Road, and the location on College Street near Yonge in 1950.

Others were opened in the years ahead, including one in Hamilton and another in Barrie. The head office of the company was on Mt. Pleasant Road, north of Merton Street.

Fran Deck died in an automobile accident in Arizona in 1976. The business was sold to investors, but Joon Kim purchased the College Street site in 1997.

The St. Clair and Yonge Street sites have now closed, but the business on College Street remains.

In 2004, a Fran's was opened on the northwest corner of Shuter and Victoria Streets. Fran's had a booth in the Food Building at the CNE in 2014, when it offered deep-fried rice pudding.

On May 14, 2012, Leonard Cohen was awarded the Glenn Gould Prize in a gala concert in Massey Hall. Afterward, Cohen topped off the evening with a visit to Fran's.

Doug Taylor was a teacher, historian, author and artist who wrote extensively about Toronto history on tayloronhistory.com. This article first appeared on his site on November 28, 2016 and has been republished here with the permission of his estate. The article has been modified slightly.