Looking for an exceptionally rare opportunity to own a piece of Toronto history while potentially pissing off a multinational tech juggernaut at the same time?

Welcome to 40 Colborne Street, longtime home of the legendary Tom Jones Steakhouse and literal thorn in the side (the good kind) of Google Canada's brand new headquarters building.

You know, the one they announced just a few months before Alphabet cancelled its controversial "neighbourhood of the future" along Toronto's east waterfront.

The building's low scale and distinctive narrow silhouette with a canted corner are cited as unique historical features in the city's heritage register. Image via City of Toronto.

First developed as a two-storey brick structure in the late 1850s and built out between 1874 and 1943, the property in question is considered "of historical significance" and appears on the City of Toronto's Heritage Register as a late 19th century "Old Town" commercial building that contributes to the significance of the St. Lawrence Neighbourhood.

This building survived the Great Fire of 1849. It was one of Toronto's first printing shops. It was the birthplace of the famed Canadian office supply company Grand and Toy (established on site in 1883) and, for more than half a century now, it has been home to Tom Jones Steakhouse. 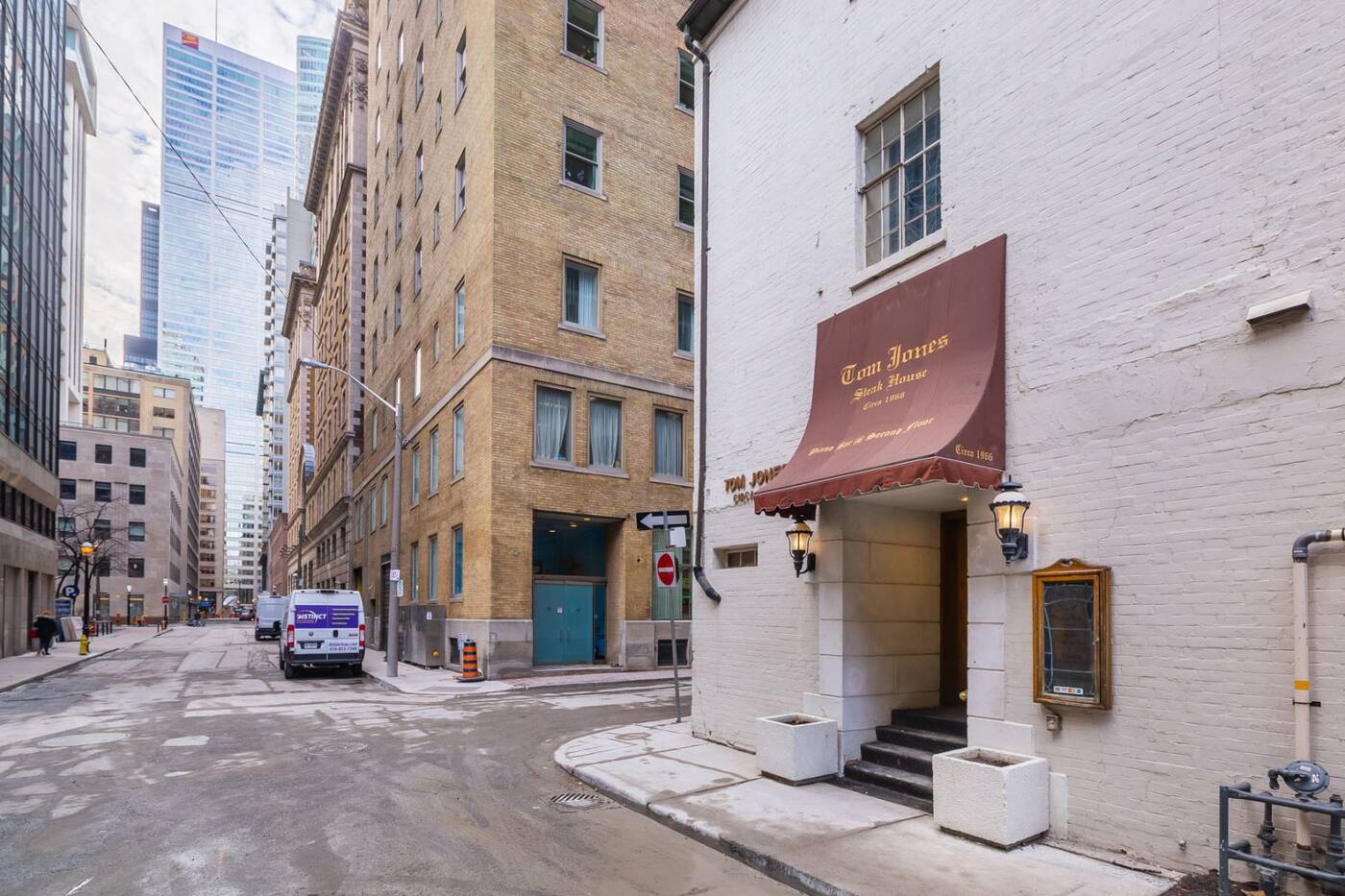 The address of the property at 40 Colborne Street is also sometimes referred to as 17 Leader Lane. Image via CBRE.

Sadly, the owners of the restaurant have decided to close it permanently, but the history-filled building that Tom Jones long occupied is available to purchase (for anyone willing to follow the city's heritage guidelines and who also has $5 million to invest.) 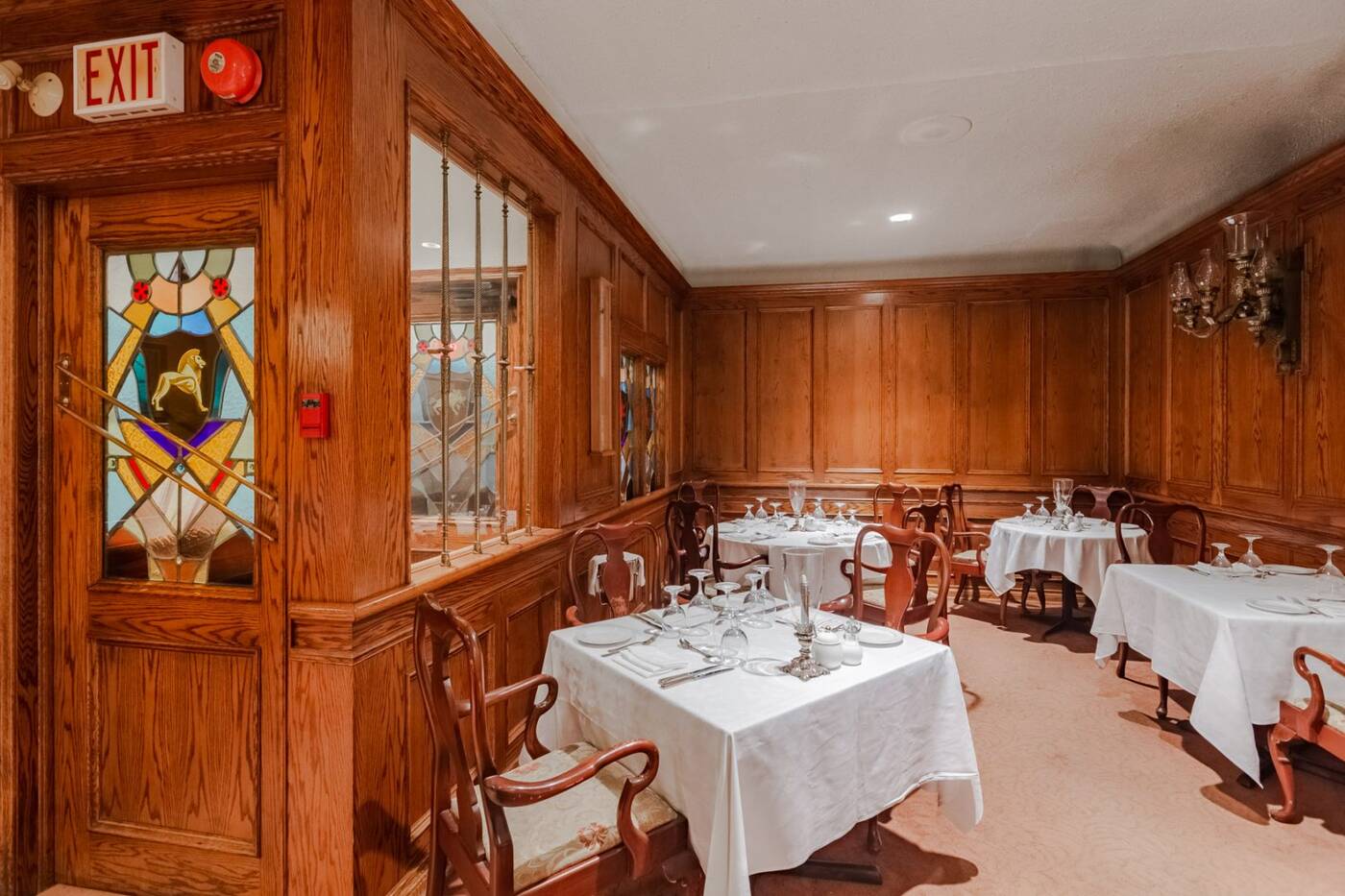 The building was revitalized in the 1960s but has historic charm to spare. Image via CBRE.

It is truly one-of-a-kind, with stained glass windows, hardwood panelling, and many other plush finishings throughout. 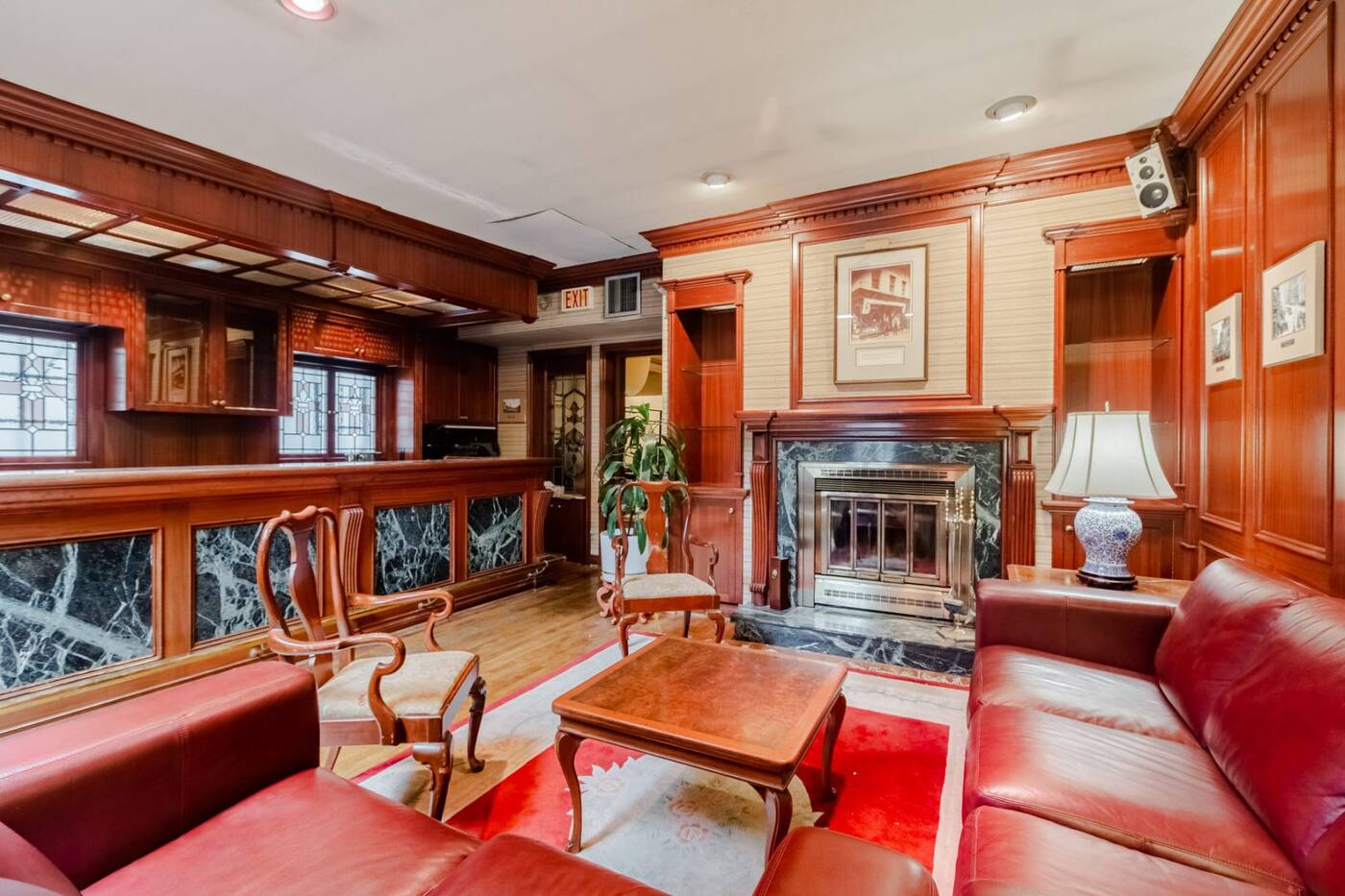 A marble fireplace and bar are lovely, though it looks like the restaurant's sound system could use a modern upgrade. Image via CBRE.

The building is also quite big, with some 5,133 square feet spread across three levels and a 1,721-square-foot basement. 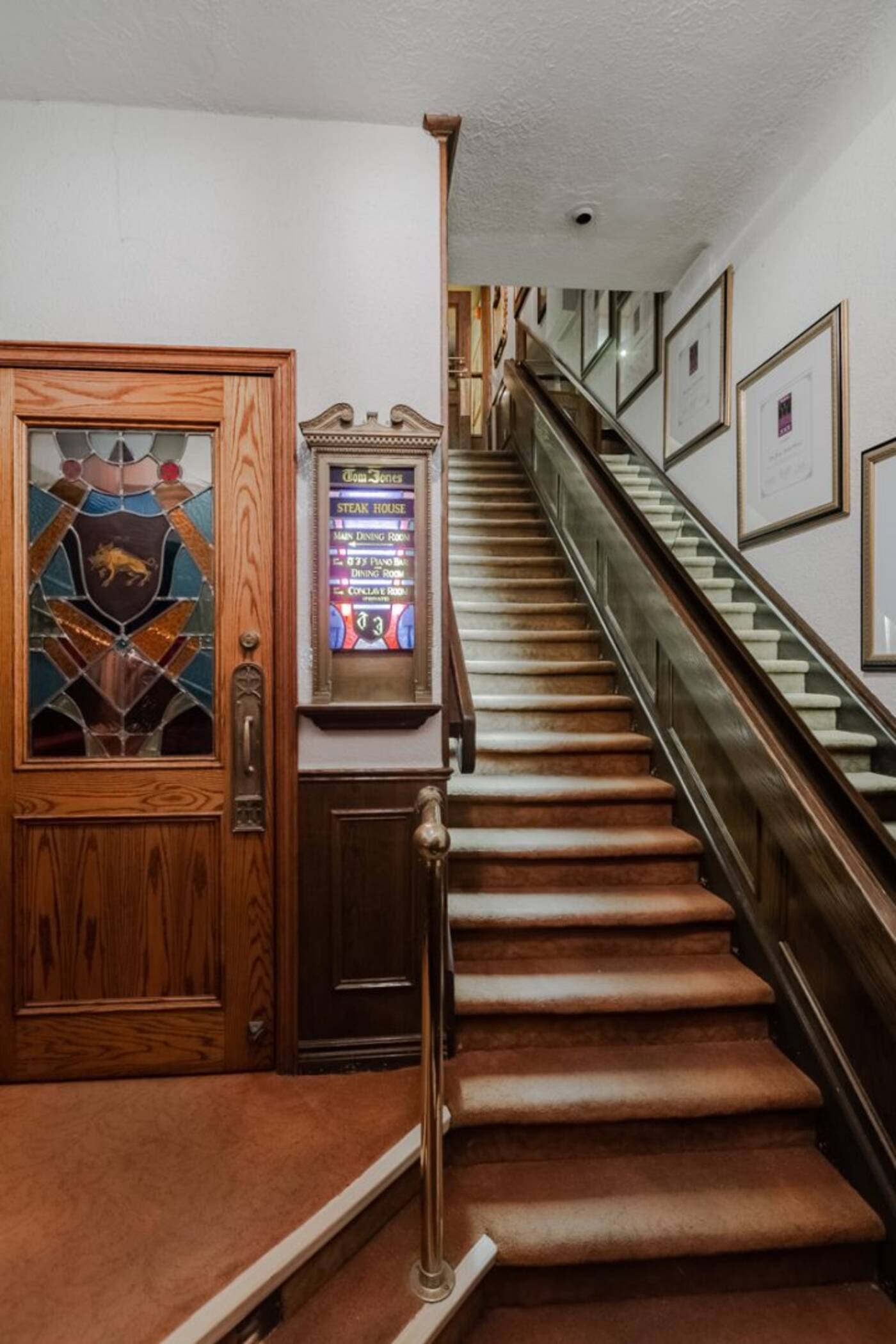 The structure was built on land designated for a court house in the 1979 Plan of York, and then owned by representatives of the Anglican Diocese of Toronto for 150 years. Image via CBRE.

What's strange — and perhaps funny to some — is that the owners would not sell the building to Google when it was developing plans for its headquarters building at 65 King Street East.

"The owners of the Tom Jones building were not interested in selling at that time," said a realtor representing the property when asked about rumours that Google was forced to build its entire HQ around the steakhouse because the owners wouldn't "play ball."

Whether this is the case or not, Google did indeed design its gleaming new Canadian headquarters building (still under construction) around Tom Jones, as depicted in the rendering below. 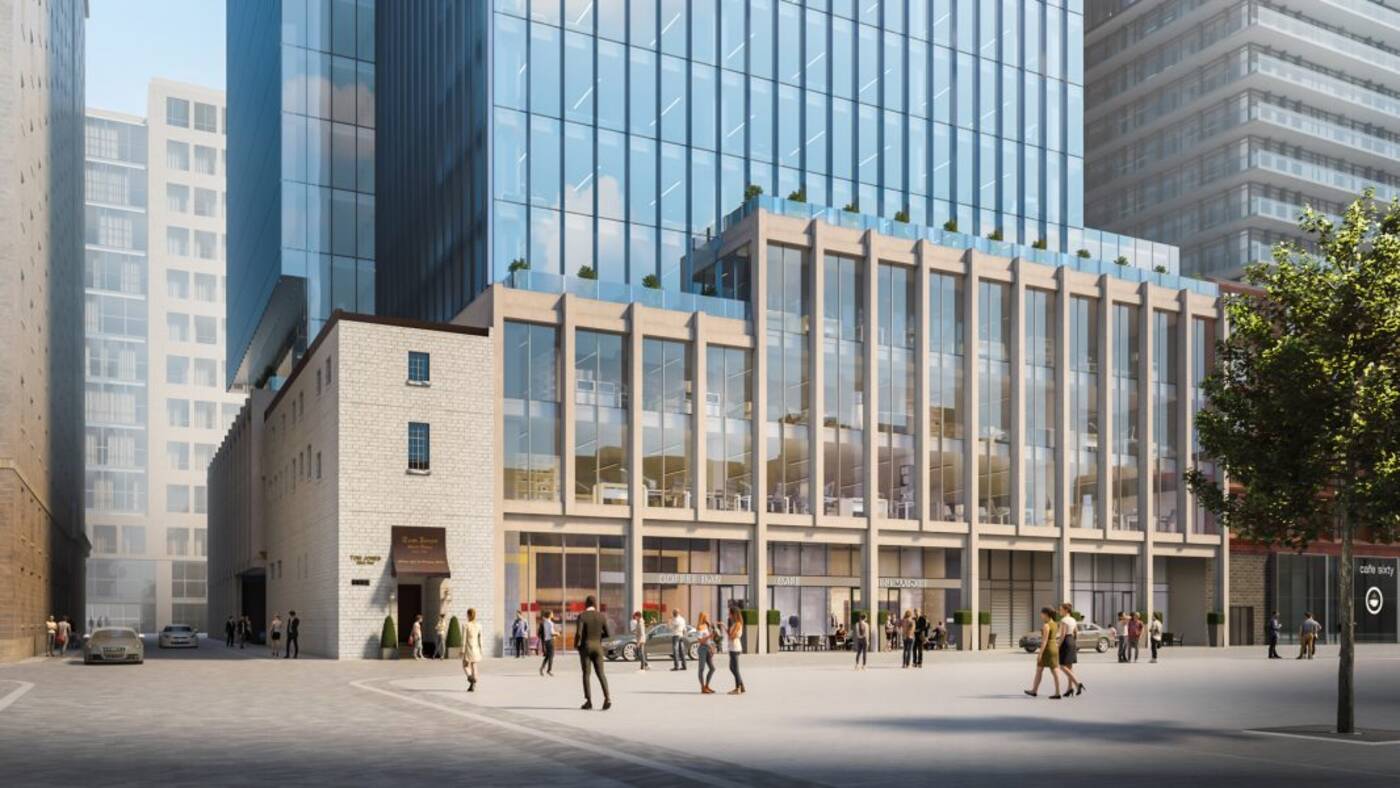 Unfortunately for Google, the restaurant's owners (who also own the building) only recently decided to sell the property, and it's well-positioned to spark plenty of interest as a prime, freestanding building in the heart of downtown Toronto.

Offers are set to be reviewed later this month before the sellers decide who gets to take over the iconic Tom Jones building.

Hopefully the chosen purchaser will have a less tenuous relationship with the City of Toronto.