The strange saga of Adamson Barbecue continues this afternoon with Toronto Police announcing that multiple charges have been laid against owner Adam Skelly and his incorporated restaurant.

At least nine charges have been laid in relation to the Etobicoke BBQ joint, which blatantly flouted both provincial and municipal public health orders this week by opening up for indoor dining.

Skelly, who is listed as director of the business, has been charged for hosting illegal gatherings, breaching indoor dining regulations and operating without a business license on both Tuesday and Wednesday. 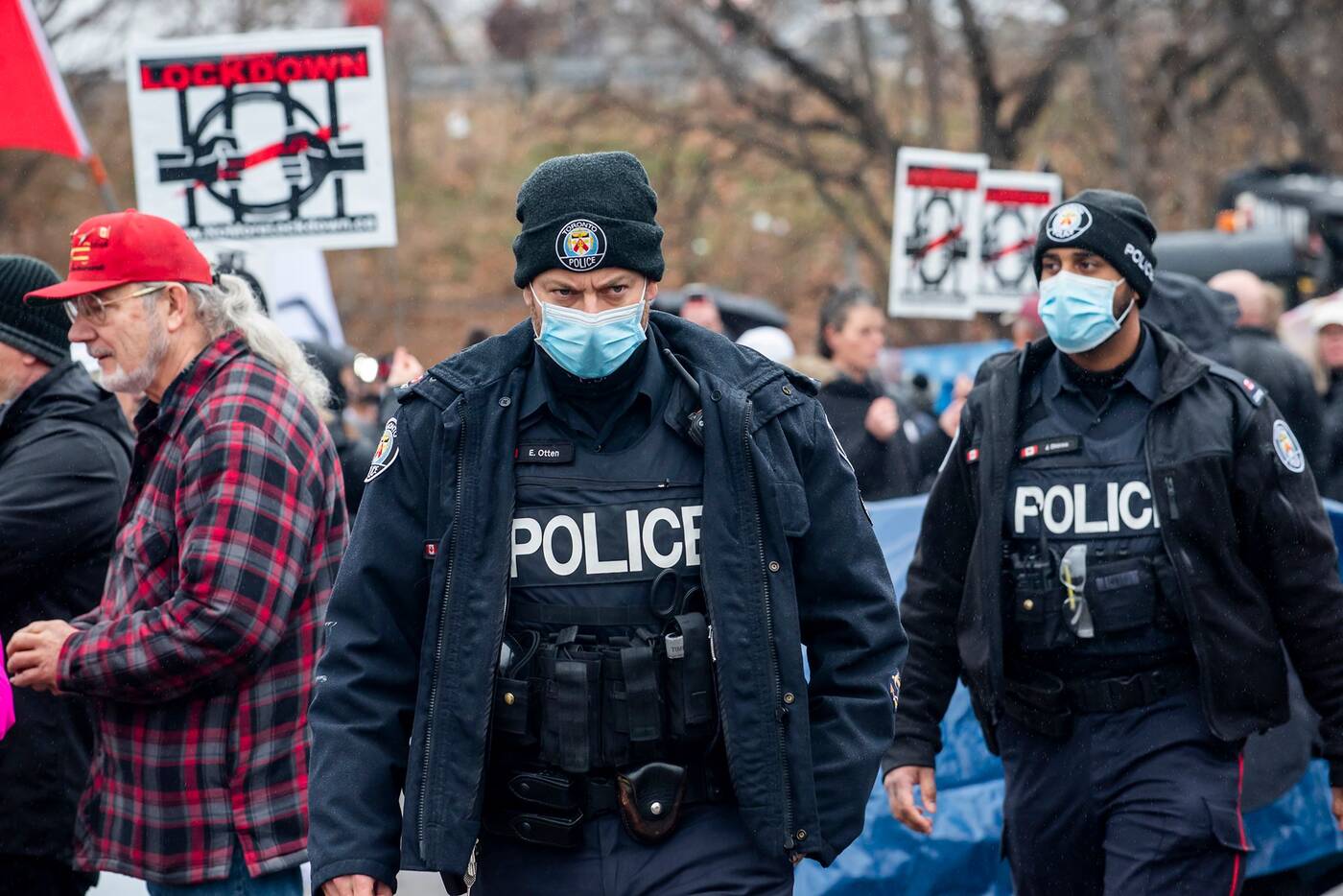 An additional charge was laid against Skelly and the Adamson Barbecue Corporation today for breaching Section 22 of the Health Protection and Promotion Act after being ordered to close on Tuesday by Toronto Medical Officer of Health Dr. Eileen de Villa.

Toronto Mayor John Tory and Premier Doug Ford both now publicly condemned what Skelly is doing, with the former going so far as to say he'd support putting concrete blocks in front of the restaurant similar to what city staff did with illegal weed stores a few summers back. 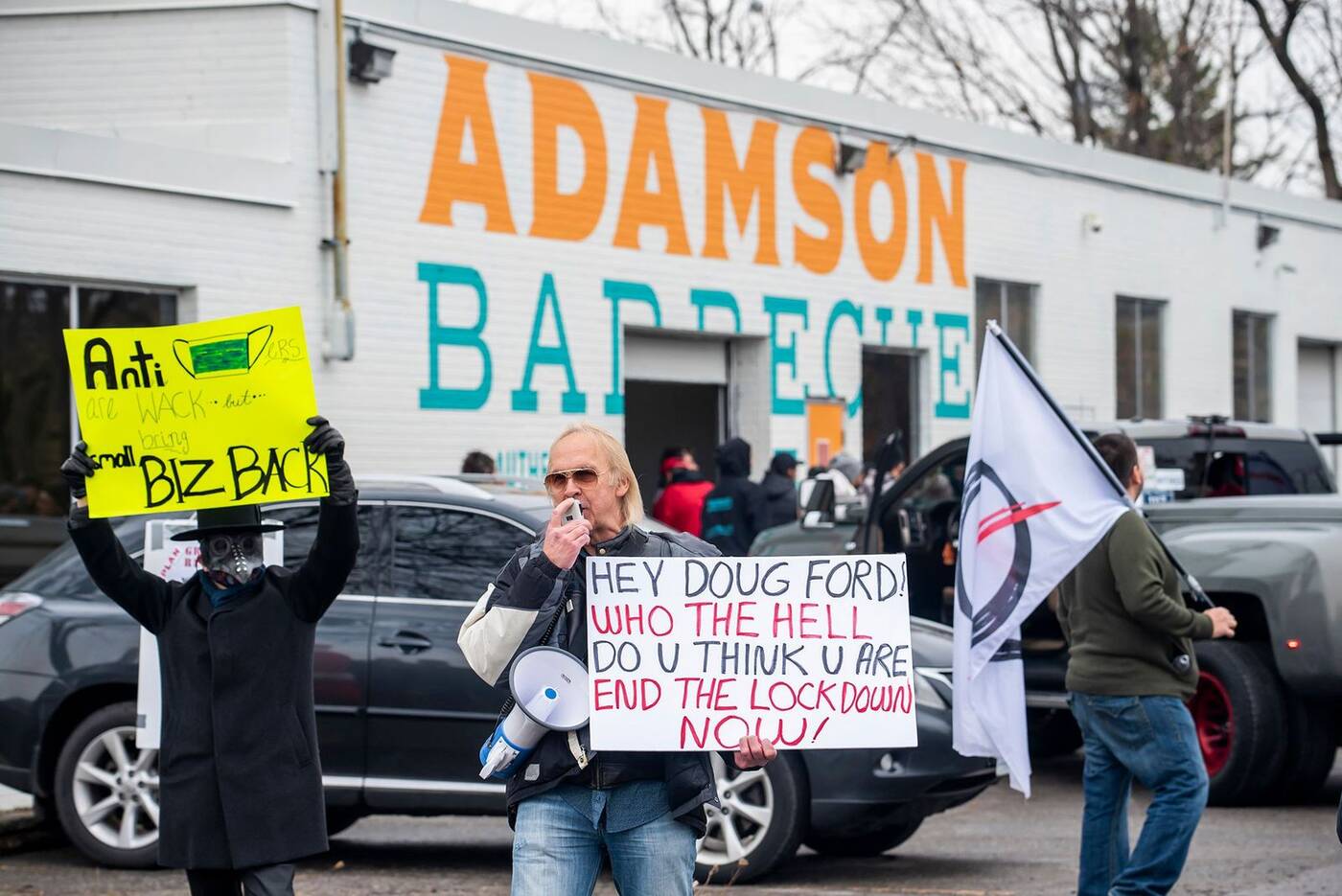 Adamson Barbecue has become a spot for anti-lockdown protestors.

When asked why it took police so long to lay charges against the businesses, Sinopoli explained that "this is a situation with a lot of moving parts" and that there are "certain limitations within the regulations as well as the public health order itself."

The TPS superintendent also said that his team was aware of Skelly's plan to reopen tomorrow and that they are ready to take enforcement actions as necessary.

Today, those enforcement actions involved speaking with Skelly and his lawyers in a decidedly calm and peaceful manner as anti-masker mobs congregated at the restaurant. 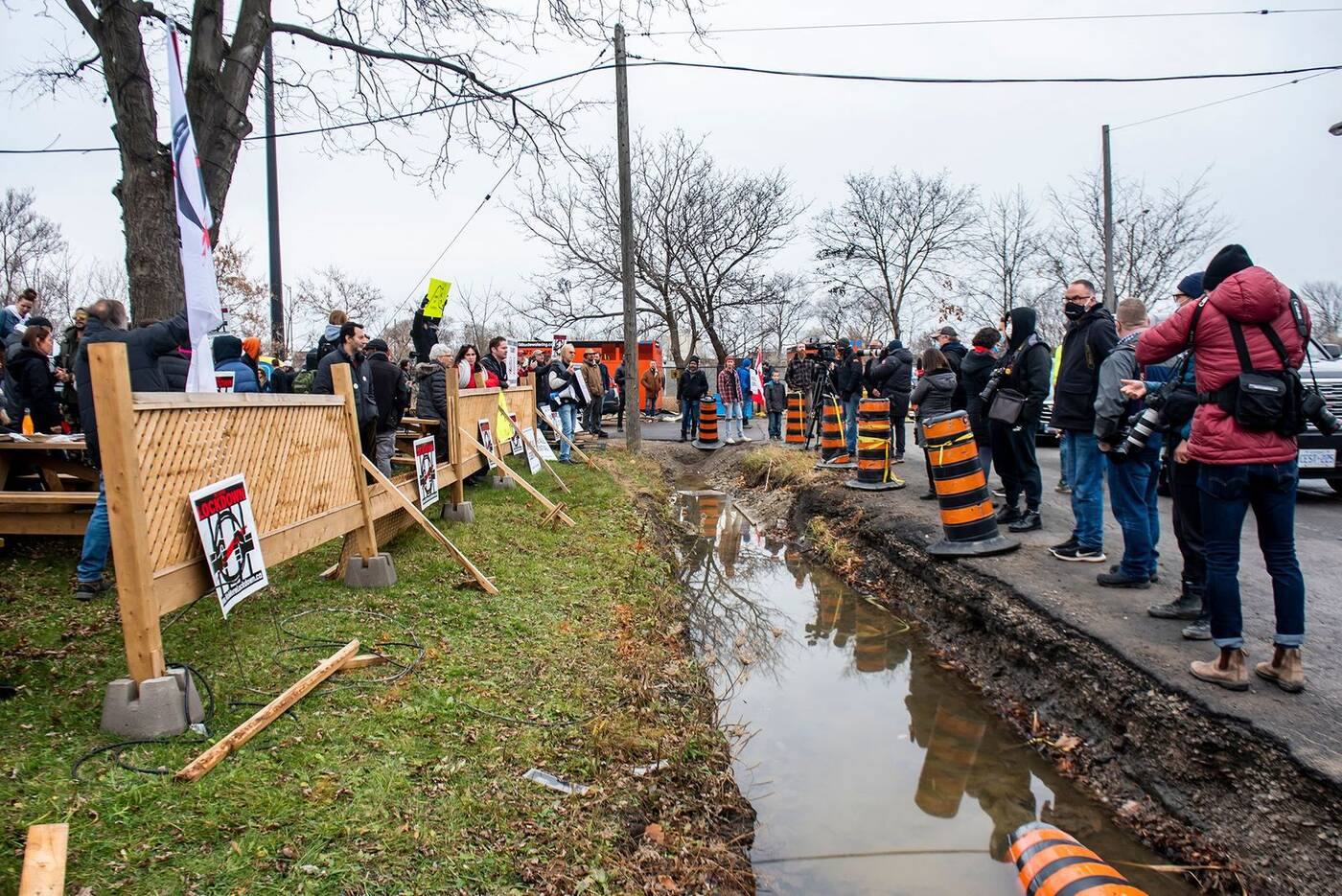 "We came to a place of common understanding where he would close down the business and he and his staff would leave the business," said Sinopoli, calling this "the best outcome from a public safety perspective."

"At the end of the day, this is a public health crisis, the fact that there were so many people gathered in one location particularly without facial coverings were of great concern to us," he said of the protesters supporting Adamson Barbecue's defiance of grey zone lockdown rules.

"We are in a position to stop him if he opens tomorrow, the next day and so forth. The strategy will change day to day depending on what we're faced with." 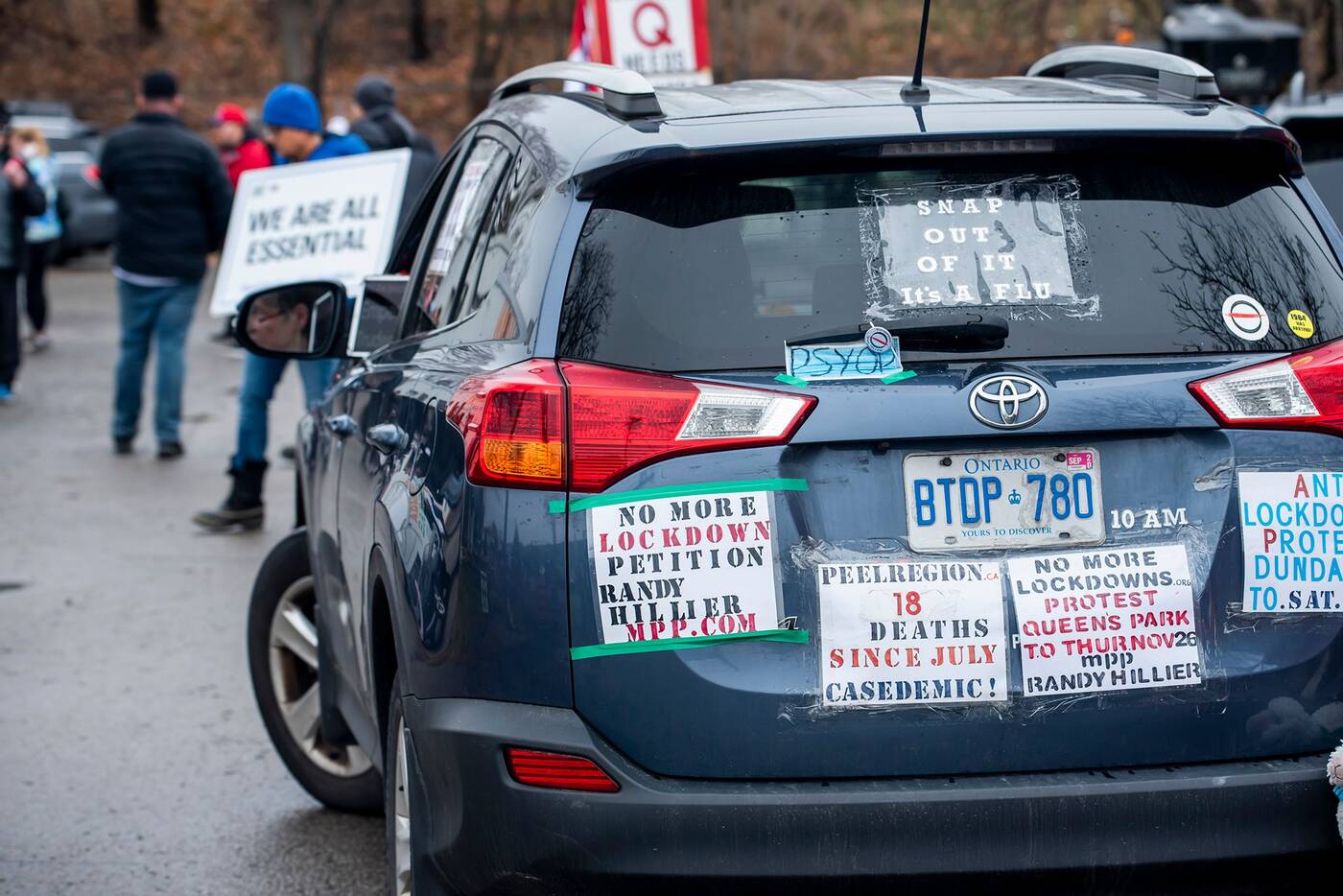 Lockdown protests were aggressive and disrespectful at times.

Officers were operating today under a direction to keep things as passive and peaceful as possible, given the size and sentiment of the crowd (no members of which were arrested, for the record.)

While the anti-lockdown mobs were visibly aggressive and disrespectful to media and law enforcement, Sinopoli said that Skelly himself was "calm, very cordial, very respectful of the process."

The controversial business owner, who has two other locations of Adamson BBQ in Toronto and Aurora, is scheduled to appear in court on March 19, 2021. 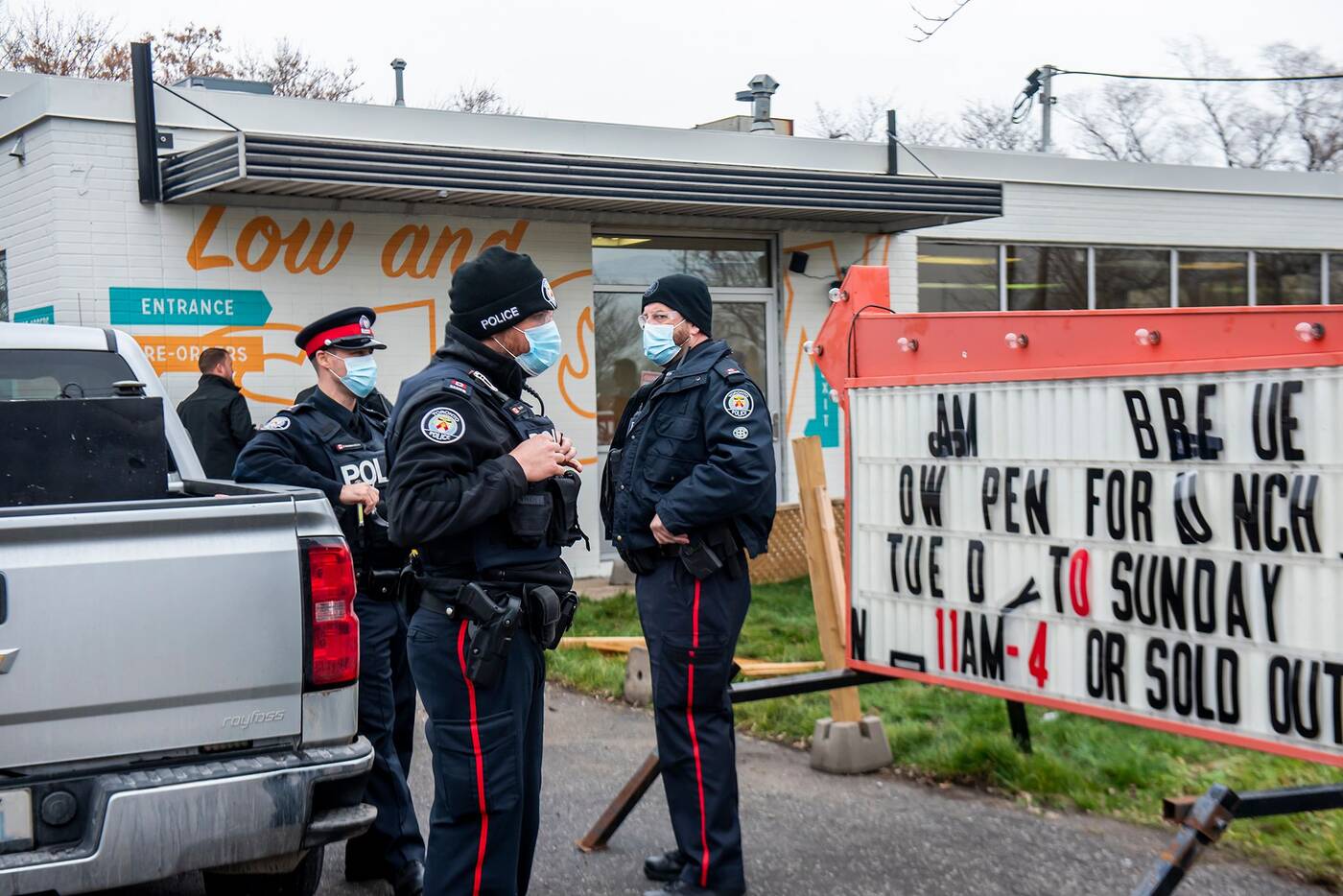 The maximum penalty upon conviction for violating the Reopening Ontario Act is up to $100,000.

Any fines the business is ordered to pay will be set by a judge, according to police, and they could be quite hefty: One indoor dining violation charge alone can see individuals fined up to $10,000 and corporations fined up to $100,000.

Failure to comply with Toronto Public Health rules a class order pursuant to Section 22 of Ontario's Health Protection and Promotion Act can also net businesses fines of up to $25,000 per day.

The maximum penalty upon conviction for violating the Reopening Ontario Act is up to $100,000 for individuals plus a term of imprisonment of up to one year. 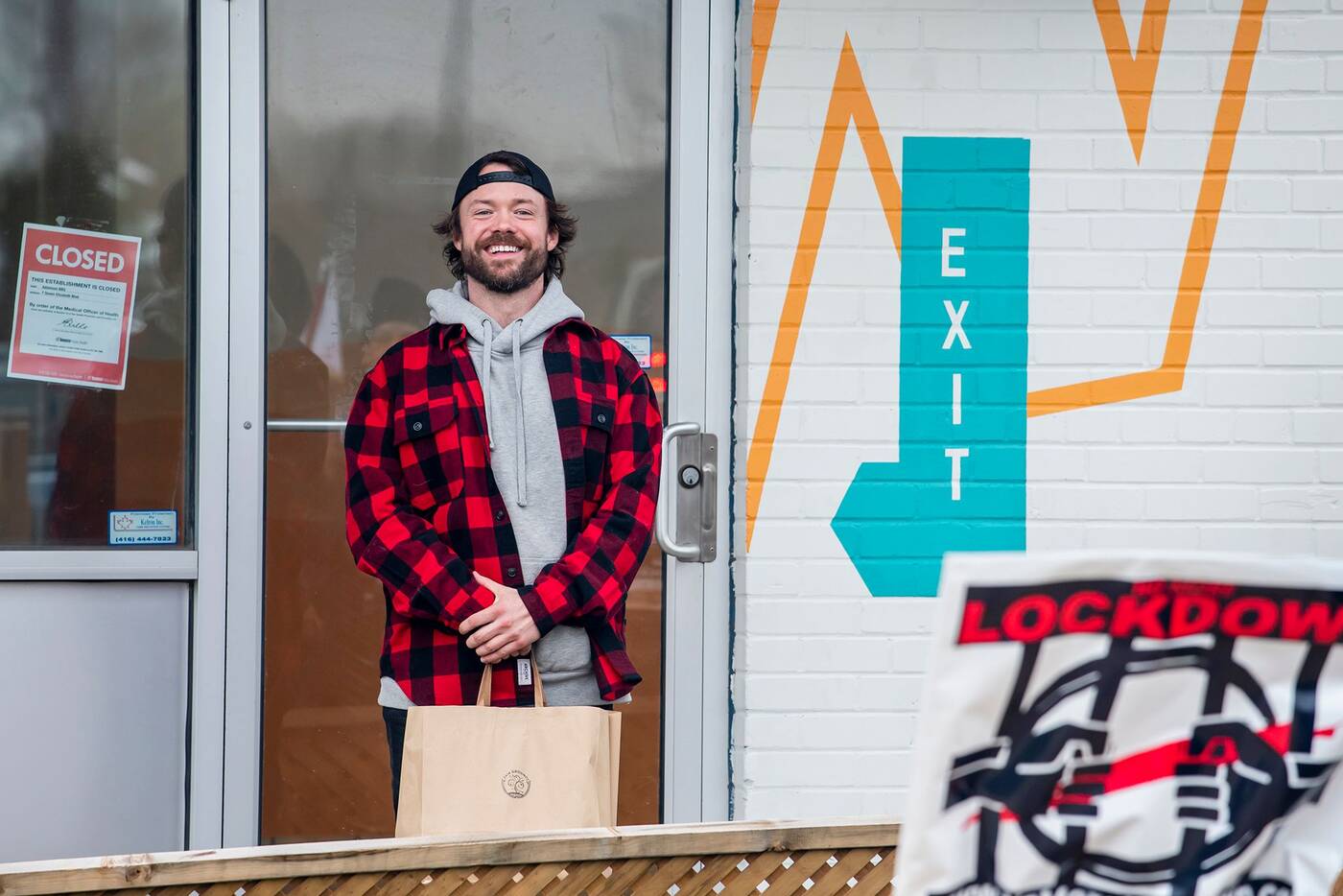 Adamson Barbecue vows to reopen tomorrow despite the charges.

Skelly and his crew shut down the restaurant today and cleared out peacefully after all of their food was sold out, but have vowed to reopen again tomorrow at 11 a.m.

Police admitted that there's no way to stop the business from opening up, but that they will be on hand to deal with any potential violations.

"At the end of the day, our job is to enforce the laws," said Sinopoli. "And thats what we intend on doing, today and tomorrow."