Chinese food delivery apps have proliferated in Toronto over the last few years. Bringing the burgeoning number of Chinese chains in the city straight to your door, these apps cater largely to Cantonese- and Mandarin-speakers, offering options that you won't find on other Toronto delivery apps like UberEats or Foodora.

It doesn't stop at takeout, either: most of these apps will help buy your groceries and household items too. Just scout the windows and menus of your favourite Chinese spots in Chinatown, Markham, Richmond Hill and Scarborough for these fun app logos.

Here's a roundup of Chinese food delivery apps in Toronto.

If you don't read or speak Chinese, you'll have a hard time maneuvering this app. That being said, what better way to incentivize learning a new language than through food?

This Toronto-based app, loosely translated to "lazy order," deals exclusively in delivering food from a slew of Chinese restaurants (and some other Asian restaurants serving eats like pho and sushi) located around the GTA.

It also has a grocery and shopping component, allowing you to browse a pretty huge selection from Seasons Foodmart, in case you need some fruit or an electric kettle. If you're in the mood to buy some wide-legged culottes from an online store called Moon Blvd, they offer that too.

Based in Markham, this food app lists more than 100 Chinese restaurants in the GTA. Created by a group of international students, it's now the largest Chinese online food platform in Ontario and is hugely popular among students in Windsor and Waterloo.

The "Little Red Car Takeaway" brand boasts thousands of users and more than 2,000 orders a day. There are a few different ways to order: through the app or through Food Hwy's WeChat page.

The best part is that restaurant options aren't based on proximity. You can order from all over the city — you'll just be charged extra per kilometre. 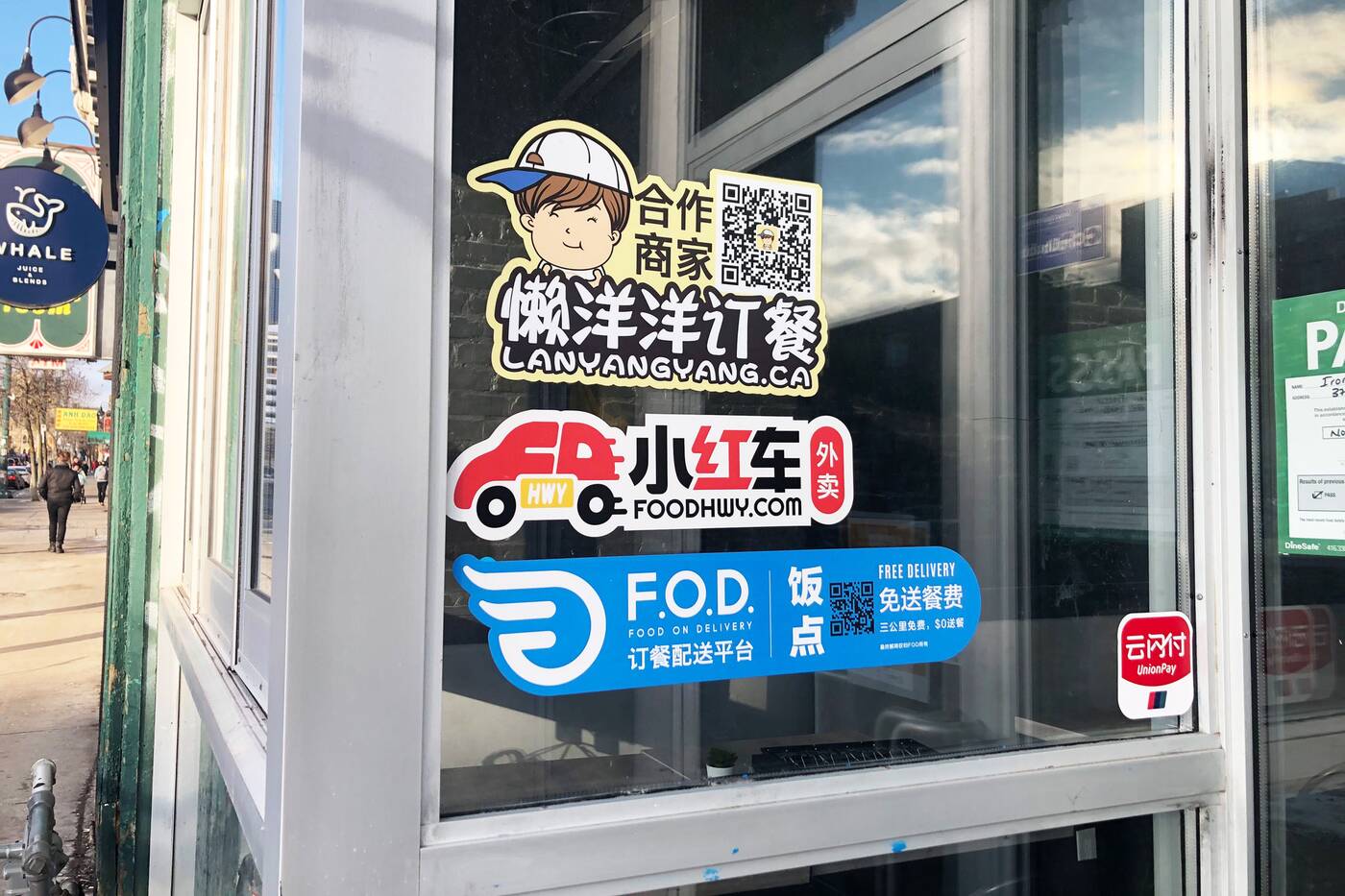 Many Chinese delivery food apps offer restaurants that can't be found on apps like UberEats.

Better known as F.O.D., this app has a presence across Canada and the United States, making it one of the larger delivery services for Chinese food, and also my favourite.

First of all, you can toggle between English and Chinese functions, which is great for everyone.

Easy to manoeuvre, the app offers free delivery within 3 kilomtres of your location. It also has a section dedicated to daily sales, with discounts of up to 50 per cent from restaurants like Blackball Dessert and Hotopia.

But it's not just takeout: the F.O.D. actually has its own virtual liquor store, delivering everything from bottles of red to Hennessy between 11 a.m. and 10:30 p.m. daily.

They also offer groceries from their own shop between 11 a.m. and 5 p.m., with a huge and convenient stock of goods like Burnbrae eggs, Visine, Dawn dish soap, halal chicken strips — you name it.

First founded in Vancouver in 2014, the brand's motto is "making overseas Chinese people's life easier," which is essentially code for making sure international students stay adequately fed off of all the Chinese restaurants and bubble tea shops Toronto has to offer.

While the app's website offers English translations, the app will be totally useless for you unless you read Chinese. If you do, prepare to unveil an entire world of bubble tea shops you didn't even know existed.

Kind of like Foodora, orders come in easily recognizable with its onigiri logo and aqua blue bags which are specially incubated to make sure your food stays warm. The app also has an online mart offering some groceries and household goods.

This delivery brand with the cute cat logo that started off as Chanmao is based out of Richmond Hill.

What started off as a three-driver mobile app in 2013 has expanded into a huge service that's partnered with some of the biggest names in the Asian cuisine game, like Coco and Mabu Generation.