The act of leaving one's apartment to procure essential goods is growing more and more painful for the people of Toronto as winter settles in, bringing with it brutally cold weather, long, dark nights, and a heck-ton of new streaming content to binge.

Online food delivery services have made it all the more difficult to go outside in recent years — because why trek to a restaurant when a restaurant will trek to you?

Foodora, one of the major players in this game, is now enabling our laziness even further with the addition of a "shops" feature to its platform, letting people in Toronto (and only Toronto) order wine, beer, booze, grocery, health, convenience, pet and home goods for delivery in less than an hour.

Starting today, customers can order from more than 60 new vendors through the Foodora app and website, including Reid's (gin) Distillery, the Wine Rack, Amsterdam Brewhouse, Bellwoods Brewery and 10 other local beer makers. 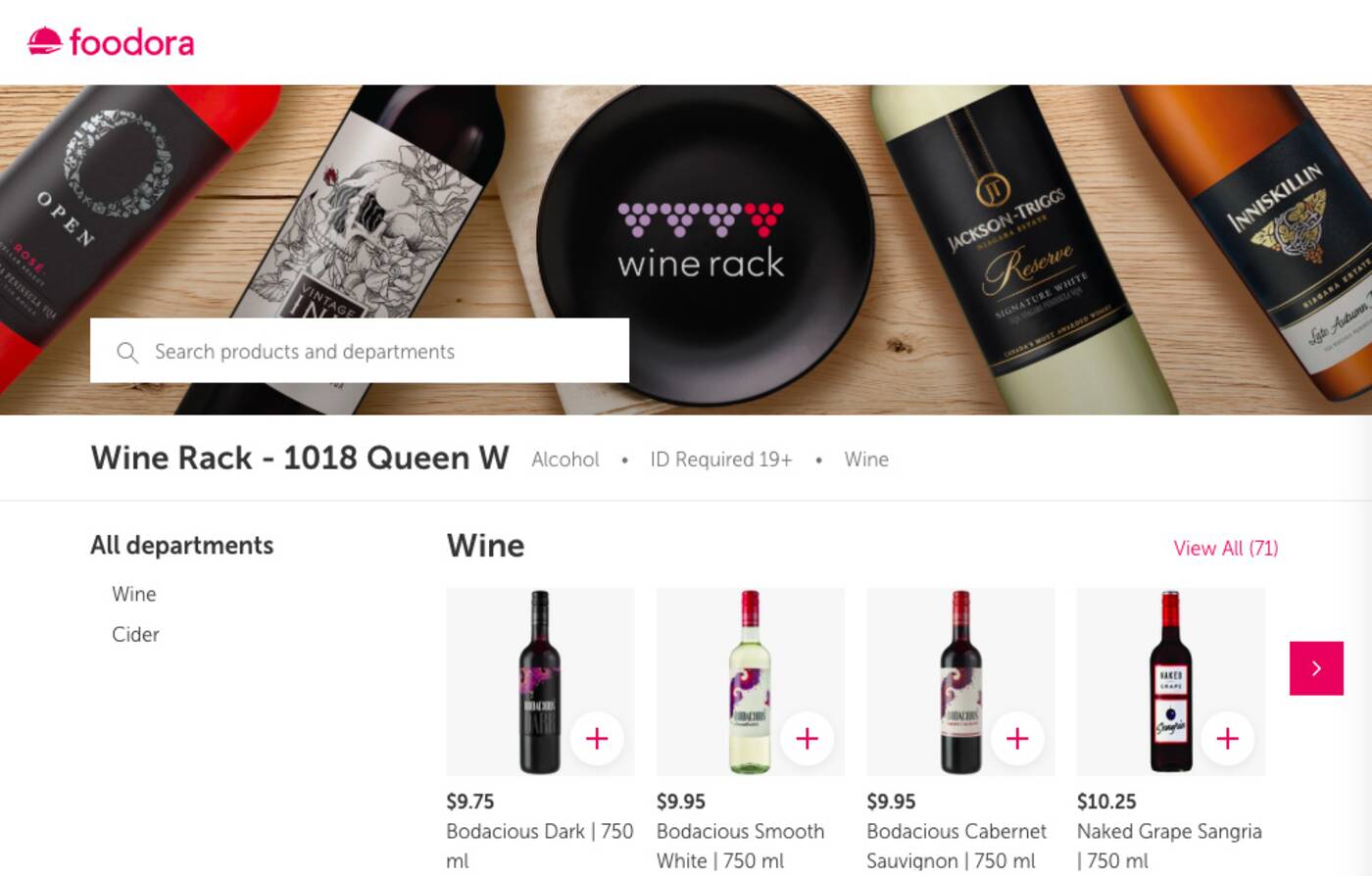 This, in addition to the LCBO, which launched on the platform in September.

"When we heard Foodora was an option for delivering our beer, we immediately got on board," said Joey Seaman of Bellwoods Brewery in a release announcing the shops feature.

"This is definitely the most convenient way of getting our beer into the fridges of our local Toronto customers that can't easily make it to our Bellwoods Brewery bottle shops." 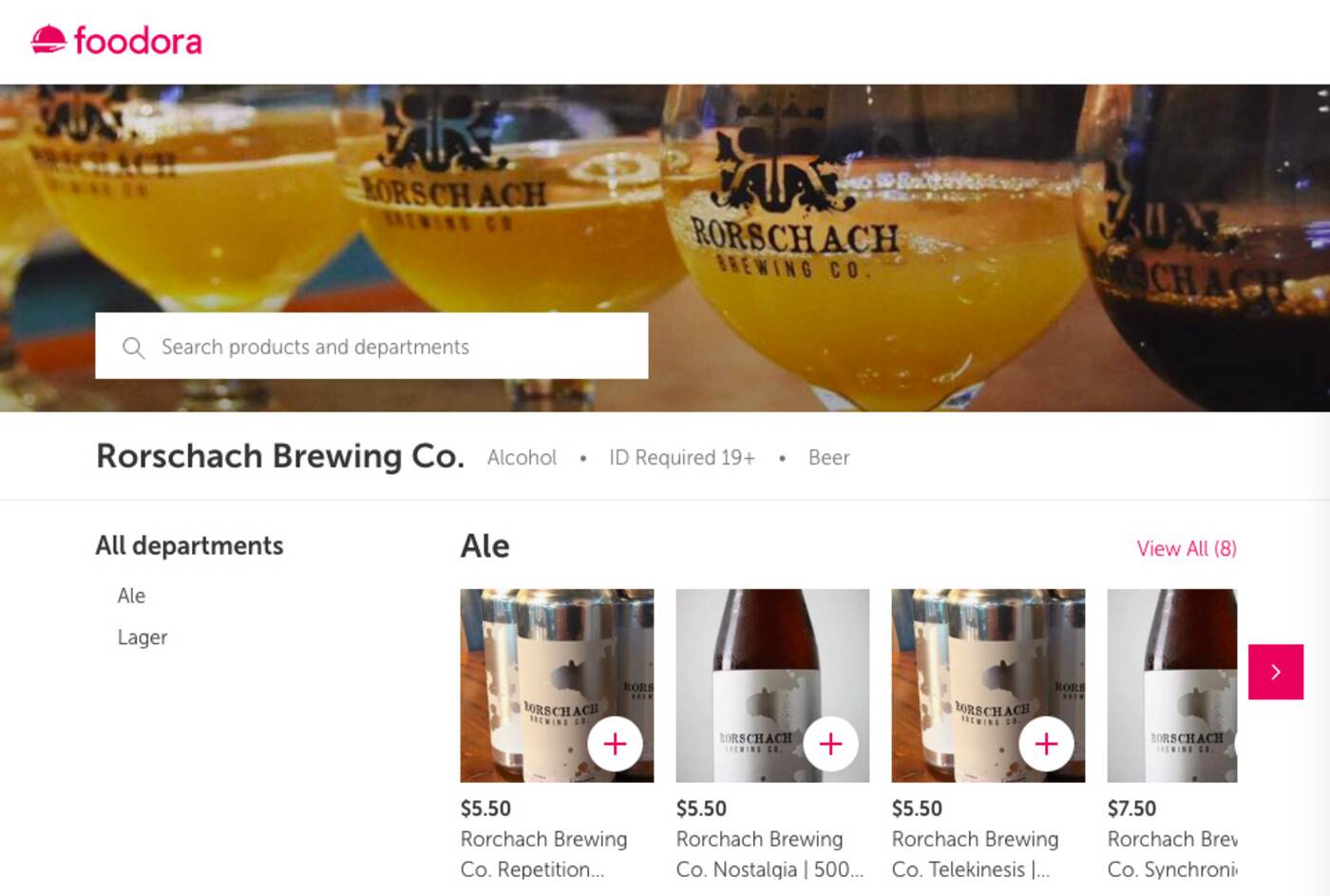 Rorschach is one of 12 local breweries that now deliver to peoples' homes in Toronto through Foodora. Screenshot of foodora.ca.

Unlike the illegal dial-a-bottle services people once relied on to deliver booze to their pads after hours, Foodora partners off their products at a normal market rate (read: you don't need to spend $100 on 26 ounces of vodka).

You will have to pay a delivery fee, however, which varies based on where you live, and you can't get alcohol delivered to your door at 4  a.m.

"All Foodora riders that are delivering from alcohol vendors in Toronto are Smart Serve-certified to responsibly deliver alcohol to customers ages 19 and over," reads a release from the company.

"If the recipient fails to produce valid ID, appears to be intoxicated, or attempts to purchase for a minor or impaired individual, the delivery will be cancelled, and a $20 restocking fee will be applied." 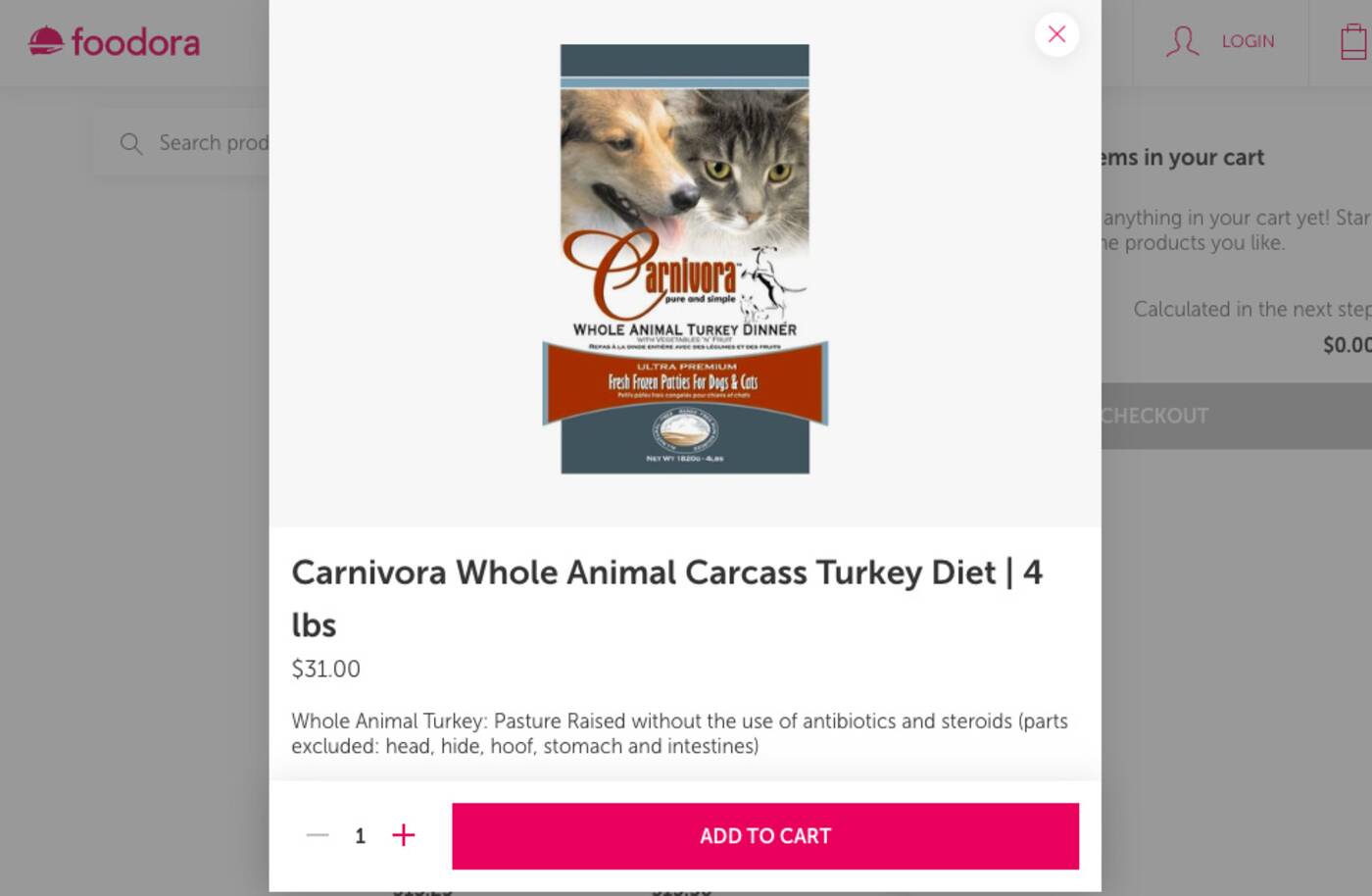 Toronto's Barkside Bistro will deliver hundreds of different pet items to your home when it's too cold outside to comfortably restock Fido's food dish. Screenshot of foodora.ca.

For those who have no interest in booze,  Foodora Shops also opens up the possibility of having things like pet food, flowers and fresh coffee delivered.

The feature is only available in Toronto for now, but Foodora says it plans to roll "shops" out to other "select" Canadian markets in 2020.

"There are also plans in motion for several major Canadian retailers to launch on the platform over the next few months," says the food delivery giant.

For anything that can't be found at one of the local shops included in the new, Toronto-specific service, Foodora also delivers almost anything from 7-Eleven... so, see y'all around next spring, I guess.