Today in ridiculously expensive Uber rides, a Toronto chef is out thousands of dollars after leaving his professional tools in a car for just seconds.

Dylan Vickers, a chef at Skippa on Harbord St., says he forgot to grab his knife set while exiting an Uber he'd taken to work last Thursday.

He realized what had happened immediately and tried to wave the driver down, but the vehicle was already in motion. So, Vickers sent a message to the driver letting him know that his tools were in the car.

A few hours later, Uber sent back a message to say that his items had been retrieved and that he could pick them up at the ride-sharing company's office in Mississauga, which he set out to do the next morning.

When the chef got there, however, he was told that his knives had been classified as "dangerous" and that they'd been discarded of.

"They were deemed unsafe to be reissued to me," he said by phone. "The woman I was talking to said she wasn't able to contact the person who would have thrown them out directly."

"She said that my knives were likely somewhere within the municipal garbage system by that point." 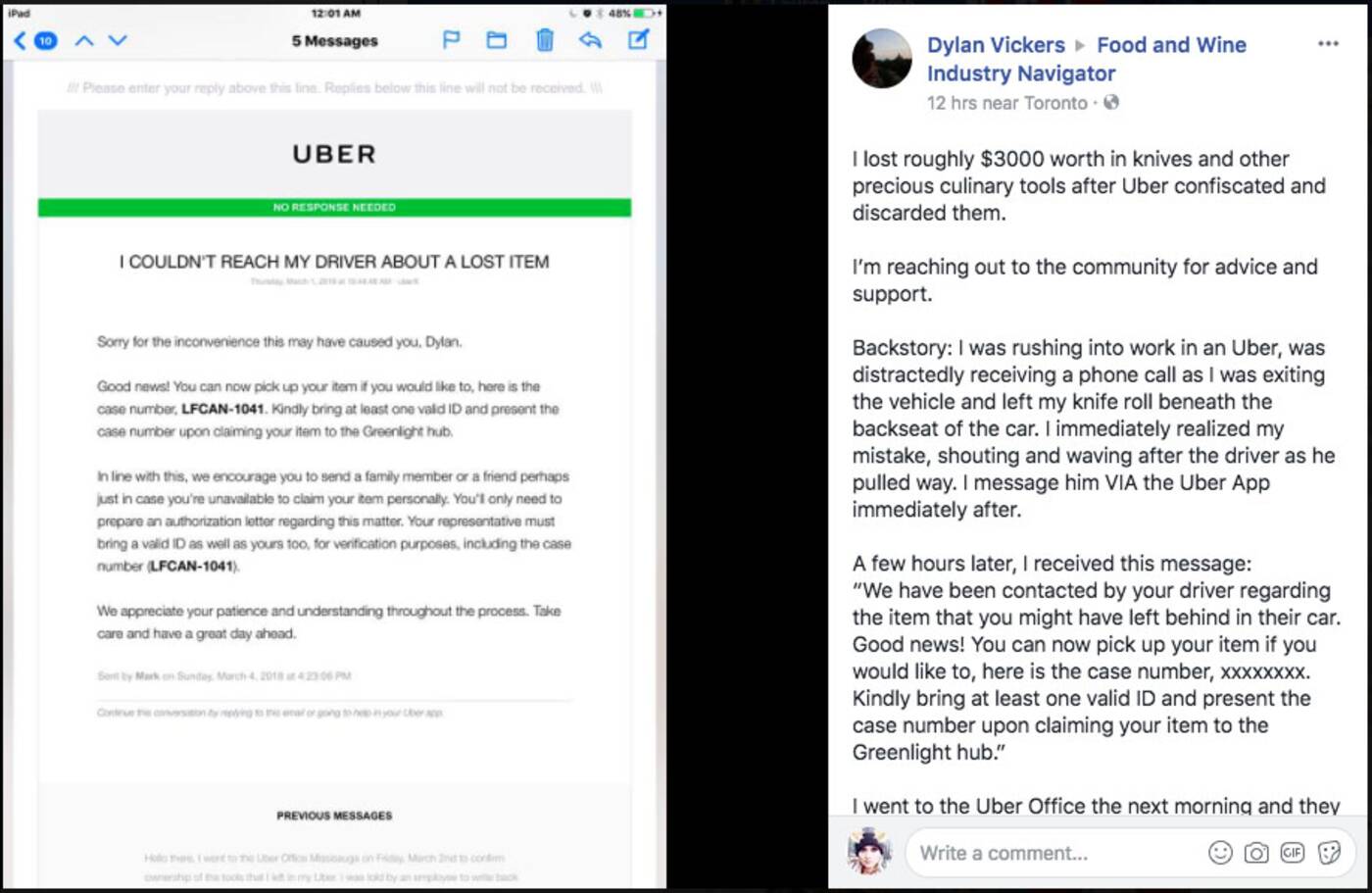 A Toronto chef's plea advice on what to do about Uber discarding his tools has racked up dozens of comments and shares in just a few hours.

Vickers asked for some type of compensation, but says that he couldn't even get the company to acknowledge it had done anything wrong.

"Uber won’t give me anything more than 'it's our policy that we don’t release weapons back to customers, we can't give you a written statement'," he wrote on the Food and Wine Navigator Facebook page last night in a last-ditch effort to recover his losses.

"Am I sh-t out of luck or is there anything I can do?"

With little hope that he'll get his original tools back, Vickers has now reordered a new set.

"I need my tools," he said. "They're critical to me being able to apply my trade."

Unfortunately, chef equipment doesn't come cheap. Vickers says that his estimate of $3,000 was conservative. His collection of knives and culinary tools are likely worth much more than that all together.

"I would like some form of compensation," he said by phone. "I haven't even been able to get them to admit that they made a mistake or apologize or anything."

An apology, he says, would be better than nothing – though "compensation would be ideal."