Skip is a modern-yet-rustic sushi and sake joint that replaces The Roxton on Harbord Street just east of Ossington. It's run by a pair of siblings, one of whom trained under sushi chef Mitsuhiro Kaji at Sushi Kaji.

The space seats about 30 people plus another 20 outside on the front patio, which has a limited menu. 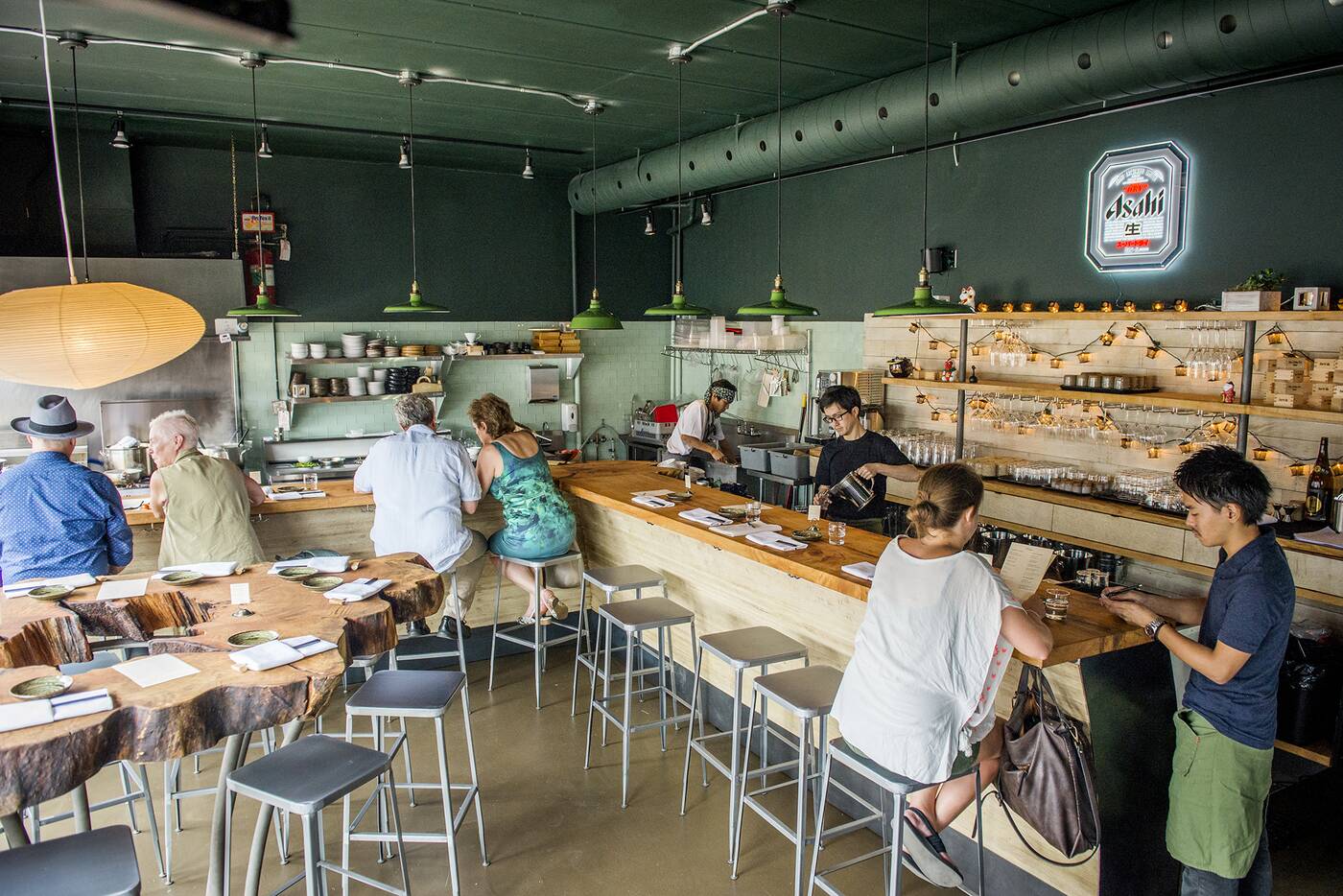 Stools at the L-shaped bar provide close-up views of the action in the open kitchen while a visually arresting custom-made harvest table repurposed from a fallen sugar maple trunk is situated right by the front window. 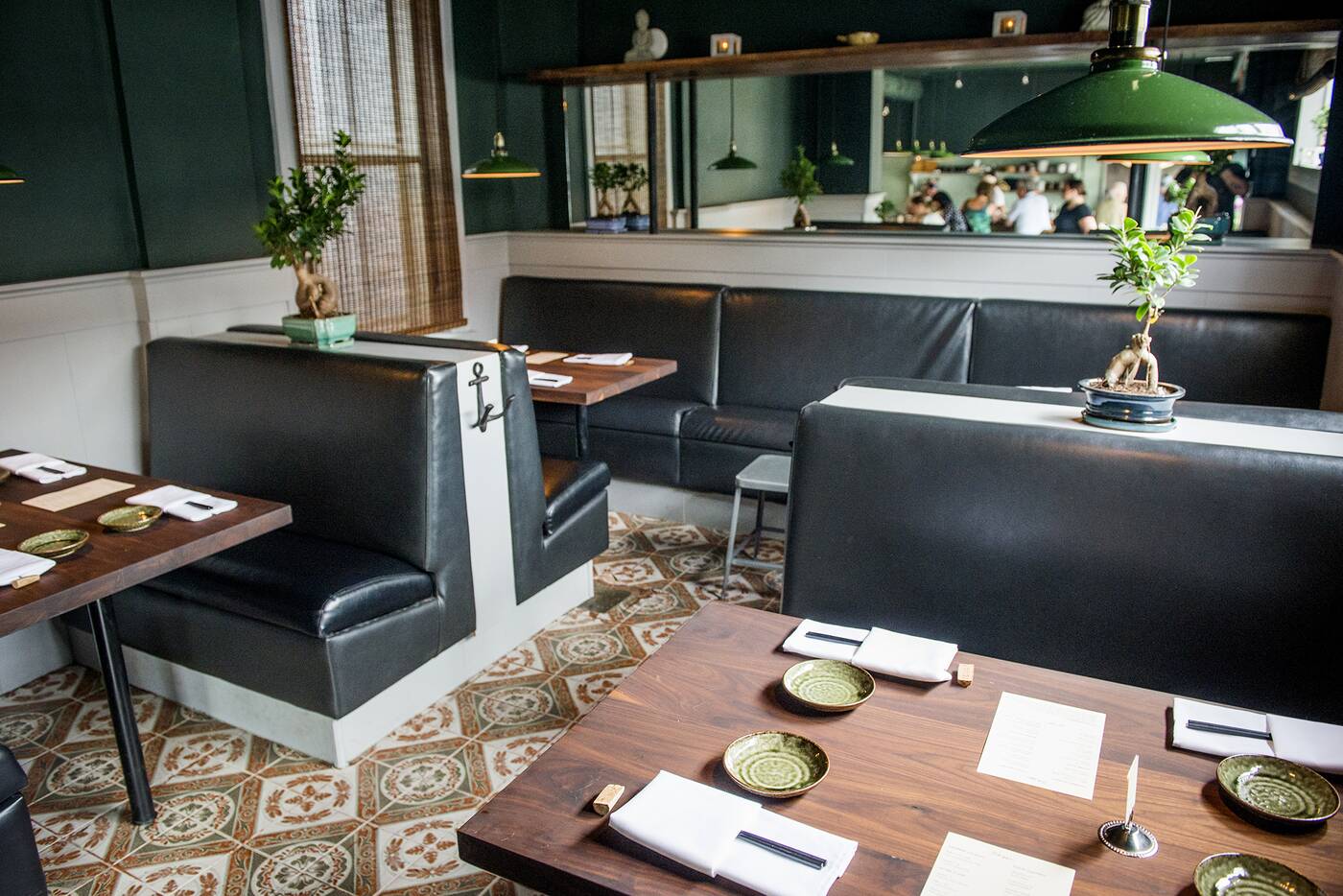 A few booths in a slightly elevated area off to the side round out the seating options. 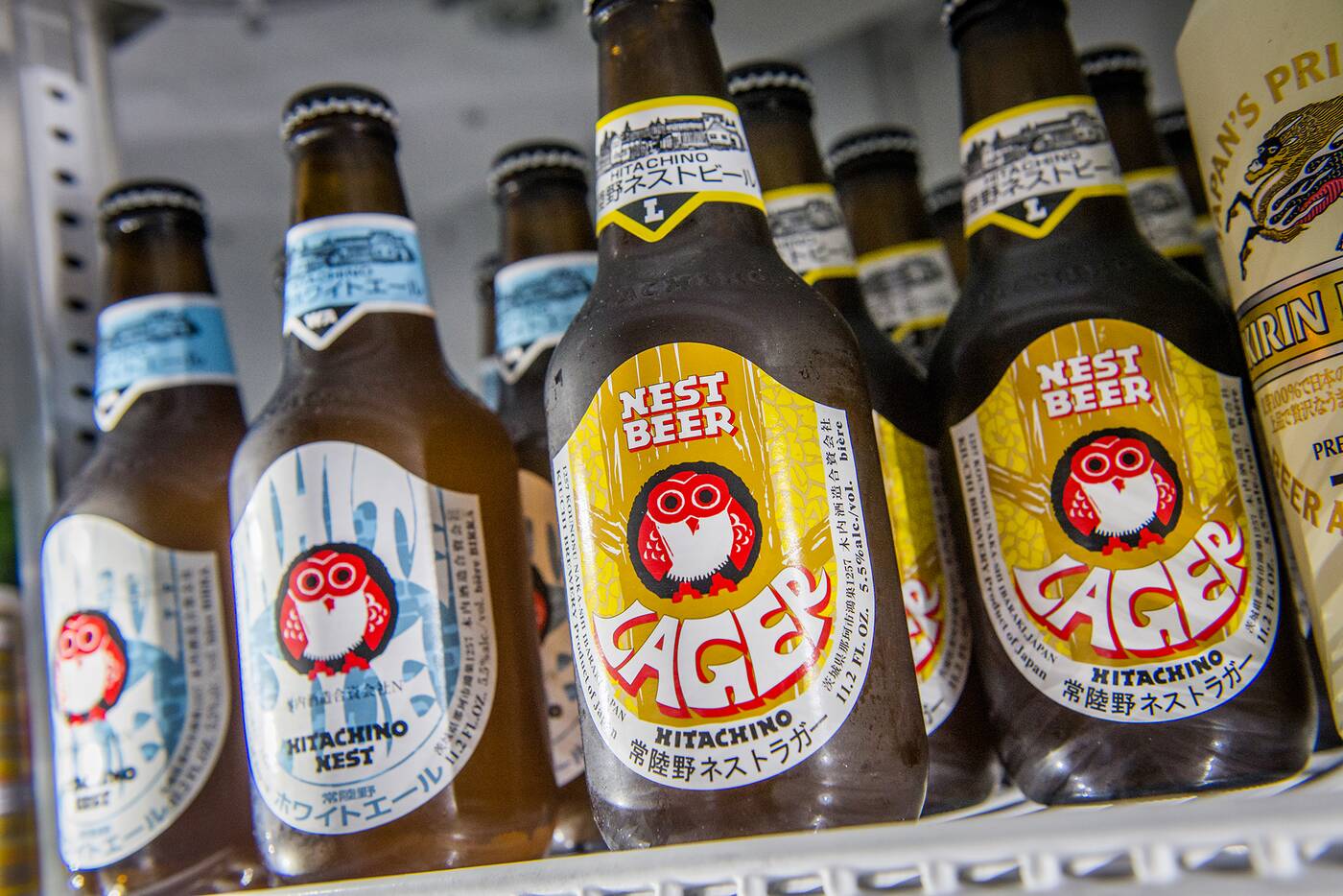 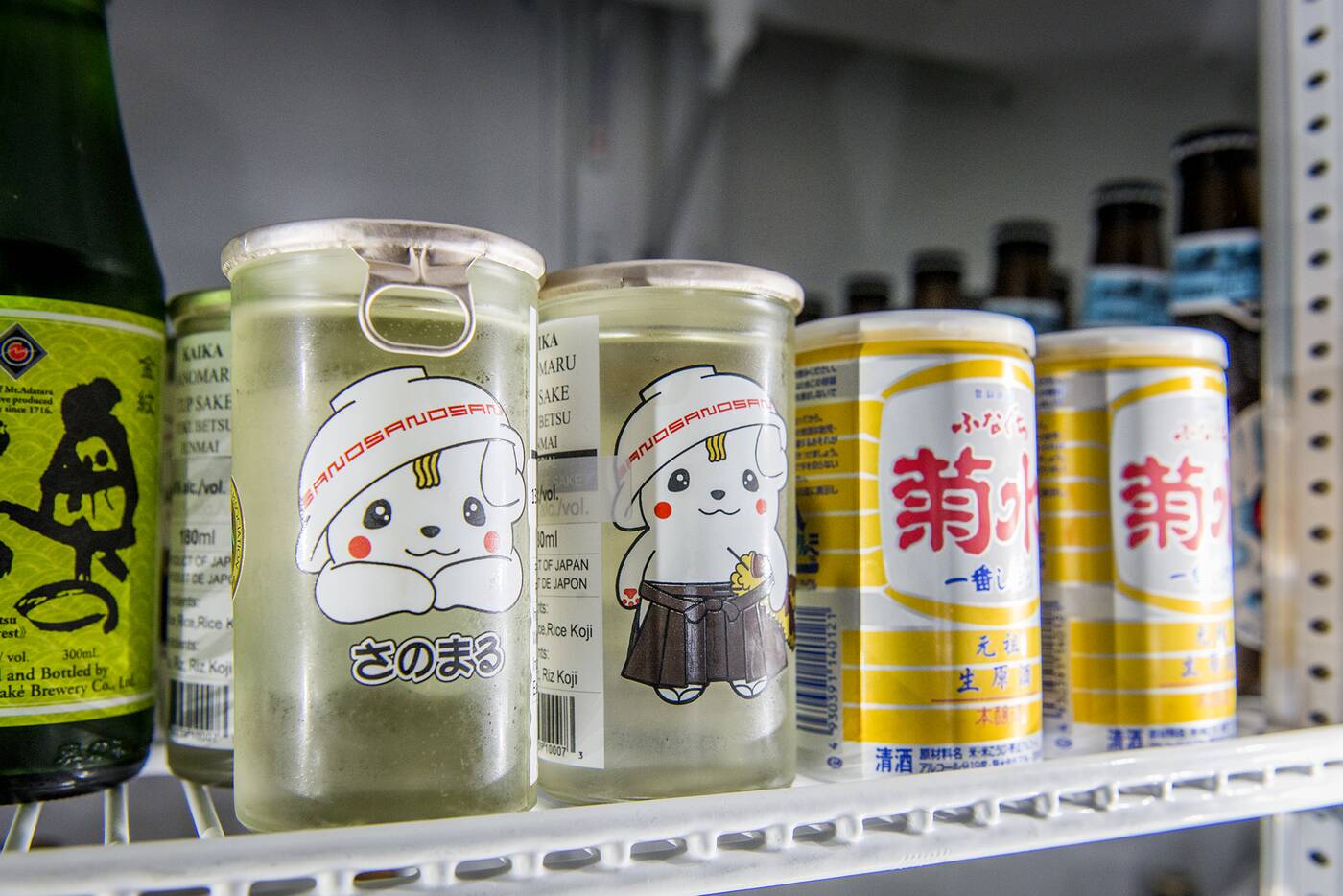 Of course, there is also sake, including super adorable single-serving containers ($21-$23) in addition to larger bottles ($28-$140) meant for sharing. 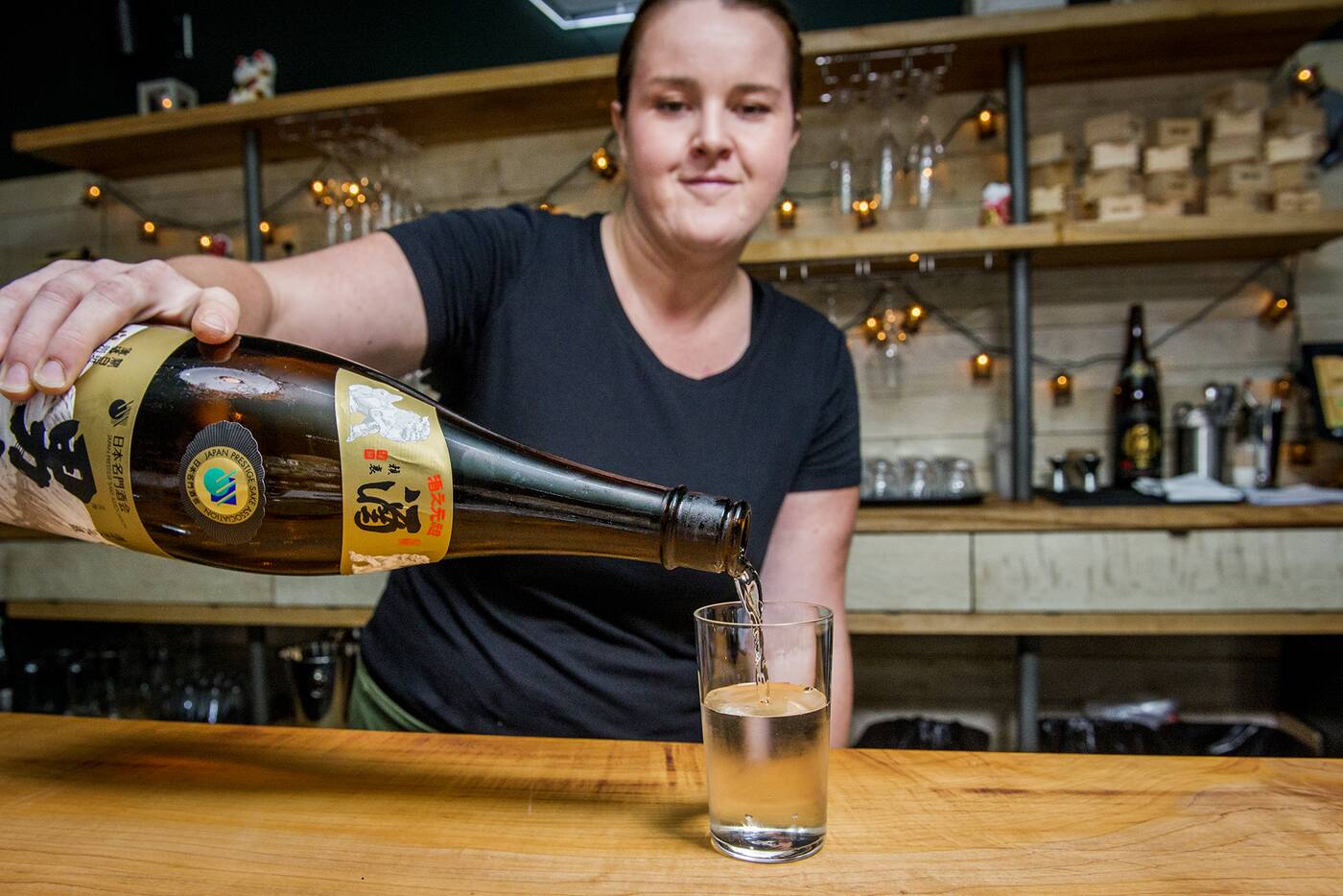 I try a glass of Otokoyama's Tokobetsu Junmai ($15/5oz), which pairs well with sushi and sashimi and comes from Hokkaido. The one word that pops into my head when I taste it is "dry" (in a good way).

The food menu here is short and changes daily. It comprises a few selections of sashimi, sushi and vegetable dishes, plus a handroll. 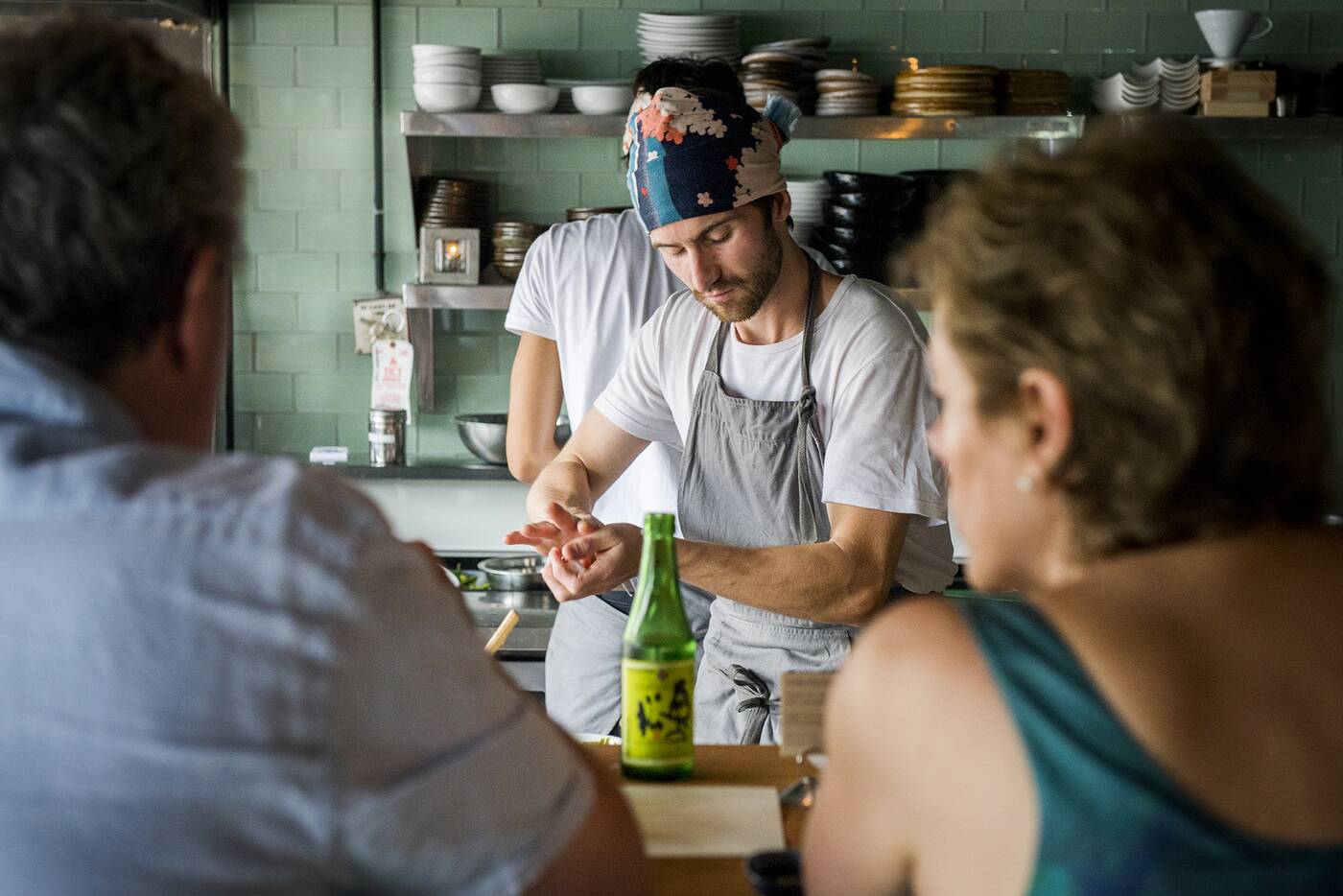 Plates range between $2 and $16, while a reasonably priced omakase that tends to be priced at $50 or less (depending on what's offered) allows one to try the day's handroll and a piece each of all the sushi. 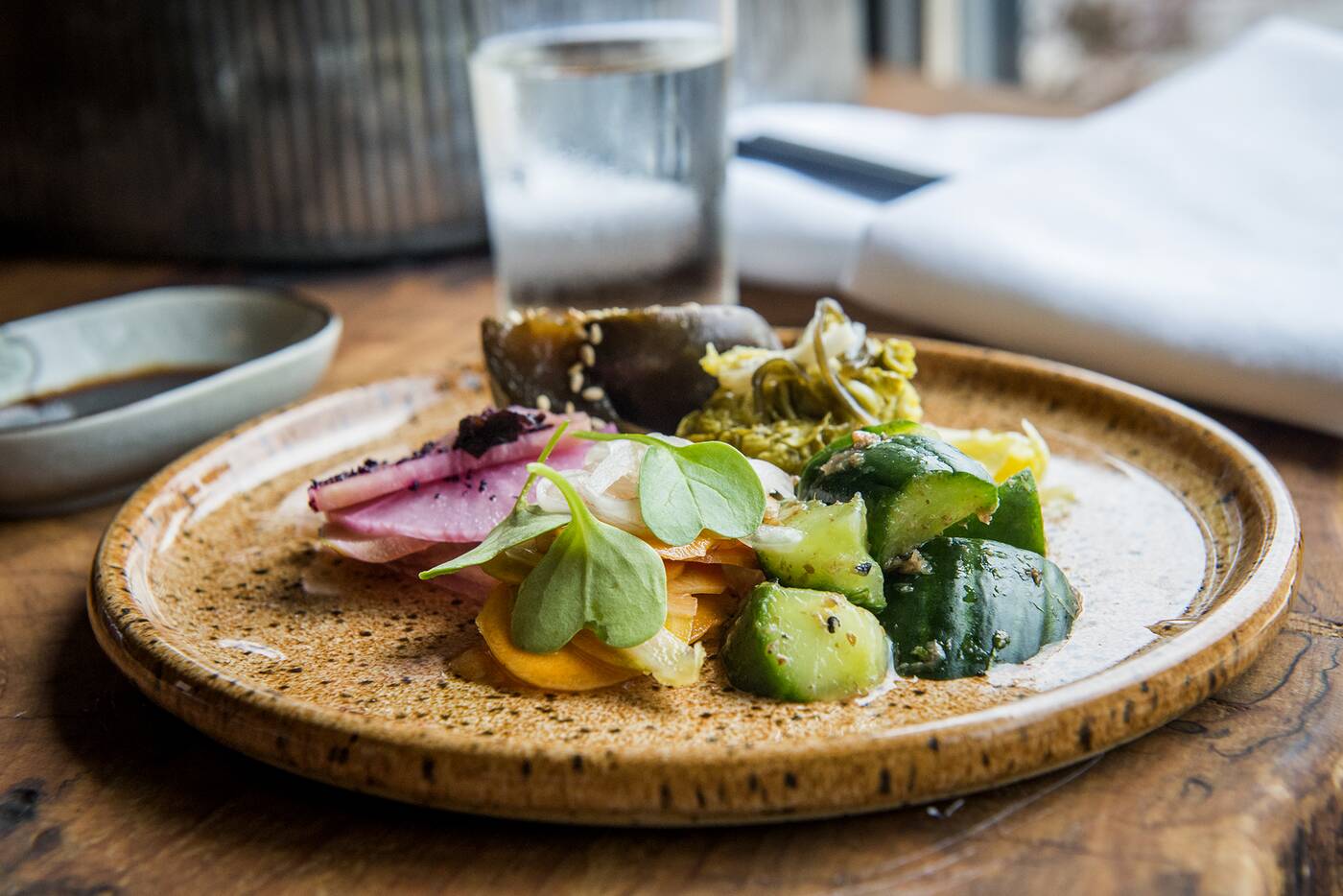 From the yasai, or vegetable, portion of the menu, we start with a pretty plate of tsukemono ($9), or seasonal pickles, all done in house. Each component (carrot, cucumber, napa cabbage, eggplant, daikon) has its own distinct flavour and personality but also combines well with the others.

Produce is sourced from local organic farms like Kuramoto, which is near Leamington and specializes in Japanese vegetables. Sous-chef Dylan Vickers also grows herbs and turnips in Skippa's own organic garden right by the restaurant. 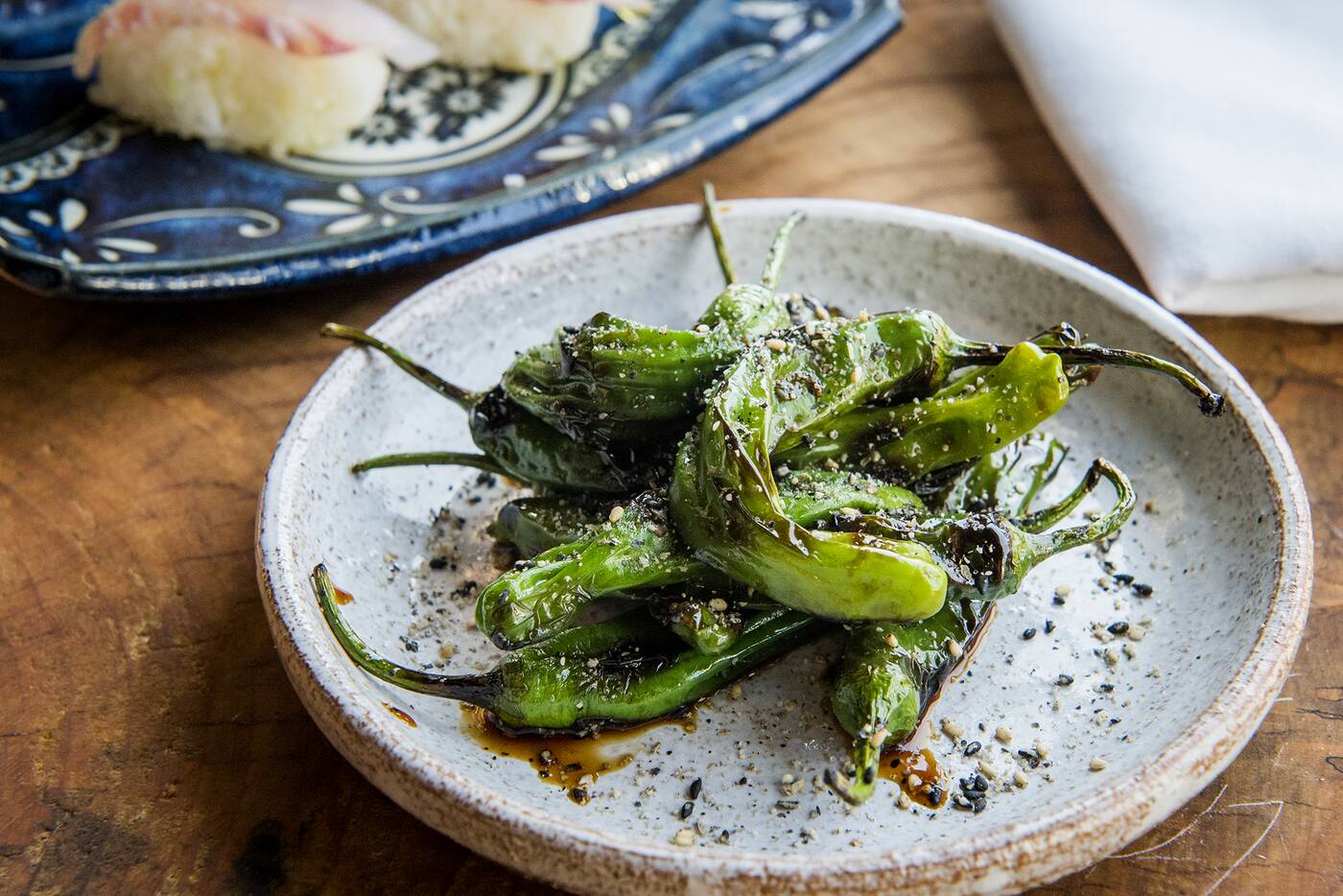 Grilled shishito peppers ($6.50) are dressed with a chicken bone-infused yakitori sauce accompanied by a sprinkling of salted black and white sesame seeds.

They're an addictive mix of sweet, salty and bitter, and it's fun to play a spicy Russian roulette with these peppers – approximately one out of 10 will turn out to be spicy (I manage to hit the jackpot). 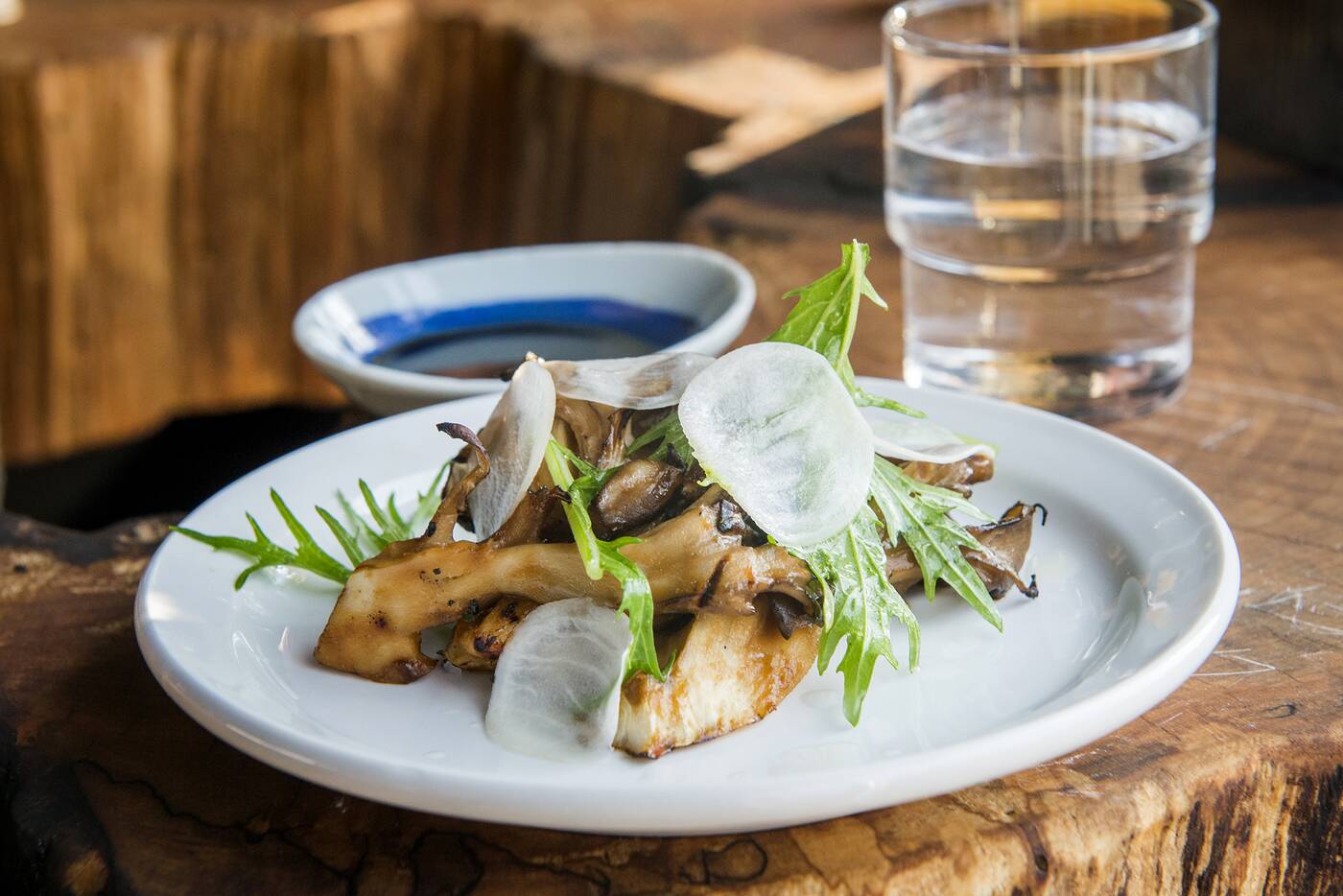 My favourite dish of the night is the maitake salada ($13), featuring big black maitake mushrooms and made-in-house caramelized miso sauce. It's satisfyingly smoky and salty, with a meaty umami, and the greens and radish add a nice bit of crunch and contrast. 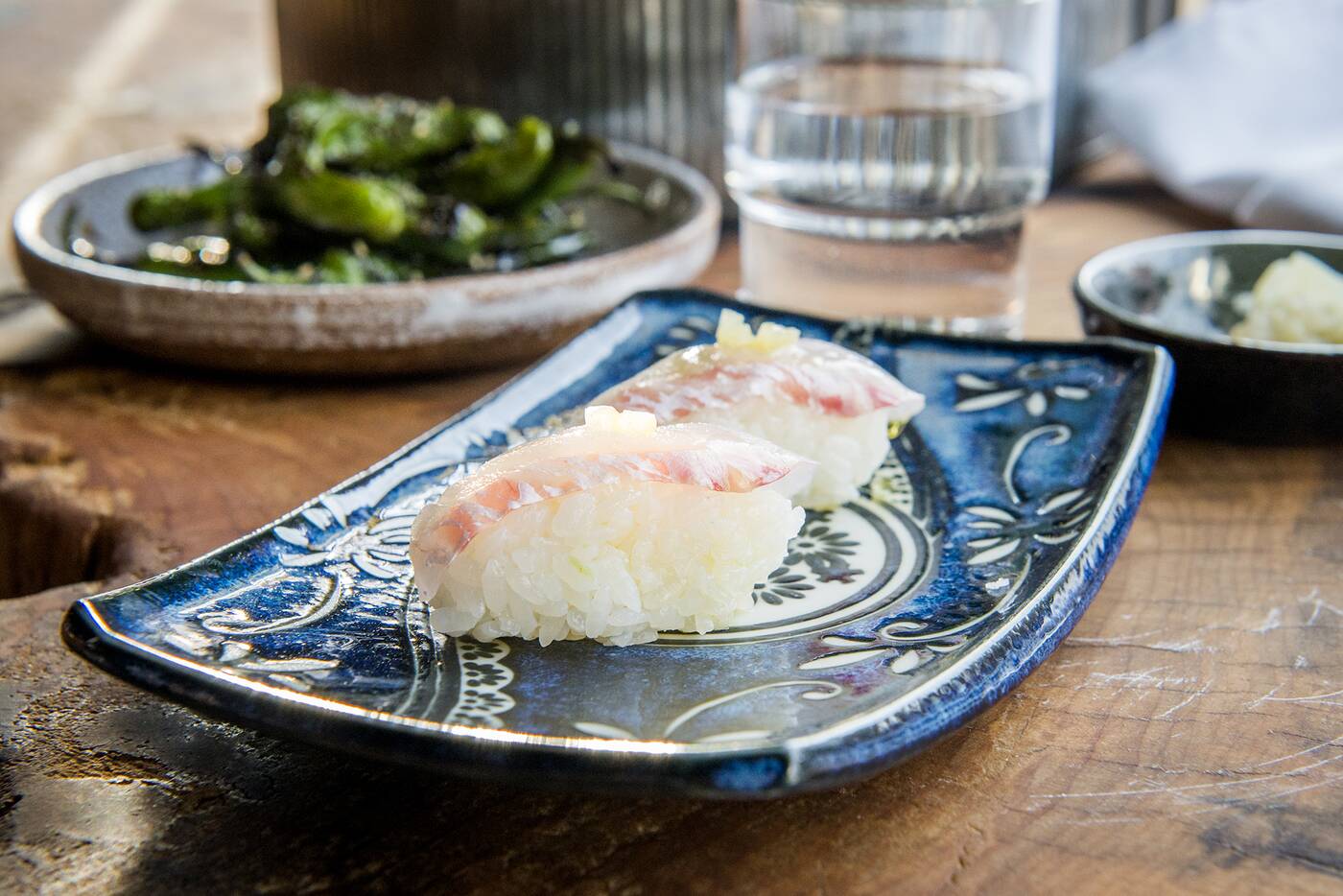 Ocean Wise sustainable fish is served here, and sashimi offerings depend on what's in season. Instructions on the menu encourage diners to eat sushi the traditional way, "with your fingers and in one bite." 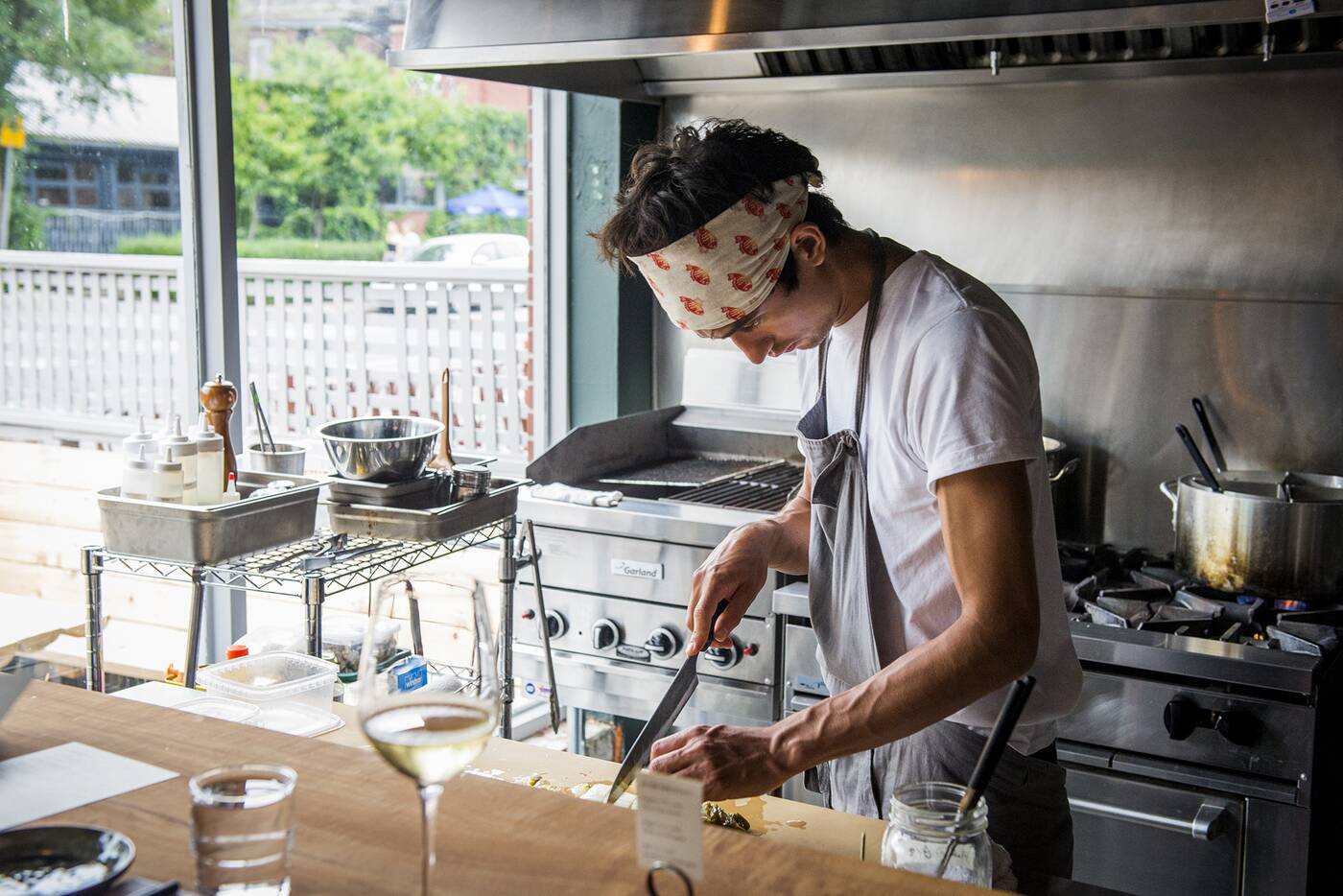 When each piece arrives, the server tells us whether or not it needs to be dipped into the house-blended tamari soy sauce, as some of the sushi is already optimally seasoned.

Madai ($5/piece), sea bream from New Zealand, is garnished with olive oil and preserved lemon. It has such a strong citrus flavour that I sadly don't manage to taste much of the fish. 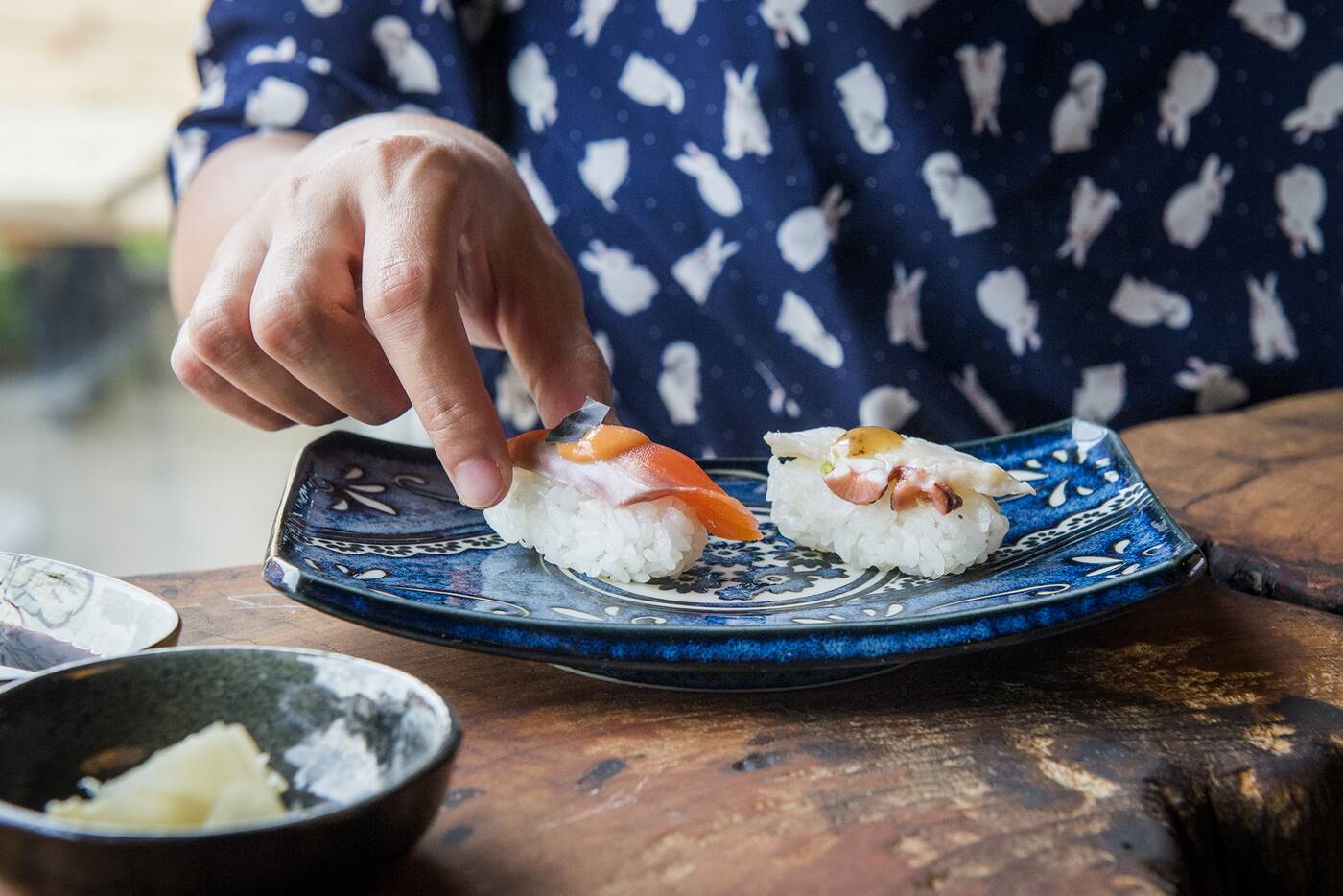 Similarly with the Masu ($4.50), the B.C. ocean trout is slightly overwhelmed by the confit tomato and basil (grown in Skippa's own garden) accompanying it, but it's admittedly still pretty tasty.

Creative garnishes continue with Tako ($4.50), octopus from Morocco topped with a dab of vinegar and mustard – immediately bringing associations of Southern BBQ sauce bases to mind. It provides some zing to the piece and keeps my tastebuds on my toes. 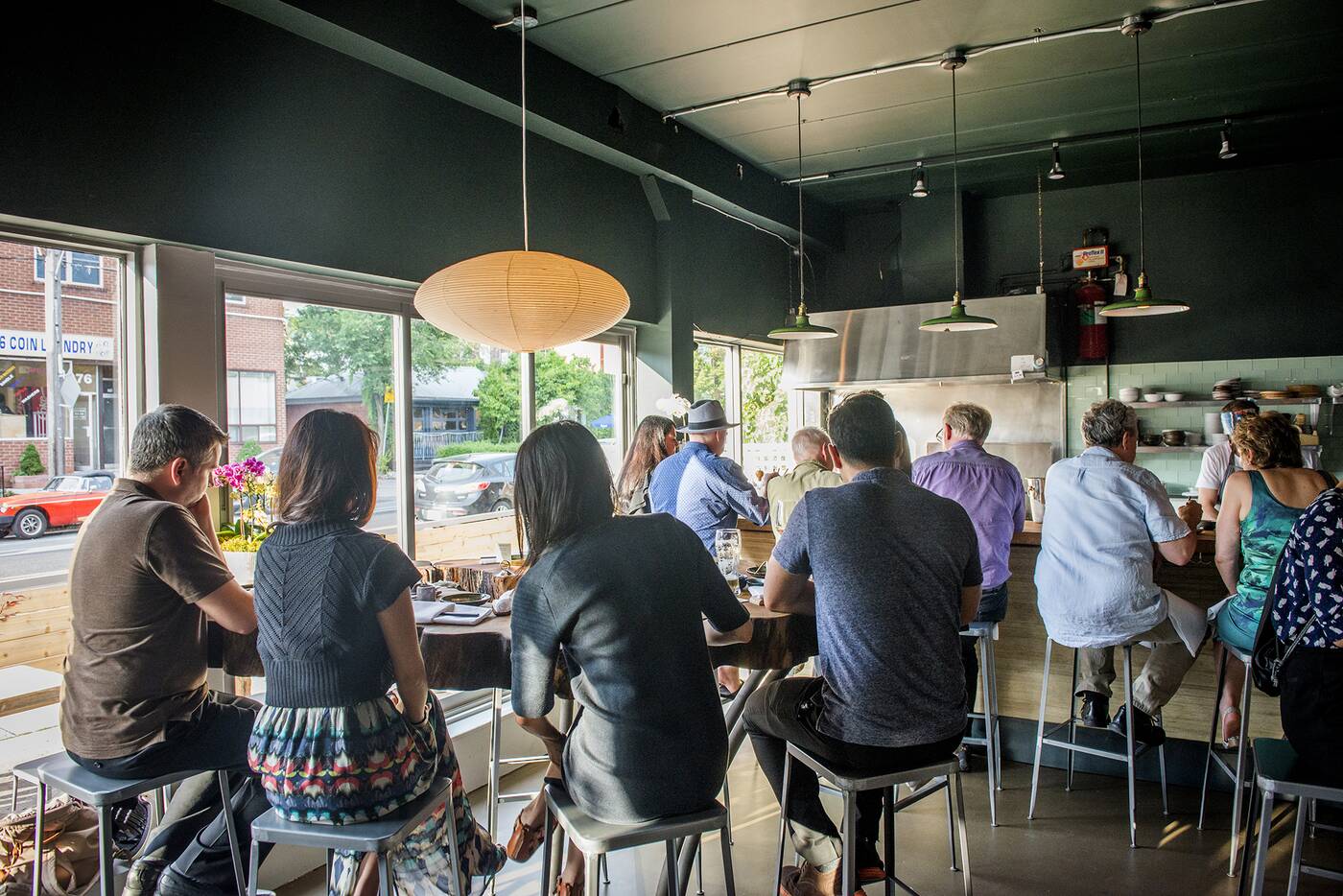 This is a lovely addition to the neighbourhood and it'll be interesting to see how the menu offerings evolve over time. 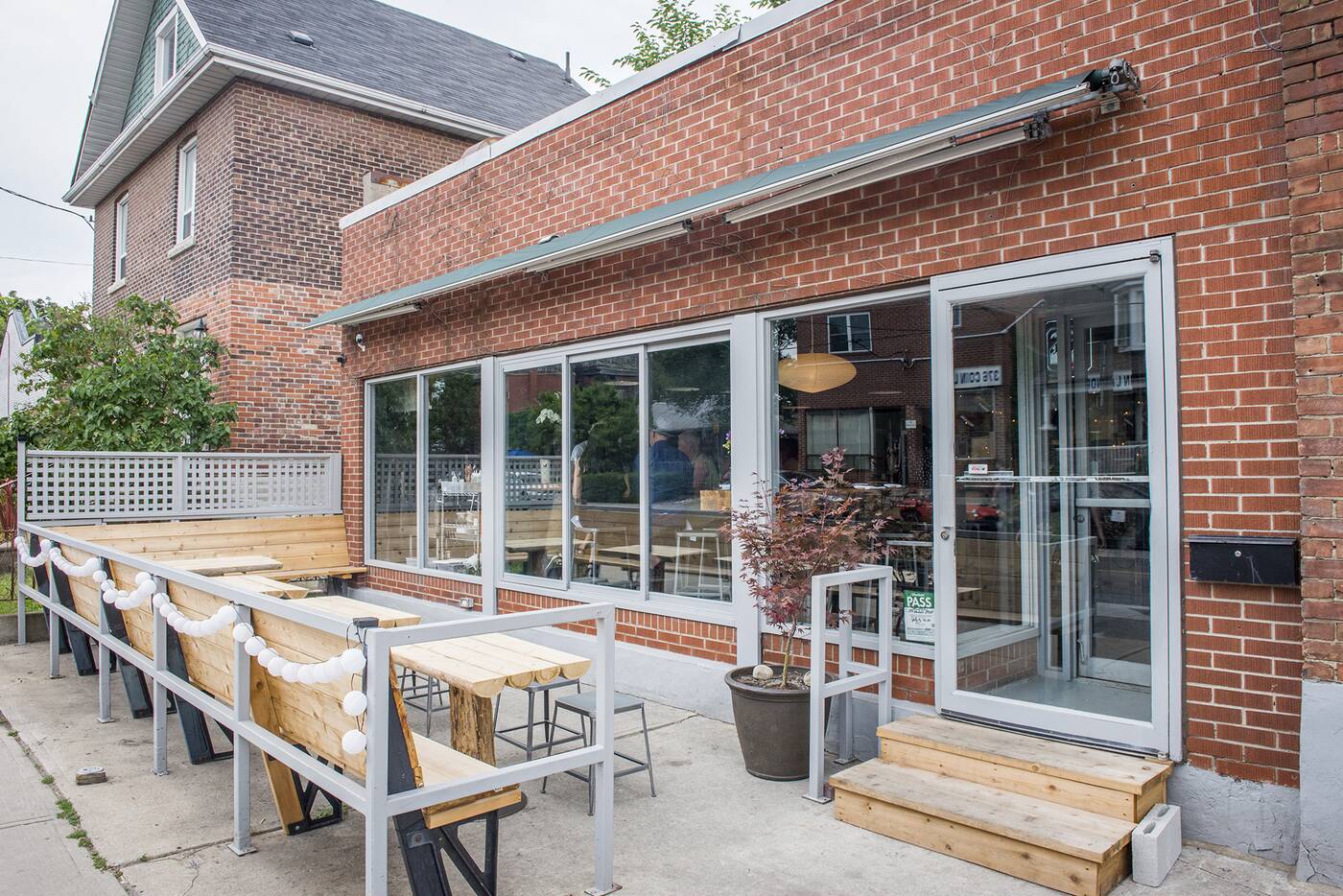