I had really high hopes for this place. I really did. Walking into In Japan was a cool experience. It's nothing like the run of the mill cafeteria style lunch places along the Atlantic Avenue strip. It's cozy, it's stylish, it's Japanese. Judging by the amount of people waiting in the take-out line up, I was looking forward to some good eats. Ummm...yeah. Not so much.

Everything that was going past me looked fantastic. Various sushi and sashimi dishes, teriyaki and tempura - my mouth was watering. Then came my meal. 95 cent miso soup which was pretty standard, over boiled edamame and a wayyyyy too deep fried rice patty that constituted the bottom half of my sushi pizza. The presentation of the meal was fine, it was only after biting into a piece of the pizza that I realized that the rice patty was so over cooked that it was both crispy AND chewy. The sauce that was hiding underneath the salmon wasn't listed as spicy but let's just say that someone's mouth was on FIRE! That's just personal preference but at least give me some warning that I'm going to need seven glasses of water in front of me during my lunch hour. There were other dishes listed as "spicy" but not # 45 and funnily enough, it's listed as the sushi bar "special". Well, it wasn't so special to me. Far from it.

I'm not going to say that I'm not going to eat at In Japan ever again, because I will. I just need to stick to the standard sushi and sashimi dishes. Besides, if you've been in the area at noon hour, what else do I have to choose from? 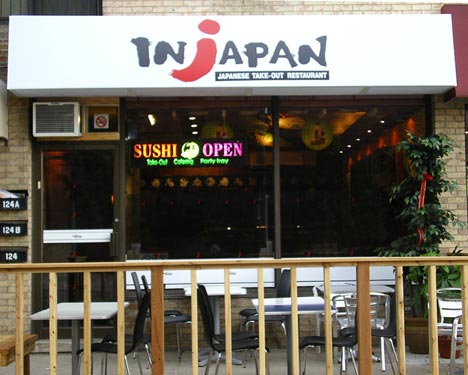