50 restaurants open for dinner in the Financial District

After the typical work day wraps up, the Financial District can feel a bit like a ghost town. Whether you're burning the midnight oil and need to grab a quick bite on a break, bring takeout back to the office or are looking for somewhere to host after work drinks, there are lots of options spread about if you know where to look.

Here's a round-up of where to eat (and drink) in the Financial District after 6 p.m.

Mucho Burrito
Open until 9 p.m. in the concourse level of Brookfield Place, this burrito counter will fuel late nights at work with hearty burritos, tacos, quesadillas and salads.

IQ Food Co.
Fuel up on salads and sandwiches at the outposts in Brookfield Place and at 18 York St., which are both open until 8:30 p.m., Monday through Thursday.

Maman
The French-style cafe on the terrace level of First Canadian Place stocks quiches, tarts, sandwiches, salads, and soups available until 8 p.m. on Mondays and Tuesdays, and until 10 p.m. Wednesday to Friday.

Ho Shim
The source for cheap sushi and Korean noodles in First Canadian Place keeps the kitchen at the express counter open until 8 p.m. throughout the week. Head upstairs to the affiliated Akco Lounge for a sit-down experience if you prefer.

Sushi Shop
The Sushi Shop can be found in the Exchange Tower at 130 King West. Monday through Friday find end of day specials available until 8 p.m.

Petit Four
This bakery/cafe in Commerce Court can be found serving up sandwiches, soups and salads until 8 p.m. Monday through Thursday.

Piazza Manna
The pizza counter has locations scattered throughout the PATH, but only the outpost in the Exchange Tower is open until 8 p.m. on weekdays.

Kupfert & Kim
Meatless and wheat-less eaters can count on locations in First Canadian Place and Brookfield Place to be open weekdays 'til 7:30 p.m.

McEwan
The gourmet grocer in the TD Centre might not be brimming with the same selection of hot foods available at lunch, but until 7 p.m. on weekdays, you'll still find an ample selection of ready-to eat sandwiches, sushi and salads, plus prepared foods that need only to be reheated. 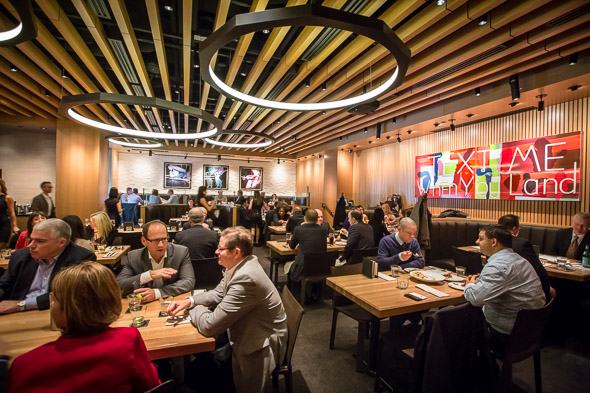 Momofuku Noodle Bar
Steaming bowls of ramen and pork buns are available until at least 10:30 p.m. at the ground floor restaurant in the Momofuku complex. Pop upstairs for a slice of crack pie if you want to take something sweet back to the office.

The Gabardine
Toast the end of the work day with strong libations like the five ounce bourbon and elderflower liquer-spiked Devereaux cocktail.The restaurant at Bay and Richmond is open weeknights until 10 p.m.

Bymark
Wind down at Mark McEwan's restaurant in the Toronto-Dominion Centre with a brie and truffle topped burger or premium plates of gnocchi and duck confit.

The Chase
Splash out on platters of raw seafood or share in a whole roasted chicken stuffed with foie gras at this restaurant in the Dineen Building. Dinner is served weeknights until 11 p.m.

Drake One Fifty
Dine on charcuterie, duck liver toasts and steak frites at The Drake Hotel's outpost in the Financial District.

Reds
Let loose after work with cocktails and couple rounds of shuffleboard at this multi-level tavern in First Canadian Place, open until midnight or later.

Richmond Station
Open with oysters and cocktails then settle in to dine on coq au vin at this bustling Yonge and Richmond restaurant open until 10:30 p.m. nightly.

SpeakEasy 21
The sleek cocktail lounge in Scotiabank Plaza is the perfect place to soak up classic cocktails along with snackable plates of beef tartare and tacos. Open until at least 11 p.m. weeknights.

What did I miss? Add your favourite evening haunts in the Financial District via the comments.

Photos of McEwan and the Cactus Club.