23 barbecue restaurants you need to try in Toronto by neighbourhood

Toronto is blessed with loads of great barbecue restaurants. The craving for BBQ might strike in an instance, but the pit masters at these fine establishments have been crafting these meals for days. Cooking low and slow turns out some amazingly tender meat, which you can enjoy all over the city.

Here's where to eat barbecue in Toronto by neighbourhood.

Backyard Smokehouse on Dupont has an extensive menu of juicy burgers oozing with cheese sauce, brisket, smoked chicken and ribs, as well as massive meat platters.

A visit to Breakwell BBQ will have you feeling like you're on a vacation from the hustle and bustle of the city. When it comes to barbecue offerings they do it all. Get your fix of pulled pork, brisket and baby back ribs.

BLCK on Dundas offers an eclectic menu of all your barbecue favourites. The menu boasts meaty eats like BBQ chicken, ribs, burgers and steak sandwiches.

The Carbon Bar gets fancy with its selection of pit-smoked eats. You can get down with St. Louis cut ribs, fried chicken, cheddar jalapeno sausage and prime beef brisket. 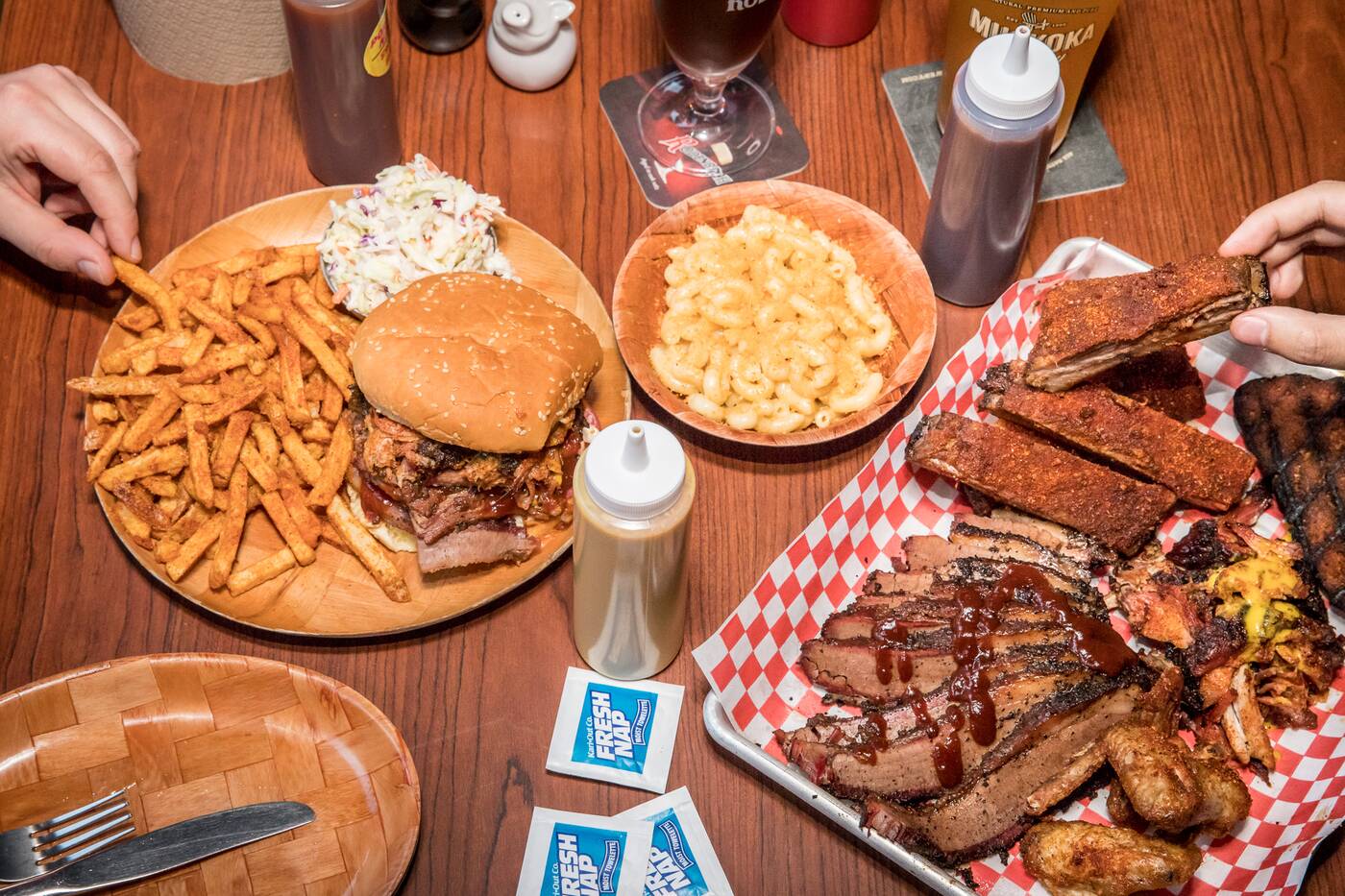 It's a meat paradise at Earlscourt BBQ. Photo by Jesse Milns.

Flame & Smoke serves up a barbecue-style menu of mac n' cheese bites, deep-fried cheesecake, cauliflower fritters and sandwiches out of a shipping container at Market 707.

The folks behind Barsa Taberna have entered the barbecue game with their  Texas-style smokehouse The BarBQ Factory. Get your fill of brisket, pulled pork, pork ribs and much more. 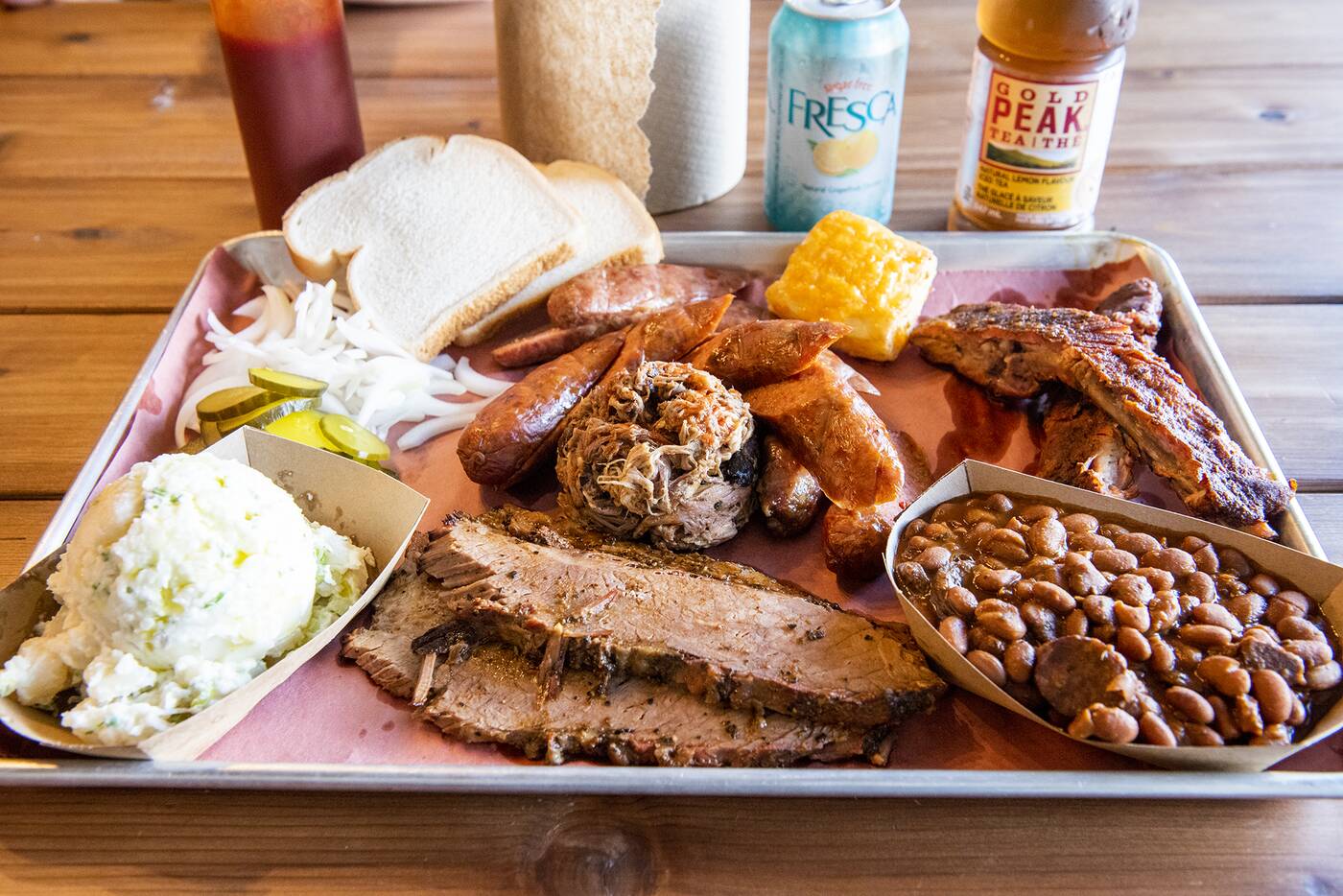 Meat & Pie Co. is a totally halal Texas-style BBQ joint that also serves scratch-made pies. So while they may not have pork on the menu their other meat offerings make up for it.

Bellows Barbecue is a BBQ joint tucked away inside Etobicoke’s oldest pub, The Old Sod. They offer smoked meats, brisket sandwiches, and comfort food sides like baked beans and cornbread. 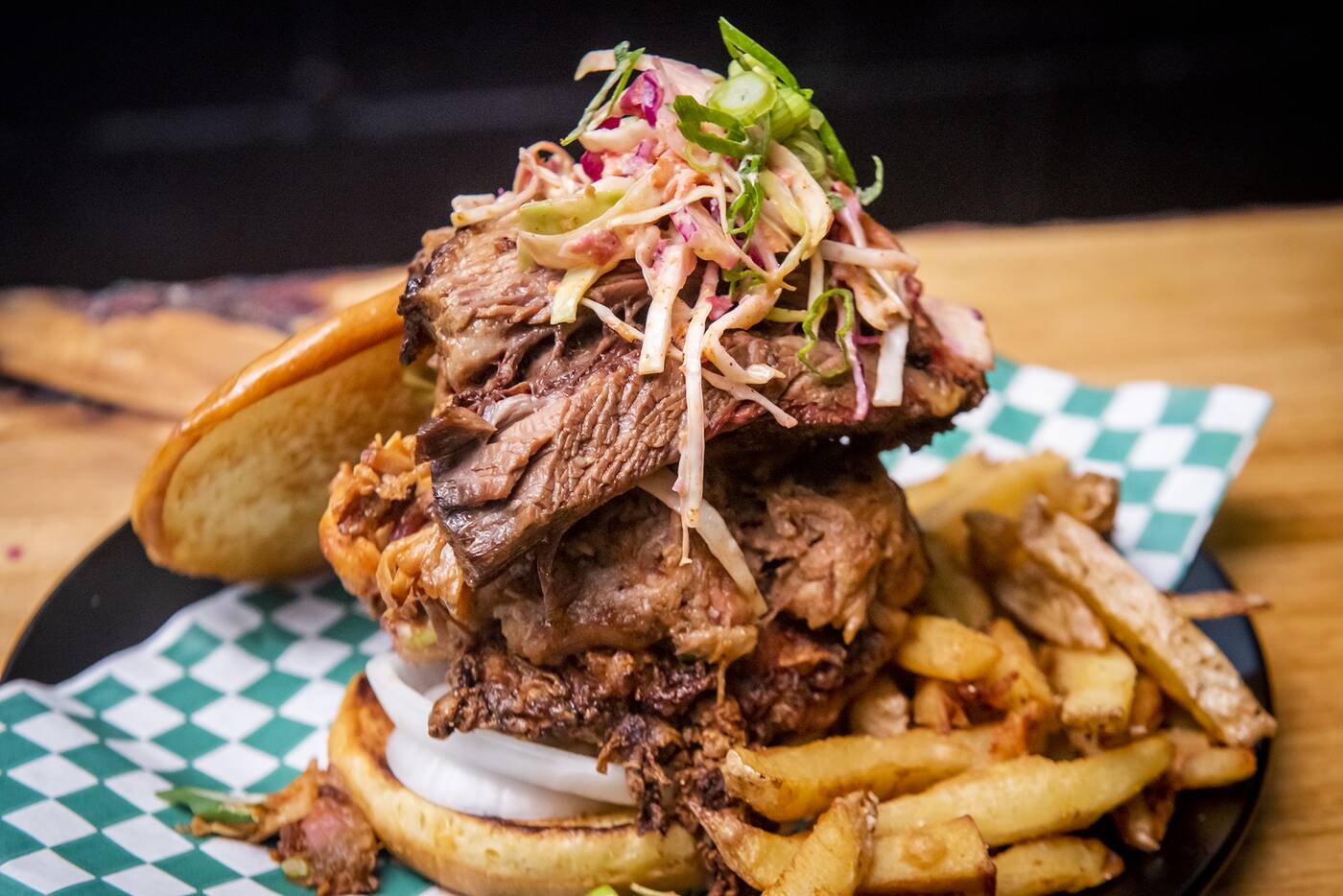 Waterfront restaurant Joe Bird is the ultimate destination for BBQ chicken in Toronto. Order up their smokey grilled bird in either two or four pieces.

Smoked chicken, wings, brisket and ribs are all accounted for on the menu at Hogtown Smoke. Bring reinforcements before ordering the platters or stick to crave-worthy sandwiches like the burnt ends on a bun.

Restaurant and whisky bar Blackjack BBQ can be found on Gerrard dishing out tasty wings, ribs, and mac n’ cheese. 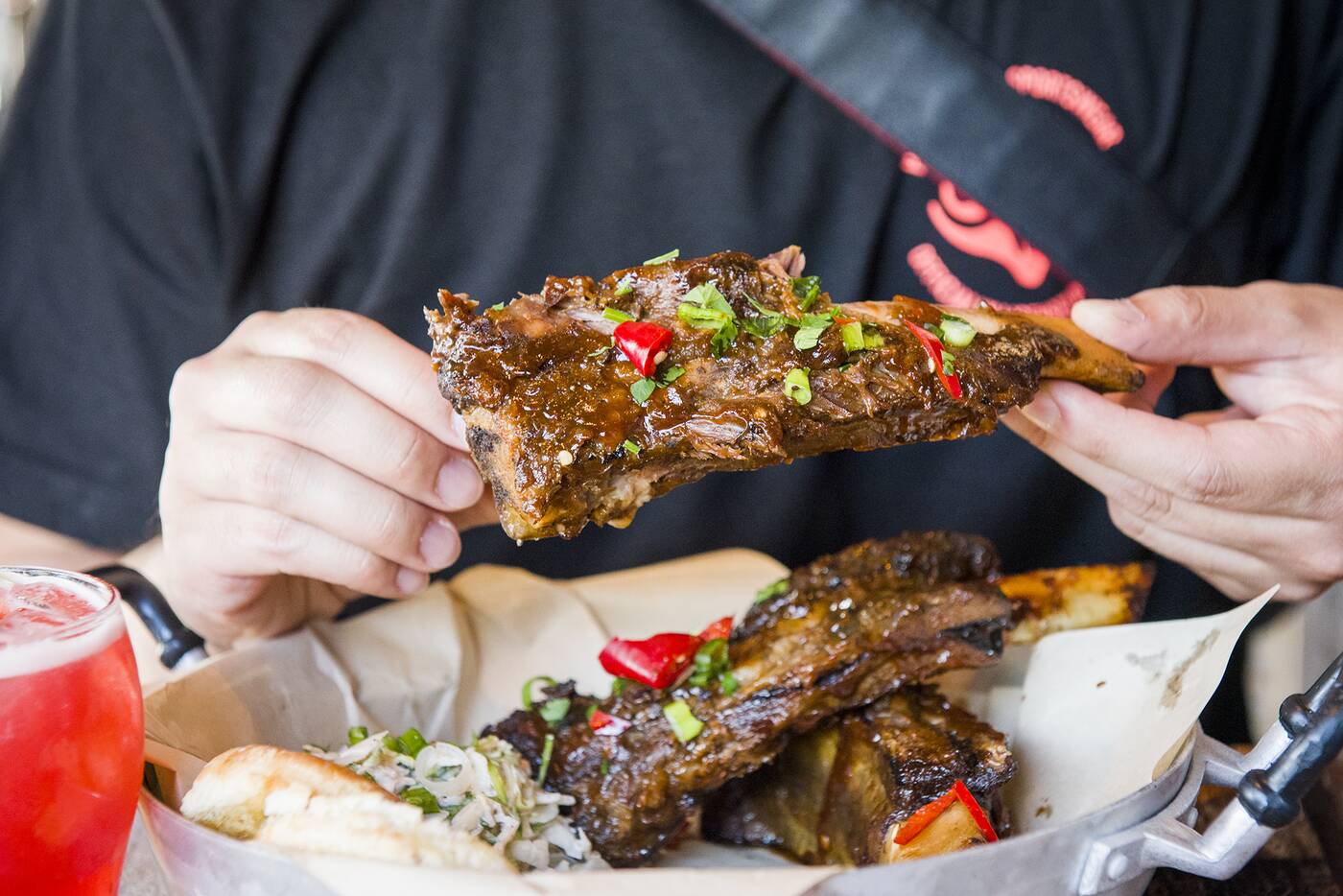 You'll have your hands full with Blackjack BBQ. Photo by Hector Vasquez.

Inside Nightowl is where you'll find Matt's Smokehouse. Pulled brisket sandwiches, chicken wings and ribs can all be found on the menu.

You can't go wrong with ordering up the Boss Hog Platter at Smokeshow BBQ and Brew. The platter consists of 1/2 lbs. brisket, 1 lbs. pulled pork, 1/2 rack of side ribs, 1 1/2 lbs. of wings and three sides. Yum!

Beauty Eats has an extensive menu of eats including Detroit-style pizzas, fried chicken, burgers and of course what you're here for, BBQ.

Meats like pulled pork, chicken, beef ribs, and baby back ribs are pit-smoked with white oak and sold by the half pound at Cherry Street Bar-B-Que. 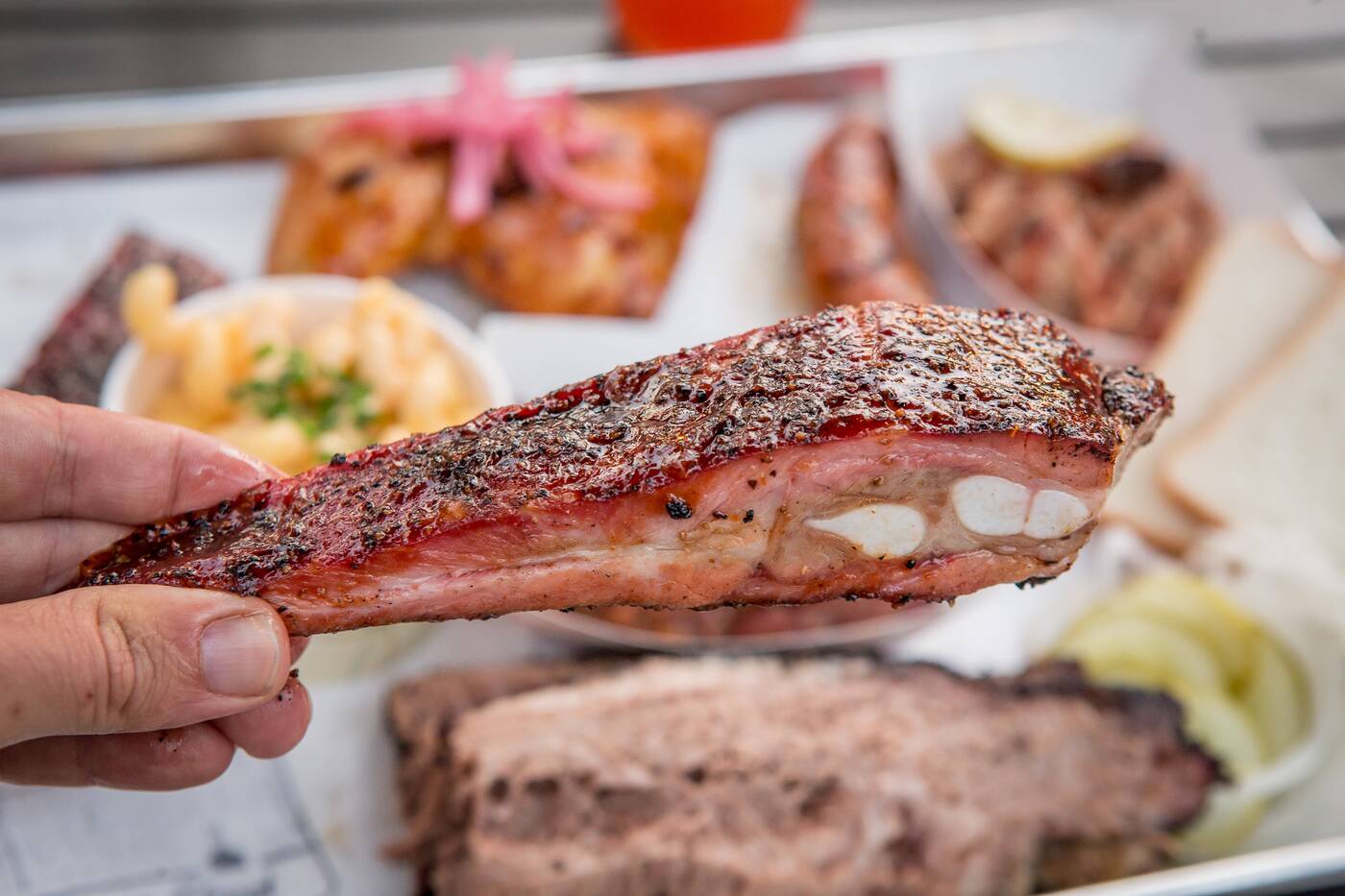 The ribs at Cherry Street Bar-B-Que are heavenly. Photo by Jesse Milns.

The sweet smokey scent emanating from Barque Smokehouse is all it takes to seduce diners. Smoked duck tacos, herb crusted racks of ribs, and smoked banger sausage are the major draw.

Beef brisket and pulled pork sandwiches are staples on the menu at The Stockyards Smokehouse & Larder. However, the real BBQ enthusiasts know that the good stuff: ribs and chicken are only available on Tuesdays, Fridays and Sundays.

Beach Hill Smokehouse is a Southern BBQ joint that offers a simple but truly phenomenal meat menu. Smoked meats here are offered by the half pound, cooked with oak wood, the most commonly used wood in Texas. 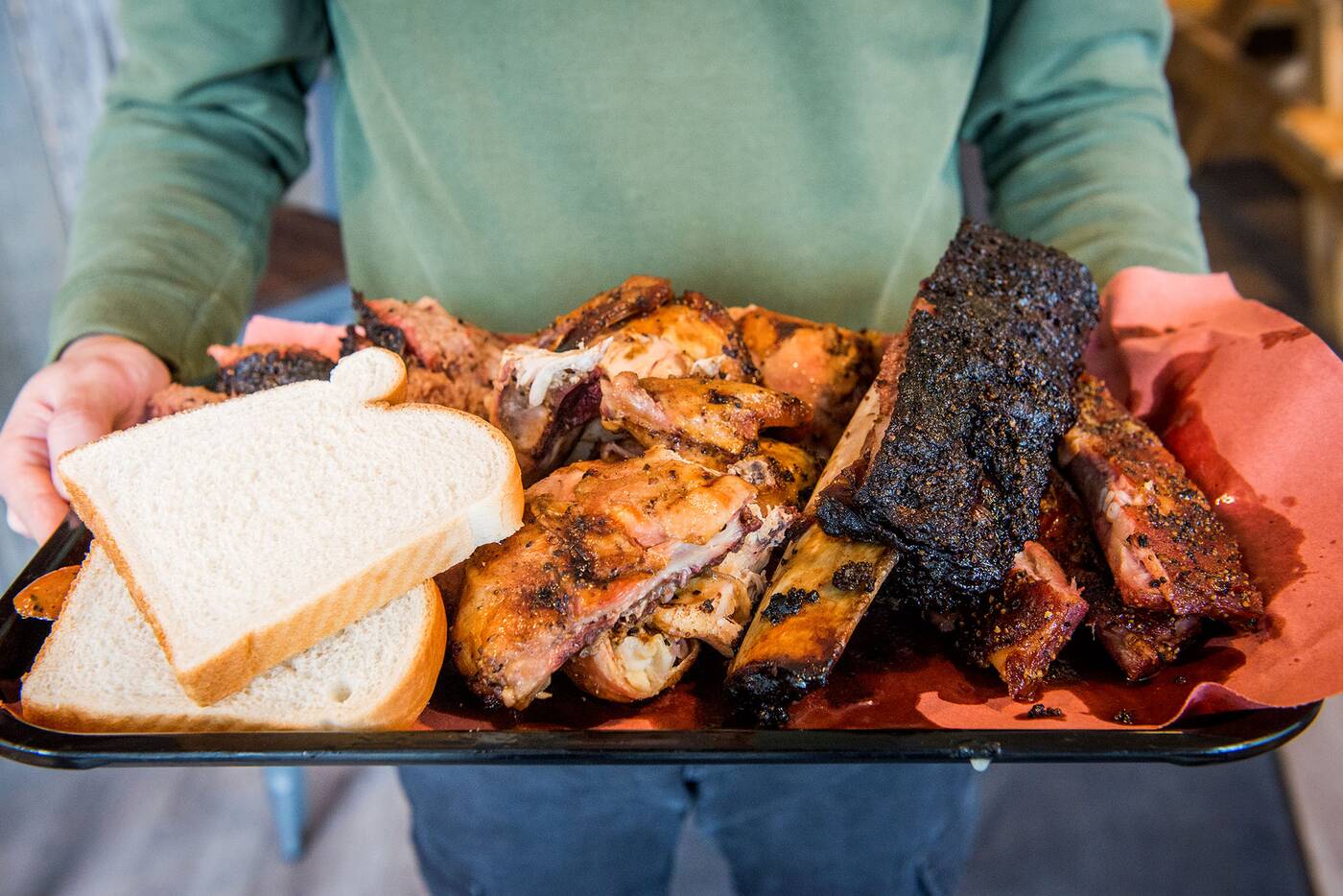 Stack Restaurant pays great reverence to regional BBQ styles of the South. Pulled pork can be had Carolina- or Lexington style, while brisket channels Texas and the baby back ribs look to Memphis.