The top 35 sports bars in Toronto by neighbourhood

Toronto sports bars provide a reminder that even though you might have your own big screen at home, there's nothing quite like catching the game in the company of fellow fans raucously cheering on the home team alongside a stellar selection of beer and snacks.

Here are my picks for the top sports bars in Toronto by neighbourhood.

The Duke of York is your average pub complete with TVs, beer and pub grub. While it might not be as sports obsessed as some, this place draws a crowd for big games especially in World Cup years when you want to cheer on England.

Keep track of the score from the bar or get rowdy in the billiards lounge at Safari. A massive big screen will ensure you won't miss a thing, while the bar is known to offer beer and food specials.

HD TVs and draught beers make McSorley's Saloon a top notch spot in this neighbourhood to root on the Leafs, Raptors or Jays.

The Gull and Firkin celebrates all sports and even hosts its own Hockey Nights in Canada. Find drink specials on offer daily plus a menu of pub grub standards.

Shakey's was originally founded by the Leafs' number 16, Mike Walton, a.k.a Shakey, and while the bar has changed ownership, it's still a mecca for sports fans.

Duffy's Tavern can be counted on to be showing a different sport on each of its four flat-screens above the bar - just note that sound might be barely audible over the jukebox.

Hurricanes is a solid spot to catch the game made even more attractive by the lineup of reasonably priced beers and all star platters of nachos and wings.

Toronto's only gay sports bar, Striker Sport Bar can be found in the village. They managed to transform a Hasty Market into a sports mecca filled with dozens of HD screens, a great soundsystem and strong cocktails.

The Banknote now has a location that resides on Adelaide East. Cheer on your favourite sports team while eating and standard pub food and sip on brews.

Find multiple TVs scattered about the interior of the Brass Taps. The pizza pub hosts parties for big games, and if you need to stretch before the 7th inning, head to the pool tables in the back. 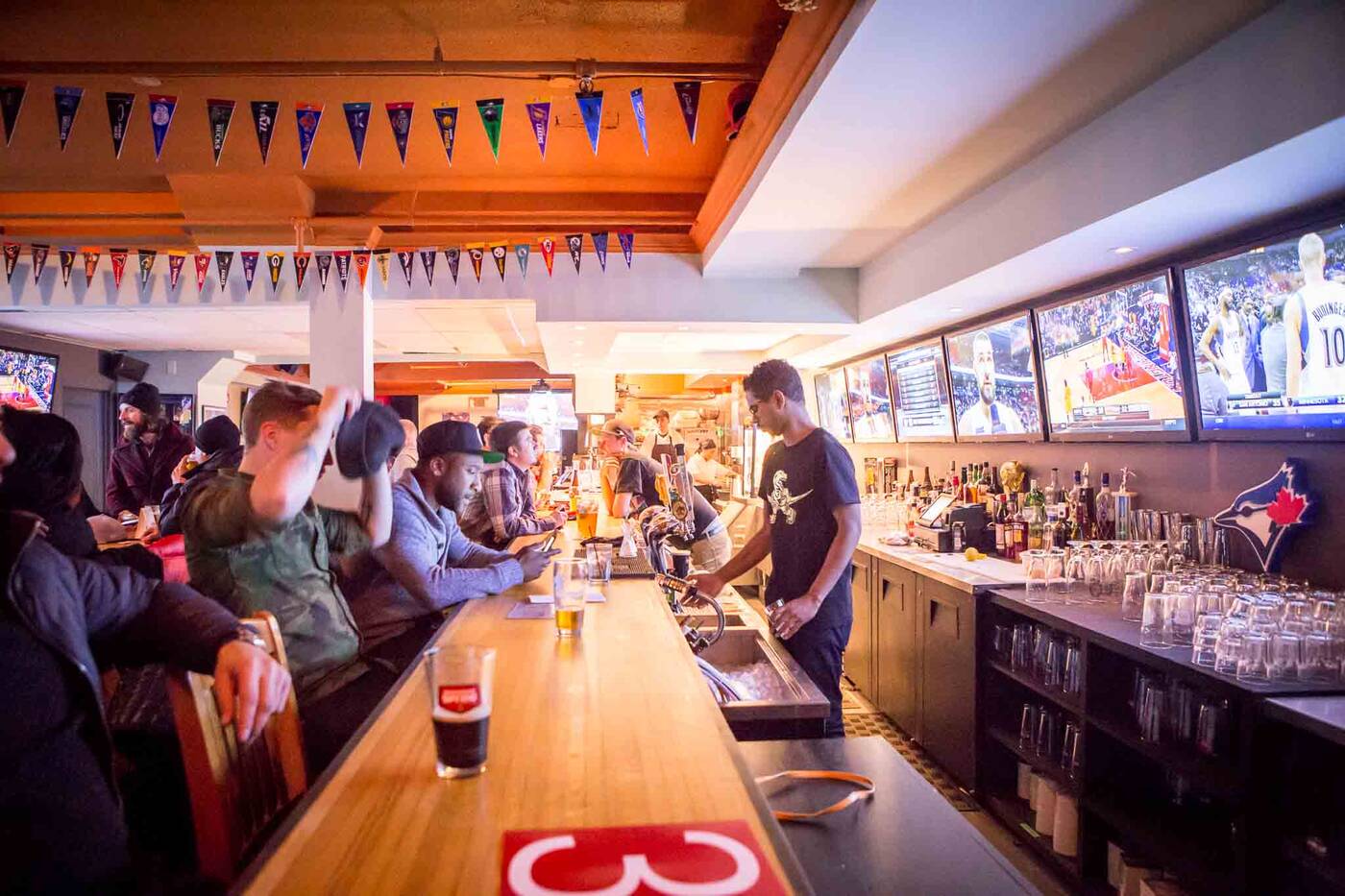 Photo by Jesse Milns at The Contender.

While many other bars in the area are stiff competition, The Contender comes out swinging. The bar covers all of the bases with dozens of screens, memorabilia, pub eats and solid list of craft beers.

High fives all around for Rally Sports Bar and Smokehouse on O'Connor where they claim to show every major sporting event, be it NFL, UEFA, NHL, NBA, MLB, UFC, or boxing. The 7000 square foot sports bar features dozens of HD TVs and a menu of slow cooked barbecue and beers.

Watch live major league sport and even some US college games at the Thirsty Fox Pub while sipping on PBR spiked with a shot of Jager. 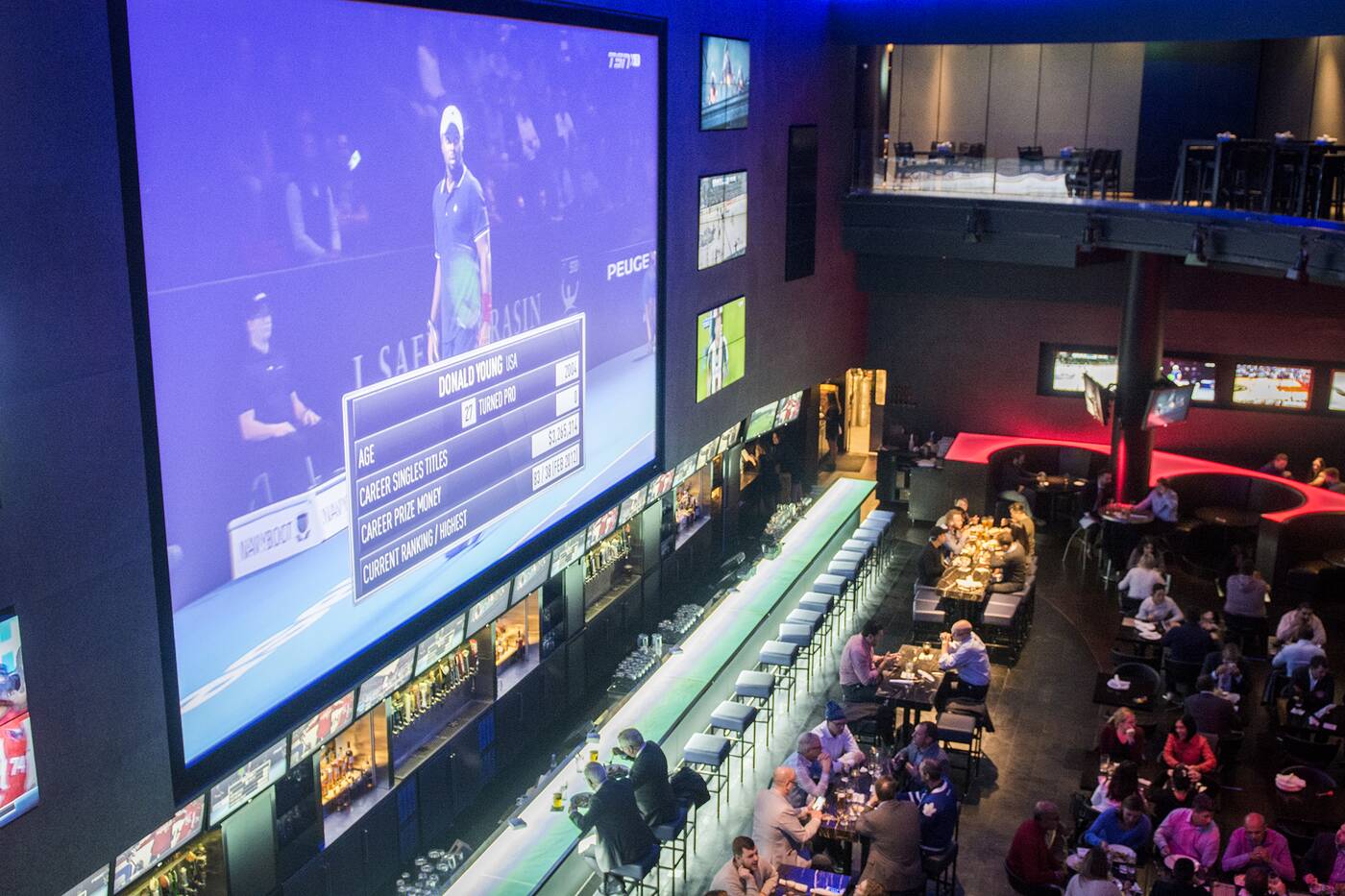 Real Sports is a sprawling 25,000 square foot MLSE-owned arena featuring 200 HD televisions and over 100 tap beers. This place is batting a thousand on the menu too, whether you're craving chicken wings or nachos.

Rows of TVs and a wide selection of draft, cask, seasonal, and even bottles from the cellar make Amsterdam Brewhouse a top destination to catch the game. The view ain't too bad either.

The Bar with No Name isn't exactly a sports bar - in fact it caters to a diverse range of interests from Magic the Gathering to Karaoke - but when the Jays are winning everyone's a fan, so count on this place for cold ones and sound-on action.

Boo Radley's is the local pub of choice in the neighbourhood. Catch a baseball or hockey game and indulge in traditional pub grub.

Watch the game on the big screen at Pacific Junction Hotel, where buckets of beer and tacos are known to go on special when sports fans are out in full force.

Wayne Gretzky's hockey-first atmosphere is just the right pitch for playoff games. Expect to be surrounded by a feverishly loyal fan base, and more than a few American tourists rooting for the opposite team. 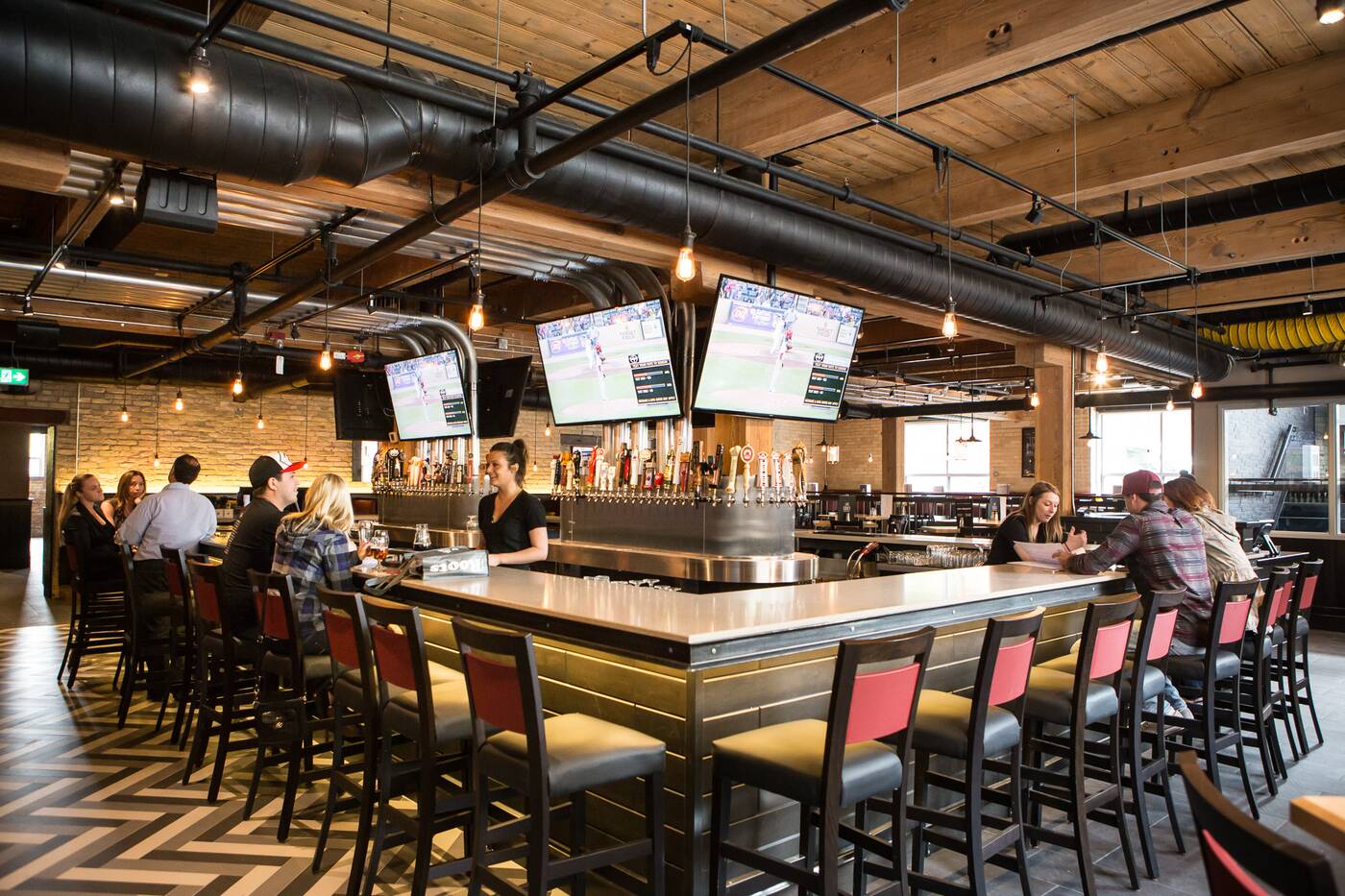 TVs and beer aren't in short supply at the Craft Brasserie. Photo by Jesse Milns.

Find the big screen TV at The Queen's Head Pub screening live sports events and the kitchen to serve up an array of wings, poutines, and comfort foods.

Crowd around the bar at The Craft Brasserie for a front row view of the game as well as easy access to the 120 craft beers on tap.

The Monarch Tavern is a neighbour mainstay where sports fans congregate to catch a game. Expect craft beer on tap, 30+ selections of bourbon and pub fare.

Red Lantern has been a staple of the Mt. Pleasant neighborhood since 1969. The pub regular plays sports games ranging from the NFL to NCAA to UFC.

Duggan's Brewery does more than just great beer. The local brewery also boats a number of TV screens so you can sip on the pint and cheer on your favourite team.

The Ballroom is a one-stop shop for sports-related entertainment of all kinds, whether that be bowling or taking in major league game action. There are TVs all over the place (even by the bowling lanes), so it's impossible to miss a touchdown or a goal.

KT Bar is from the owners behind Aft Kitchen & Bar. The east side sports bar stands for Kid's Table, boasts a bunch of TV screens and serves a menu of drinks and a snacks.

The Dizzy televises NHL, NFL, CFL, NBA, MLB, MLS, BPL, NCAA and Champions League games. The bar is home to a line up of draught beers and whiskeys. 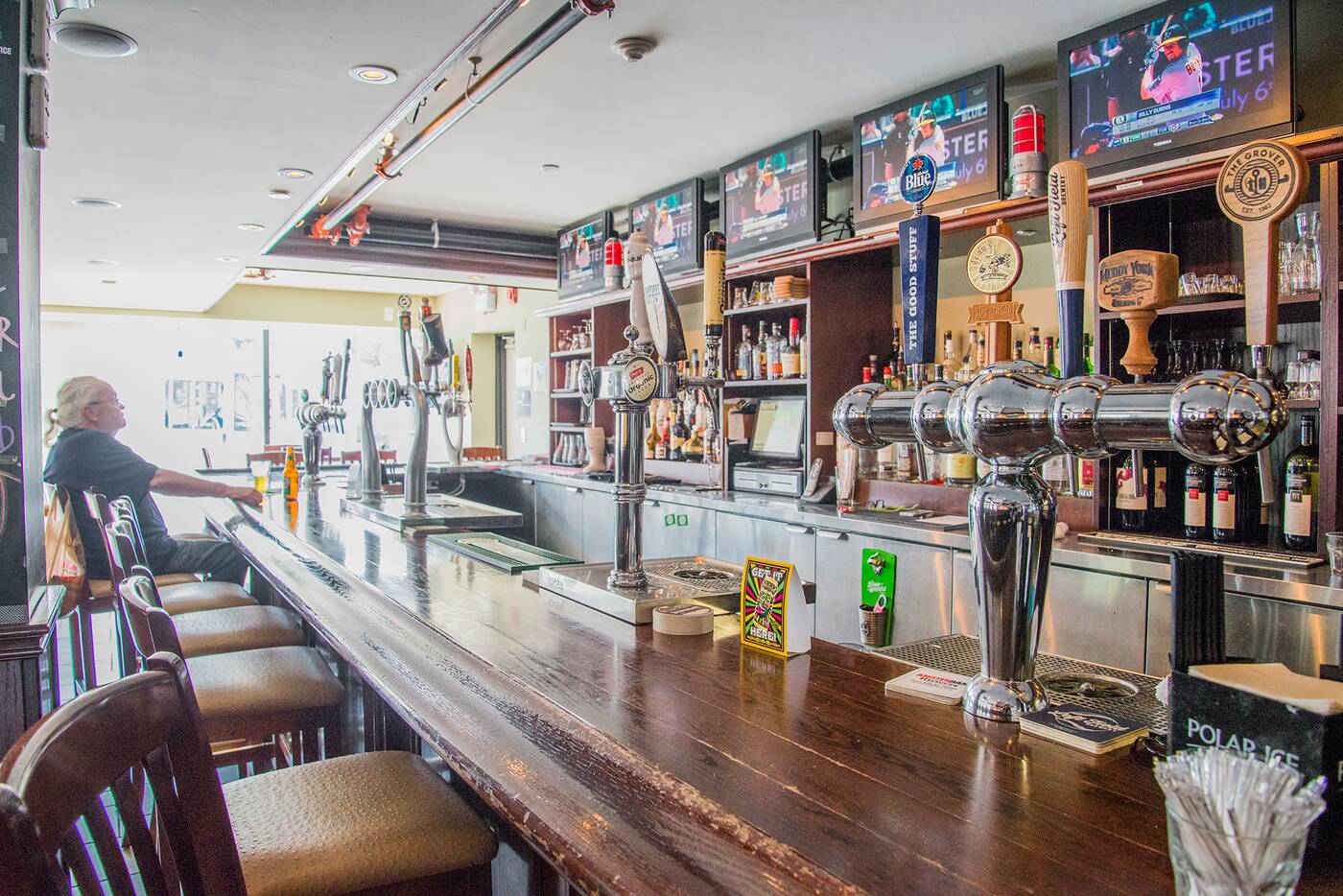 Photo by Hector Vasquez at The Grover.

O'Grady's on College is an Irish pub that's extremely popular with the U of T crowd. If you're looking to take a break from your cram session you can catch the latest sports games here.

The revamped pub The Grover is in top form this season. Grab a seat at the bar for a front row seat of all the action.

Catch the game at WEGZ Stadium Bar, the big rowdy emporium filled with wall-to-wall TVs screening every sports network. The extensive menu of pub fare features Buffalo chicken nachos and baby back ribs, plus the usual line-up of Canadian beers on draught.

Slide into a big booth at The Dog & Bear, where there's eight televisions and a 70 inch projection screen broadcasting all Leafs, Raptors, Jays and EPL games.

Duke's Refresher isn't a dedicated sports bar, but they've got an ample supply of TVs - and if you can gather 50 fellow fans, you can book a party for the big game in the upper level "Nose Bleed Lounge." The menu features over 40 beers on tap and apps like tacos and nachos.

Root on the Jays, Leafs, Raptors, and premium rugby and GAA games at the Rose & Crown. Score some pretty decent pub foods including all day breakfasts while you're there.

Scallywags is the place to watch international sports events range from soccer and rugby to NFL and MLB games.